Welcome to Nivalis, home of the mid-air collision

Flying cars seem to have become a thing of the past. Where once we were practically promised that we’d one day be soaring above the streets during the morning commute, we’ve now accepted that, yeah, maybe that’s not such a good idea. People can barely drive when they have four wheels on the pavement; putting them hundreds of meters into the air just means they have further to fall when they botch parallel parking.

But it was a nice dream. Movies like Bladerunner and The Fifth Element offer a tantalizing peek into the air traffic nightmare that is flying cars. Rows of soaring lumps of metal speeding through the air between massive neon-lit skyscrapers. It’s dazzling.

It’s an aesthetic we haven’t seen much in video games, so how about a game that is all about it. Cloudpunk is essentially Flying Car: The Game, and it knows it. 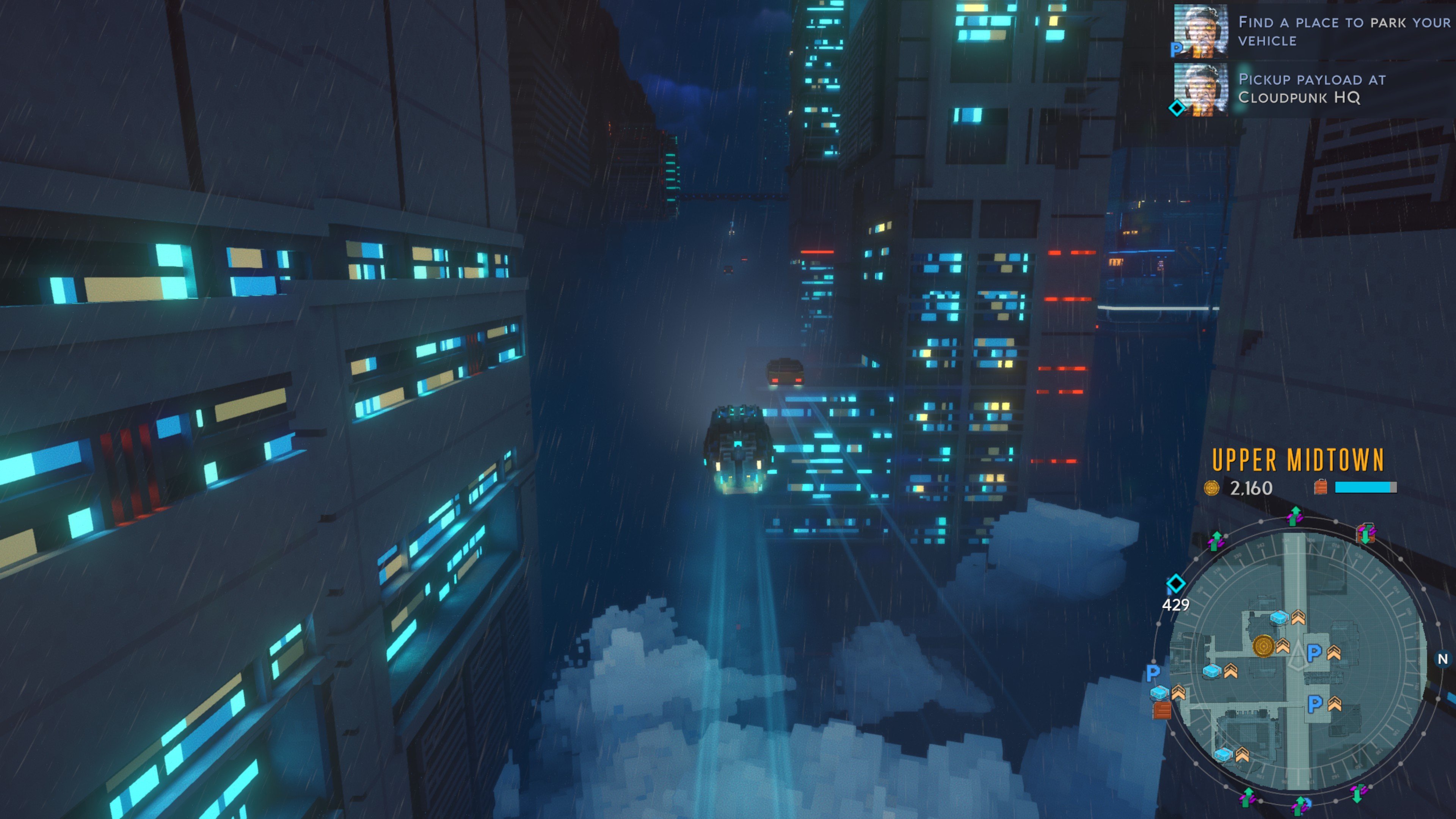 Rania is a new citizen of Nivalis, a city of towering skyscrapers and cloudy streets, where it never seems to stop raining. She’s run into some financial trouble, so she takes a job as a courier for an elicit delivery company, Cloudpunk.

There are two rules at Cloudpunk: Don’t miss a delivery and don’t ever ask what’s in the package.

Actually, we’re told those are more of guidelines, which is a good thing, because the second rule is never, ever followed.

The gameplay loop generally involves going to a location to collect a package, then traveling to its destination. It’s not always so simple, but that’s the core of it. Gameplay is broken up into two modes: flying and walking. You fly your car to a parking space, hop out, and you’re free to hit up the merchants or talk to passersby on the way to your destination.

That may sound rather dull, but it’s helped by the fact that the game is absolutely gorgeous. Not in the traditional sense of pushing polygons, but rather in its aesthetic. The cyberpunk city is well-realized, ripped straight out of Bladerunner. Giant signs glow from monstrous buildings, flying cars zoom around in careful rows, bright lights illuminate windows, the city is drenched in an eternal rain; it’s a visual treat. The city is lively and believable, even with all its fantastical elements.

Interestingly, this is all done in a voxel art style, but rather than using it to attempt a lo-fi visual style, it’s quite subtle and blends in well. You barely even notice the chunky cubes unless you get in close.

The music is also pretty spot-on, capturing the cyberpunk style quite well. Swelling synth underlines all the driving and drama masterfully. 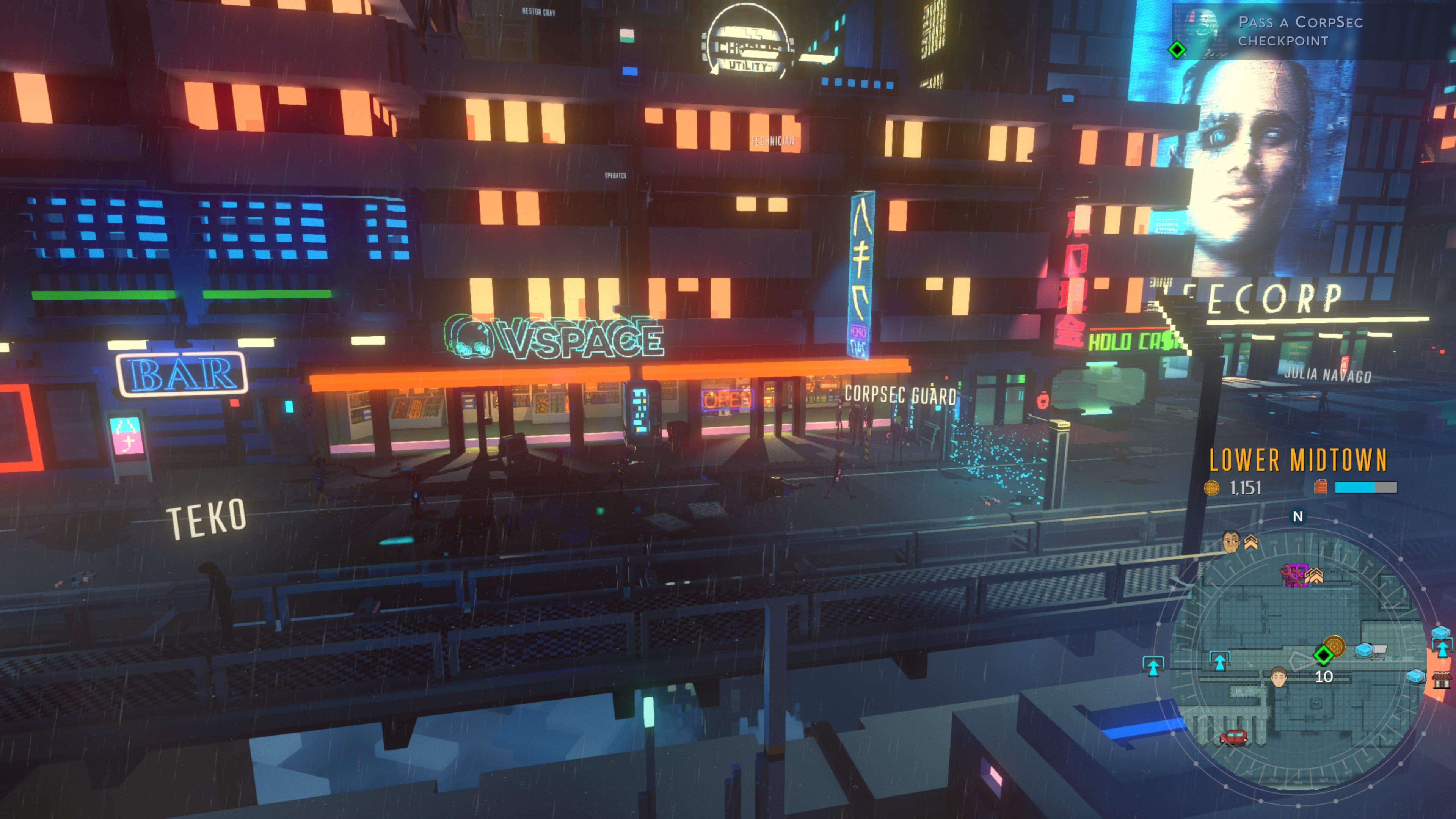 Cloudpunk styles itself as a noir story, but it’s here that it stumbles the hardest. While the lack of a compelling gameplay hook is forgiven by the excellent aesthetic, underneath is a directionless narrative that never takes off.

A major part of the issue is that none of the characters are particularly interesting, and some of them are simply annoying, but the game is committed to its world-building, so each one of them will provide you with ample backstory, whether you want to hear it or not. Everyone’s hardships are dumped on you relentlessly, and few of them are worthwhile.

Despite all the dialogue, the game doesn’t have much to say. Cyberpunk is usually a platform to examine corporate overreach, the chasmous rich/poor divide, or transhumanism in general.

The story makes glimpses of these grander themes, but won’t commit to examining them. Corporations run everything in a corrupt system, but you never see how that’s really affecting people. Rich people lord above poor people, but aside from constant snobbiness, they don’t seem to be making it worse for anyone. Automata are striving for equal rights, but that’s none of your business.

The narrative in general is just kind of limp. It lacks any tension, the central antagonist exists mostly in the background, and, as mentioned, few of the characters are very likable. It’s not completely bad — it has its merits — it’s just not very compelling overall. 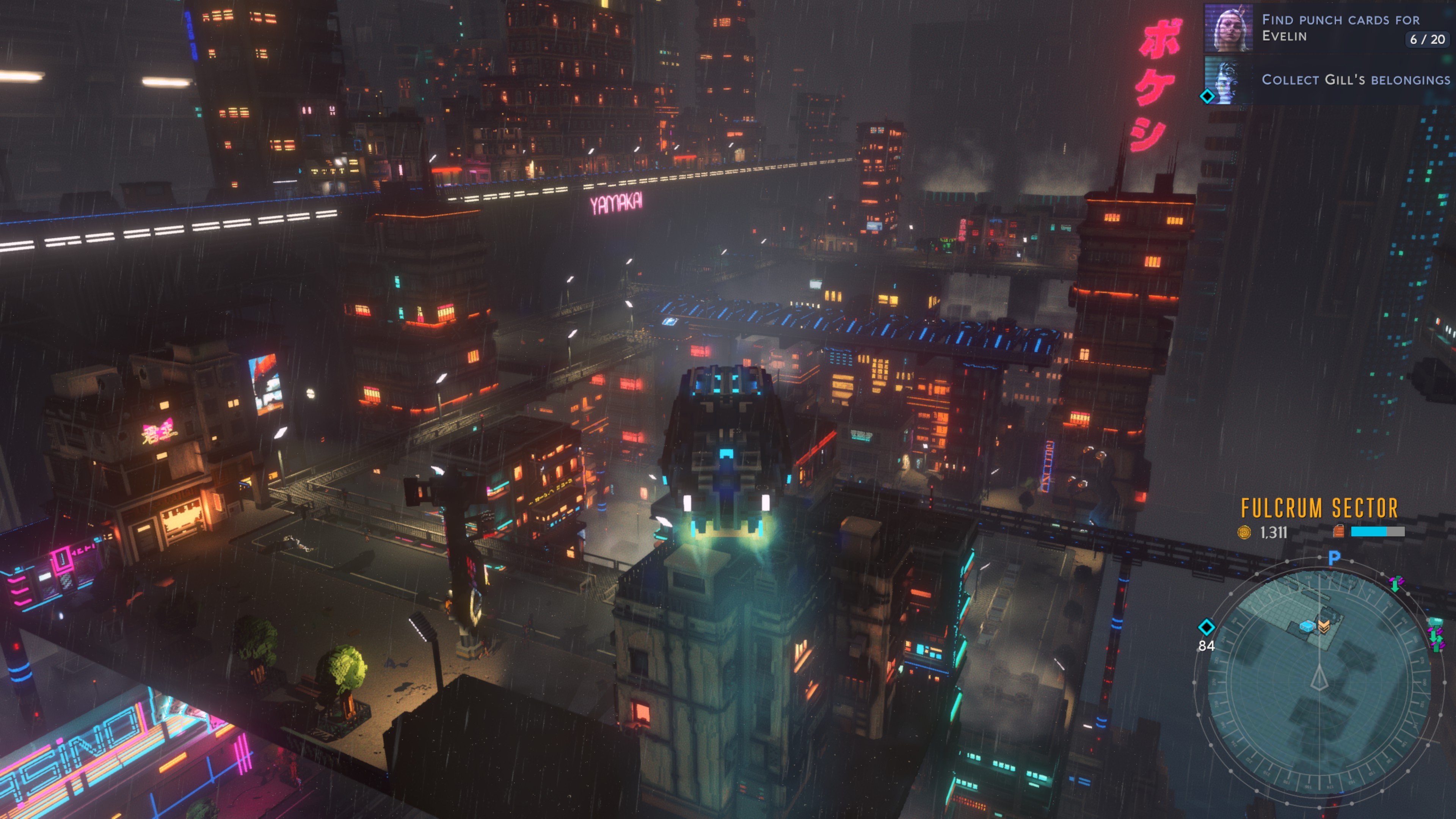 It wouldn’t be so bad if everyone’s autobiography was just noise that plays out over the hum of the engine. However, instead of giving you an objective or a waypoint for you to make your way towards while someone cries you a river, you’re often left with nothing to do but hover in place or watch the character’s idle animation while someone prattles on about how hard it is to make a living in a wondrous cyberpunk dystopia. It’s maddening.

I started off coping with this by driving around the city aimlessly, but that wastes fuel, so eventually I would just alt-tab to find something more stimulating to look at while the dialogue played on in the background.

The voice acting is all over the place, as well. The main characters are at least passable, but every once and a while you run into a nearly laughable performance. My favorite was the story’s only child character who sounded like a perfectly normal adult with their pitch shifted up. 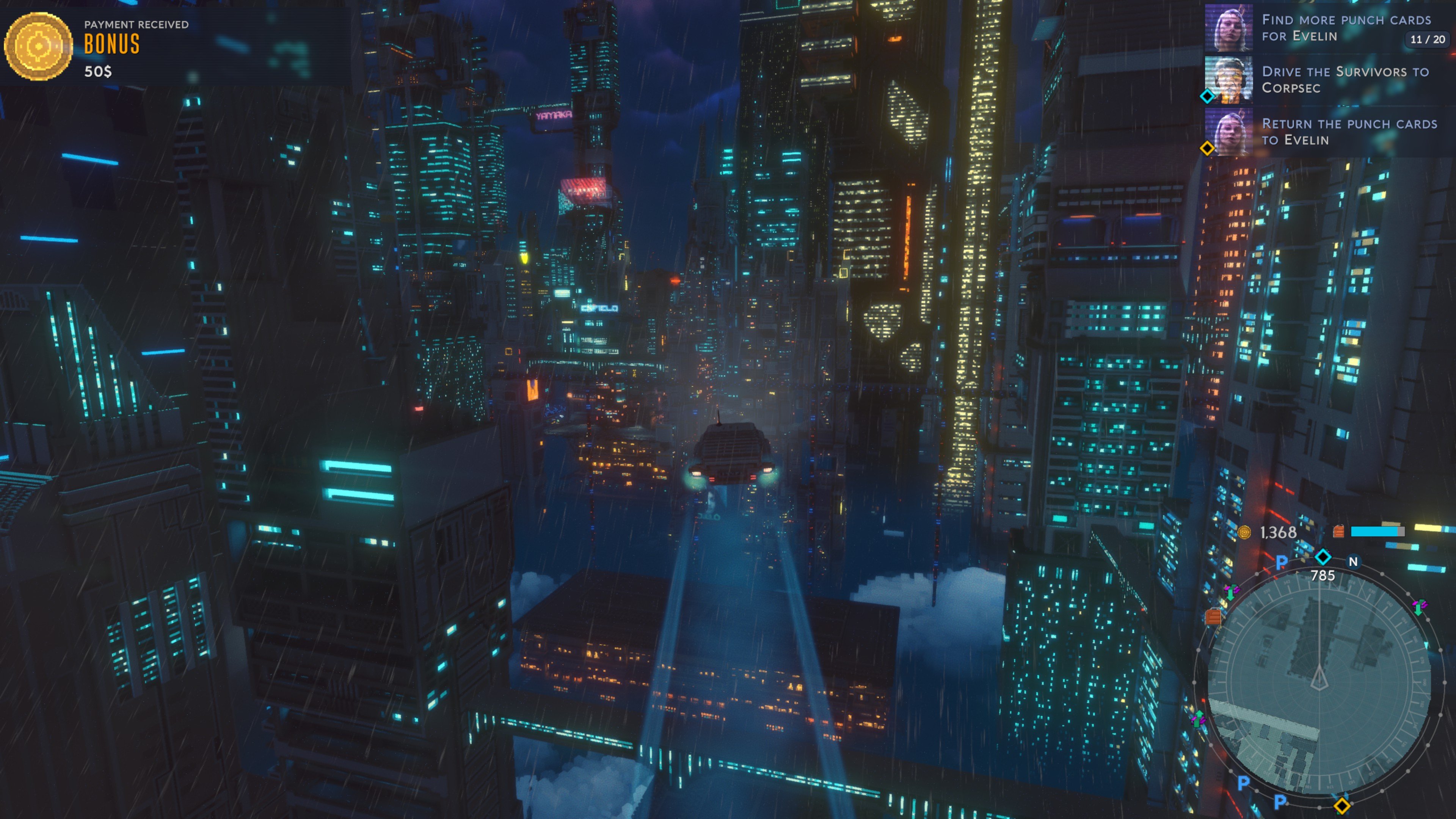 Cloudpunk is certainly a game worth seeing, but beyond that, there’s not much to back up its cyberpunk aesthetic. Flying around in your hover car is a joy, and the city is a consistently surprising visual treat, but whenever the game gets around to providing context to all of it, it stumbles.

You largely get what it says on the box, but Cloudpunk would have benefited from more compelling gameplay and a more focused story. It’s not that it’s badly designed or horribly written, it just doesn’t quite reach the clouds.