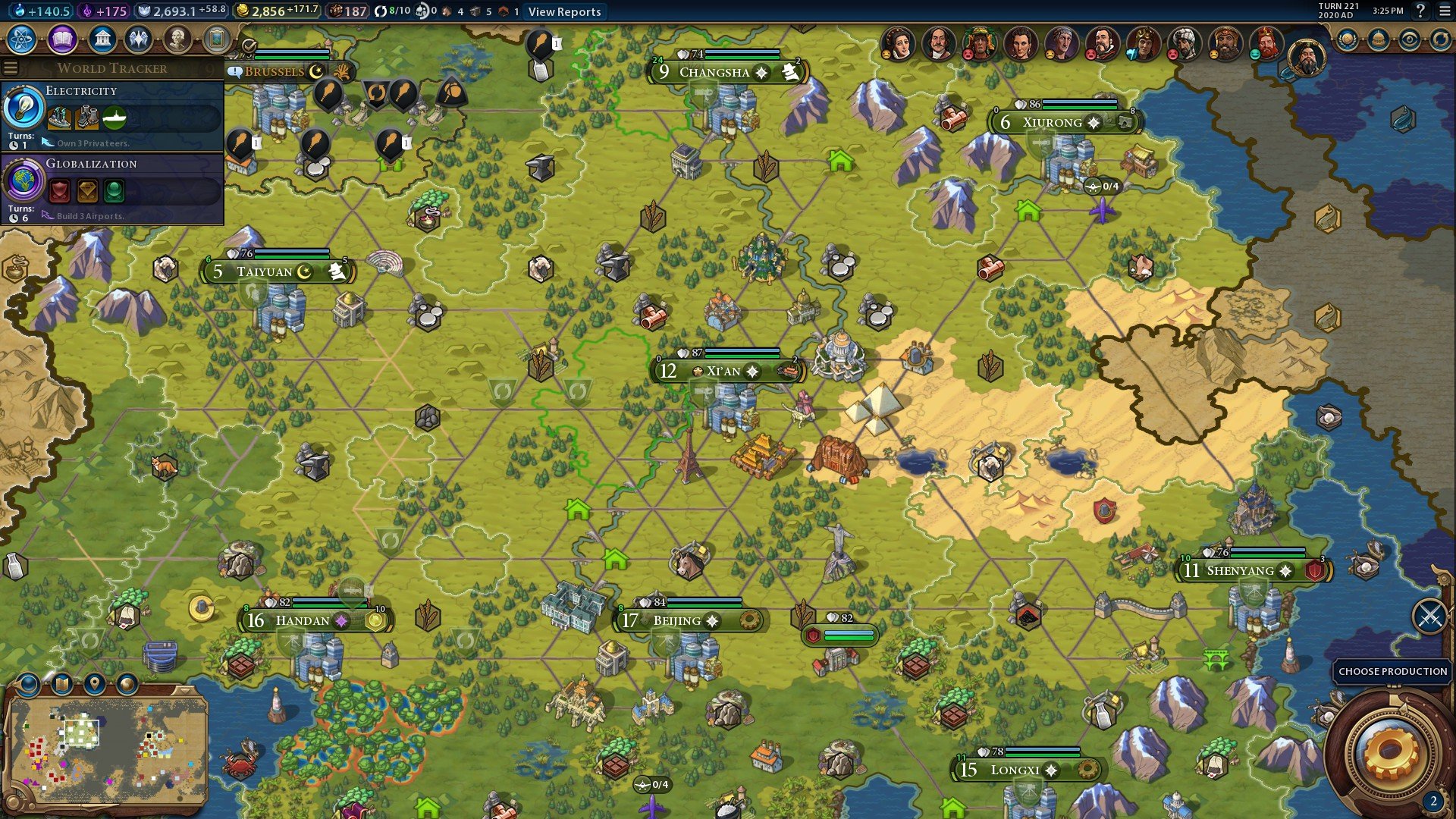 Over the course of many playthroughs and almost three full days of game time, Civilization VI is still on my mind. I’ve gone through the motion of placing districts, training an army, distributing “great” people, and building world wonders so many times that I dream about it at night. I envision how my next playthrough is going to turn out well before I even sit down.

That is the mark of a game that is truly great, but not every aspect of the package is flawless. If you can accept that scenarios are absent, Steam Workshop isn’t currently available, and that multiplayer doesn’t work much better than in Civ V, then I wouldn’t hesitate to tell you Civilization VI is worth owning. 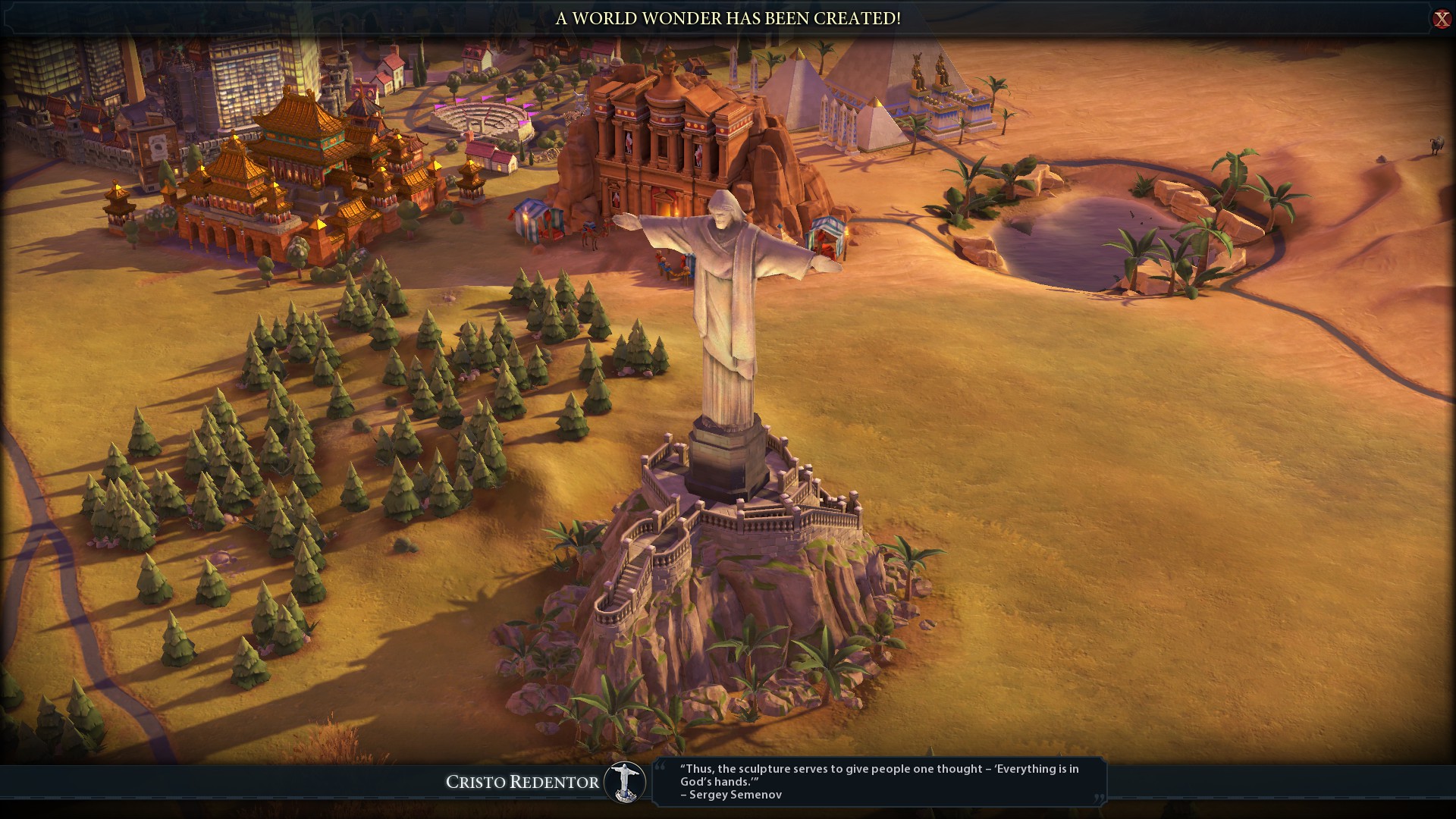 The largest change to the standard Civ formula in VI is that you can no longer build literally everything for each city. Now, districts occupy space on the map adjacent to your main city. This means that you can’t focus on wonders or only military with certain cities. If you settle in the middle of nowhere, expect your city to suffer for it.

This makes the early game a lot more important than it ever used to be. Instead of building a few settlers and plopping those down as fast as possible, you need to be aware of the resources around you. If you found a city near luxury resources, you can give yourself an early amenity boost that will keep your city happy.

The global happiness meter from Civ V is gone, in favor of a system that resembles IV. Each city’s happiness is governed by a system called “amenities.” These amenities come in the form of specific districts, luxury resources, and bonuses from trade routes. Making sure you place your city in an ideal location to get these items is vital for sustaining happiness.

The trade routes also replace the worker’s ability to lay down roads. Instead of training a few workers and setting them to automate, you now need to get traders moving between each city to lay down roads. Builders, which replace workers, also have a limit to how many improvements they can place, making them far more valuable.

For most of the civilizations you can choose, builders only have three builds before they expire. I mentioned that luxury resources increase amenities, but that will require a builder to create a plantation or farm on top of a tile, using up one of their builds. Since the luxury resources don’t increase food or housing for each district, it becomes a game of tug of war for what your city needs the most.

While this does eventually fade away as the late-game approaches, you still need to be conscious of where you build improvements in their relation to districts. Sometimes, a district (or wonder) can only be placed immediately next to the main city, which might have a farm on it. You’re going to have to kiss that farm goodbye or find another city to build your district in. Not so easy when your housing is at capacity and a neighborhood is the only way to solve the issue.

While this may sound a bit overbearing, after a few games, you fall into the mechanics at play. Through careful observation, you learn to not begin each game and settle for wherever you start. You can link more vulnerable units to an escort with military units, so that helps when sending a settler out into the wild. 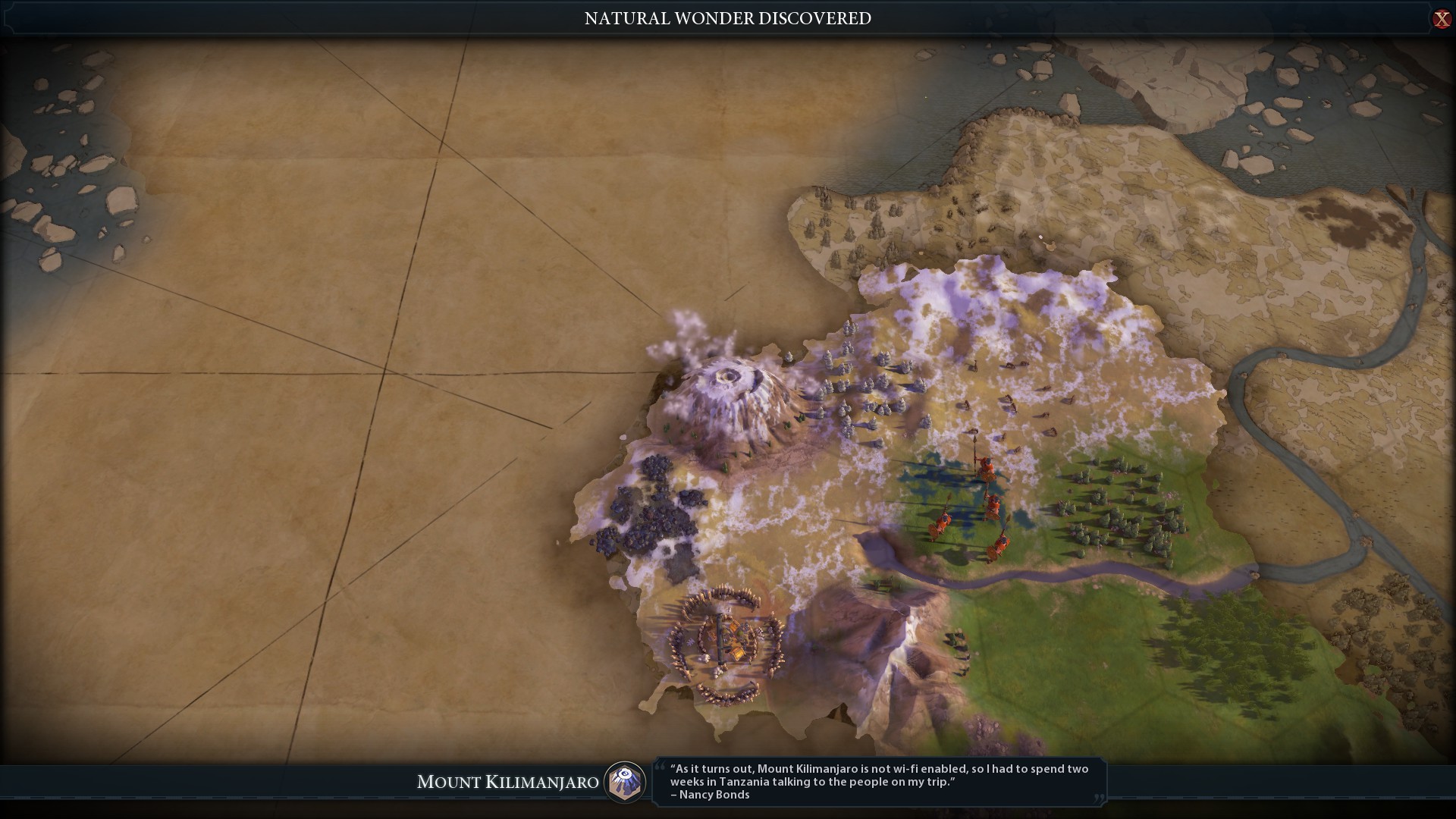 Later on in the game, you can also somewhat stack military units together. This isn’t like Civ IV where you could place an infinite amount of infantry on the same tile, but being given the ability to create corps (two units) or armies (three units) helps with decluttering the map in the late game. Having a damage boost is also a great bonus.

Surprisingly, opponent AI isn’t what you’ll have to worry about. Surprise wars happen a lot less frequently and there is a new system in place that reveals agendas that other leaders have. Through actions you take, you can discover what they value about the world, so you can take steps to mitigate pissing them off.

Barbarians, though, are ruthless. If you simply kill each one the moment you see them, you might be setting yourself up for failure. Barbarians utilize scouts to a terrifying degree and leaving any city undefended will usually result in a small army coming your way. If you choose to follow the scout back to his base, you can cut off reinforcements before they grow into a major issue.

For a lot of my games, though, I’d still have them roaming around in 1985 AD. Can you imagine having electricity, CDs, and sports cars with random barbarians traveling the earth? They’re a damn persistent thorn in your side, so make sure to deal with them as soon as possible. 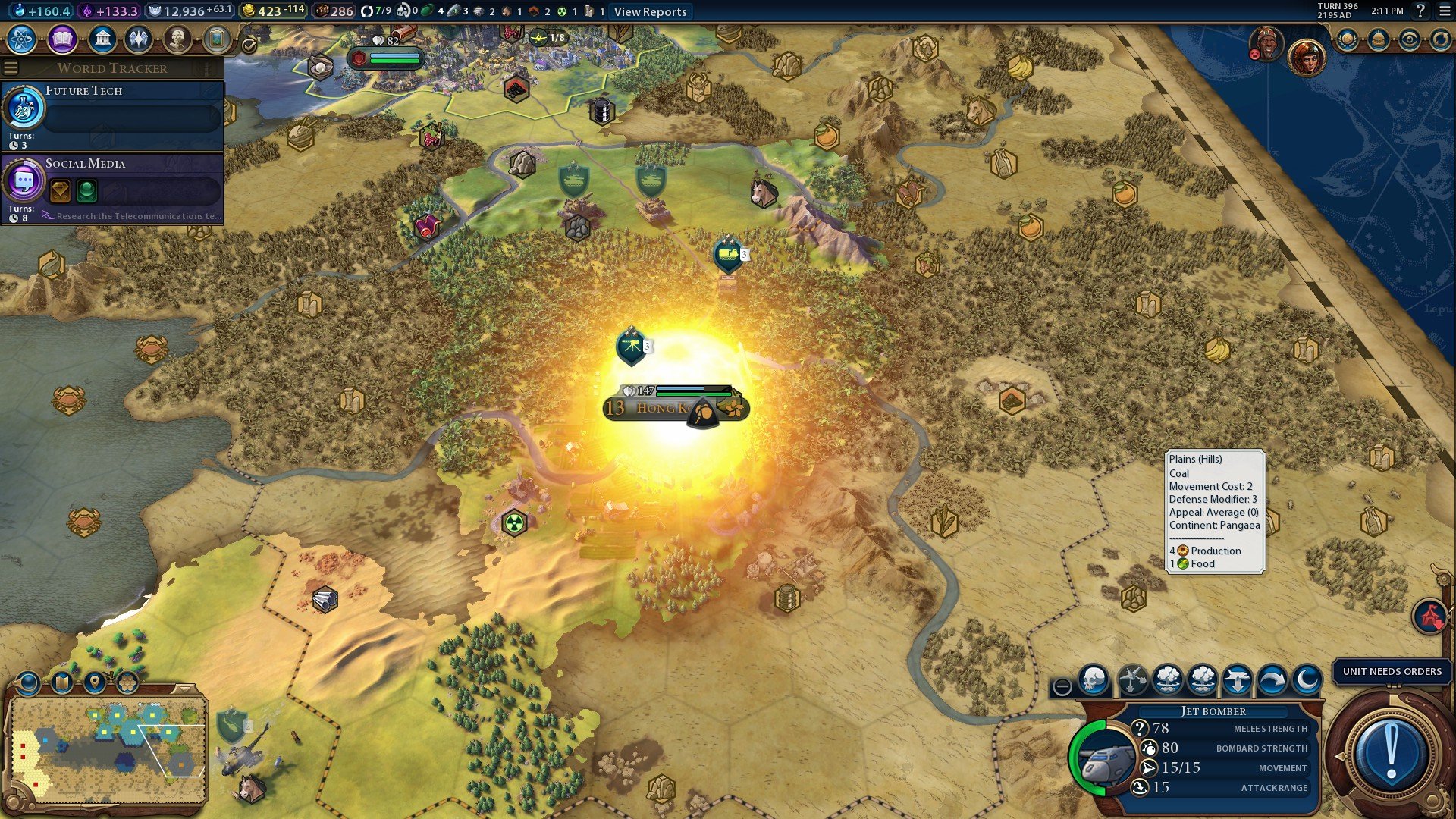 The only way in which your opponents will be a nuisance is through religion. For some reason, most of the AI focuses on creating a ton of missionaries and apostles, which tends to foul things up towards the middle of the game. To win via a religious victory, you need to convert every empire in the game to your religion.

Thing is, if your cities get converted to an opponent’s belief, you can no longer create missionaries or apostles of your founded religion. While that makes sense, in a realistic sort of way, it ends up robbing you of counter-measures for when the shit hits the fan. It is nice and all that there is “theological combat” for religious units, but when they die (which happens too fast), you end up losing your cities to another belief.

As such, I’d recommend turning off the religious victory condition. Also, if you start in the atomic era when setting up a game, you literally cannot win through religious means (something the game fails to mention). I’m guessing that is mostly an oversight, but why would you allow me to lock victory to religion and then give me no way to utilize religion?

I’m happy that more care was given to a system I thought was amazing in Civ IV, but it seems like Firaxis still doesn’t know what to do with religion to make it viable. Unless you hone in on creating holy districts and recruiting a great prophet before everyone else, you aren’t going to win via religion. 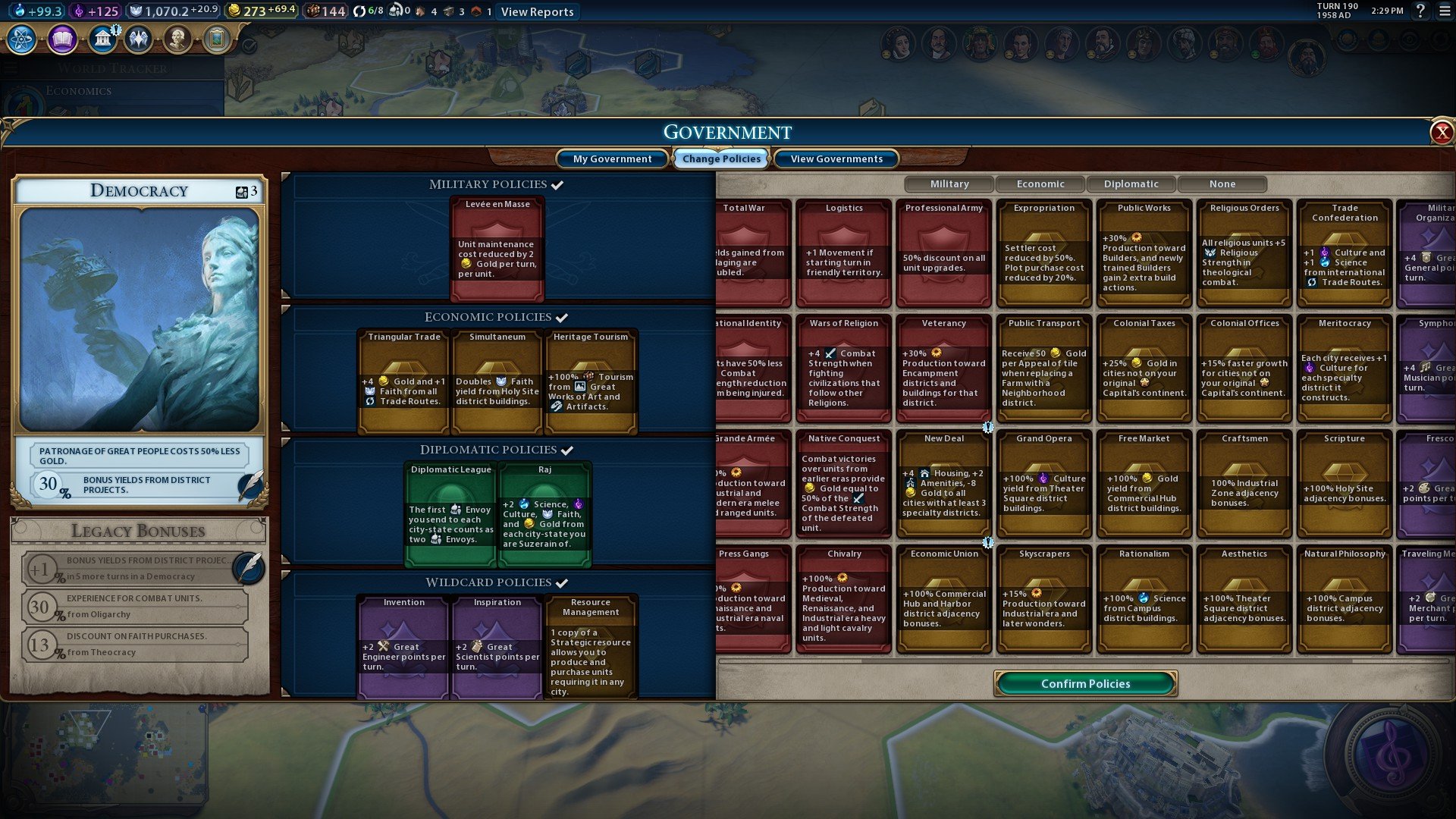 As for the other victory conditions, diplomatic wins are no longer in the game. While those were often too easily obtained in V, I do kind of miss their absence. The space/science victory feels harder to come by, but you can often piggyback off of the benefits of culture to further your science research. Having a civilization with a strong culture will boost you along the civics tech tree faster, which definitely provides bonuses to unlocking science-related buildings.

Mentioning boosts, there are small objectives tied to each of the science and civics tech that let you create “eureka” moments for unlocking them faster. If you take out a barbarian with a slinger, you get an advancement towards an early-game tech. These don’t stop once you reach the late game, either; up until the modern era, you can constantly build, explore, or destroy things to grant boosts.

It gives short-term goals that create long-term benefits and can even be the deciding factor in a science victory over the AI. When playing on difficulties past Prince, you’re going to need all of the advantages you can get (since the AI is given an unfair edge).

Espionage makes a return from Gods & Kings and is fairly robust. You can place spies in enemy cities to steal boosts for technologies, siphon funds, or sabotage different districts. Like the boosts for gaining early-game advantages, using spies in the late game can cut off a civilization’s ability to even launch their space program. Thankfully, you can counterspy your own districts, so you can have backup for when the AI tries to ruin your game. 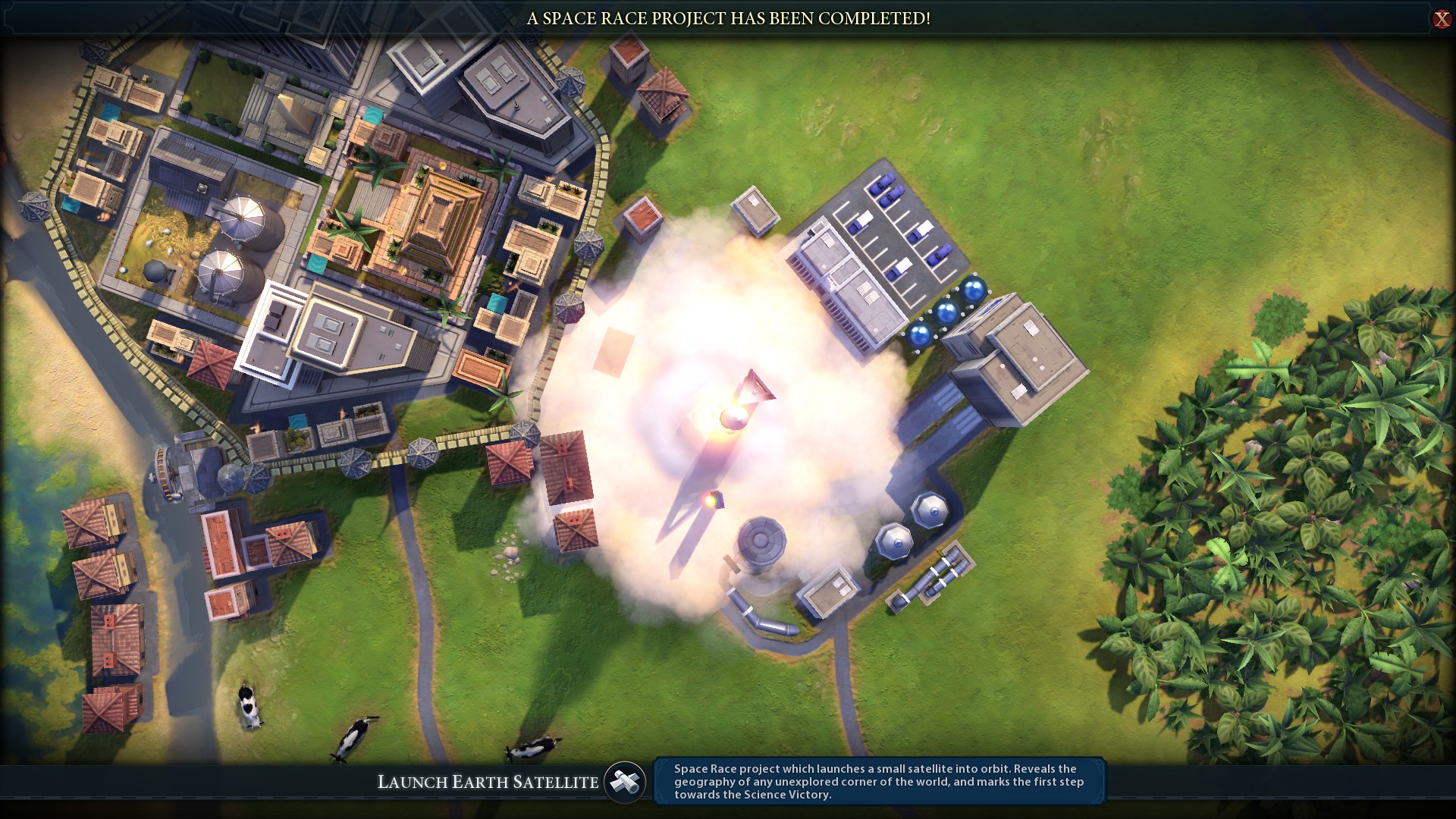 In fact, a lot of features from the expansions to previous Civ games are present in VI. This leads to me think that we aren’t going to see much in the way of traditional expansion packs for this latest entry. What more could you possibly add, apart from going the route of Beyond Earth and adding space worlds? Civ VI is so feature packed that it can be staggering for anyone who hasn’t kept up with all of the previous updates to the series.

Sadly, those features don’t extend to supplemental game modes. Scenarios are completely absent, apart from multiplayer “mods” you can select. If you wanted to recreate the barbarian invasion of Rome or the expansion of the US into the west, you’re out of luck.

Steam Workshop is also not implemented yet (and I can’t find anything about official support). Mods are allowed and can even be used in multiplayer, but you currently won’t have an easy time getting them to function. The in-game mod browser from Civ V was a godsend in the early days and it only became better once Steam expanded how mods work with their platform. To not include this from day one feels shortsighted, but a free update can definitely fix that.

There is also the looming threat of DLC that hasn’t been given a clear definition for Civ VI. The deluxe edition claims it contains four post-release packs, but nothing has been chiseled out for what those might be. If you pre-ordered the game, you were given Montezuma for use in the main game, but one extra leader doesn’t feel all that substantial. 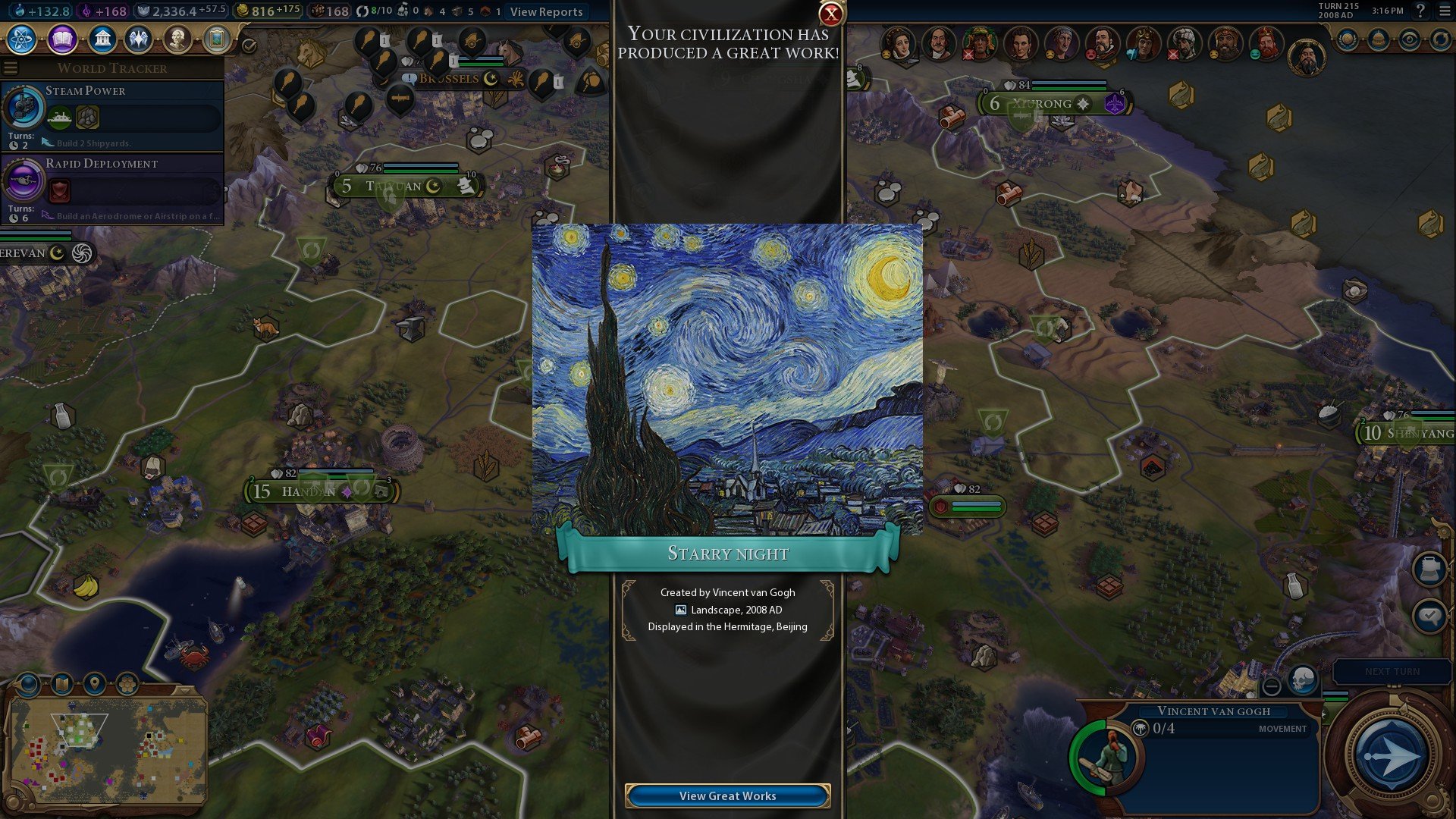 For the life of me, I can’t get a multiplayer game to work. I did manage to join one, but everyone left as soon as the first turn was over. From what I can tell, the game utilizes actual turns instead of the countdown timer that was present in Civ IV. There is also a double-speed game mode (dubbed “online”) that should let you blast through games with your friends, but I can’t manage to play through an entire match.

There wasn’t any noticeable lag, so that is a plus. Still, with Civ VI being one of the most popular games on Steam a few days after launch, why are the servers so barren? Maybe my name carries negative clout, but I’d like to see more customization available in the server browser to eliminate people who are going to kick me (like adding password support).

As for performance, the game runs quite smoothly. As you progress into the late game, there can be a little bit of stutter, but the graphics menu has a ton of options to fix any issue you may encounter. You can also cap the frame rate, which is neat for those who want 30 FPS. 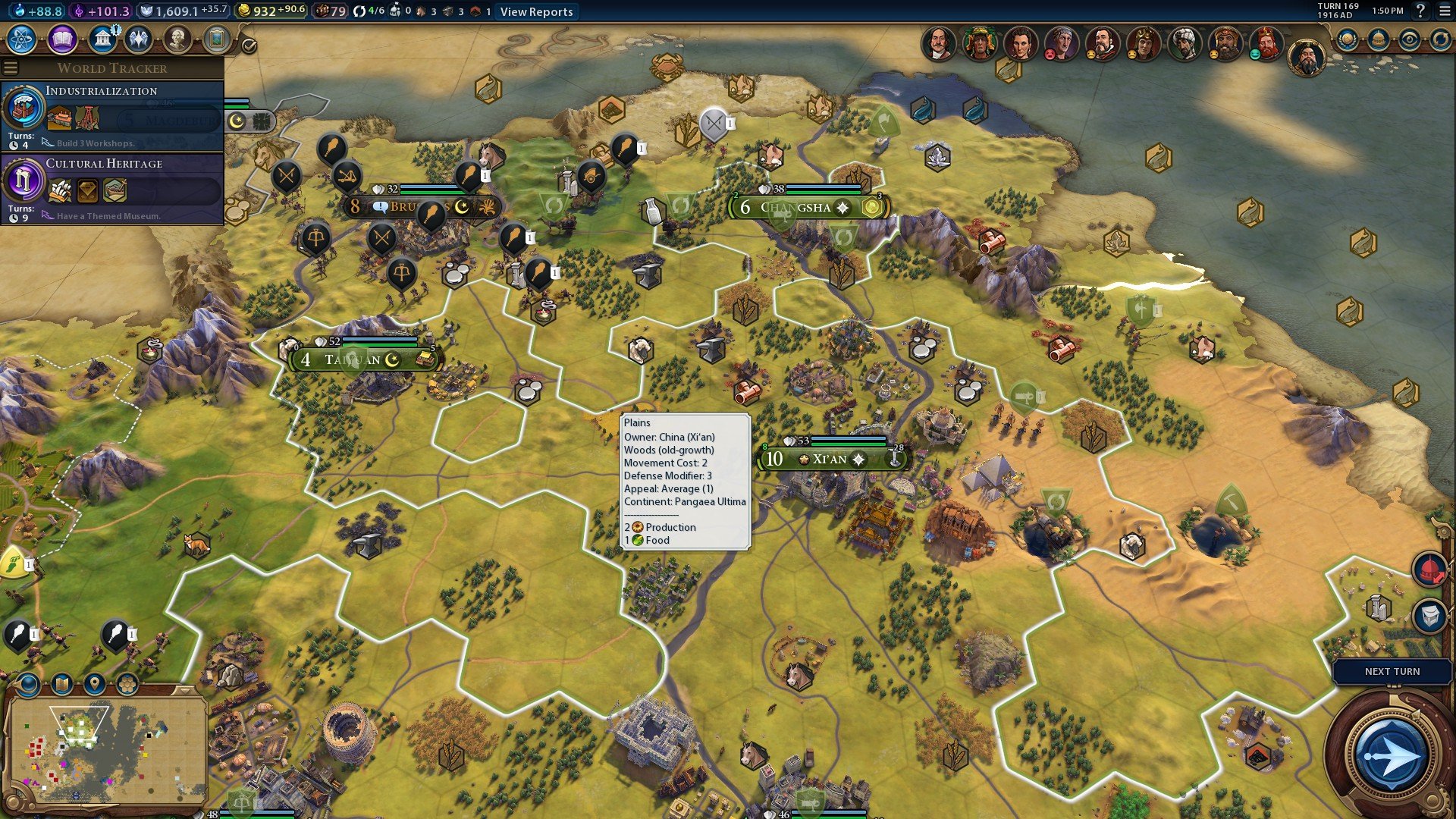 The only question that remains is whether Civilization VI is worth your time. My answer is a resounding yes. There are some shortcomings in the package that dampen my enthusiasm a bit, but I haven’t had this much fun with the series since my high school days playing IV.

The old Civ mantra of “one more turn” is stronger than ever. The additions make for a much deeper strategy game and the inclusion of most of the features from previous entries makes for a remarkably well-rounded launch. It will be interesting to see where Civ VI goes, but I have a feeling there won’t be nearly as dramatic a change as Civ V saw.