He’ll be comin’ round the mountain

When Choo-Choo Charles was first revealed to the world, I got that too-good-to-be-true feeling. Sure, it looked like a lot of fun, but how do you build an entire game around fighting an evil train? I was then reminded that I thought the same thing about Happy’s Humble Burger Farm, which coincidentally was released about one year ago. Will Choo-Choo Charles become my next horror obsession?

But that’s not as damning as it seems. In fact, if there’s one thing I really respect about Choo-Choo Charles, it’s that it knows exactly what it is and is focused on delivering that. And it does. You play as an archivist slash monster hunter, which is the absolute best profession I could ever imagine. What papers do I need to land that job? How does it pay? If Choo-Choo Charles is anything to go by, I wouldn’t even need to supply my own equipment, because it’s already there on this isolated island.

You’re summoned to the island of Aranearum to deal with what’s described as a monster that is “half train, half giga-spider.” They named it Charles, which is a pretty respectable name to give a terror beyond the veil of madness. The miners of the island have already done the legwork on planning Charles’ demise, they just need someone crazy enough to pull it off.

Upon arriving, you’re equipped with a train and let loose. Your goal is to travel the broad-reaching tracks of the island and meet up with the various NPCs. They’ll give you the keys to where Charles’ eggs are being held, supply you with scrap metal to upgrade your train, and load you up with weapons to help keep the monster at bay. That’s the whole of it, but it’s not going to be easy, because Charles isn’t the only monster on the island, and a whole load of cultists would rather you didn’t stop him.

I don’t know how great I feel about shooting a train, especially one that is set up on better infrastructure than most municipalities could ever dream of. However, joining the cultists isn’t an option, so I guess it’s hunting season. At least Buster Keaton would approve.

Also, there’s Charles. He roams the island too, and as you travel, you may hear his distant whistle as he bears down on your location. Provided you’re in the safety of the iron womb of your train, you can fend him off. Unfortunately, you need to leave that safety rather often, if only to switch tracks. Listen for that whistle; his hellish Choo-Choo that foretells his arrival. He’s the little engine that could… kill you.

Largely, encounters with him are kept to a minimum, which is a great way to add to his mystery. Chasing him off isn’t all that difficult, so having him in the spotlight every few minutes would greatly reduce his perceived threat. The game’s dark and gloomy atmosphere is a great look for him, as well. He weaves through the trees, chasing your tail with unwavering determination. And that’s it. All in, Choo-Choo Charles ran north of 2 hours for me, which is long enough that you get your money’s worth, but not so long that you realize there are no tricks up its sleeve.

The furthest you really get from this core gameplay is sneaking around cultists, but most of the side-quests just involve going from point A to point B and sometimes going back to point A. It works as a framework but doesn’t do anything too inventive. It rewards you well for engaging with the content, so there’s very little threat of disappointment. 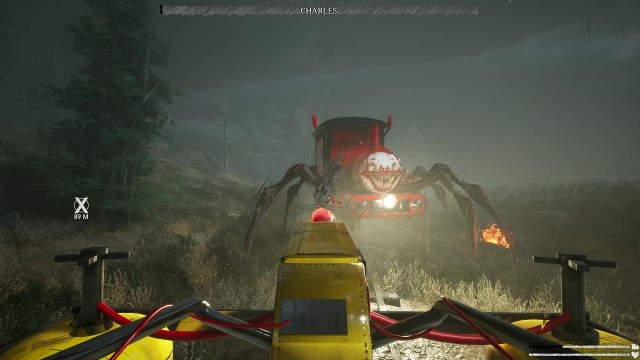 Simply working seems to be the aim of Choo-Choo Charles. The core gameplay was already established, so actually turning it into a complete package is ambitious as it gets. The graphics work, but they don’t want you getting to close. It’s a mix of gathered assets and models that have textures that look like placeholders. A cartoon-y, hand-drawn look would be a fine aesthetic, but it’s mixed in with generic assets, so there’s no cohesion. It works. I didn’t find the approach added to nor detracted from the final product.

Characters don’t move their mouths when they talk, the music is just kind of there, and the narrative doesn’t really do anything terribly cool. It’s a very time-conscious production, and that feels extremely appropriate. It’s at its best when you’re just riding the rails and tinkering with your train, but that can only be stretched out for so long.

That’s not to say that there isn’t anything that Choo-Choo Charles could have done to be a more compelling experience. Moments with the cultists are a bit underwhelming since your character can take a surprising amount of buckshot before keeling over. Combat outside of the train, or simply more moments where Charles could harrow you when you’re at your most vulnerable would have been appreciated. Likewise, fancier terrain or setpiece moment might have upped the scare factor a bit. I suppose if there’s ever a sequel, those bridges can be crossed. 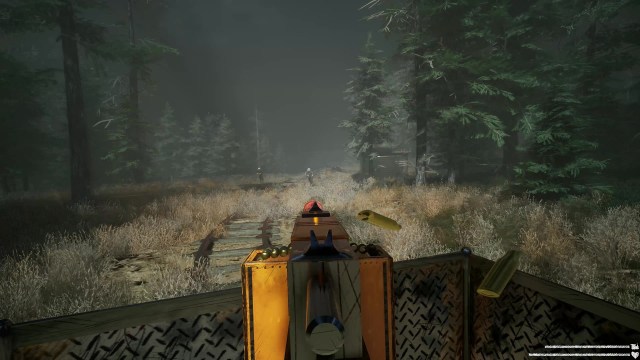 As it is, Choo-Choo Charles is what it says on the box, and that’s okay. If you want to play a title with train-to-train combat, then you’ve got it right here. It’s executed competently, and given its unique premise, that deserves some props. It just doesn’t go above and beyond by any means.

Which is fine. Choo-Choo Charles could have been drawn out, fluffed up, or watered down in so many ways. Any additional brush strokes could have detracted from the bigger picture, but Two Star Games didn’t do that. Instead, they focused on delivering, and deliver they did. It’s small, tight, and its ambition doesn’t go beyond its central concept. Thankfully, that central concept is a pretty juicy morsel.