You read that book as a kid, right? 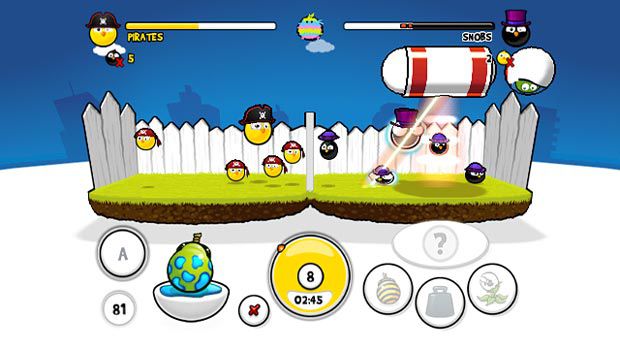 chick chick BOOM began life as a freeware Flash game — an Easter-themed, limited-time event brought to you by the same cats who made that Mission to Snowdriftland Advent calendar game. Today, it’s that game on the Wii Shop Channel with a title that sounds like that of a mediocre, turn-of-the-century, radio-friendly single from a band whose fanbase goes shopping for children’s clothing in the hunting section of Dick’s Sporting Goods.

It’s is a turn-based battler in which two teams of five chicks each try to knock one another out. On your turn, you have thirty seconds to set up an attack, which involves tracing a pattern on the screen with the Wii Remote. Trace fast enough and you’ll be able to upgrade your attack to a more powerful version. Attacks can ultimately fail if the defender draws the appropriate deflection with the pointer.

The name of the game here is “streamlined controls.” Aside from moving your on-screen cursor with the pointer, your only available button inputs are A and B. A handles prompt selection and screen drawing while B is used for target shooting during certain events. Very clean, very simple.

The challenge comes not from fighting with the controls but from performing the appropriate offensive or defensive maneuvers once an attack is launched. There are three main attacks — bomb, weight, and plant — plus various special attacks that can be triggered even when it’s not your turn. The defender can minimize or eliminate damage completely by using his ink supply to draw barriers in his zone. For example, you draw a cage around a bomb to trap the explosion, create a roof to catch falling weight, or plant a grounded lightning rod to redirect the lightning special attack. 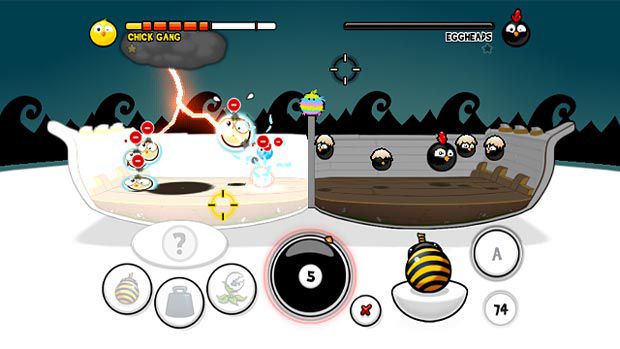 While you are constructing your defense, your opponent can use his own ink to draw lines on your side, preventing you from completing the proper barriers. As both teams accrue damage, a piñata hanging on the top of the screen will shake violently until it falls onto the fence dividing the player zones. Whoever can shoot it onto the ground first will get an item the can help you or hinder your opponent. Also, every so often Corncobman, a giant ear of corn with eyeballs, appears in the background, and shooting loose his kernels will restore some of your team’s health.

That’s about it for standard gameplay. There are three modes of play — regular dueling, timed battles in which you try to knock out as many of a replenishing army of chicks as you can under a time limit, and a pro mode in which you battle wave after wave of enemies until your team is defeated. Clearing certain restrictions will unlock new teams, but there is no practical difference among teams save for the wearing of various goofy hats.

The game is tailored for multiplayer — you and a buddy can go head-to-head or team up and battle a computer opponent. Add two more to the mix to carry out two-on-two chicken warfare. With two players on a team, one person is in charge of offense, the other of defense. What I find this arrangement to be is the perfect way of figuring out who is b*tching up the place with wobbly hands that can’t draw straight lines for sh*t. The real battle isn’t against the other team but with your own lame-ass teammate. I know some people thrive on that type of experience, however, so here ya go.

Though the initial premise of the game and the various mechanics are clever and frenetic, the life of the game is cut short by a dearth of content. You have your three basic attacks and a single environmental special attack in each of the three arenas, but that’s it. You don’t open up new skills or playing fields as you continue. There’s no campaign mode, so your investment in the game only extends as far as you enjoy pickup match after pickup match. After a while, you notice battles unfolding in the same way every time, and tedium sets in.

That’s not to say it’s a bad game, just one that’s cut off not at the ankles or the knees but right above the abdomen. I never had a chance to play the original Flash game, but from reading its Wikipedia page, the WiiWare version doesn’t seem to have added anything significant. Makes you wonder why it didn’t get priced any lower.

chick chick BOOM is fast and furious at the outset but slows down way too soon and way too abruptly. It’s fun if a bit lacking. But hey, you get to murder baby chickens, so that’s gotta count for something, right?