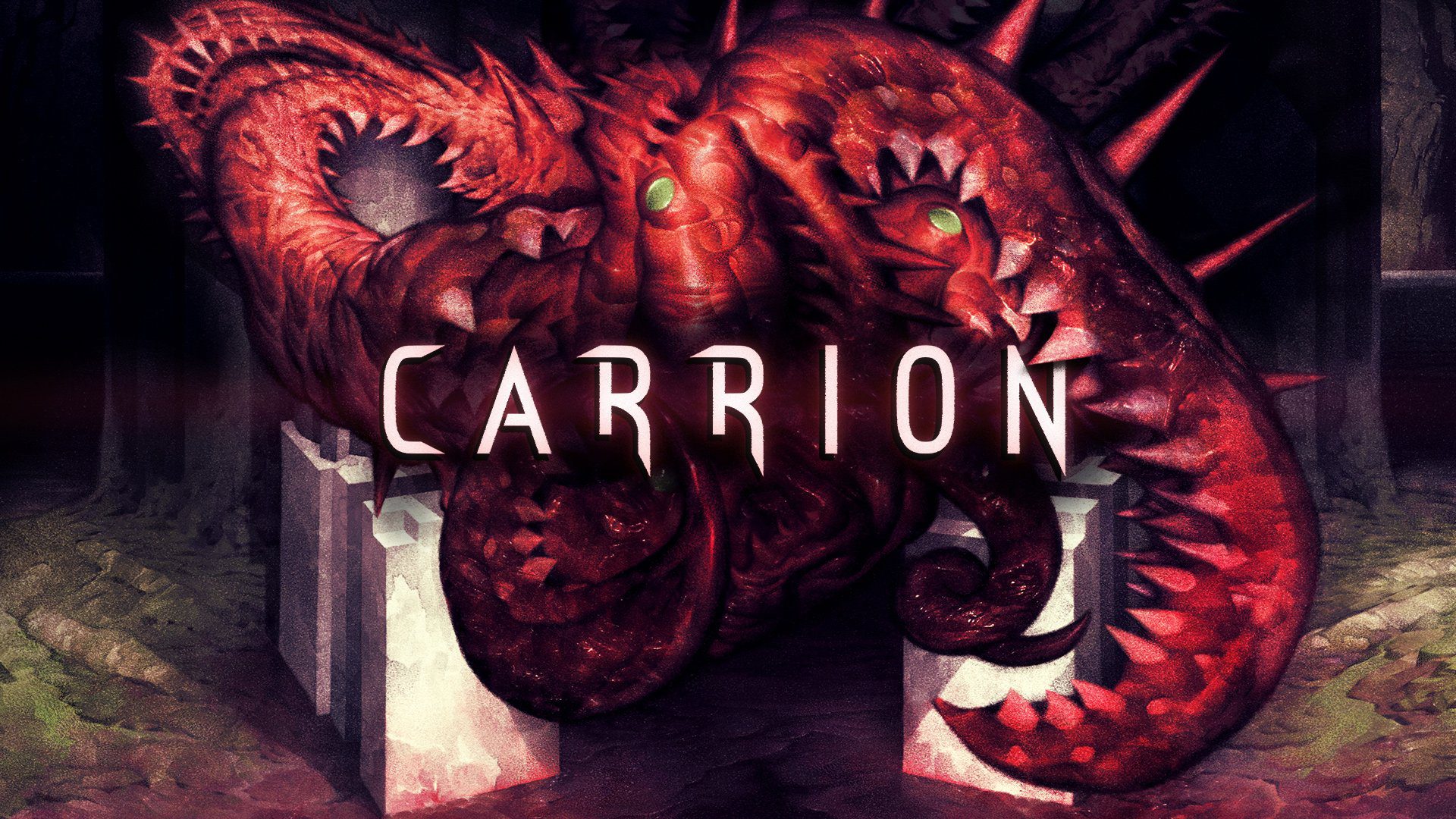 Rip and tear and feast

Carrion flips the script in a super cathartic way.

Instead of playing as a heavily-armed soldier, you’re in control of an uncontainable monster that has to tear through an underground research facility because that’s just what gruesome flesh beasts do.

You’ll squeeze through vents, fling doors and vending machines with your tentacles, snack on  scientists, mutate into even deadlier forms, and try not to get burned to a crisp by flamethrowers.

I don’t typically dive right into my reviews with a comment about game length, but in this case, I think it’s warranted. Carrion isn’t very long – and that’s for the best. It doesn’t outstay its welcome with needless padding. It has the right amount of ambition for its human-tearing monster power fantasy.

I finished the story in around three hours, and then I spent another half hour or so scouring several areas again to find all nine “secret” containers that give the monster a slight edge when it comes to survivability. This is a single-sitting game in the best possible way. It feels effortless to keep playing.

If you’ve seen any footage this year – even a screenshot, honestly – then you know what you’re getting into with Carrion (barring a surprise or two). It capitalizes on the simple pleasure of darting through tunnels as a gross multi-tentacled creature, a game concept that doesn’t come around nearly enough.

Sometimes you’ll take control of a human for a world-building flashback sequence (or a brief parasitic puzzle-solving moment to open the way forward), but otherwise, it’s an unrelenting slaughterhouse.

Carrion has this way of nudging you in the right direction without holding your hand or giving you a map. I wouldn’t necessarily call it a metroidvania, but it has some of those vibes. Structurally, there are distinct interconnected zones that are made up of individual rooms with multiple entry and exit points, and the monster will gain new offensive and traversal abilities to help it push deeper into the base.

The monster is powerful, but it’s not invincible – if you attack shield-bearing guards or drones head-on, you’re gonna have a rough time. You don’t have to like them, but you’ve gotta show some respect.

Every room is a chance to slink around undetected before you find the right moment to pounce, and if you take too many bullets, you can regain health by feeding on corpses or popping into a checkpoint to gain more meaty mass. Once you explore enough to activate every checkpoint and “take over” an area, you’ll bust open the gateway to the next region. That said, there are a lot of detours to bypass.

Each form of the Carrion beast has specialized abilities, so bigger isn’t always better depending on the route. Further into the game, you’ll mutate to bloated new heights, but this sturdier body isn’t permanent. You may need to charge through a barrier as one form of the beast only to hit up a (specially marked) safe point to shed mass, devolve to a smaller body, and shoot a web to pull a lever.

That mechanic might sound like a pacing killer, but in practice, the levels are designed in a cohesive, intuitive, natural way. The more puzzle-centric rooms fold into each other, so changing forms is rarely if ever a chore. Carrion has this excellent ebb and flow between almighty power and frail stealth.

I’m glad Phobia Game Studio sidestepped the old “rising stakes” pitfall where the enemies have to become deadlier – and often overly annoying – to better match the protagonist’s progress. That’s not a problem here thanks to the game’s shorter run time and clever way of handling traversal abilities.

Other than a few finicky control issues with grabbing the wrong object in a cluttered room or getting momentarily caught up in tight passages when playing as the beast’s largest form, I had a breezy time.

If you’re looking for a cathartic pick-up-and-play game with little to no fat that you can slip in between this summer’s massive story-driven titles, that’s Carrion all the way. It’s a devilish snack.