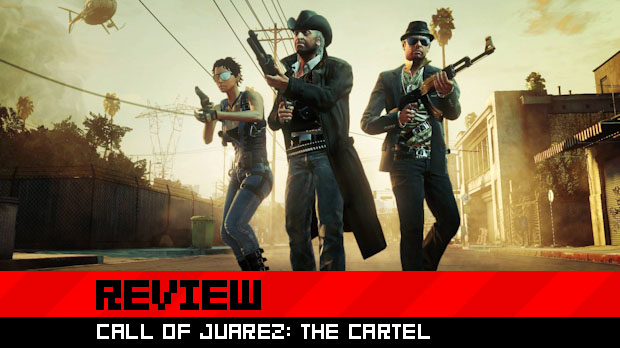 Call of Juarez: Bound in Blood wasn’t a great videogame by any stretch of the imagination, but it had a certain charm to it, and some terrific ideas. The series seems to be all about these really clever design choices that suffer from a lack of follow-through, be it through lack of time, skill, budget or all three.

Call of Juarez: The Cartel is exactly like that. But worse. Far worse. 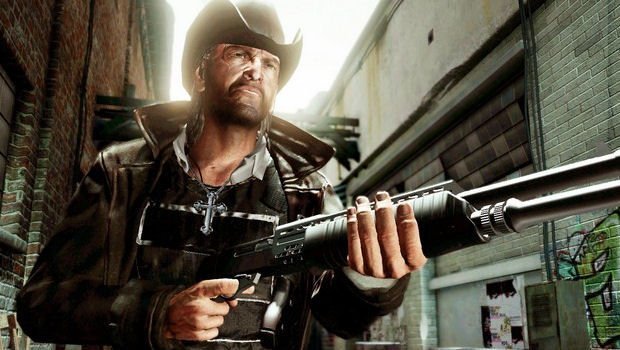 The Cartel abandons the series’ original Wild West premise, featuring only the most shallow of nods to its cowboy legacy in a tale of Los Angeles gang warfare, dangerous drug dealers, organized crime rings and private military companies. The story is, to put it bluntly, a convoluted cluttering of concepts that come together like a particularly nasty car crash.

You get a general idea of who everybody is and what they’re going to do, but you’ll struggle to find out why anything is happening, and there are so many attempts at creating plot twists and 24-like moments of secret agent action that you’ll drown in the contrived mystery of it all. It’s quite clearly trying to be an action thriller full of political intrigue, but the production is so forced that the entire narrative comes across as tawdry and desperate.

The co-op campaign revolves around three characters, all of whom can be controlled by players online. The ethnically diverse crowd consists of a grumpy white L.A. cop who is also inexplicably a cowboy, a stereotypically shady Mexican DEA agent who might be crooked, and a tough-talking female sniper who is black, but not too black that she’d offend the white middle classes. 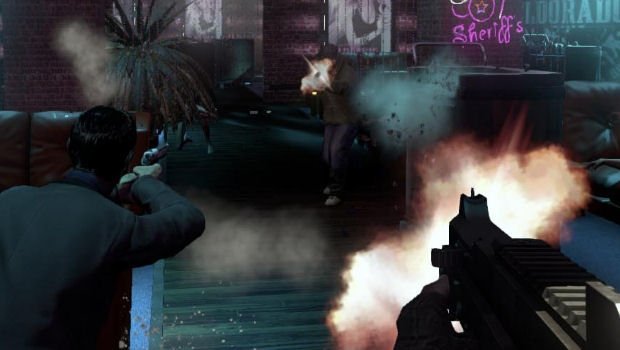 Each character has their own specialty — Cowby McGruff is best with pistols and close-range combat, El Shady is a mid-range rifle expert, and Ms. Forcibly Sassy gets a bonus with sniper rifles. Despite this, however, it quickly becomes apparent that pistols aren’t very good, and no matter how many rifles you unlock, the majority of the game is best played with the first assault rifle you find, no matter which character you pick.

This reliance on a single gun represents the biggest gameplay problem apparent in Juarez — the fact that every mission is almost entirely the same. There are flashes of promising originality — especially in the locations — but for the most part, almost every level consists of walking/driving to a destination, doing some talking, getting into a series of pitched battles in arena-like areas, then getting into a car chase. This formula repeats itself with only slight variations throughout the course of the entire game.

Juarez tries to spice things up a bit with an idea that is genuinely brilliant, but simply isn’t capitalized on. Each character will receive phone calls from NPCs that only they can hear, and they’ll be given their own secret missions and agendas that run parallel to the main objective. The aim is to create an air of subtle competition and persistent mistrust, but unfortunately this is almost solely done by having players collect miscellaneous items without being seen by their teammates, which inspires about as much “mistrust” as a friendly hug. It’s also not uncommon to get phone calls in the middle of fights (don’t worry, enemies are polite enough to stop fighting), or be forced into multiple unskippable conversations in a row.

What could have been a unique and clever manipulation of the co-op format is instead both overbearingly shoved down one’s throat and lazily implemented. By the time the game reaches its conclusion and it tries to pull a Double Dragon, nobody will really care. 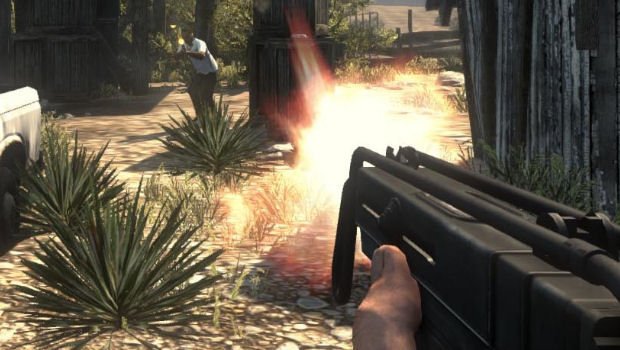 The lack of drop in/drop out co-op also hampers the experience. In order to engage in co-op, players have to set their game to online mode in an interactive lobby that appears at the beginning of each level. Even if you’ve no intention of playing co-op, you have to load and sit in this lobby area before manually starting your separately loaded mission. If you would like co-op help during a mission, you’ll have to quit, restart the whole level, and wait patiently for someone to appear. If anyone shows up — they frequently do not.

The Cartel features an obligatory competitive multiplayer mode with obligatory game types and an obligatory rank system in which one can unlock new guns, new perks, and new character skins. The main bulk of the experience is waiting around in an interactive lobby room for no other players to appear, while the game consistently fails to connect you to anybody else’s rooms.

For the most part, Call of Juarez: The Cartel is a by-the-numbers first-person-shooter with only half-hearted attempts to stand out from the pack. Car chases are thrown into the mix but they’re incredibly repetitive and fail to be exciting by the third, identical sequence. Players can temporarily activate bullet time, but if you don’t want to hear a contemporary cowboy say, “I bring not peace, but a motherfucking sword” every three minutes, it’s not much fun. With these consistently regurgitated, half-baked gimmicks removed, you’re left with a mediocre, underachieving, relatively inoffensive shooter. 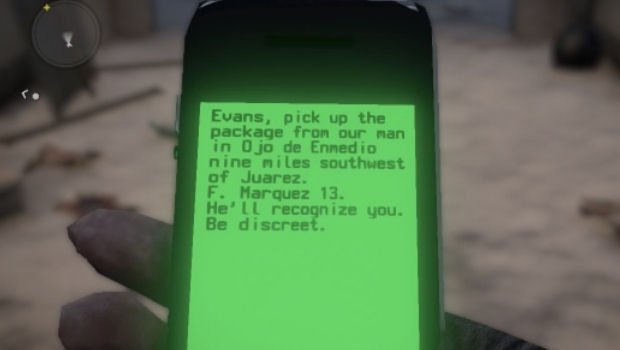 Or rather, that’s what you have before one factors in the sheer mess that is The Cartel‘s retail code. With muddy graphics, objects that shiver uncontrollably, and sound that will cut out every few minutes, Call of Juarez looks and sounds like a school project that hadn’t been started until Thursday night and needed handing in on Friday morning. Cutscenes have the kind of framerate one expects from stop-motion animation and there was even an occasion where I had to restart a checkpoint because enemies that I were obligated to kill were spawning behind fences that I couldn’t reach.

These are not minor problems that go away. Sound cuts out throughout and the game occasionally freezes for split-second intervals that completely throw the player’s aim off. Character animations are awkward at best, and the overall game is presented in such dark browns and grays that enemies are often difficult to distinguish from the scenery. The only good thing I have to say about the presentation is that the soundtrack is surprisingly decent, but its high quality only serves to highlight how poor the rest of Juarez is, contrasted as it is against an ugly, slipshod little waste of time.

The Cartel‘s lack of polish is offensive for a $60 retail game. I’d expect this lack of attention from an obscure self-published PC game by a studio nobody’s ever heard of from a country nobody’s ever visited, but not in a game with Ubisoft’s financial patronage and Techland’s experience. The fact that this isn’t being sold as a budget game is, quite frankly, disingenuous and shameful. Nobody should have the right to charge a full $60 for a game this badly stitched together. 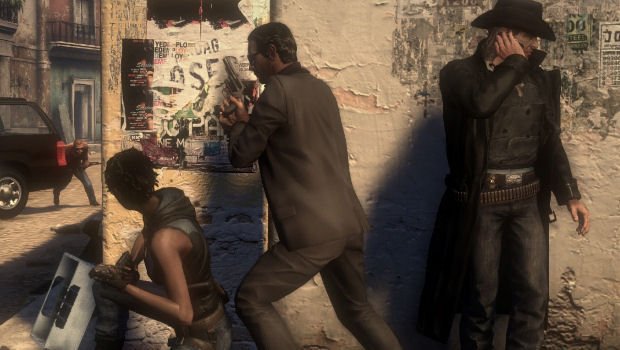 Call of Juarez: The Cartel could have gotten away with being an unremarkable yet playable shooter, but the galling lack of presentation and legitimately uncomfortable audio/visual problems make it an unpleasant experience overall. Unfinished, buggy, and barely fun to play, Call of Juarez: The Cartel is a sloppy serving from people who should know better, and ought to be ashamed of themselves.