I’ve always said that the best Call of Duty DLC involves the silliest concepts. Don’t give me maps that should have just been in the base game: give me water parks and locales where everyone is shrunken down to the size of ants.

Call of Duty: WWII took forever to get to this point with its fourth and final add-on, but it got there nonetheless, tempered as it may be. 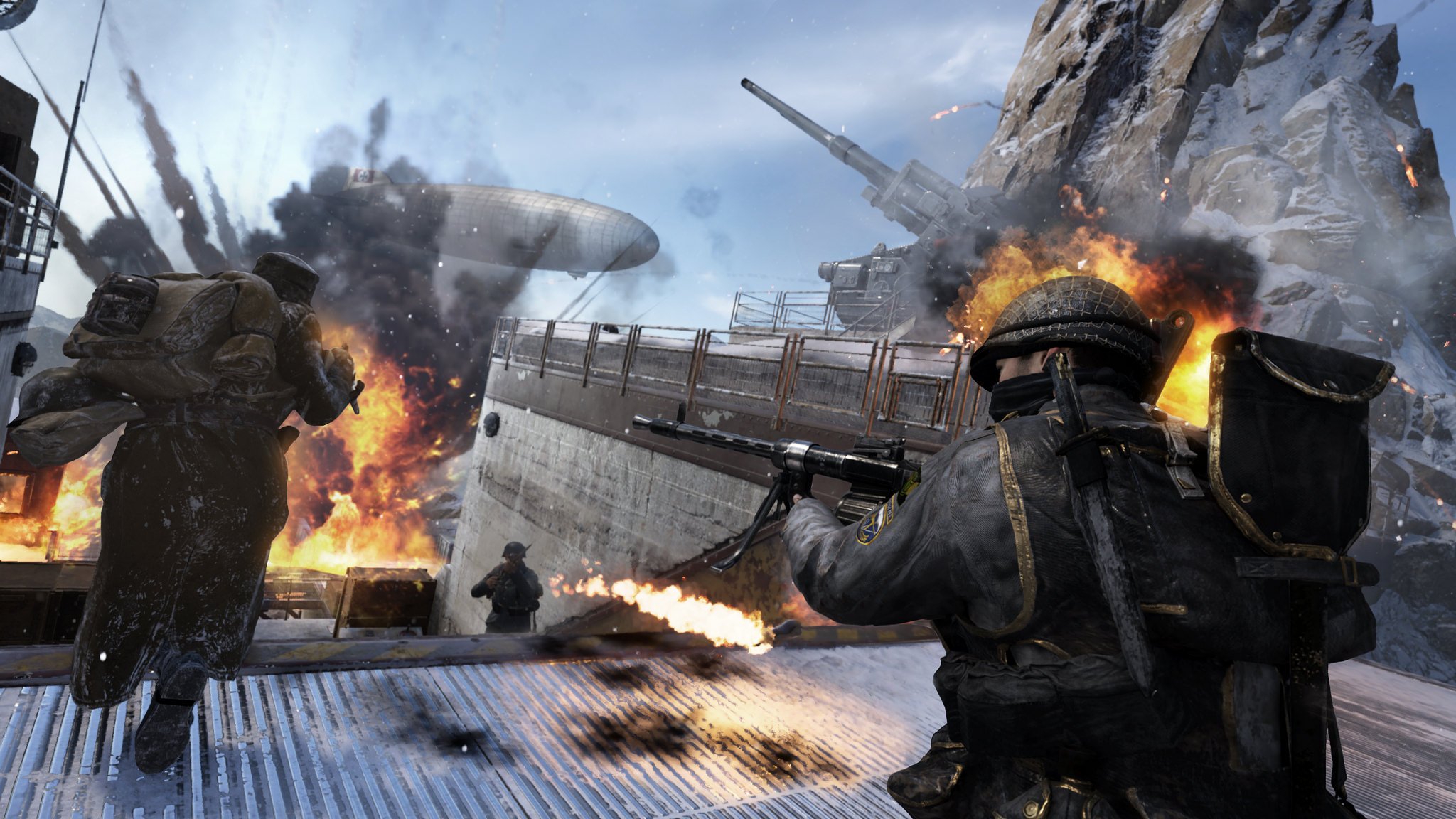 Maybe Airship, one of the four traditional offerings in Shadow War, isn’t the greatest example, but it still has more character than a lot of other maps in WWII. I’m a sucker for snow zones so it already ticks that box, but the slopes of Airship make for some exciting hit-and-run firefights.

Battling over the airship is fun enough and it’s conventional when it needs to be. An ice cave and several other hot spots make for some great objective mode play. It gets a passing grade.

Chancellery is equally flashy, focusing on a war-torn consulate building riddled with bullet holes and blown-up walls. Having been on my share of estate tours, both of the American and European variety, I was impressed with the amount of effort that went into designing the main set piece here. Ornate halls, walls, and floors are part of the deal, and you can sense that a great deal of effort went into creating this map.

It all sorts of blends between indoor and outdoor locations seamlessly, and the lighting is superb. It’s one of those things that feels like it belongs in an old-school Rainbow Six mission. 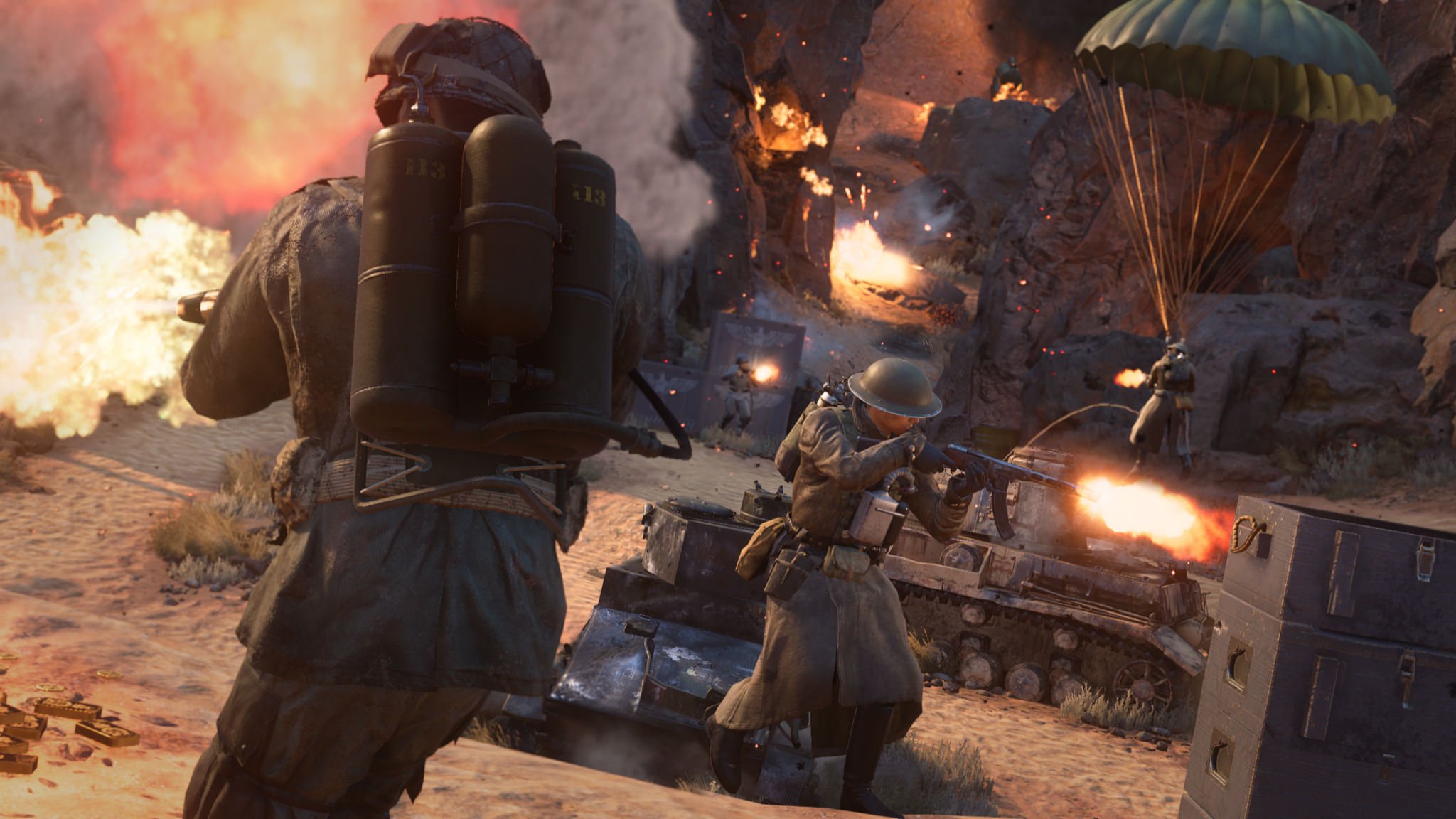 Excavation takes us to Algeria, a region seldom seen in shooters. Although it skirts the overused trope of “stolen Nazi art” it sticks to the script, going all-out with bits of gold littered about the map, which at least ensures that I’ll remember it in a week’s time (vaguely, at best).

The layout feels right at home in a lot of earlier Call of Duty games, with a commitment to outdoor brawls and plenty of rocks that serve has head-high hiding places. It’s just impressive enough to pass the DLC litmus test but it’s by far the weakest map of the bunch, almost like it’s a holdover from the other packs that was stuffed at the last minute. 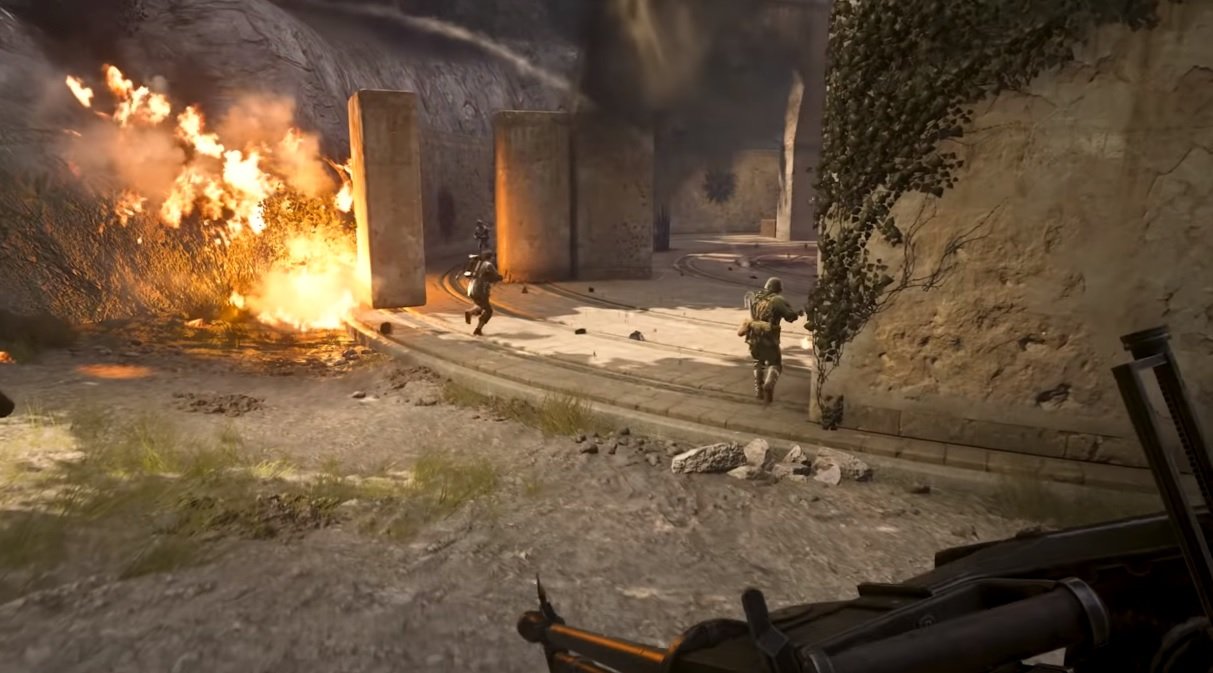 Operation Arcane is where things get really weird (good). This war mode map (which plays out like a little PVP campaign) has concessions for alien technology and super soldier serums, Captain America style, something rarely seen outside of the popular zombie mode. (Unless Call of Duty‘s stable of developers feel like getting really nuts with Predator and Michael Meyers cameos.) Tesla guns are fair game, blurring the lines between zombies and regular Call of Duty.

It’s one of those things where I’m sure purists will be upset, but really this is a DLC inside of an ancillary mode and I’m glad Sledgehammer is trying new things. The actual layout is pretty droll and the mission is over far too quickly, but the goodies help spice things up and the lab where everything is stored looks like it was taken straight out of Avengers 2.

WWII pivoted into a “scarier” zombie mode and thanks to some engine enhancements I think they accomplished that goal.

The original zombies were iconic but the new horrors in this iteration are suitably grotesque, and the finale doesn’t disappoint in that regard. Frozen Dawn closes out the WWII chapter of the zombie saga, and once again pits our heroes against the cult of Thule, but this time it’s on their home turf. It’s a right way to end a series of add-ons, that’s for sure. If the cultist in the header didn’t tip you off this mission is going to some dark places — hats off to the creature design team as they outdid themselves here.

If you haven’t played zombies for a while, know that over time things got a lot more cinematic and less horde mode oriented. Many maps contain secret objectives to complete, and recently there’s even a story playing out by default. Frozen Dawn starts off at a crash site as you fight for your life, then slowly moves into a descent into the creepy as hell Thule installation that wouldn’t feel out of place as a Doom map (after a blood sacrifice to open the door of course). It’s engaging as a micro story mission even in solo play, and one of the most impressive zombie offerings to date.

Call of Duty: WWII – Shadow War is the strongest pack to date, but given what we’ve had so far that isn’t a major accomplishment. As Activision continues to forge on with Call of Duty and weighs the needs of myriad fans, more exciting DLC needs to factor into that assessment. I don’t envy the task but with $50 Season Passes, something has to give.