Whether or not Call of Duty deserves its status as the most powerful videogame franchise of the modern era is a debate that will likely rage long after its star has faded. No matter what one thinks of Activision’s market-dominating shooter, one cannot argue that its influence has been huge and that it has helped define a console generation … for better or worse.

Nothing lasts forever, and one day, Call of Duty‘s unprecedented run of success is sure to end. It will not, however, end with Call of Duty: Modern Warfare 3. 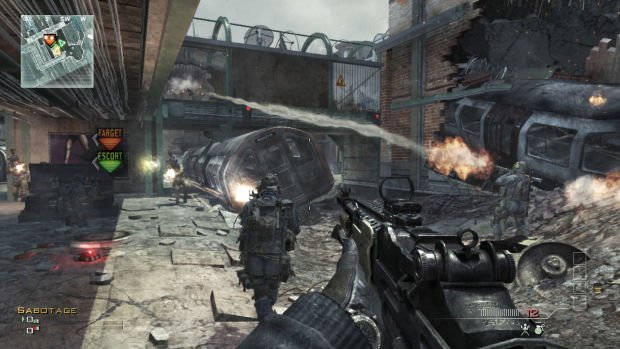 Modern Warfare 3 tosses players right back into the fictional near-future setting that has seen World War 3 break out across the United States and Europe. Captain Price and his unit are still wanted men, and they’re still on the tail of the madman who ignited conflict between Russia and America, Vladimir Makarov. As ever, the story shifts focus between various units and multiple player characters before culminating in what may be one of the most brutally gratifying showdowns a videogame has ever presented.

As one of those rare sorts who enjoys Modern Warfare the most for its narrative campaign, I can confirm that this concluding story in the saga is a satisfactory one. The usual collection of roller-coaster moments is out in full force, with daring helicopter escapes, explosive war zones and chilling tours through ruined city streets presented with the usual class and polish that Infinity Ward brings to the table. As always, the single-player mode is but a five-hour romp, but its length is more than enough to present a thrilling, adrenaline-pumping sequence of high-speed shootouts across a wide variety of locations around the world.

Modern Warfare 3 has to be commended on just how immersive it is. Featuring engaging player character animations and environments packed full of violent action, the game never once loses its grip on the player’s attention, compelling him or her to press ever onward in search of the next big “wow” moment. Even more notable is the fact that — for once — Infinity Ward has created a story that flows almost perfectly. Previous games’ plots felt rather alienated from the gameplay; they amounted to a litany of set pieces with only vague expository details littered throughout. In this final chapter, the drawstrings have been pulled together to create a tighter bond between game and story, making for a near-perfect send-off for the current story arc. 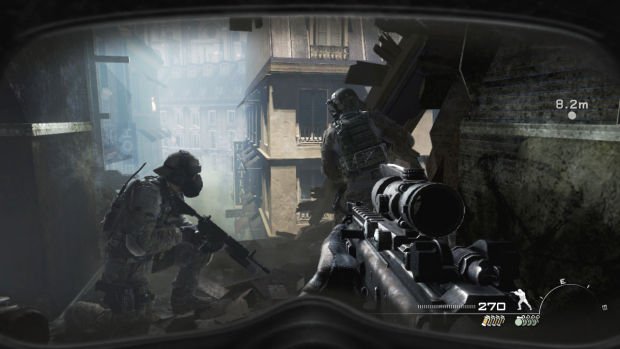 That said, the game doesn’t quite pack the same punch as its predecessor when it comes to those set pieces, mostly because it’s hard to take the action much further than Modern Warfare 2 did. As is the problem with many third entries in franchises that won’t totally reinvent themselves, all Modern Warfare 3 can do is refine what came before, and while it certainly does that, the potential to surprise players has degraded a little. This doesn’t mean the game is ineffective — it can still draw the awe from a gamer — but those looking for something as memorable as the famous nuke sequence from the original Modern Warfare or Modern Warfare 2‘s “No Russian” level will be a little let down.

As well as the single-player, a new batch of Special Ops missions is available to play either solo or with a co-op partner. It contains its own ranking system and related gameplay bonuses; players will be able to unlock up to three “tiers” of missions, each with their own objectives, enemies and courses. Mostly taken from stages in the campaign, these missions involve such tasks as collecting toxic samples from poisonous bombs or disarming explosives on a submarine. There’s nothing here that could claim to be truly unique or interesting, but it does make for a lot of extra content on top of what we’ve come to expect.

New to Special Ops is a plethora of Survival Maps in which up to two players must hold out against waves of incoming enemies. This is Modern Warfare‘s more grounded answer to Treyarch’s Zombies mode, with points going toward unlocking weapons, perks, and equipment upgrades. I absolutely love this new mode and appreciate that a rather large selection of maps is on offer. My only gripe is the two-player limit, as survival modes are always best with a team of at least four, and I see no reason for the restriction. 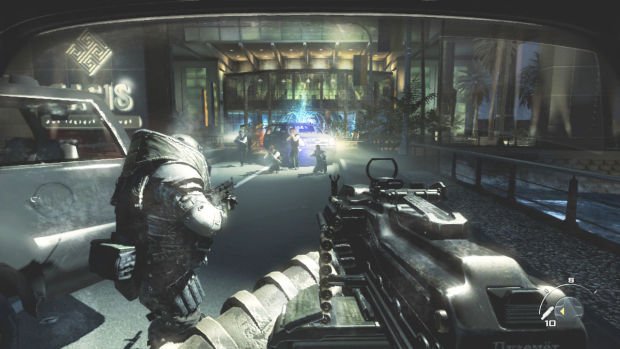 Of course, competitive multiplayer is the mode almost everybody thinks about when it comes to Call of Duty, and I can confirm that Modern Warfare 3 boasts what may be the best multiplayer the series has had to date. Improving what worked in previous games and altering less successful elements, MW3 provides an experience that feels both deeper and more streamlined — giving players all they need to jump right into the action but holding a lot of extra toys to play with under the surface.

The biggest change has come to the Killstreak system, a previously contentious subject among the COD community. There are now three “Strike Packages” tailored to different sorts of players, balanced in a way that ensures everybody gets to enjoy the game and feels rewarded for helping their team in whatever way they know best. Players can equip three streak abilities, and unlock new ones by earning unlock points during gameplay.

Making use of Strike Packages is more about earning points than simply scoring kills, meaning those who help players in other ways — be it by capturing flags or assisting kills — get a bonus, too. It’s a fantastic way of dealing with the thorny issue of imbalanced killstreaks in prior games, and as someone who primarily plays Domination, I love the idea of getting a prize for my various support actions. 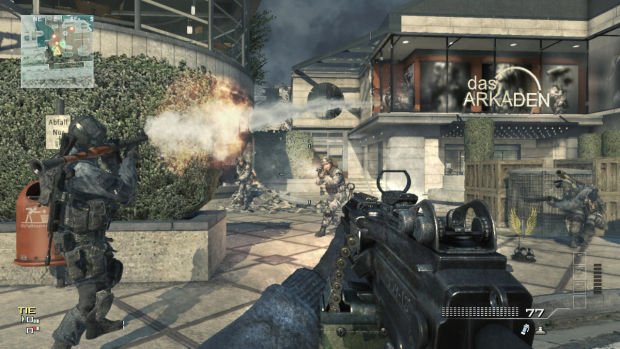 The Assault Package is designed for those who can string together multiple kills without dying. Those who partake of this package can earn abilities such as Assault Drones or Predator Missile Strikes, designed entirely to annihilate enemy players. Support Package users can keep their streaks even after death and earn gadgets that help the player’s team out, such as UAV Recon or Anti-Air Turrets. Finally, the Specialist Package awards new Perks to those who can maintain streaks in a single spawn. These Perks are added to ones the player already has equipped, allowing for the potential to enjoy huge benefits if one can survive long enough.

Perks themselves have been given the usual spring cleaning as well. Some, such as Stopping Power and Last Stand, have been traded out, while new additions include Blind Eye (invisible to aircraft) and Assassin (undetectable by thermal sensors, UAVs, or pretty much any electronic equipment). Perks seem geared far more toward personal support than giving players a true combat edge this time around. Most Perks with a focus on killing power have been eliminated, while those improving survivability are abundant. I have to say, I like it. A subtler Perk system is what the game needed, especially with the Strike Packages adding more definitive variety to the proceedings.

Action unfolds across sixteen maps, all of which are incredibly well designed with a beautiful balance between tight corridors and wide-open spaces. Familiar modes such as Search & Destroy and Headquarters are joined by Team Defender and Kill Confirmed. In Team Defender, the team earns points if a player can capture and carry a flag without getting killed and dropping it. Kill Confirmed is a great twist on Deathmatch in which the team won’t get a point for a kill unless the victim’s dropped dog tag is collected. Naturally, the opposing players can capture the dog tag themselves to deny that kill. Both of these modes are merely variants of familiar gameplay, but they are very good variants, and I foresee Kill Confirmed in particular becoming popular. 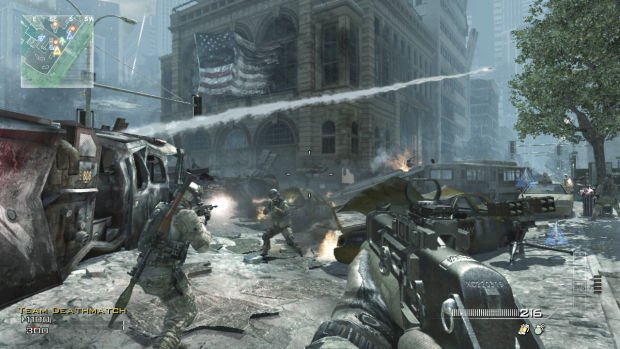 All of this content is added to the usual class progression and a weapon proficiency system that allows new guns and upgrades to be collected. With eighty levels to achieve and subsequent Prestige ranks available, there is a silly amount of content for those players literally obsessed with Call of Duty — and there are a lot of them!

For those obsessives, Activision has also provided Call of Duty Elite, a subscription-based social network where players can create their own private clans, indulge in extensive stat-tracking, share videos and access mobile apps. COD Elite deserves its own review and will be covered separately, but let it be known for those worried about being nickel-and-dimed that Elite is entirely optional and perfectly forgettable if all you want to do is play the game. Nothing has been withheld from the main title, and Elite will only further absorb those players who have become addicted to the point of needing professional help. 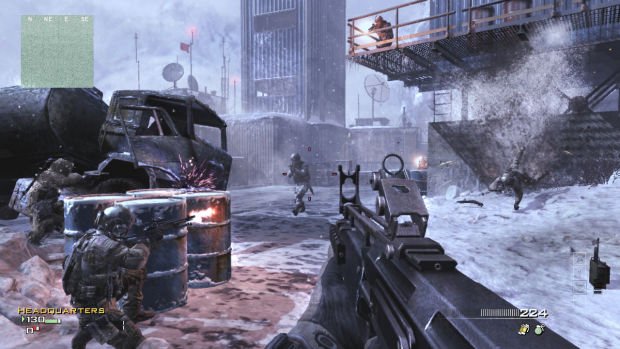 Call of Duty: Modern Warfare 3 treads familiar ground and focuses on tweaking rather than reinventing, and that’s just fine. While there are no major revelations or surprises, this is still a gorgeously produced package that gives military shooter fans exactly what they want. There’s a reason why Call of Duty is the most powerful videogame franchise of the modern era, and Modern Warfare 3 serves as a reminder — it’s just that damn good at what it does.

Whether you like what it does is a matter of personal taste, but the skill and experience brought to the table is hard to refute. Modern Warfare 3 gets it done, and it gets it done damn well.