The biggest game of the year is finally here. Infinity Ward created one of the most popular, well-crafted and subsequently imitated first-person-shooter games in Call of Duty 4: Modern Warfare and a sequel was inevitable. Two years on and we have Call of Duty: Modern Warfare 2, a game that aims to be bigger, sexier, and more full of explosions than Call of Duty 4 ever was.

A year of controversy and hype preceded it. A year of debate and rage and more marketing dollars than any reasonable human being could conceive. With the game in our hands, however, it is  time to put such things aside and ask the only question that really matters: Just how good is the biggest game of 2009? 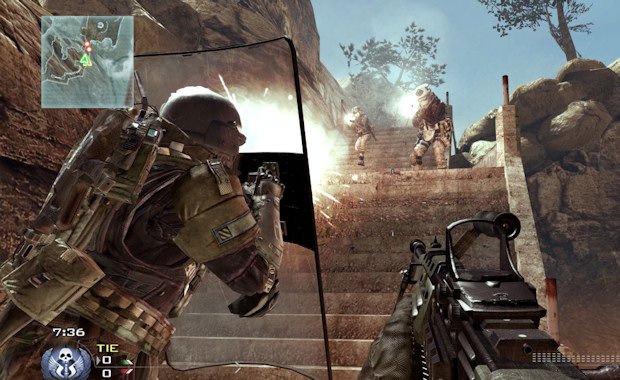 Call of Duty: Modern Warfare 2 is set five years after Call of Duty 4. Imran Zakhaev is dead, but he has left behind a terrible legacy. His death made him a martyr in the eyes of the Russian Ultranationalists, and his former lieutenant Vladimir Makarov has embarked on a campaign of terror across Europe. America fights a covert war against Makarov, but in doing so sparks a chain of events that has unspeakable consequences for the rest of the free world, not to mention Task Force 141, a unit of British soldiers who continue the pursuit of Makarov and find themselves embroiled in a conflict that’s more than Good Guys vs. Bad Guys.

Infinity Ward has proven that it can create interactive setpieces like no other, and there is no denying that the single-player campaign for Modern Warfare 2 is a roller coaster ride that never lets up. Its individual plot points are intense, jawdropping, surprising and, in some cases, deeply disturbing. Its story about hard-bitten men who do awful things in the name of freedom is a resonant and supremely promising one, and not a single level goes by without something truly memorable happening. As a collection of events, Modern Warfare 2 is without compare. 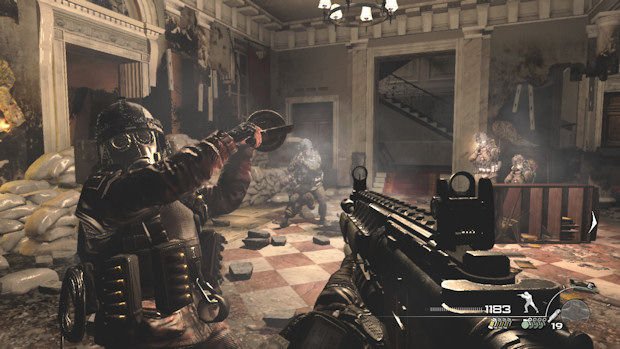 As a coherent story, however, the game slips up. Infinity Ward has no equal when it comes to self-contained, interactive narrative elements, but the studio fails at pulling the drawstrings together to create a flowing plot that makes sense. The game is so focused on giving us the next big explosion that nothing is allowed to build to a crescendo. Huge plot points come and go in a matter of seconds, and things that should be consequential and important get lost in the mass of shockers and endless twists. The overall story becomes a garbled mess that makes very little sense, which is amazing considering how well crafted each individual chapter actually is.

The overall plot may be inane and poorly stitched together, but Modern Warfare 2‘s campaign is something that has to be played. Taking the best parts of every FPS you’ve ever experienced and then making them even more amazing, Modern Warfare 2 provides consistent entertainment and fantastically paced gameplay that has no rival. It’s like five Hollywood action movies smashed into each other on a busy road and Modern Warfare 2 was the result of the messy collision. Despite a short length of just five hours, the single-player mode packs in more adrenaline-pumping sequences, unforgettable climaxes and truly shocking scenes than most games that run twice as long. 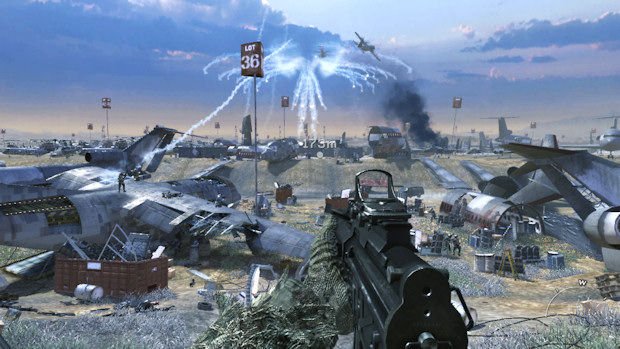 As far as the actual gameplay goes, Modern Warfare 2 is a vast improvement over previous titles in the Call of Duty series. The horrible design decision that saw enemies respawning until you got to specific map locations has all but been eradicated, with many levels now rewarding you for staying put and using cover, rather than running through a level and hoping for the best. Cheap grenade spam is also cut down to a minimum, and players seem to have a better chance of evading the explosives that do come their way. Death can still comes come seemingly from nowhere, helped by the fact that enemies will jump you from behind and hide on rooftops, and sometimes new game elements are quickly thrown at the player without warning, but the frustration levels are down to a bare minimum and deaths are nearly always the fault of the player, rather than the result of six grenades.

There’s plenty of variety, too, and no one level ever stays the same for long. One moment you’ll be slowly picking your way through a blizzard, stealthily eliminating soldiers. Seconds later you’re blowing stuff up and mowing down enemies while trying to escape a military base. A few more seconds later and you’re on a snowmobile, tearing down a slope and trying not to collide with fanatic pursuers. The game constantly changes on the player, and it’s never short on surprises. It truly is a must-play experience, even if one has to ignore the ludicrous plot at times to get into it. 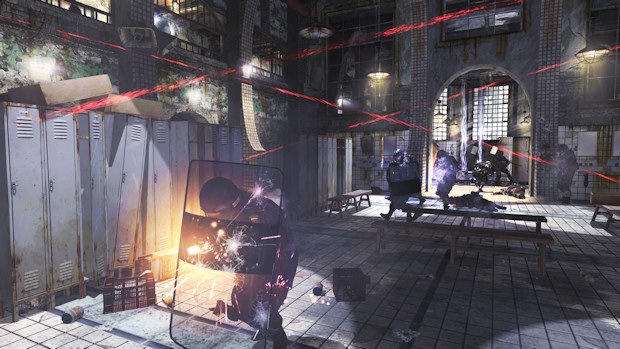 Backing up the single-player is, of course, the online multiplayer. This is where the length of the campaign is more than made up for, with Infinity Ward building upon the excellent work started in Call of Duty 4. Everything awesome about the first game (sans dedicated servers on PC, of course) is present and correct in Modern Warfare 2, but refined and built upon where appropriate to provide an experience with more feedback, more rewards and more satisfaction than before.

The Perks system returns with a whole mass of new abilities to help give dedicated players an edge in battle. Old favorites like “Stopping Power” and “Sleight of Hand” return, but are backed up by new “Pro” variants. Continued use of Perks allows them to become “Pro,” providing even more abilities. The revitalized Perk system helps cut down on grenade spam by including fresh equipment abilities. These equipment items swap the grenades for potentially more useful items, like a tactical insertion flare that allows the player to choose where they’d like to respawn. Not only are these items unique and fun, but the choice between using them and using grenades is a brilliant idea that cuts down on potential frustration and forces grenade spammers to sacrifice a potentially superior inventory. 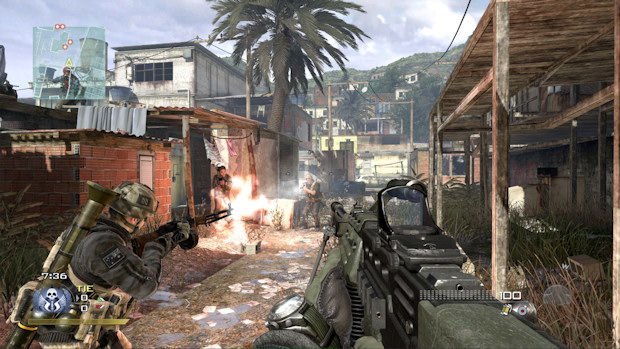 A new quasi-Perk known as the Death Streak has also been added. Death Streaks kick in when a player is consistently killed by enemies, and provide temporary health boosts, the ability to copy the enemy’s character class, Martyrdom, and more.

Kill Streaks are back, and bigger than ever. They can now be customized, so if a player doesn’t want a helpful care package to drop when they’ve killed four players in a single spawn, they can spend points to unlock a UAV Jammer and swap it out. Some of the new Kill Streaks are incredible, but run a risk of being a tad overpowering. The Predator, for example, is a deadly area-of-effect missile that can be manually controlled to land on a group of players. Unlocked after only five kills, it’s an incredibly powerful and annoying weapon, perhaps best saved for higher streaks.

The Perks and Streaks are terrific fun, but the game definitely seems more reliant on them than Call of Duty 4 was. Newcomers can expect to be overwhelmed by players with superior weapons and abilities, since they’re no longer small helpful add-ons but truly game-changing items. A few hours of play will see most players finding the right weaponry and perk set to help them survive, but it’s rough early going.

One of the best parts of the multiplayer is the amount of feedback one receives during a match. Players are informed whenever they pull of particularly cool feats like double kills or headshots, and are told when they’ve gotten “payback” kills on the person who beat them last. Players also receive post-match Accolades for such accomplishments as gaining the most knife kills, or successfully firing from the hip more than anybody else. These awards and messages constantly encourage the player through positive reinforcement, while the simple cosmetic aspect of them makes the game feel more exciting and action packed than last time. 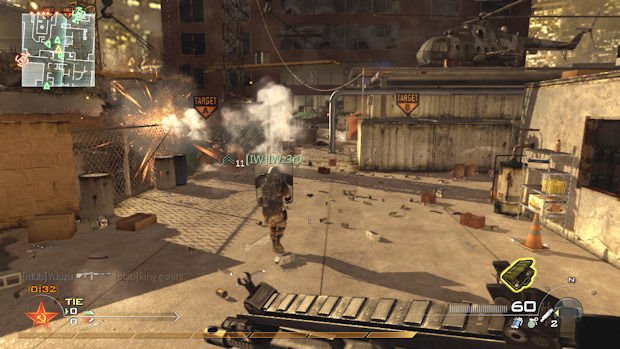 Add to that the huge amount of maps, which range from small to huge, the ability to unlock and use various callsigns and emblems for the in-game lobby, and the most welcome addition of all — blessed host migration, and you have a fantastic online package full of things to unlock, missions to accomplish and people to kill. It takes everything about Call of Duty 4‘s multiplayer and dips it in sugar. For first-person-shooter fans, it’s a treat that’s hard to find fault with, and will last for a ludicrously long time.

A few new multiplayer modes have been thrown in, the most radical being a third-person mode that makes Modern Warfare 2 look more like Gears of War or Uncharted. Unfortunately, using controls designed for an FPS perspective in a third-person mode is absolutely horrible. It looks terrific, but plays terribly, and is worth little more than a curious one-play peek. It’s a cute novelty, in any case.

The content overload continues with the new Spec Op mode, a series of challenges that can be tackled solo or with a friend. These range from obstacle courses, to sniper sieges, to simple “Kill everything that moves as quickly as possible.” There’s plenty of variety and should keep co-op fans happy, but I personally found the challenges overshadowed by the single-player and multiplayer, and have found it difficult to get into them.

All this content is made to look pretty by some really stunning graphics. Modern Warfare 2 looks vastly superior to its predecessor, mostly thanks to a more vibrant color palette and some beautifully well-lit environments. There is great shadow and contrast, with the airport multiplayer map particularly standing out for its brightness and complete lack of the color brown. Sound-wise, you know what to expect. Endless machine gun noise punctuated by gruff men shouting “Alpha, Bravo” and “Stay frosty,” at one another. If you hate military speak, you might want to turn the volume down, but you’d miss out on a very rousing soundtrack. 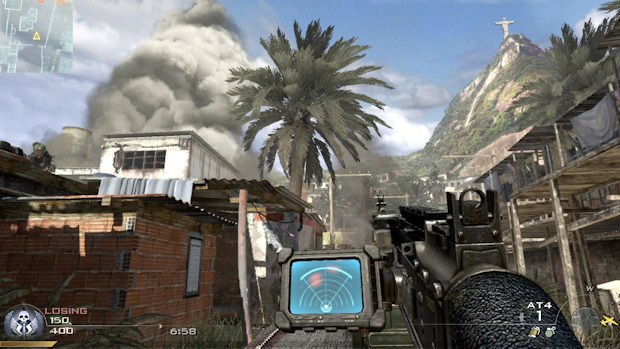 Call of Duty: Modern Warfare 2 is a game that truly lives up to the title of “Game of the year.” It carries itself with the style and swagger of a blockbuster action movie, it remains fully committed to making the player feel exhilarated and satisfied every step of the way, and not once, not ever, does it ever slow down. It’s one of the most superbly paced games ever developed, and is packed so full of content and awe-inspiring gameplay that only somebody with standards higher than human comprehension could feel cheated.

If the campaign’s story was shaped better and made more sensible, and if the online Perks were just a tiny bit more balanced, this would be a near-perfect game, no shadow of a doubt. As it stands, however, Call of Duty: Modern Warfare 2 is an utterly stellar achievement that knows exactly what its audience wants, and delivers in abundance. Truly, this is the biggest game of 2009.