I get by with a little help from Michael Myers

Call of Duty: Ghosts is one of the most disappointing games in the series’ history. Although I didn’t dislike it as much as Jim did, there’s certainly something missing that made past games in the franchise appealing, and it’s not just because the formula is getting stale.

The campaign was a bore, multiplayer didn’t really bring much to the table, and worst of all, the highly anticipated “Extinction” mode was grossly underutilized. While the new map pack doesn’t fundamentally fix the core problems of Ghosts, it does make it a little more interesting as a whole. 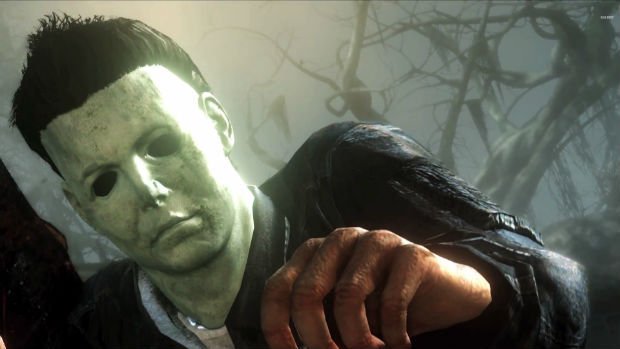 First things first, Onslaught comes with a new weapon — the Maverick. It has the unique ability to be used as either an assault rifle or a sniper, but sadly, not at the same time (all my hopes of a Transformers style gun have been dashed). I was excited to try it out, but after using it in a series of games, there isn’t much to say about it. It’s more fun as a sniper than an assault rifle, because there are so many of the latter to choose from anyway, but that’s about it. The good news then is that it’s not overpowered and won’t alienate players who don’t buy the DLC.

In terms of maps, there are four new ones — Bayview, Containment, Ignition, and Fog. The standout here is Fog, featuring a creepy swamp area and a series of shacks that are straight out of a horror movie. There’s a ton of detail here, including cult shrines littered about the brambled swamp, and a large house that features a deranged basement, leading into a runoff of blood and organs.

The interiors have a lot of work put into them, with dead animal trophies, flayed hides, and other horror themed knick-knacks in tow. There’s even a wrecked bridge leading into the level, complete with a broken down car on the other side. But the real kicker is the ability to transform into Halloween‘s Michael Myers by picking up and completing a specific field order. 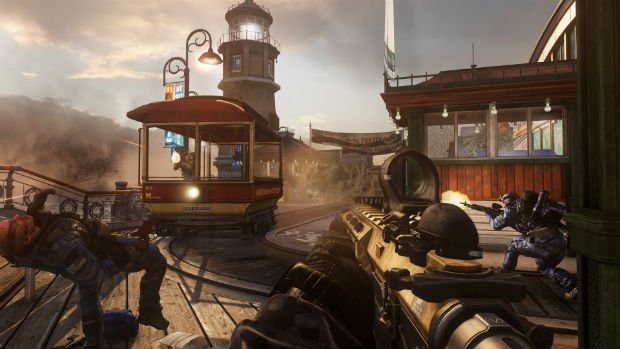 This usually happens once per match, and when it does, the iconic Halloween theme plays for everyone, and one player gets to run around the map with extra health and an axe, wrecking havoc while everyone else panics. It’s basically a modified version of the Maniac killstreak, but it’s well done and fun, nonetheless. This is one of the first times any Call of Duty has featured such an extensive Easter egg in the core multiplayer, and it really adds a lot of character to the DLC in general.

Bayview is the best new addition though, taking place on the oceanfront under the guise of a boardwalk style town. It has a distinctively different feel from most of Ghost‘s bleak maps, as it feels more Treyarch in nature with its bright hues and sunny backdrop. There are tons of buildings to explore, including a giant crab shack, an information center, and a miniature aquarium. There’s a lot of variety aesthetically and in terms of its layout, with a good mixture of indoor and outdoor environments to have firefights in, complete with a moving trolley along the map’s perimeter. All in all, it’s a pleasant surprise, and probably my favorite Ghost map in general.

Containment is a bit more boring, but not a bad map by any means. It takes place in a war torn city, almost like a World at War level. The setup is interesting, as there are two distinct sides separated by a bridge and a ravine, with a truck housing a nuke in the middle. If you approach the truck your radar is screwed up, which leads players into sticking to their sides, engaging into lots of ranged fights. Other than a giant church on one side however, there isn’t a whole lot of personality to it, and although you won’t loathe playing on it, you won’t get very excited either. 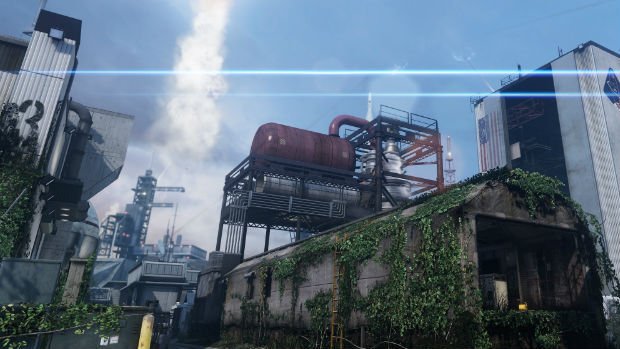 Unfortunately, the last part of the four piece map puzzle (which is a remake of Modern Warfare 2‘s Scrapyard) feels like a complete waste. Ignition features a generic layout and style that’s been done many times before — whether it’s the shuttle launching in the background or the industrial warehouse theme. The only cool part is the non-functional mobile fortress is one area (similar to the Jawa’s Sandcrawler in Star Wars), but even then that’s pushing it. This map is just so boring that I actively found myself voting against it — it’s not nearly as memorable as Scrapyard was when it debuted. Thankfully, all four maps have a really cool meta-game involving the hunt for “alien eggs,” as one is hidden on each Onslaught stage.

The main event for Onslaught however is the new Extinction storyline, starting with “Episode 1: Nightfall.” For those who aren’t aware, Extinction is Infinity Ward’s answer to Treyarch’s “Zombies” mode, but instead, it’s a bit more linear in nature, and features more mobile aliens. At launch, Ghosts came with a rather generic offering of Extinction that I only bothered to play a handful of times until I was bored to tears. But with Nightfall, I see some hope on the horizon.

Firstly, there’s now a real cohesive story involving the outbreak and a few people who know the truth behind it. It’s not a great story, but it’s something, and runs parallel to Treyarch’s attempts to link together their Zombies mode with its own lore. The other kicker is that it adds new aliens, including a boss fight with the giant Breeder, and a new miniboss — the Phantom. The Phantom is a standout in particular, as he has the ability to teleport around, Nightcrawler style. His teleporting is seemingly non-scripted, as he can feign an attack, then ghost about at will just to trick you as you’re attacked by other aliens from behind. 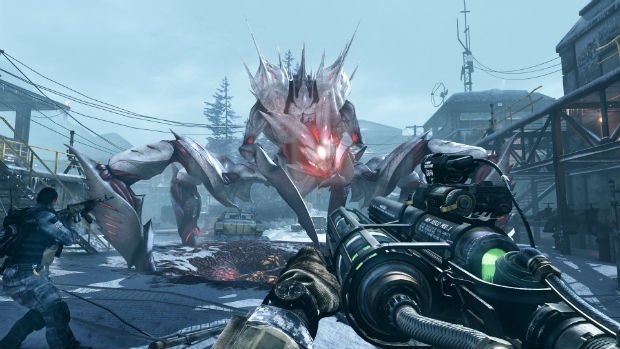 The new map is also much brighter and more open ended, allowing you to drill various alien nests at your own pace with up to four players. All of the same progression oriented gameplay is here, including the ability to choose between an assault, tank, mechanical, or healing class, to augment your party’s abilities or buff your own. Although it’s not nearly as robust as Zombies and doesn’t feature half as many tricks and secrets, I feel like Extinction has really proved its concept in Nightfall, and I’m legitimately looking forward to seeing what the next three episodes can offer.

I was pleasantly surprised by Onslaught, especially considering the fact that Ghosts was so underwhelming. Although it won’t do too much to change your mind if you’re an adamant Call of Duty hater, the new Extinction episode is promising, and there are three solid maps here for the taking.