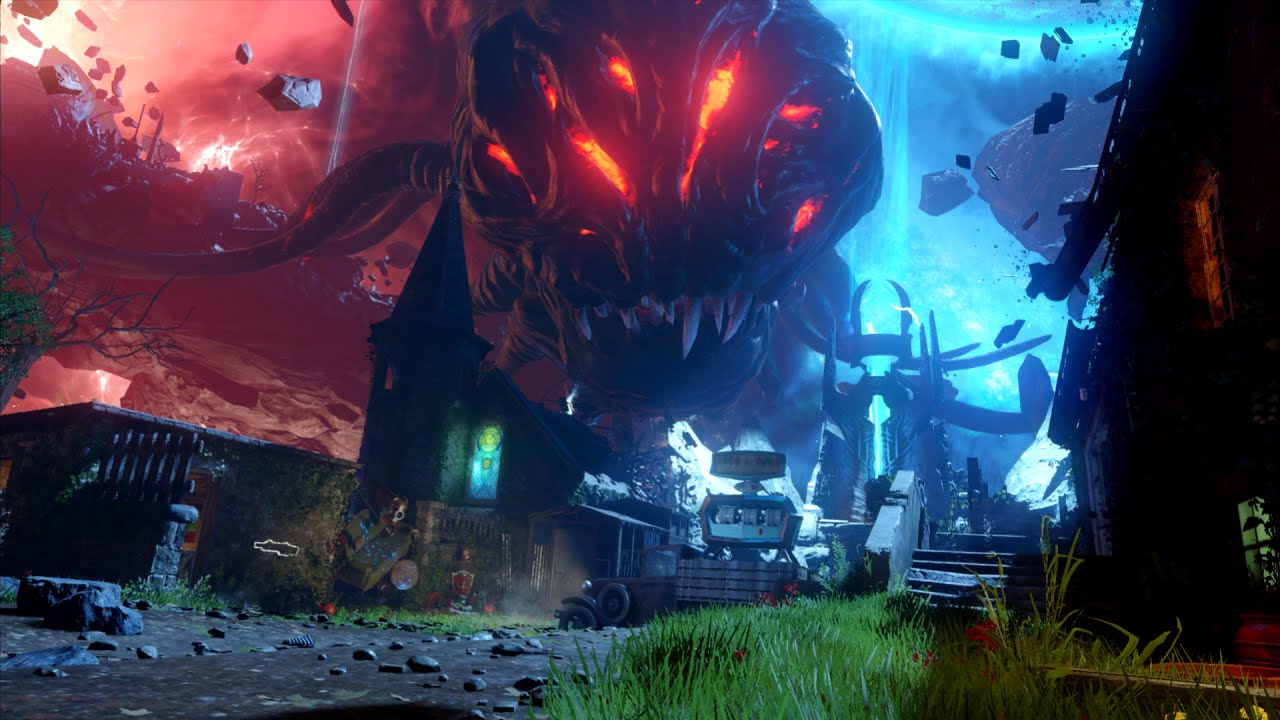 I had the chance to attend Activision’s XP event last weekend, and man did I play some Call of Duty. The publisher had everything from the upcoming Infinite Warfare to COD4 Remastered to the Black Ops III DLC, and my playtime with the latter really caught my eye the most.

Treyarch still has it, and outside of one weak map, the fourth add-on closes out the saga in a more than sufficient manner. 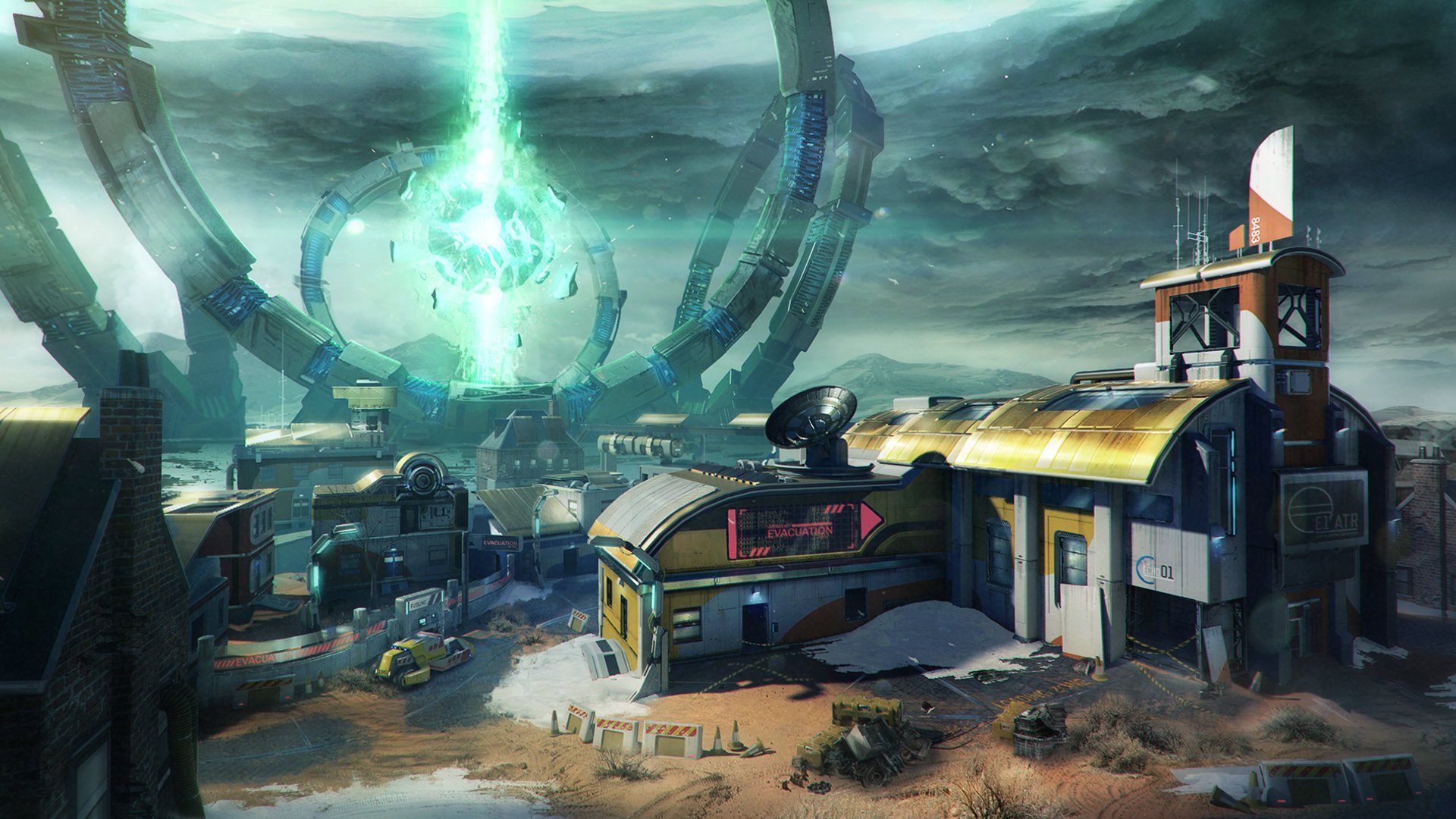 Let’s start with the worst of the lot — Rupture.

Not only is it a remake (which again, I’m fine with in theory, yet there’s already another, better one in the very same DLC), but it’s as stale as an unsalted bag of potatoes. As a mostly outdoors map with lots of funnels from tall outposts, matches tend to favor boring open chokepoints, with the surging core in the background serving as its only distinguishing characteristic. The story of a “futuristic preservation society” is intriguing but never explored, and the mechs that litter the map are slow and boring.

If Rupture comes up in the rotation, I usually cringe. 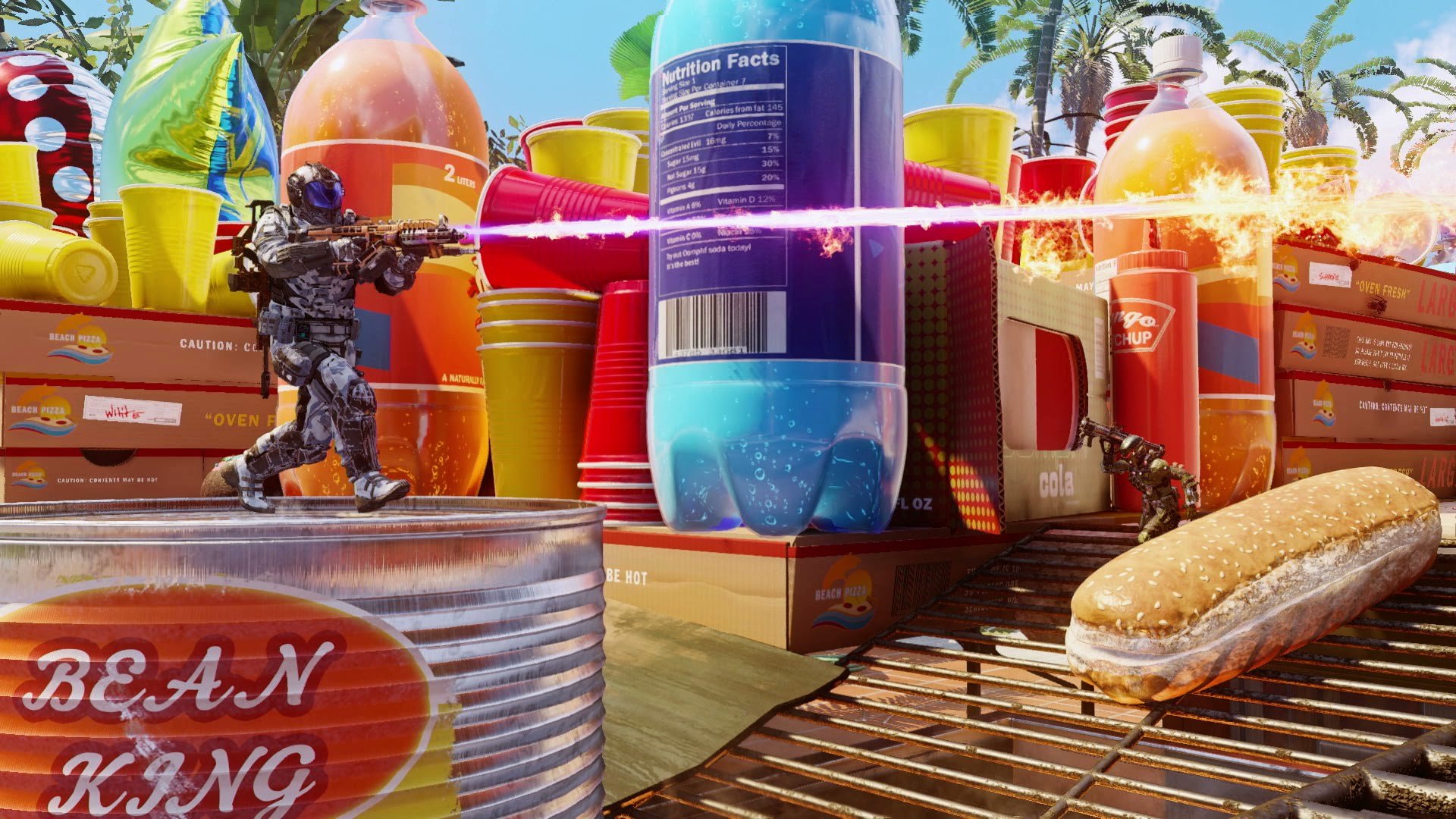 Switching gears by quite a bit, Micro is one of the craziest maps Treyarch has ever crafted.

For some unknown reason (it doesn’t really matter to be honest), players have shrunken down to the size of ants, and are battling it out across a gigantic battlefield filled with solo cups, empty pizza boxes, fizzing soda two-liters, and various “gamer” paraphernalia. It’s bright, it’s silly, and it’s hilarious.

The attention to detail is commendable too, like the mist coming from the ice or the “water” that’s actually a caffeinated beverage. It plays well on just about every mode and has plenty of opportunities for wall-running finesse. Micro is a new favorite of mine, and although DLC isn’t played at the pro level, I’d love to see some competitive matches with this map in tow. 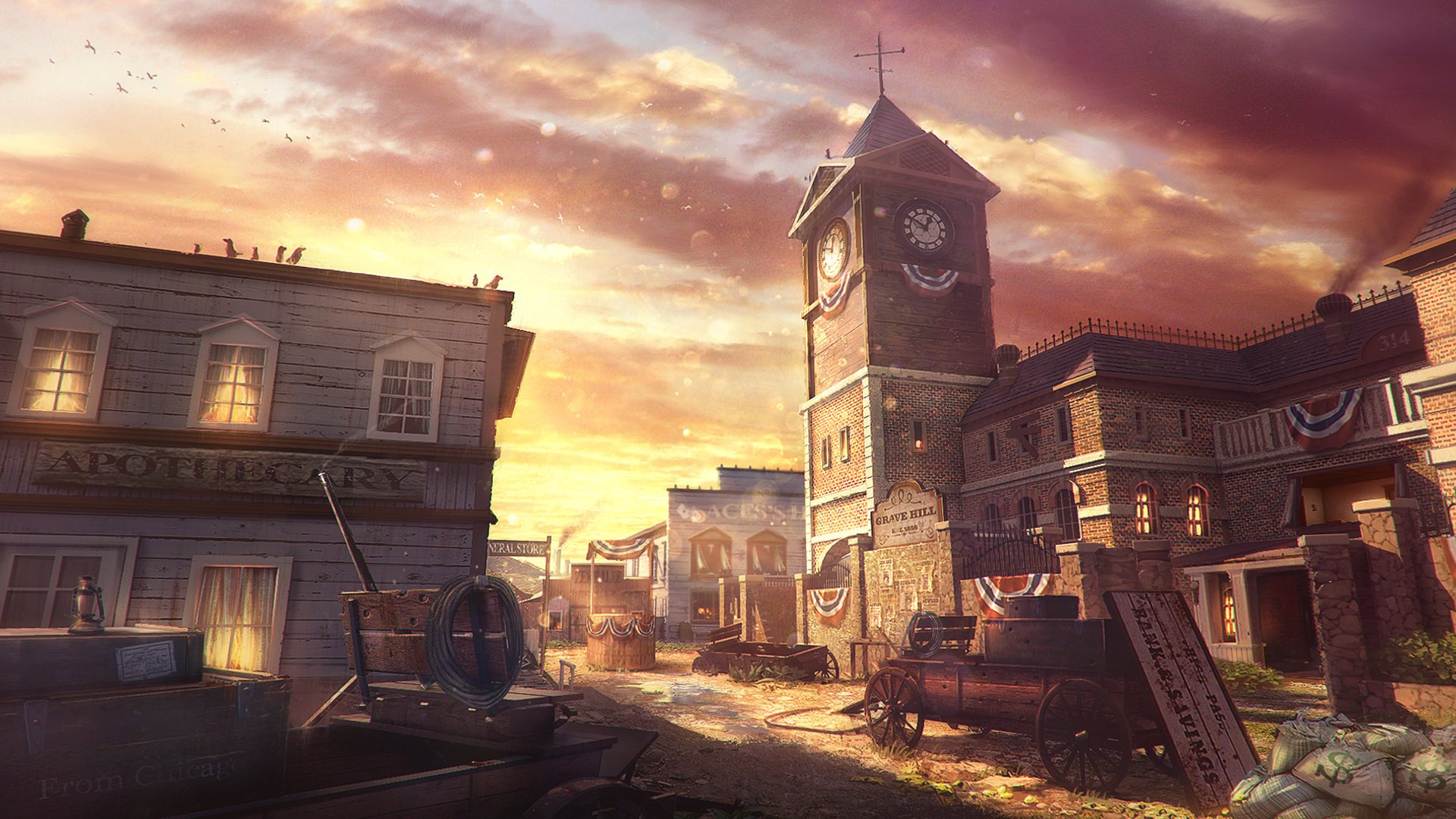 Here with are with another remake, but this time it’s warranted. Outlaw is a re-imagining of Standoff from Black Ops II from the ground up, and although my warning bells went off when I heard they were remaking a map that’s barely four years old, after actually playing it, I ended up getting used to the idea. Plus, I’ll always make an exception for “Old West” settings — what can I say, it’s a not-even-guilty pleasure of mine.

I couldn’t resist the urge to bust out hand cannons and go at it with all the close-quarters situations, and like Micro, it works on pretty much all levels from a gametype standpoint. Buildings along the perimeter have a sort of “pop-up” feeling to them, an unfortunate cheapness to their design, but the center — where most of the action is — feels more than fleshed out. (I still can’t believe that the team manages to put compelling artwork and props in to this extent.) 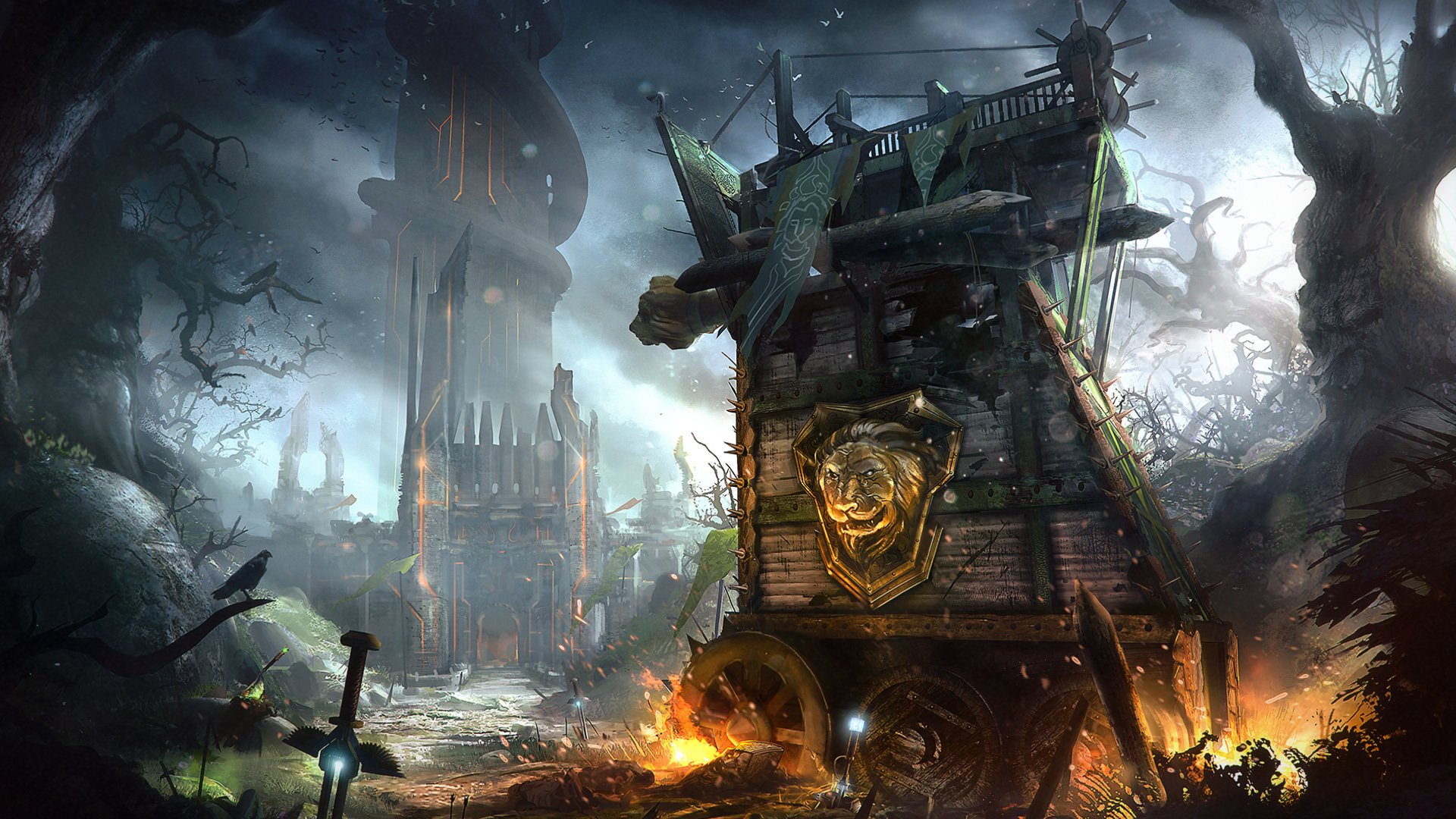 Citadel brings me back. I have vivid memories of playing Unreal Tournament OG on my PC and PS2 for practically days on end, and this new addition really captures the essence of that era of arena shooters. It strikes a great balance of corridor combat with expansive towering buildings that just…look cool, all of which lead to some exciting outdoor engagements.

The lush green theme also does a great job of staving off the “brown palette” criticism many shooters have these days. I think a little more effort could have gone into the “story” of the map; the tower where a “Warlock” once resided looks awesome, but the rest doesn’t really augment the concept. Still, it rounds out the other three and helps dilute the taste of Rupture.

The zombies narrative (so far at least) closes out with Revelations, which provides all the same chills and thrills you’d expect from the mode so far. Although the settings have started to gravitate towards overly-gothic setpieces in Black Ops III, they’re all sound, and I can’t comprehend how Treyarch can keep packing in Easter eggs like this. Revelations breaks that convention though with an almost fairy tale-like (but still dark and gothic) level and an admirable likeness of Malcolm McDowell.

The way you’re basically tricked into a story in what is essentially a horde mode is masterful at this point. If you don’t care about zombies at all and want to just blow stuff up, arcade style, you can do that. Or, you can listen to the various vocal queues and discover the map’s endgame and secrets organically. Even some of the most ardent Call of Duty opposition has found themselves enamored by the mode, and for good reason — it feels like a completely different game.

Yet, as I told several Infinity Ward developers last weekend, I’m a little over the original World at War zombies cast. Their quips are predictable, as are their adventures, and I hope that Activision as a whole (within the confines of the three Call of Duty developer stables) doesn’t return to them. I get that it can be expensive to pony up for a Hollywood voice cast that includes the likes of Seth Green and David Hasselhoff — but it would be great if they could lock them up for future DLCs and have a cohesive story to tell without having to rest on the laurels of Tank Dempsey and crew. It hurts having to look at the Shadows of Evil cast on the loading screen and know they only get one map.

When the zombies mode returns, it’ll be in Infinity Ward’s capable hands with the Spaceland storyline in Infinite Warfare, and I just might get my wish. But for now, the book on Black Ops III has been closed. Although it had one bumpy DLC chapter, things are pretty encouraging overall. If you want to grab the season pass or the inevitable Game of the Year Edition, you can do it without shame.