About an hour into Calico, I reached the icy mountain peak of this magical island and found a couple of capybaras chilling in a hot spring. It was a pleasant scene, but I was still getting used to the controls. I walked up to them, intending to give a nice petting, but I hit the wrong button and accidentally picked one of the giant rodents up over my head. In trying to fix the situation, I pressed the wrong button again and mounted the other capybara. I was annoyed that I’d still not gotten all the button commands down pat, but then I could only laugh at the fact I was playing a game that would even allow me to do that in the first place. 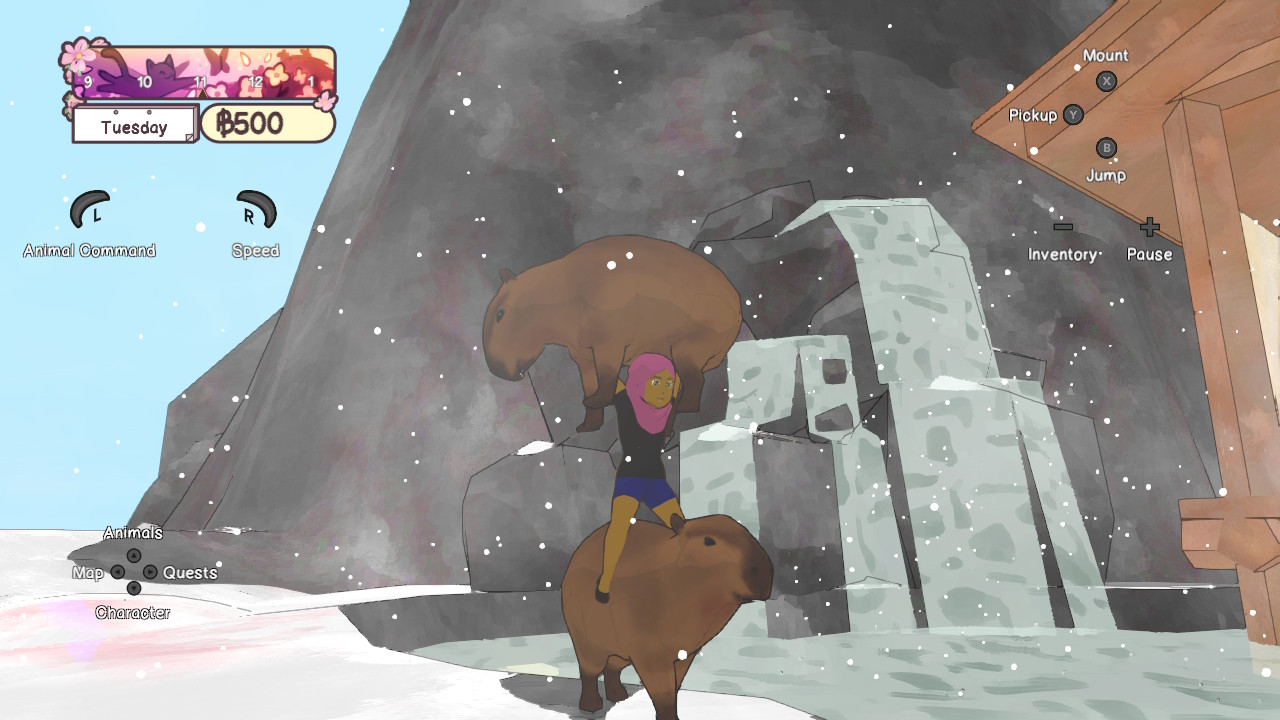 You might be wondering what hot springs and capybaras have to do with a game about running a cat café, but you should know Calico isn’t really about running a cat café. Yes, the first thing you do after creating your character is learn how to put down furniture at your café and get animals in there, but that’s not really what this game is about. Rather, it’s about reuniting an island and running errands for the townsfolk.

Set on a beautiful island brimming with pastel colors, you play as the niece of the cat café’s former owner who arrives to reopen the family business. Everyone on the island — an inclusive mix of witches, gardeners, dancing kids, and cat people — is happy to see it return, but they’re much happier when you’re doing their jobs for them. Deliver this package, make this recipe, add this piece of furniture to your café; that’s the bulk of the experience here. The café is basically a red herring to its true nature as a magical message girl simulator.

Calico is so unconcerned with running the cat café that as soon as you learn the basics of it, it pretty much brushes it aside to get you to task reunifying the island. The different areas of this magical girl paradise are splintered by rockslides, poison flowers, and tired cat construction workers. You need to figure out how to reopen every path, something you can do in about two hours if you just want to see the credits as fast as you can. Like the errands you run for the residents, rejoining these different areas doesn’t require much more than talking to the right person. Some might say this approach provides a relaxed experience, but I’d argue it’s simply unengaging.

It didn’t take me long to grow tired of the shallow gameplay loop, but Calico‘s sillier mechanics added a bit of whimsy to the otherwise pedestrian experience. As you travel around the island, you’ll come across cats and other animals you can introduce to your café. When you pick one up, one of the options you have is to rotate it in your hands like it’s an object in a survival horror game that’s hiding a key on the bottom. You can also just wave the animal around in your arms as if you’re including your cat in your daily exercise routine. You can even wear these animals on your head. These are pointless features for sure, but appreciated nonetheless. Speaking of silly, your character’s run animation is unlike anything I’ve seen in a video game.

And then there’s cooking.

When it comes time to cook or bake something for your café, rather than doing a mini-game of sorts or picking from a menu, your character will shrink down to the size of a salt shaker to throw the now-massive ingredients into the mixing bowl one by one. And you have to throw, which means you have to aim. Before I got the hang of it, I had to chase two eggs down to the other side of the counter after over-shooting the target.

You’re not the only one in the game whose size can change. One of the first things you do is gain the ability to shrink or enlarge your four-footed friends. To reach the top of the snow-capped mountain, you need a giant cat to break through the path. So you kidnap one of the local cats, spray it with this potion, and poof, you have a giant ridable cat. 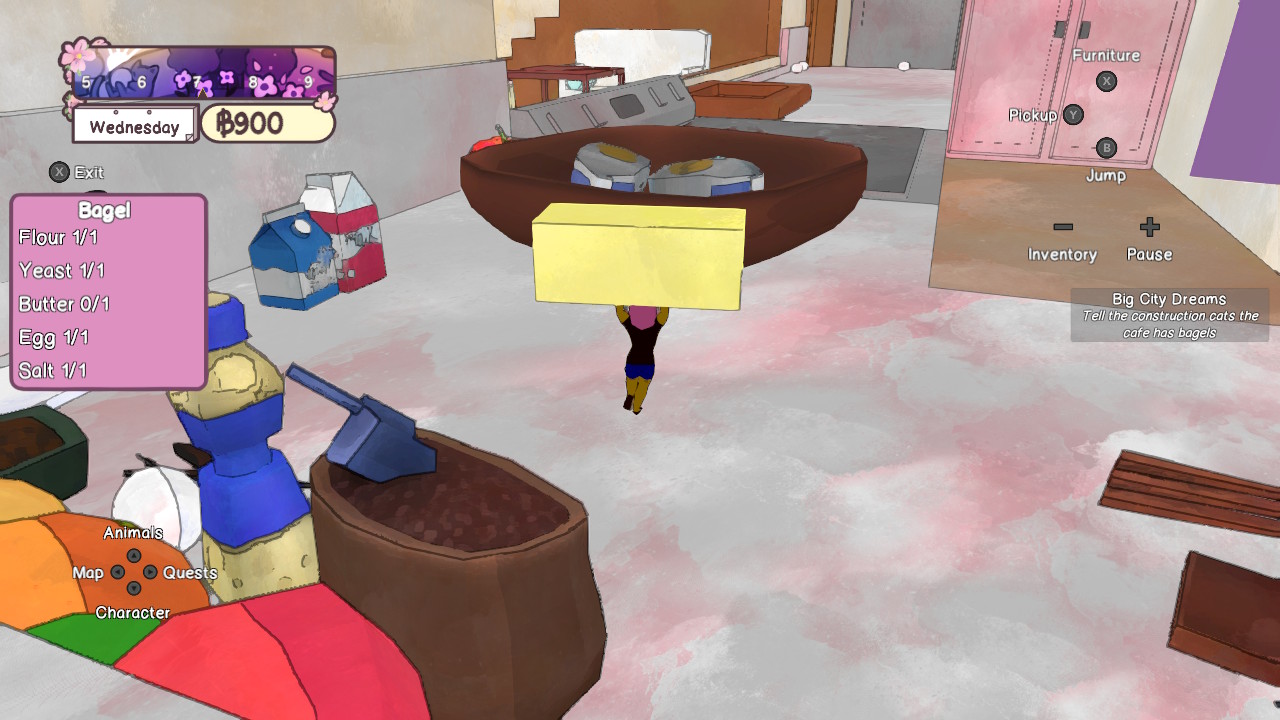 And you can use that on almost any creature in the game. About halfway through my time with Calico, I found a horse running in a meadow and decided my cat café could really use a miniature horse. So I shrunk it down and took it back to my place. I did the same with a polar bear, an arctic fox, and what I think was a honey badger.

I had a lot of fun shrinking and super-sizing the different animals of the island, but I found a lot more joy in seeing the amusing ways in which Calico is janky. Customers of your café will dissolve through doors or windows to get to their seats. Animals tend to walk right up a wall like they’re Brandon Urie in the “High Hopes” video. When you have cats following you, they can start to freak out like they just did a line of catnip.

Residents will often reference a requested job as being completed before you actually did it, like thanking me for adding a bird to my café yesterday when I only finished that task two minutes before. When you reach the city section of the island, cats will just walk in place rather than move around the streets. Your mounted animals can run straight down a mountainside if you don’t want to bother taking the path. In fact, you can just jump from any elevation you want as there is no health or damage to worry about. 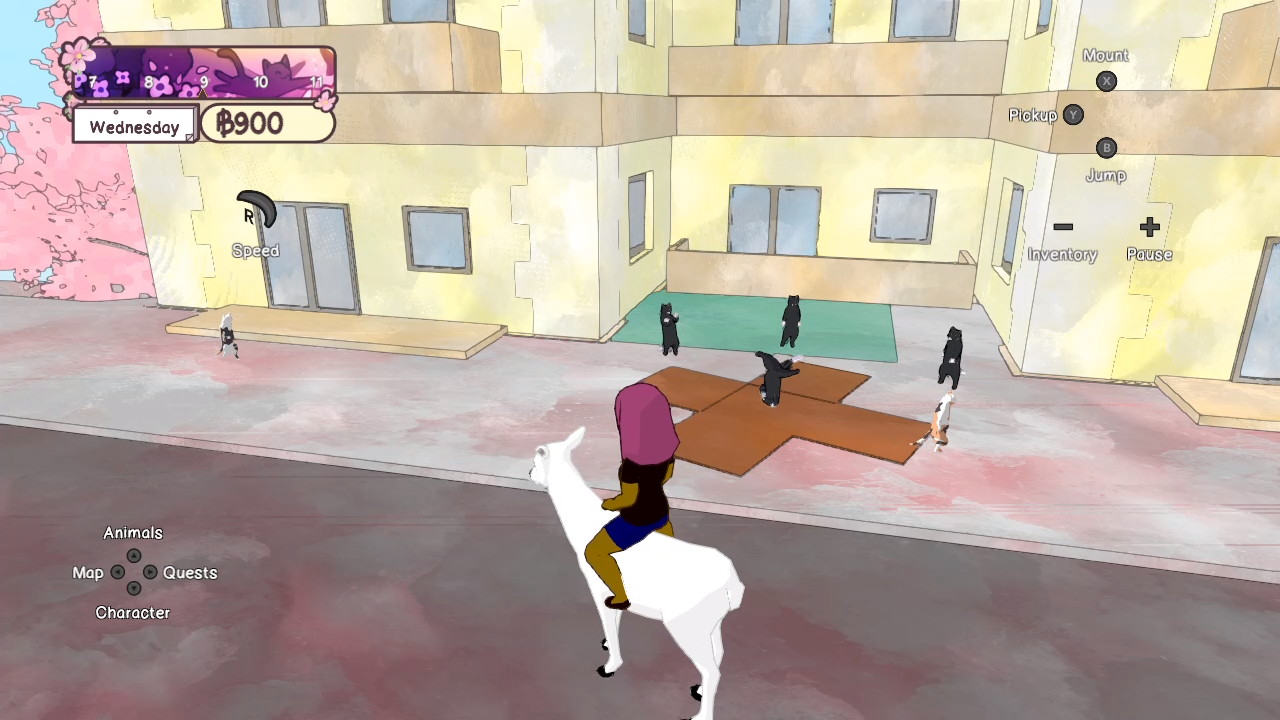 Not all the bugs are giggle-worthy. Every time I put a piece of furniture down, the game starts to freak out as though it’s about to crash. When residents come to the café, they often have a hard time leaving or will clip directly into the floor or furniture. I had to restart the game after two residents trapped me in my café when they clipped into one another and blocked the only exit. I’ve had animals necessary for completing a quest completely disappear on me. The frame rate is pretty okay on Switch — at least with the latest version — but pop-in is frequent, and walls, trees, and buildings can completely block your view as they’re not designed to transparentize when obstructing your character.

The worst thing I can say about Calico is that it’s undeveloped. While the entire experience can be described as relaxing, running the cat café isn’t all that interesting and most of the tasks you’ll complete for island residents boil down to the same two or three objective types. Anytime you’re doing something other than those two activities, it’s rather aimless. While its basic premise doesn’t have a strong enough foundation to carry the experience, Calico manages to luck out in that its undeveloped nature and general wonkiness add to its charm rather than subtract from it. The “cute factor” does a lot of heavy lifting, and I could almost argue a lot of the design elements here “think outside the box,” but I worry I’d be giving too much credit to a game that’s just not entirely well-made.