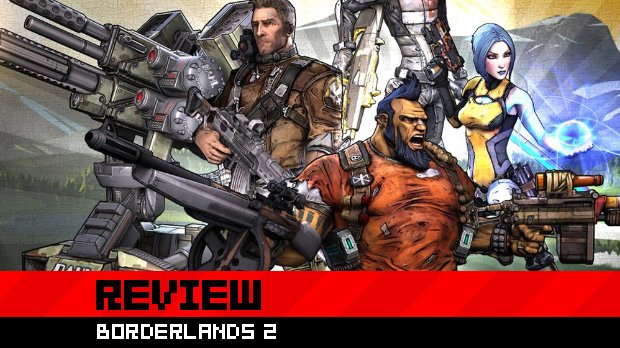 Borderlands 2 is built upon the age-old axiom that if you throw enough money at a good idea it will become an even better one. And the original Borderlands was most definitely a good idea.

Borderlands may have been about loot, but its sequel is about more. Watching each crate mechanically unfold and seductively present its contents still drives the game forward, but Gearbox now surrounds the loot-a-thon with a more colorful world, ingenious combat, and what is easily the funniest, cleverest script to grace a game since Portal 2. 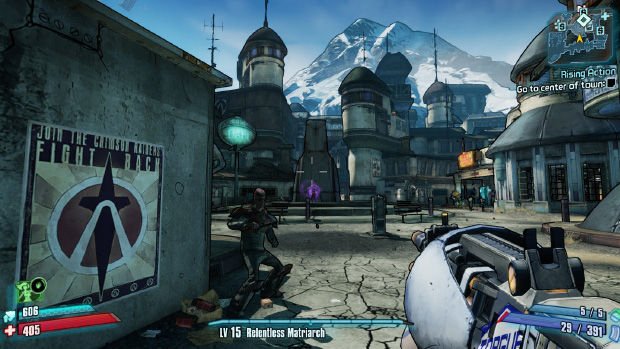 The first Borderlands was built upon the very simple concept of making a Diablo-esque RPG within a skill-based first-person shooter. The appeal of such a pairing goes far beyond acquiring loot in the form of randomly generative shields, grenades, buffs, and possibly more weapons than every other first-person shooter combined (we still have our mathematical hamsters crunching the numbers).

But what I love about Borderlands isn’t the loot addiction. It’s that such a system is used to turn the modern shooter on its head. Yes, Borderlands controls and feels nearly identical to Call of Duty. However, the game frequently demands you relearn the genre and discover new strategies for success. Nearly every weapon and enemy makes you approach the game in a different way.

Some guns will become more accurate the longer you hold down the trigger. Others can be thrown when you empty a clip, and they’ll fly through the air, chasing enemies like a phantom shotgun. Some enemies will evolve into more difficult forms if you don’t kill them fast enough. Others will pop out of treasure boxes and whoop your ass so bad you’ll wish you left them closed. Pandora is a wild world where you never know what you’ll find next, so it’s a good thing you have some familiar faces by your side.

I completed the first Borderlands but can’t tell you much about the story. I know where it begins and ends, and I also know I didn’t follow the rest out of disinterest. But if the visuals and combat of Borderlands 2 are a sensible step forward, the improvements in narrative and writing is a stuntman jumping over the world’s longest chasm. Borderlands 2‘s story is so good that it fools you into thinking the first wasn’t so bad. Rather than brushing off the first game, this sequel owns it and carries on the most beloved elements from it: the world of Pandora, the four heroes, and their foul-mouthed, incompetent robot friend Claptrap. Though the heroes are now relegated to being side characters, they feel more fleshed out — strangely more than the new playable heroes that fill in during their absence.

Just as it’s hard to separate writer Eric Wolpaw from Portal, it is hard to look past Anthony Burch’s (Hey Ash, Whatcha Playin’?) writing voice and influence all throughout this game. Burch brings us Handsome Jack, who will go down as one of the greatest videogame villains of all time. He has the Joker’s indifferent, chaotic attitude and Tony Stark’s cool, sarcastic personality, and he’s a hellbent jerk who often brings to mind Gary Oldman in The Fifth Element. He’s just cruel and twisted enough for you to hate him yet still manages to walk that thin line of being lovable in a GLaDOS kind-of-way. He makes the game special, but he’s not the only one who does so. 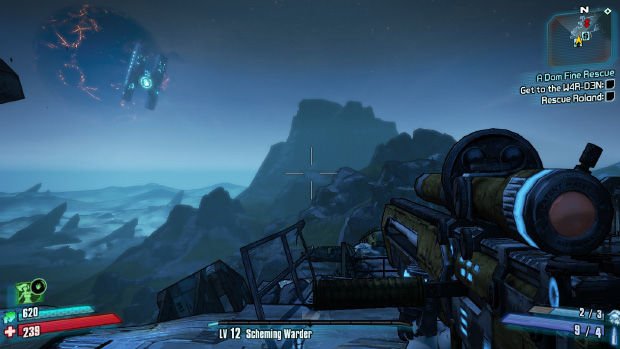 Almost every quest giver and NPC has their golden line of comedic dialogue, if not more. The proud, rotund mechanic Ellie, gentleman explorer Sir Hammerlock, and Handsome Jack are all likely to appear on our best characters of 2012 list. Some will hold a special place in the hearts of players more than others — foul-mouthed redneck Scooter is a bit of a cliche, and 13-year-old psychopath Tiny Tina (voiced by Anthony’s sister Ashly) is kind of obnoxious, but even they have some great lines. Don’t worry: Claptrap still has the best lines of all (“Your ability to walk short distances without dying will be Handsome Jack’s demise!”), and you’ll miss him whenever he’s not tagging along on a mission.

Unlike the first Borderlands, the great humor isn’t limited to the characters. The missions contain the funniest parts of the game, often filled with subtle details and punchlines that will make you laugh out loud. In one mission, which has to be a contender for the shortest mission to ever grace an RPG, a guy begs you to shoot him in the face, so you do and immediately receive a reward. From throwing Claptrap the most awkward birthday party ever (poor guy!) to delivering pizza to some Teenage Mutant Ninja Turtles wannabes, Borderlands 2‘s offbeat humor has a way of making the forgettable side missions into memorable plot lines. Some side missions will even ask you to solve a mystery or riddle, offering a change of pace from spamming bullets at things.

I played the majority of the game solo, and only twice did I have to complete a side missions for additional leveling. Borderlands 2 only has one difficulty setting — excluding the “new game plus” feature which raises the stakes — but it’s one of the most well-balanced shooters I’ve played in some time, which is something of a miracle when you consider all the random variables at play. However, that’s just my experience. Maybe I’m just good, maybe I just picked the right class (Siren), or maybe I just got really lucky with loot. One thing’s for sure: Borderlands 2 is no cake walk, and there is no shame in getting help online. Unfortunately, that doesn’t always work as it should. 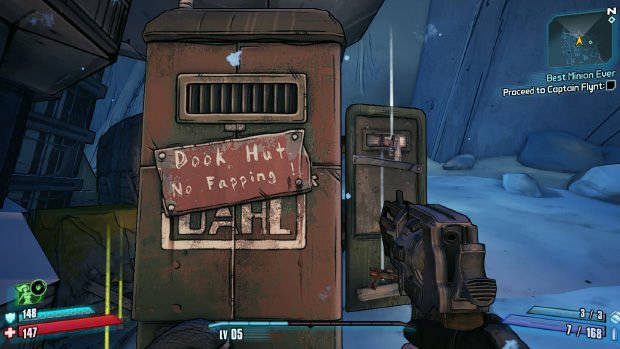 In addition to experiencing minor lag in some matches, the co-op in Borderlands 2 is unbalanced when you don’t play with people the same level. Enemies and loot will be set to the host’s current level, which makes for a fruitless affair for higher-level characters and a miserable time for lower-level characters. Unless you are just there to have fun with your friends, it’s hard to see why someone would play online with players of varying levels. As a level 18 player helping level 13 players, I only earned 1 XP for each enemy killed and all the loot was old junk. You’ll want to start the game with a posse or at least seek out same-level players.

In many respects, the game can be just as unbalanced solo. You’ll struggle to kill some of the hardest enemies in the game, which only give you a few XP. Meanwhile, you can acquire major XP from easier enemies elsewhere. What’s most frustrating is that the game doesn’t level-up enemies alongside you, so going back to past areas often feels like cheating. It’s almost comical to jump around with armor that kills enemies just by their striking you, while you kill almost anything with a single shot from a pistol. Meanwhile, other areas become populated with higher-level creatures, so it feels like something is missing. Maybe DLC will repopulate these areas with tougher foes, but that doesn’t excuse such an oversight.

While the main story is compelling, the main missions are a bit trite. They all boil down to destroying “all the things,” reserving any creativity to the side missions. For a world brimming with so much character, I expected Gearbox to aim higher in its mission design. As much as I loathe the cliche turret and vehicle mission in first-person shooters, it’d at least give Borderlands 2 some much needed variety. Instead, turrets are rare and incredibly weak, while vehicles are used merely for getting from A to B in large areas. Endlessly shooting things still makes a great time, but it does get old after a while, and make no mistake, you will be shooting for a long, long while. 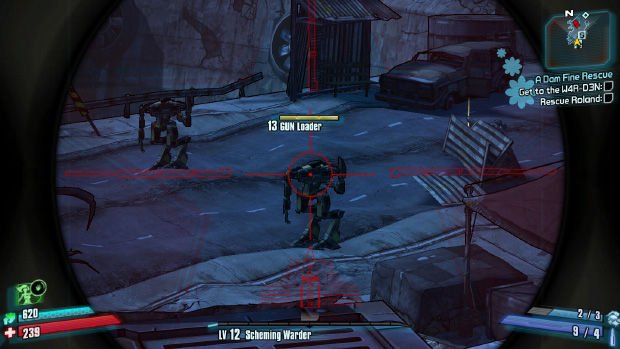 Pandora’s new gang of four each play similar roles to those of the first game, but there is now enough customization to set them apart. The tech tree in Borderlands 2 is more fleshed out, letting players lean on defense, offense, or buffs. I’m disappointed that each character only has one main ability, but at least there are dozens of ways to modify it. You can also now customize your character’s face and body with collectible skins. You can’t make your Siren morbidly obese, but you’ll at least stand out from others online.

Everything from the menus to the controls have been improved, but some nagging issues from the previous game remain. A mini-map makes navigation easier, though not easy enough. The waypoints often misguide you, some of the mission hubs are so vast that you won’t know whether your objective is below or above, and it’s almost always a long trek between the two. The game could also stand to be more generous with its fast travel system — the kiosks are far and few between, which makes for many long walks, and you’ll pray for death if your vehicle ever breaks down.

PC players will be happy to know that the game comes with some great customization options and looks stunning with settings maxed out. I was able to run the game at a very smooth framerate, despite having everything turned up high. The UI and controls are much kinder to keyboard/mouse players than they were the first time around. Due to hand cramps, I switched between keyboard and controller but preferred the added accuracy and shortcuts that the keyboard/mouse combo offer. My only complaint is that there is no offline co-op, but that has more to do with Steam than Gearbox. 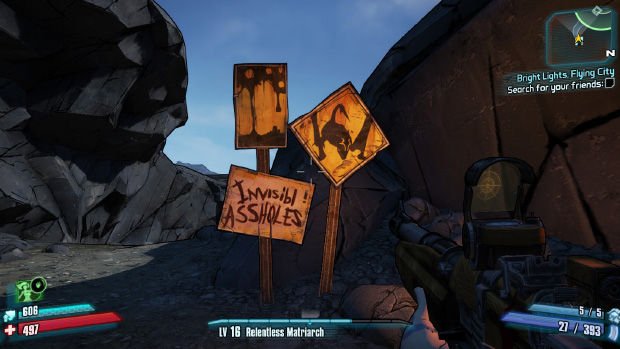 Borderlands 2 is about 30 hours long (40+ if you want to complete all the side missions), and the above issues hardly detracted from my time with the game. I love doing tricky Crackdown-like jumps to acquire hidden chests, miraculously killing a boss while I’m downed on the ground, and opening a toilet to discover my new favorite rifle.

If you are up for a good laugh while shooting things in the face, Borderlands 2 is a worthy game to add to your collection. Soon enough, you’ll see numbers popping above people’s heads in real life and will feel compelled to search every Porta Potty on the street for cash.