Like a Halloween candy bar: a little nutty but smaller than you’re used to

Borderlands 2‘s huge array of downloadable content has inarguably had its ups and downs. At its worst, we have seen simple cosmetic additions like new outfit colors and heads (which seem doubly silly considering the game’s predominantly first-person perspective). At its best, we’ve experienced a truly heartfelt story inside of a substantial campaign addition, with a plethora of new enemies to fight in Tiny Tina’s Assault on Dragon Keep.

The new Headhunter series of DLC aims to be something in between those two extremes. Rather than providing a substantial set of side story missions across several locales, the Headhunter content intends to be more bite-sized, with a price to match. T.K. Baha’s Bloody Harvest is Halloween-themed, so perhaps “fun-sized” is the more apt adjective to use, and while shooting things in the face while numbers fly out is as fun as it has ever been, there really isn’t much new to find here. 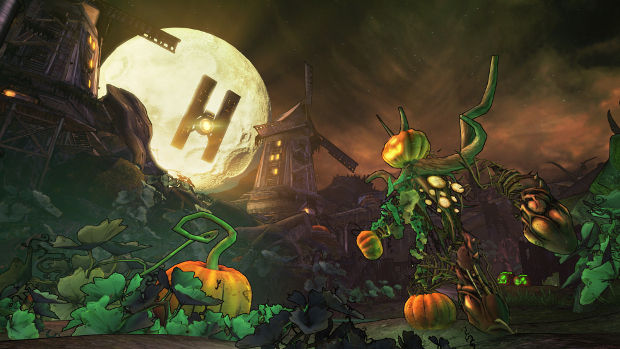 The story in Bloody Harvest is basically nonexistent. After fast traveling to the new area Hallowed Hollow, the player is instructed to meet up with zombie T.K. Baha on the outskirts of town. Baha informs the Vault Hunters about the Pumpkin Kingpin, who has been vaguely terrorizing the town. Thus begins the first of the two missions included in the DLC: find this boss and kill it.

The Hallowed Hollow is the only area in Bloody Harvest, and it is about the size of Frostburn Canyon from the original campaign. Inhabiting most of the Hallowed Hollow are undead skeleton bandits that act identically to their living counterparts but have a resistance to fire weapons, making them a bit more of a pain to defeat. Other enemies include Spiderants and Skrakks, with no substantial changes to their behaviors or attributes.

The only new enemies are the Pumplings, which are animated jack o’ lanterns that appear in random locations and chiefly focus on melee attacks. As the most thematically appropriate enemies, they are disappointingly easy to dispatch, with enormous critical hit spots. That said, the minimal variety they bring is appreciated among the retreads and reskins.

Buffs like those found in Assault on Dragon Keep are back, but they are easier to come by in Bloody Harvest. Rather than paying an Eridium cost at specified shrines, enemies and loot piles will drop various candies, color coded for different effects. One such effect is to have quickly regenerating ammunition, which opens up new strategies like constant rocket launcher or Tediore weapon use. It’s a small thing, but it can change gameplay for those open to adapting play style. 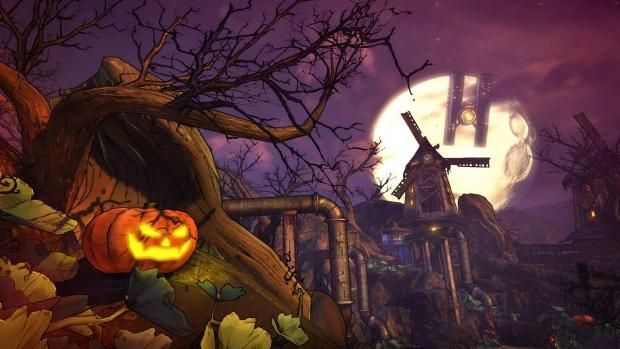 Though there is no real story to speak of, the dialogue is about on par for Borderlands. Bloody Harvest lacks any laugh-out-loud moments, but T.K. Baha does have a few grinworthy lines, including a few callbacks for long-time fans of the series.

Really, there is not much more to say about T.K. Baha’s Bloody Harvest. Included in the DLC are one new area, two new missions, one new enemy, one new boss fight, a new head customization, and not much else. Playing through once takes less than an hour, and could probably be speedrun in less than twenty minutes. Players expecting something on the level of Assault on Dragon Keep will be sorely disappointed.

What’s here is decent, there just isn’t much of it. Though the Headhunter content costs about a third of what the earlier downloadable packs cost, it doesn’t provide even close to one third the amount of gameplay. Hardcore Borderlands 2 fans who desperately need more to do or just really want a pumpkin for a head might be interested, but most everybody else can afford to pass on this one without missing much.