Borderlands has often been described, perhaps not unfairly, as “work.” In the sense that it can be repetitive and monotonous, yes, but also in that it’s largely driven by a kind of materialistic consumerism. There’s not that big a difference between, say, farming Scorch for a Hellfire SMG and spending 40 hours per week doing data entry saving up for, I dunno, a new watch.

Captain Scarlett and Her Pirate’s Booty — and this is a misnomer, actually; the eponymous booty belongs to one Captain Blade, and Scarlett is trying to find it, with the help of a rather dashing Commando in green — introduces clever wrinkles into the game’s ethos.

The mechanics of piracy and Borderlands are more less identical (i.e., taking things by force that don’t belong to you), which makes Captain Scarlett a natural fit into the world of Pandora. But life aboard Scarlett’s ship suggests a broader economy that isn’t as closed off as the one in which Vault Hunters participate. Borderlands may be work, but piracy is a business.

(I guess Hyperion Corporation is also technically a business, but its CEO rides a horse named Butt Stallion, so who knows?) 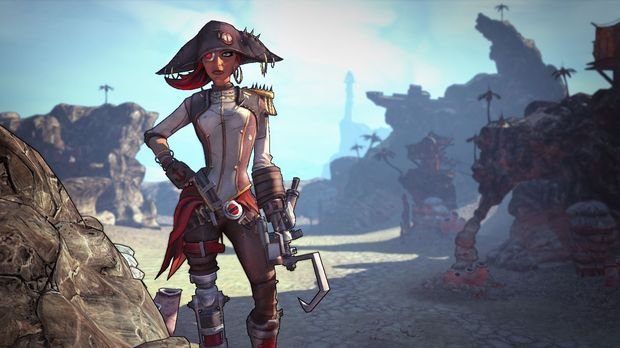 After playing hours and hours in a positive feedback loop of murdering crazy people and taking their guns (so as to more easily kill more crazy people), it’s interesting to see how Blade and Scarlett interact with their respective crews. The profits from the killing and looting and exploding and dismembering they do ostensibly goes to, say, buying fruit to prevent scurvy, paying wages, and mending ships.

There’s a tension between the pirates’ relative open-handedness and the Vault Hunter’s individualism, but Captain Scarlett stops at merely suggesting this thematic texture without dwelling on or exploring it: for better or worse, Borderlands is not a game about business or about feelings; it is a game about shooting.

And in Oasis, you can do that from a sand skiff, and you can do it to a variety of different enemy faces. Exploding harpoon is my favorite version of new hovercraft introduced by the Captain Scarlett DLC, but you may be partial to saw blades or the more pedestrian rockets. Most of the new creeps are simply re-skinned bandits — psychos become grogmasters, midgets become cabin boys and swabbies — but there are a few quirky variations.

Corsairs are pirates that can disappear and re-appear somewhere else (similar to Borderlands 2‘s stalkers), cursed pirates steal health with melee attacks, and harpooners can wreak havoc with your positioning by spearing your Vault Hunter and dragging him around the map.

These aren’t major revelations, but Borderlands‘ inherent repetition tends to highlight and exaggerate any nuance or shift in the core gameplay. These new types seem to represent minor changes to enemy design, but they stand out clearly against the game’s standard goons. 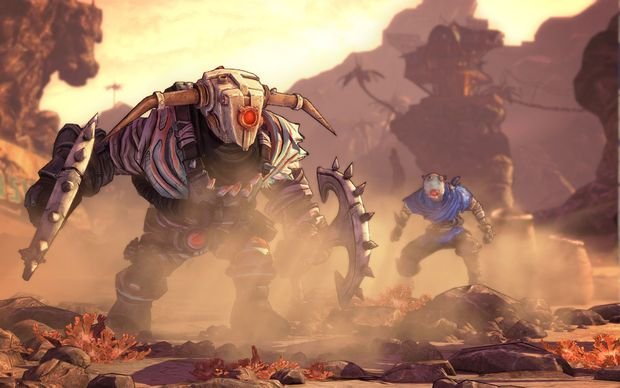 The game’s themes and enemies feel new and interesting, but thoroughly within Borderlands‘ wheel house. This appropriation extends to the writing as well: Captain Scarlett does a great job bringing competent pirate genre fiction to life. This DLC is all mutinies and treasure maps and peg-legs, but it feels right. What Borderlands 2 does to Westerns, Captain Scarlett does to pirate adventure.

True to form, the new hub town of Oasis is vast. The new characters and enemies make Captain Scarlett feel weighty on its own, but the sheer volume of space and content give the package a sprawling, languid feel. Part of this is just the raw time needed to complete the story and Borderlands‘ now-familiar filler quests, but it’s also structural and environmental.

Several Fast Travel and Catch-a-Ride stations dot numerous and varied landscapes, from the skanky Panama City Beach-like town of Oasis, to abandoned dockyards, to a Hyperion refinery. So much of Pandora feels frigid and cold — Frostburn Canyon, the Tundra Express, the Fridge — that it’s nice to head to the beach for a change. Hayter’s Folly, a subterranean grotto-cum-pirate-cove, stands out as the most evocative of Captain Scarlett’s environs. 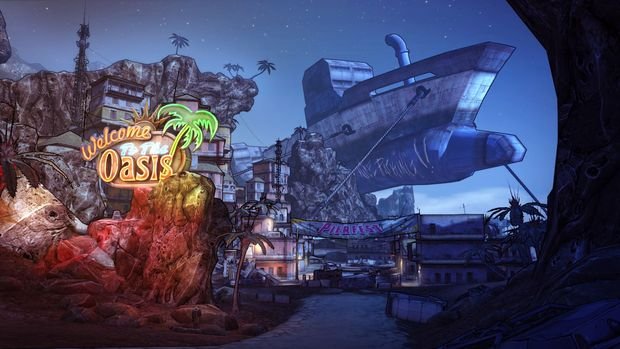 As seamlessly as Captain Scarlett fits into Borderlands 2 proper, it’s obvious to me that this was clearly designed to be post-game DLC. Quests, loot, and enemies of course scale to the current level of any wayward adventurers that stumble into Oasis (indeed, the town is immediately accessible from any Fast Travel station), but my advice is to nevertheless wait until you’re finished with at least your first playthrough.

Narratively, Captain Scarlett stands as a vignette or short story, independent of the travails of Handsome Jack, complete with its own chapter-numbering scheme. But the real case to be made for the delay is mechanical: jumping into a scaled-up Oasis at, say, level 20 like I did will drastically over-level your character once you resume the main quest.

More interesting is the creepy vendor in Oasis that refuses to deal with you until you’ve obtained a Seraph Crystal. This new currency is, as far as I can tell, tied to the last, optional quest in Captain Scarlett, which is hard-locked to level 50. Being severely under-leveled, I haven’t traded with the Bobbum Man, but some digging reveals a supposed pink weapon tier only available in Oasis.

Captain Scarlett‘s end-game shenanigans notwithstanding, this remains a thorough and thoughtful addendum to Borderlands 2. It’s funny and confident in its storytelling and presentation with enough variation in enemy design and mission structure to stand out against the enormous backdrop of the core game.