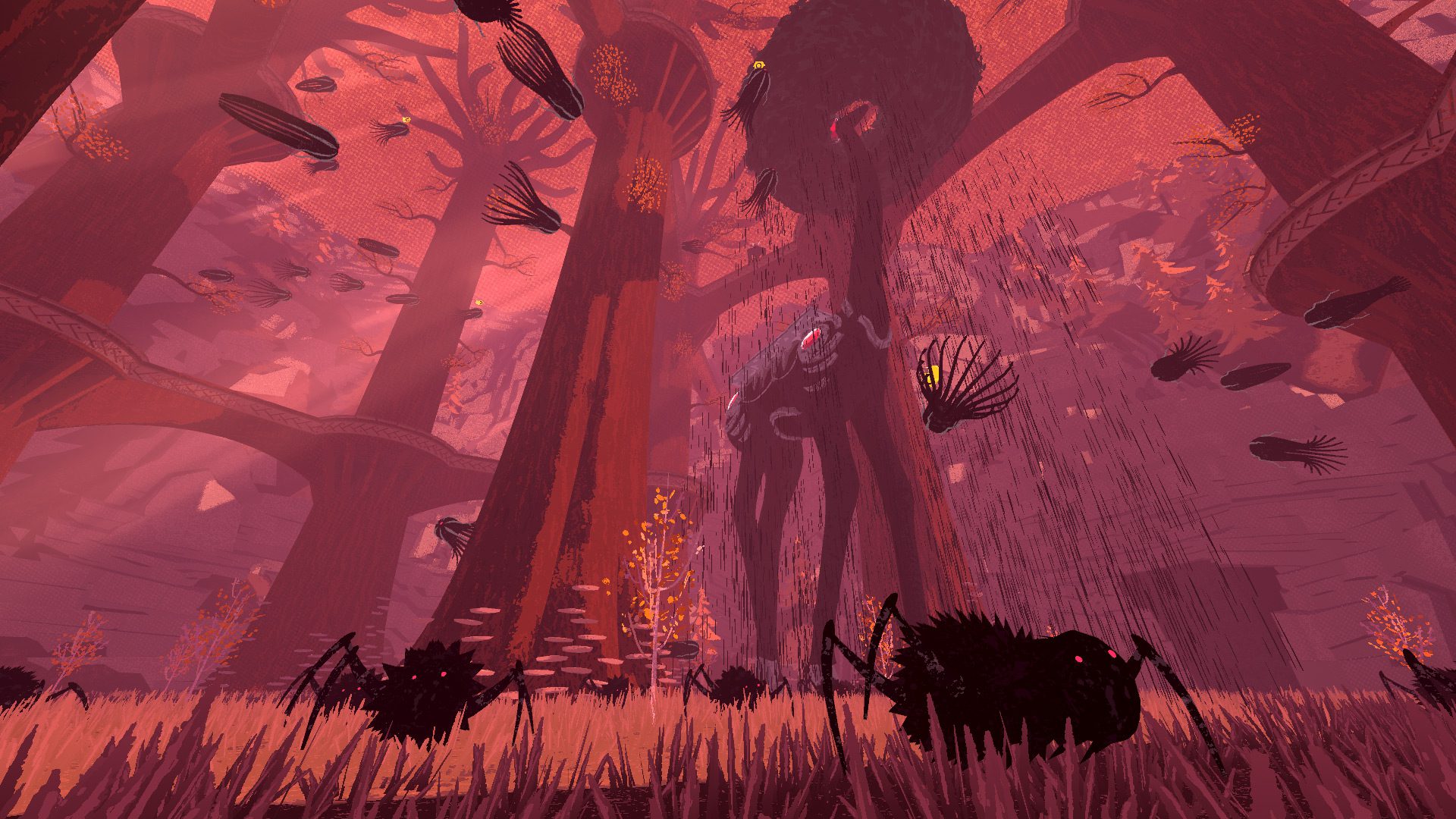 It feels fantastic to fling your bladed boomerang — and, by extension, your mystical mummy self — around in Boomerang X. Considering this is an arena shooter with all of the good stuff and none of the fluff, that counts for a lot. It counts for everything, actually.

This is one of those frantic action games that makes you feel cool right out of the gate, and as the enemy archetypes (and your abilities) ramp up to require extra finesse, faster reflexes, and better threat prioritization, the feeling only grows more intense.

After previewing Boomerang X in April and loving it, I’m stoked to return for a full review. 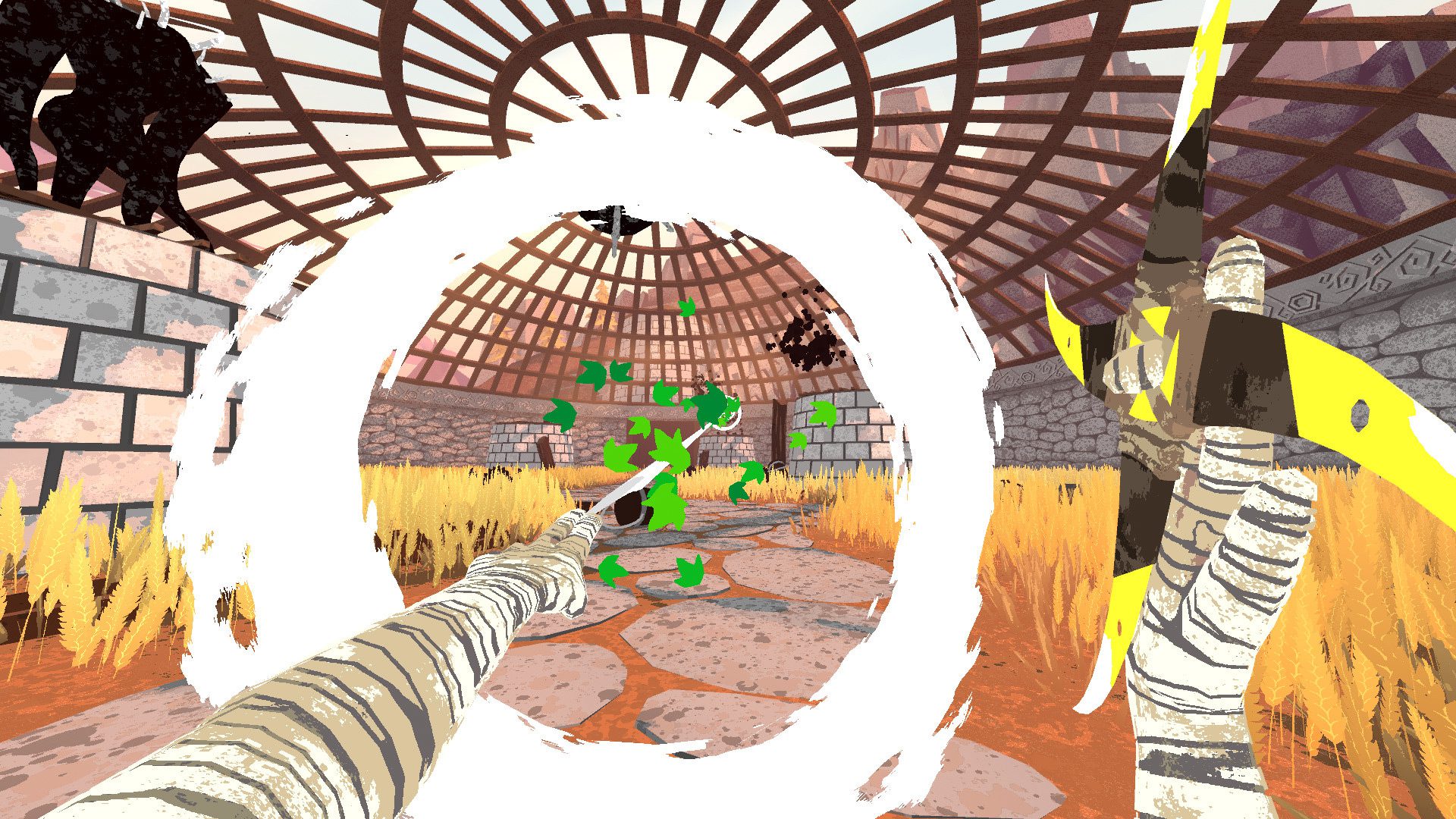 What I said back then still stands today: this is a lean aerial arena action game that’s as challenging or effortless as you want it to be thanks to smart customization options. Either way — whether you’re speedrunning it in under an hour with no gameplay assists or you’ve got invincibility, lock-on, and other toggles flipped on — it’s a satisfying crunch.

My first no-filler playthrough took a couple of hours to finish, but I’ve since come back to beat it two more times, as well as rerun individual arenas a bunch for sub-three-minute clear-time achievements, and pull off other feats like beating a zone without ever touching the ground. How does one do that? It’s surprisingly simple to pick up.

Though you’ll start off with limited abilities as a wrapped-up hero who has washed ashore an “abandoned” island, it’s not long before you’re flinging an all-powerful boomerang at monsters and zipping through the air. You click to throw it (or hold and release your click to throw it farther), and you can right-click to call the weapon back prematurely.

Air dashing? It’s as easy as chucking the boomerang and clicking your mouse again while the gizmo is still mid-air to hurtle your body toward it, rinse and repeat as often as you want to such an extent that you can — and often will — stay in a constant motion.

If that sounds too chaotic, it somehow isn’t. I swear.

What makes Boomerang X so fun is that the enemies — creepy crawlers, sludge-vomiting frogs, flying saucers, and other obsidian beasts — aren’t total jerks. A couple annoy me.

Combat boils down to smashing (most) enemies’ red gem-like weak point (usually just one, but sometimes a few) with a well-aimed toss to kill them. The trick is, during each wave, the arena is flooded with lots of creatures and they’ll come at you from all angles, so it’s a matter of constantly repositioning yourself to get the jump on any given enemy to line up a killing blow while also not getting swarmed in your periphery. It’s well-balanced.

A little further in, the game introduces healing pads (that regenerate a “shield” hit point if you stand still on them), as well as several offensive tricks. I won’t run through the list, but they encourage you to play strategically rather than mindlessly and safely picking off one enemy at a time. If you take out two foes with one throw, you’ll get one charge of a shotgun-like “scattershot” ability; take out three different creeps with that special attack, and you’ll get a piercing “needle” beam. I’m always trying to find a balance between quick, easy kills that are right in front of me — before I lose track of them — versus holding off until the exact right moment where I can be as efficient with my strikes as possible. 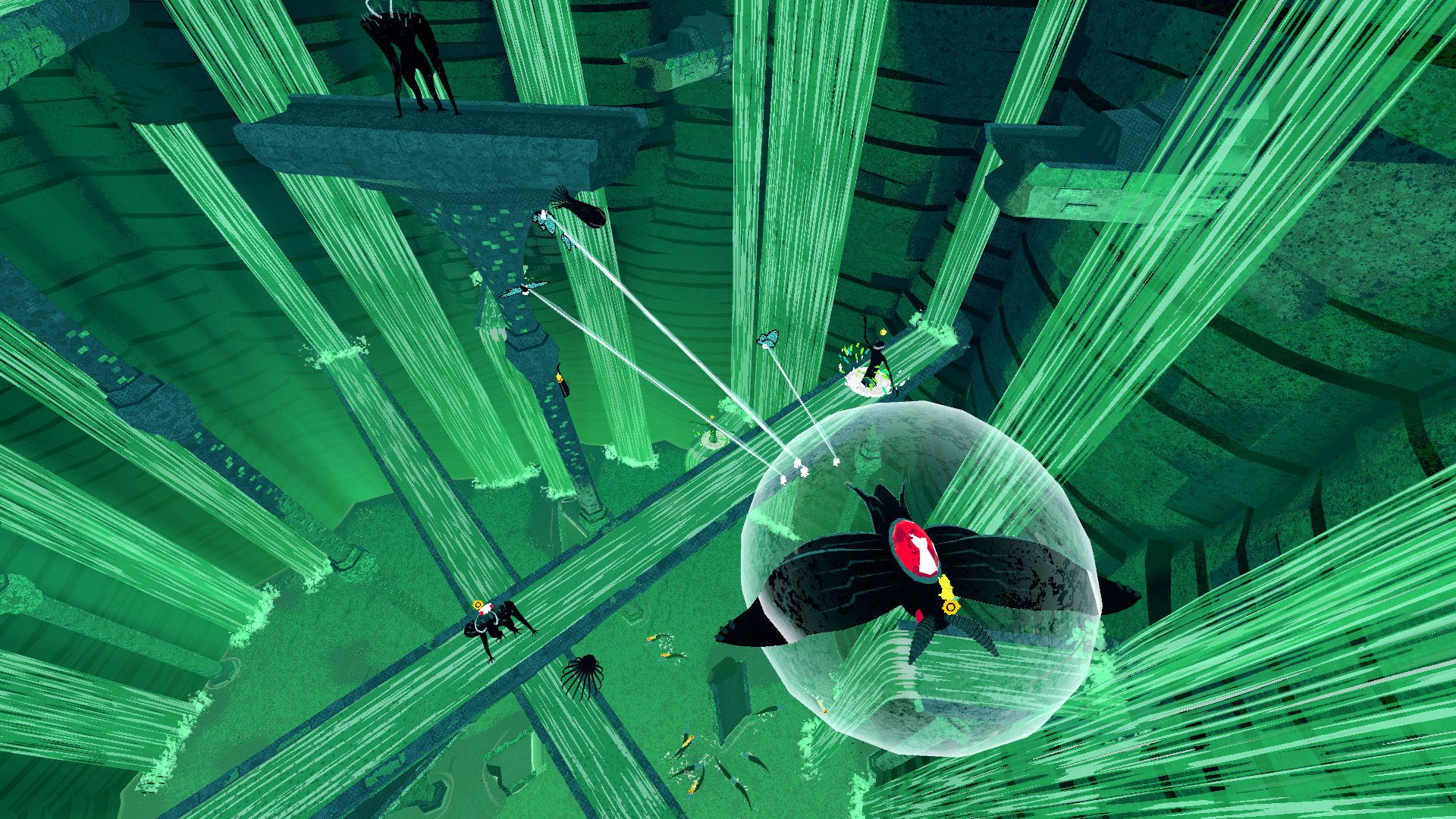 Again, a successfully ripped-and-torn arena can be over in under three minutes once you’ve mastered it, so the pacing here is quick. If you’re thinking Boomerang X might be too demanding, I’ve got to mention the time-slowing “flux” ability — it can optionally be made to slow the action to a near-stationary crawl for as long as you want (rather than three seconds of slow-mo per usage), or you can even have it fully pause everything, which fully suspends your character in place rather than simply slowing their momentum.

There are other gameplay accessibility options worth talking up, too: difficulty presets that are balanced for a mouse or controller (both are very playable but mouse+keyboard is preferred), a No Gravity mode, a High Contrast mode, “extra visible” enemies, and your choice of color for shields, required enemies, and weak points. The game is customizable in a great way, which makes it easier to recommend to a wide audience without caveats.

Also, there’s New Game+, but I haven’t been able to get very far. Even if I have every tool in my toolkit from the start, it’s one hit and you’re out, and the new enemy placements aren’t messing around, either. That said, you can freely hop back into old areas with a chapter select (perfect for speedrun practice), and there are multiple save slots. 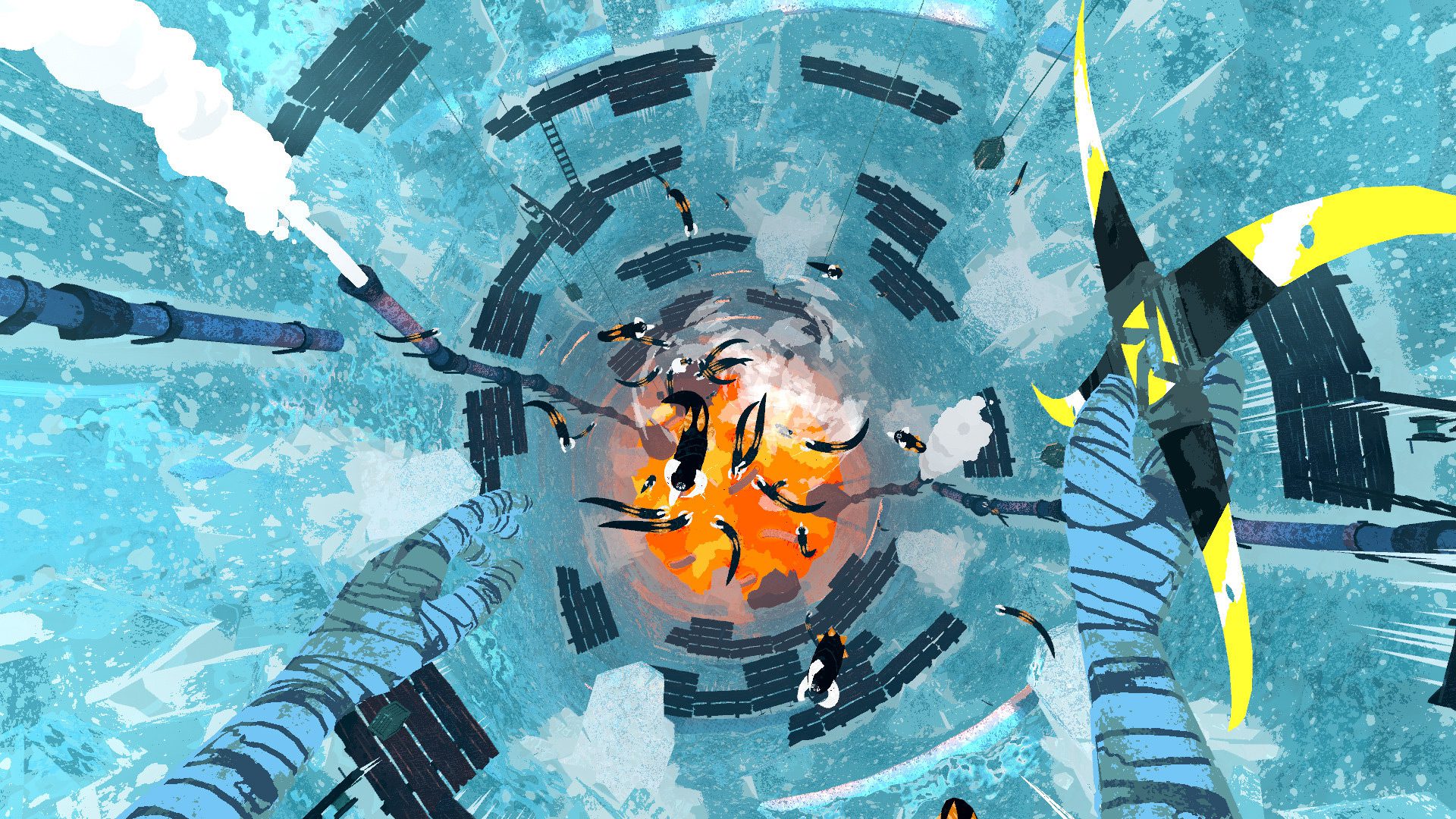 The combat could get dull if it was a basic survive-as-long-as-possible or kill-’em-all format, but to succeed in each wave, you only need to take out a handful of specially marked enemies, and then you’re onto the next, so speed is key. If you run out of HP, the arena restarts. If you survive the whole gauntlet, you’ll leap across a cool-looking (if admittedly very linear) world, take in the ruined sights, maybe chat up a pleasant centipede chap, and reach the next makeshift coliseum. It’s mostly visual storytelling.

All told, there are a dozen arenas, one of which is a boss fight, and I appreciated the way they’re stitched together and the visual and gameplay variety between them.

Above all, I like the way that Boomerang X sprinkles in combat abilities and just-fussy-enough enemy types. It’s all layered on without needlessly complicating the whole thing. This game starts fun, and it ends fun. There’s no time for your mind to wander, or get twisted up trying to remember the controls, or feel too stressed out. It’s a great flow.

I’m not sure what kind of potentially neat stuff might’ve been left on the cutting room floor to get the game in such a mean, lean state, but I respect that self-control.