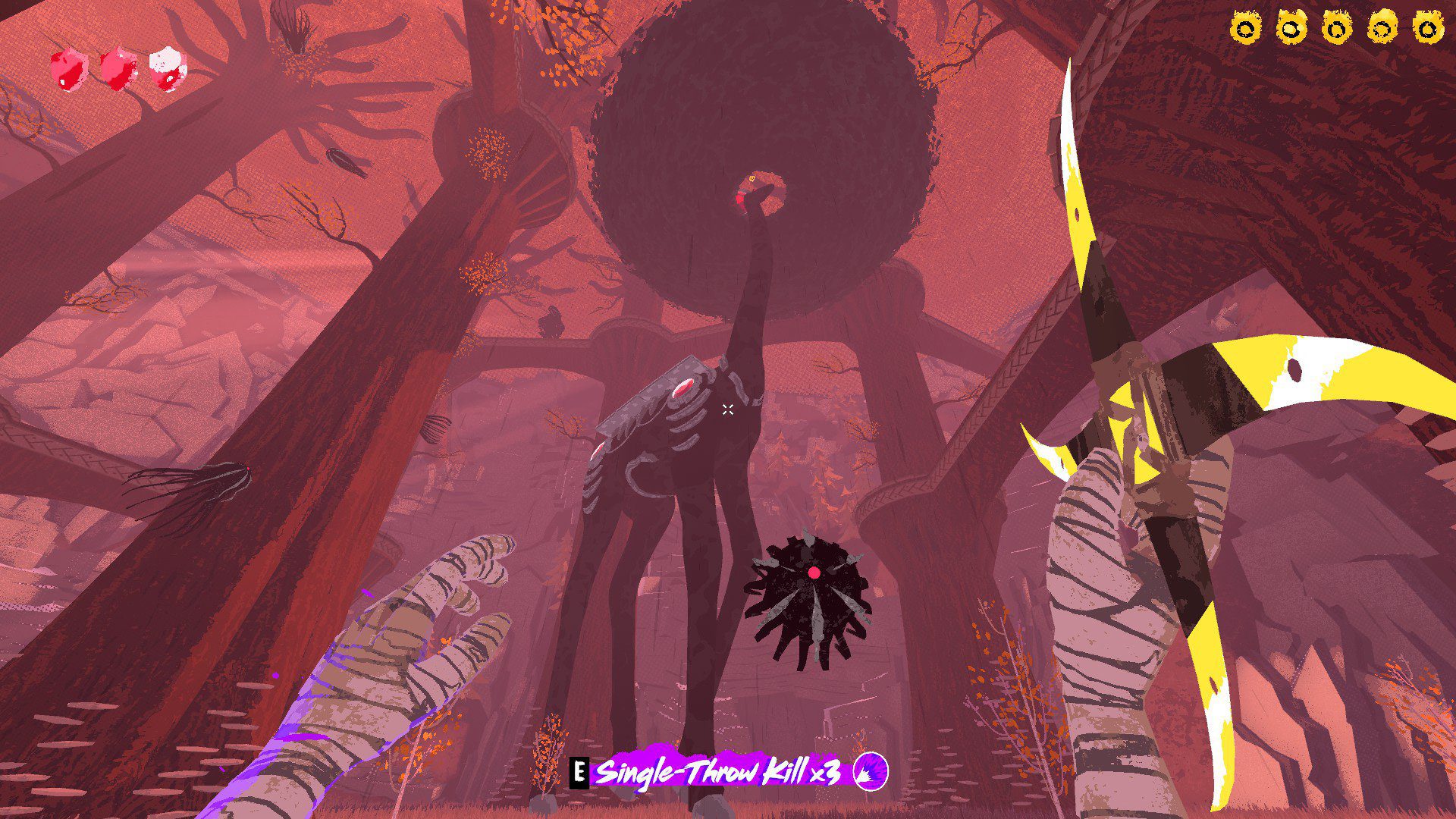 I’m not sure how I missed Boomerang X seeing as how 1) it’s a Devolver Digital joint and that still counts for a lot, and 2) it’s a stylish aerial-focused arena shooter, but man — it’s so cool. I jumped into a very generous preview build recently and couldn’t put the game down until I’d done, well, everything!

It took a bit for me to latch onto the mechanics given that they’re doled out piece by piece and things start out really simple, but I was immediately into the idea of playing as a bandaged-up protagonist who, in my headcannon at least, must look like Mac the Knife, the mummy from Captain Commando.

Washed ashore on a mysterious abandoned island, you’ll leap (and I mean leap) around until you quickly find an all-important weapon — your one and only for this reflex-intensive platforming shooter. It’s a mystical boomerang that can one-shot shadowy figures and automatically come back to you. In the right hands, with your targets’ weak points lined up just so, it’s devastating. But you can never sit still.

Once Boomerang X comes into its own, you’ll be able to dash toward your boomerang, and at that point, you never need to touch the ground again. It takes a while to get the hang of it, but it’s so, so satisfying.

All of the shadowy figures with yellow circles above them need to be killed in order to reach the next wave.

For most of my preview, I played on mouse and keyboard, and that’s ideal — that is Boomerang X at its fastest and most satisfying, assuming you’re more or less comfortable with arena shooters. That said, and before I really even dive into the core gameplay, it’s worth noting that there’s controller support, and it’s well-thought-out. I played the PC version, but this is also coming to Nintendo Switch.

Whichever control method you go with, there’s a range of choices to make an otherwise hardcore and jump-heavy shooter more reasonable, whether it’s lock-on or slow-mo or accessibility options. There’s even invincibility. The dev, DANG!, is clearly trying to reach as many people as possible, which is commendable. For the best of the best, there are speedrun options. I can’t wait to see those runs.

Most of your time in Boomerang X will be spent in wave-based survival challenges where you need to kill particular targets and try not to lose all of your shields, which are limited but can be recharged if you stand still on a health pad for a few dangerous seconds. Every enemy has a particular set of behaviors, and assessing these threats — figuring out who goes where on your “kill list” — is a big part of the fun.

In the beginning, with spiders charging you and bugs flying around, the challenge is straightforward. Later on, you’ll face foes with jewel-like weak points that can’t be defeated any other way. One of them, a Horizon Zero Dawn stand-in, summons lightning. A frog vomits toxic waste and needs to be hit on its back and underside. Moth-like menaces can shield an enemy altogether. And then there are annoying warpers who flee when you get close and create toxic bubbles that are better avoided than popped.

I could go on, but you get the gist — Boomerang X is an escalating challenge as more foes and abilities (including a limited-use shotgun blast and sniper shot) are thrown into the mix. As someone who’s really just okay at these sorts of FPS games, I have to say, I found it to be fun, and never frustrating.

I think it mostly boils down to only needing to kill some, but not all, of the foes during each wave. That setup has big implications on the choices you’ll make every second and the ownership you’ll feel when you narrowly dodge and kite groups of foes from all directions to line up a shot on the more mini-boss-tier enemies. If the game was permanently stuck on the ground, I’m not sure how long that excitement would last. It would feel same-y. As is, though, building up momentum with each warp-jump to stay in the air forever is trivial — so Boomerang X is really an aerial arena shooter with no wasted space.

Combat really opens up once you unlock Scattershot, a shotgun-like blast of particles, and Needle, a piercing beam, both of which rely on your main attack rather than running on cooldowns. To gain a charge of Scattershot, you have to kill two foes with one lined-up boomerang throw, and to fire off Needle, you have to kill three enemies with Scattershot. This creates situations where you end up keeping a lot of grouped-up fodder alive even though that can put a lot of extra stress on you and force you to constantly warp around to avoid damage. The more specialized enemies (like a relentless laser-firing eye that needs to be hit and then hit again on its back before it can recover) are often much easier to take out with these abilities, so they feel crucial. Boomerang X throws a ton at you, and it’s satisfying to react on the fly. When you make it to an arena’s final wave with no shields left, the heat is on.

I should also mention that outside of combat, there’s light (albeit very linear) world-building exploration so you can catch your breath for a moment. I can tell that there’s a larger purpose to this world, and even if it’s cryptic, I appreciate that effort. I had to stop and admire the scenery in between bouts.

Red circles can regenerate a shield — but in such a fast-moving game, standing still can be a death sentence.

As frantic as the action gets, I always felt like I was in control. Whenever I won, it felt earned. Whenever I lost — or even just when I made mistakes — I felt like that could’ve been avoided; like I could’ve done better. The balance was there, at least for me. I’m sure some people will blaze through and others will hit a brick wall. That’s the beauty of having a slew of options to help you find the perfect pushback.

If any of this sounds like it’ll resonate with you, it will — I’m confident. I came in with zero expectations (I hadn’t even heard of this game before trying it!), and now I’m mentally running through strategies in my head for the next time I pick it back up. Boomerang X is another smart selection from Devolver.

I’d encourage you all to play the demo on Steam while it’s up. You’ve gotta feel this game.