In the wake of the immensely successful Super Mario Maker, fans and wannabe game developers itching to explore their creative tendencies further turned their attention to another Nintendo property: The Legend of Zelda. Rumors of an official Zelda Maker have swirled online for years, its existence the product of mere speculation and hopeful thinking. While Nintendo may or may not be at work at a Zelda version of its Mario Maker formula, other developers have stepped up to the plate.

Block Quest Maker, originally released on mobile and Steam, has the look of an indie Zelda Maker. It features voxel art direction reminiscent of 3D Dot Game Heroes and an intuitive creator toolset, but some of the designs in the final product constrain its potential. 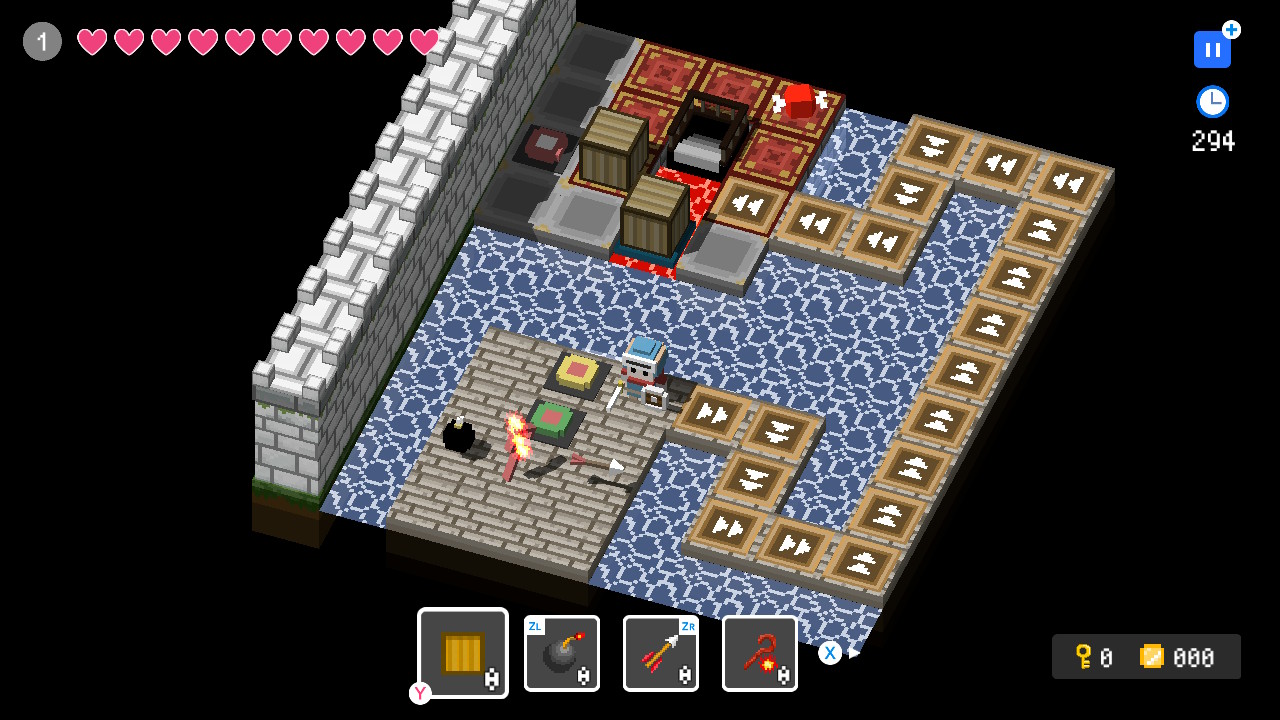 Block Quest Maker is derived from the mobile game Block Quest, a quaint title that rode the coattails of the Crossy Road phenomenon. In that game, players were tasked with solving puzzle-heavy, RPG mini-dungeons before time expired. Maker drops some of the more stringent design choices, like a protagonist who constantly bleeds health, and gives the players the ability to create their own action-RPG dungeons they can share with friends and post online for other BQM owners to enjoy.

When playing through levels, either those included in the base game or ones you download, the controls are simple for most anyone to follow. Your character moves one square at a time, you attack with the A button, block with B, and use whatever weapons you pick up along the way to make it the end of the level. Depending on the design, you may be tasked with overcoming a great number of monsters, difficult puzzles, or a combination of the two. Each level is only a single floor and players have the ability to scope out the stage in its entirety, as well as change the camera perspective to one of three options.

Included with the Switch version of the game are challenge courses to test your skills as well as training courses to give you ideas on how to use the level design toolset. There is a great deal of variety to be had with the Block Quest Maker software and these stages do an excellent job showing players how they can use it effectively, especially when it comes to puzzle design. Bombs, candles, blocks, destructible walls, switches and more make up the available tools players can use to create their own mini-quests.

The level design portion of the game doesn’t feature a tutorial but it doesn’t right need one. After selecting a stage size, from as small as five squares by five squares to as large as 32×32, you can get right to setting up your level layout using the tools you’ve unlocked so far. Floor pieces, walls, shrubbery, and water are considered map pieces while doors, enemies, switches, the hero character and the stage exit are considered event pieces. Event pieces allow players to bind elements for greater interactivity. For instance, if I want to have a door open after all the slimes I’ve placed in an area are killed, I just need to bind those slimes to that door. It takes a second or two to pick up but after I figured out how to bind elements, I immediately started looking for ways to push the software. Hidden enemies, secret doors, and option boss battles are all possible with the tools, and the more I built the more my mind raced.

My first level, The Legend of Smellda, is a simple, combat-oriented stage. Using only the tools available to me right out the gate, I was able to craft it in about 45 minutes, beat it, and upload it online. Within an hour, two people had already played it. Within half a day, that number jumped to double digits.

Now, that level is ideal for beginners because I didn’t really do anything to try and screw over the player. But that is quite easy to do that with how Block Quest Maker is set up. Many of the player-created levels I tested were heavy on the puzzles, specifically puzzles that give you just one shot to get it right otherwise you have to retry from the beginning. This is achieved through either limited resources, such as giving me just two arrows for two switches I need to hit but also trying to trick me with dummy switches that do nothing, or through innocuous level elements that only hurt player progression when activated. For instance, in one level, stepping on a certain switch closes a door I need to pass through to make it to the exit with no way to reopen it. This type of tomfoolery wouldn’t bother me so much if not for the in-game economy. 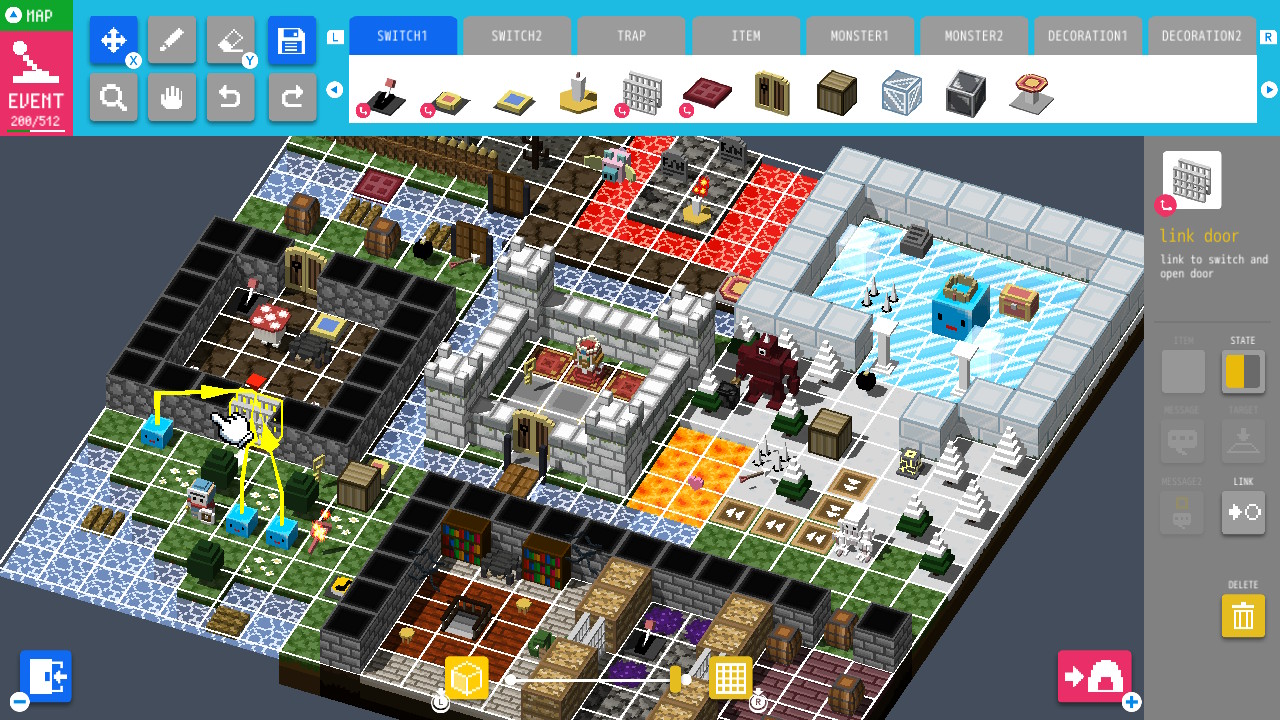 Block Quest Maker originated as a mobile title and certain elements absolutely scream, “This is a free-to-play game on phones.” The economy is one such element. The set-up for BQM is that I am a new member of a builders guild, where I can either act solely as a builder, a diver (what you’re called when you play levels), or a combination of the two. When I build a level, I have to pay the guild a fee to upload it online. When I play another player’s level, I have to pay a fee to access it. When somebody plays one of my levels, they pay me a few coins unless I set the entry fee to free. Because I’m part this guild, they take a cut of my profits. How much money I receive depends on how well the player does in my level. As stated in one of the tutorial screens, setting an entry fee of 10 gold coins will net me five coins if the player beats my level, or seven gold coins if they fail.

That is such an ass-backward way of approaching and inspiring players to build quality levels. There shouldn’t be a greater impetus for designing irritating, one-try puzzle levels. The community should be encouraged to create more dynamic, more engrossing experiences. Now, there is a ranking and recommendation system in place for levels posted online, but it’s not a great idea to push players to make nigh-unbeatable stages with the promise of more gold coins. 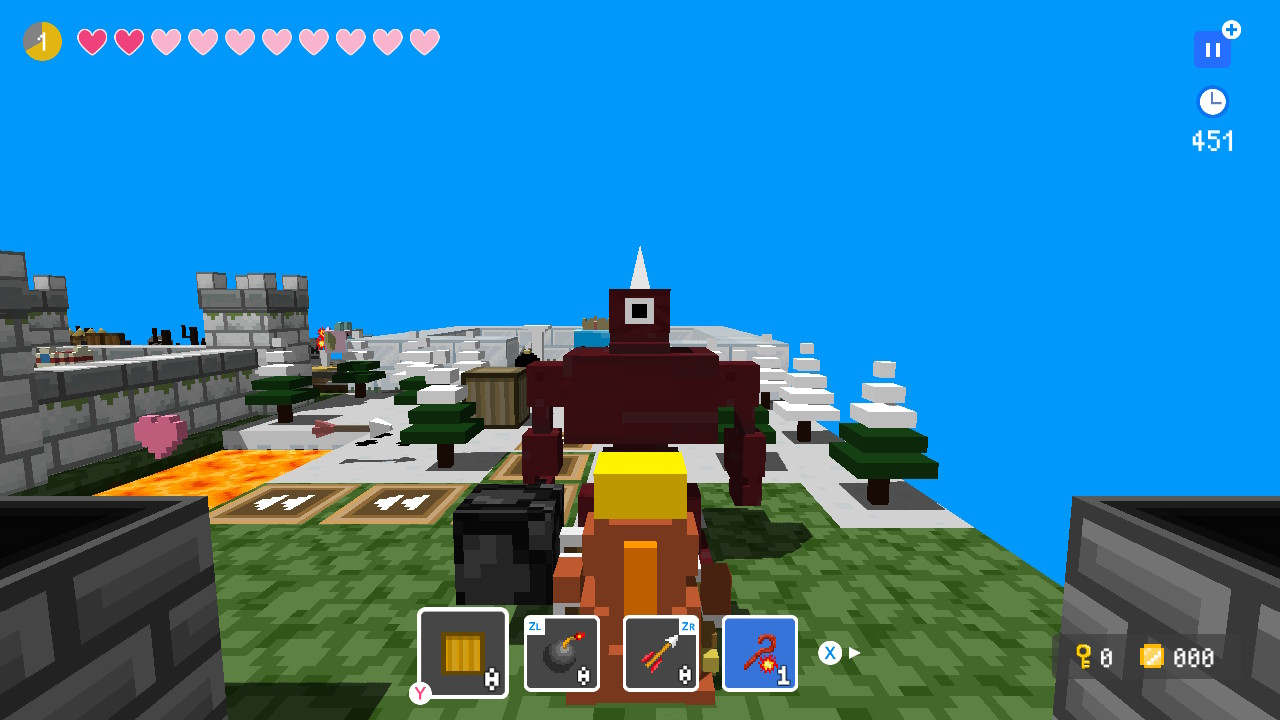 Money earned from beating levels, mining, a fee collecting, and meeting certain goals is used to unlock new elements as well as new skins for the hero character. Stage elements are reasonably priced with difficult boss characters costing a few thousand coins and smaller enemies and other event pieces only costing a few hundred. The game is especially generous with its NPCs. For just 200 coins, you get access to them all. Oh, and I should mention, building levels in handheld mode uses either touch or Joy-Con controls, and the touch controls work stupendously. Using the analog sticks? Eh, I hope you like inverted controls.

Ultimately, the success of Block Quest Maker lies in its community. With the game only readily available on Switch in Japan during my review period, I was greatly limited in the number of levels to choose from. Many of those that were playable were simple, forgettable affairs, which is a nice way of saying not worth the time it took me to complete them. But some creators out there took the tools to heart, crafting complete mini-RPGs with a story, dialogue, secrets, boss battles, and a princess to save. These are the creators who will make Block Quest Maker worth playing, and developer Wonderland Kazakiri did an outstanding job of giving them everything they need to make some memorable, chibi-size adventures.