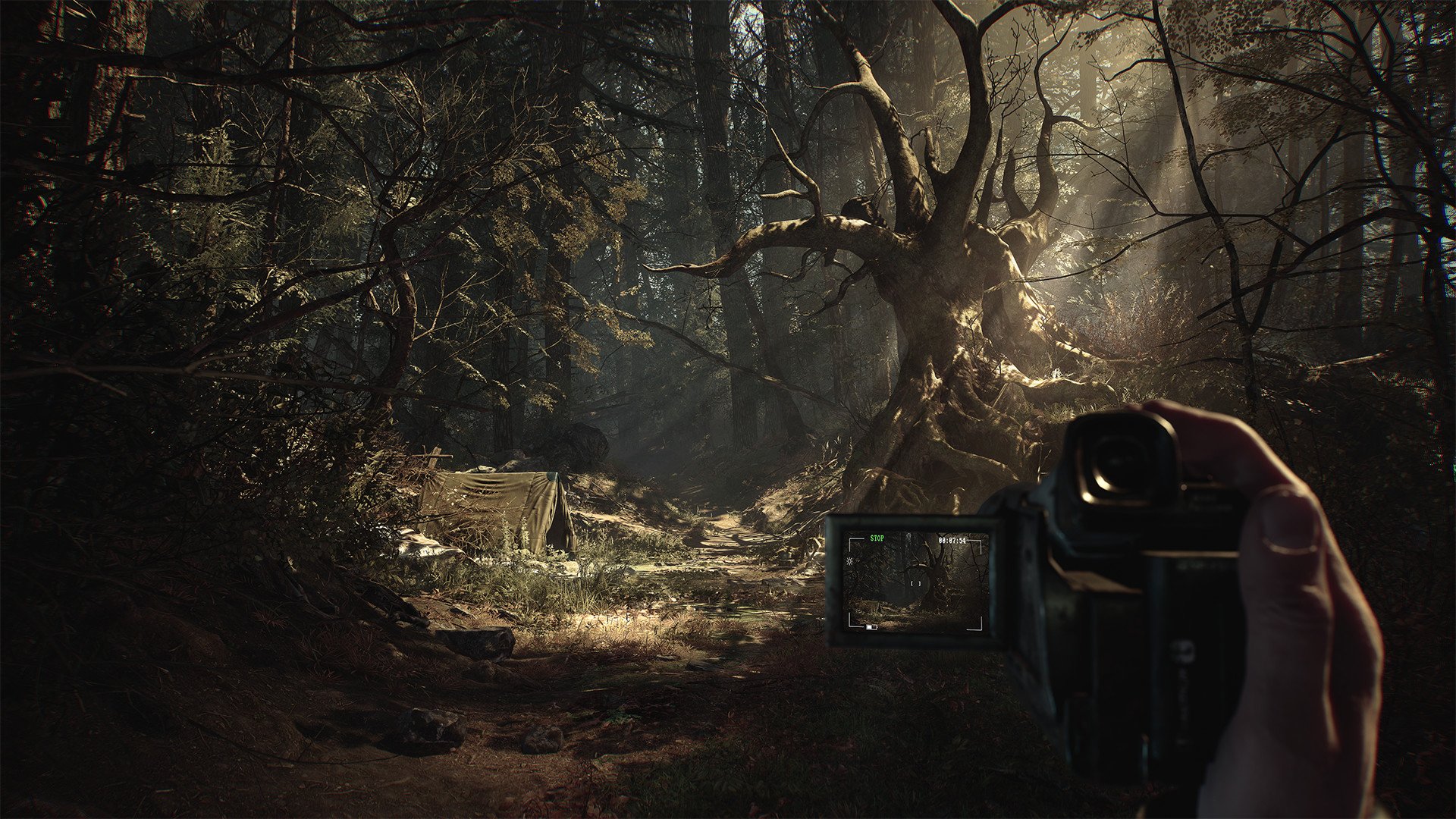 No shots of nostrils here

I have a special place in my heart for the Blair Witch films. Well, the first two at least. I completely forgot there was a third from 2016 and I’ve never seen it. But after completing the Blair Witch game, I’ve done a lot of thinking about what this series really is.

The first film was such a masterpiece of marketing and a tremendous lesson on how to make basically no budget work for you. The second, destroyed by producers, became a lesson in what not to do with a sequel. The video game does a lot of things right but it falls a bit short of what I think the series does best: messing with the audience’s perception of reality.

So what makes something worthy of the Blair Witch franchise? Obviously, we need some woods. Blair Witch has plenty of that — the entire game takes place in some dark and gloomy woods. The main character, Ellis, along with the help of his dog Bullet, is helping the town search for a lost boy within the Black Hills Forest from the movies. And guess what? Things get spooky!

The gameplay is rather straightforward (I’d hesitate to call it a walking simulator but I can see others doing so), and as such, a lot of the enjoyment rests on the plot and environment. Luckily, it’s easy to get lost in the story and be wrapped up in the main character’s plight. Much of the characterization happens through phone calls with a former relationship partner and flashbacks. Things are revealed at a solid pace, and there is not a long stretch of time without being given the next reveal, either about Ellis himself or the plot to find the boy.

That is, assuming the puzzles go smoothly. Personally, I found most of them braindead easy, but for pacing reasons, that’s probably okay. Plus, the player’s dog is a built-in help system that works rather brilliantly. The puzzles are, generally, finding pieces of things around the map and then using those things to make something happen. Sometimes there are literally instruction manuals to help. But even beyond that, the player’s dog Bullet can be told to “seek” any nearby items of interest. He’ll simply sniff around, find an item, then bark towards it until the player picks it up. Convenient!

I know what you’re thinking. There’s a dog. In a horror game. I get it, we all have that thought. Obviously I won’t spoil anything, but I will say that the implementation of the dog and the plot involved is handled incredibly well and Blair Witch deserves incredible kudos for basically everything involving the dog.

Throughout the journey, sometimes monsters show up! These are rather mundane encounters in which the player stands in a spot, Bullet growls in a direction, the flashlight is shone in that direction, the monster squiggles, and it runs to a new spot. Rinse and repeat until it’s gone. It’s usually super obvious when these will happen, too. They are incredibly boring encounters and while I understand something more about them now than I did then, I still feel as if something better could have been in their place.

There is an incredibly fitting mechanic revolving around the handheld camcorder that Ellis carries, though. Players will find plenty of tapes on their journey of some bad dude doing bad things, usually. However, playing these tapes can affect things in the real world. So if, in the tapes, a door collapses shut, that door will do the same thing in real life. Rewinding the tape will then open the door. Neat, huh? So while the puzzles themselves are usually very straightforward, I did have a couple of “a-ha!” moments when remembering the tape mechanics. It’s a very clever addition to the game that perfectly fits the idea of what a Blair Witch game should be.

The game culminates in a final scene that, while incredible, goes on a bit too long. When it began, I was filled to the brim with excitement and fear. Again, no spoilers here, but there is a moment just as the scene begins that is so perfectly done. In fact, there are a couple of set pieces throughout the game that are simply brilliant. Like, jaw-droppingly good. But as that final scene kept…on…going, I started to tire of what it was doing. I feel as if the same message could have been delivered while removing about a third of the time. There are multiple endings, and it seems I got the “bad” one, but it’s one of those things where there is basically no way to get the good ending the first time.

I think that, besides the woods and spook factor, the “meta” aspect is an important one to the franchise. The first movie had people legitimately concerned for the three actor’s location and well being. The posters placed around towns before the movie released was a stroke of genius. Even the second movie had the Mystery of Esrever and filled the movie with small clues and details that only the astute would notice and know what to do with. I consider this a crucial element to what Blair Witch should be.

I looked up a lot about this game after the fact. The game does have some meta stuff involved, but just about all of it is in the third act. The first two acts can sort of drag, and then everything ramps up to “super interesting” in the final third of the story. I wish that stuff was spread out a little more or even expanded upon. After seeing all of the things that Blair Witch keeps track of for its different endings, I feel like I should really play through it again — but I think the beginning drags too much for me to take the plunge anytime soon. I finished the game in under six hours, but there aren’t enough changes, based on what I’ve seen, to really push me back in to experience the things I missed.

In my research I also came across many complaints about crashes and black screens on PC. I did have the game crash on me once (and I lost a decent amount of progress, which is extra terrible in a horror game), but I had no other bugs. In fact, I did try and break the game via map geometry a whole lot and the designers did a great job of stopping me.

If you came here wondering what type of scary Blair Witch is, then this is the paragraph for you. I am a huge scaredy-cat when it comes to horror games, and I feel as if Blair Witch sufficiently blends regular scares with psychological horror. One of the main themes is how someone’s past can haunt them (no specifics here so readers can experience it themselves) and the game does an excellent job representing that and making the player feel existential dread, even without those same experiences.

But there are plenty of jump-scares, especially towards the end. As much as I enjoyed the third act, it’s also where the most jump-scares occurred, many of which felt cheap. But, given the slow-burn horror that permeates most of the game, it didn’t end up becoming too annoying or overwhelming. Just a little out of place as the increase in jump-scares is absolutely noticeable late in the game.

So, is the Blair Witch game a good fit for a franchise many have mostly written off by now? As a fan of said series, I would say yes. It absolutely has its faults, with the poorly paced gameplay and story elements being the worst offenders, but the amazing set pieces and psychological horror do a great job of raising the heart rate of anyone willing to venture through the forest. Ultimately, there are a lot of interesting ideas here, but they simply don’t come together like they needed to in order to make the best of them.