When I first heard that Blacklight: Tango Down was getting a sequel, I was stunned. While the original game looked pretty, this particular reviewer found it incredibly tiresome and miserable to play. I was reluctant to tackle its free-to-play successor, but decided to give it a try anyway.

Some things deserve a second chance, and it seems Blacklight: Retribution definitely earned one of its own. 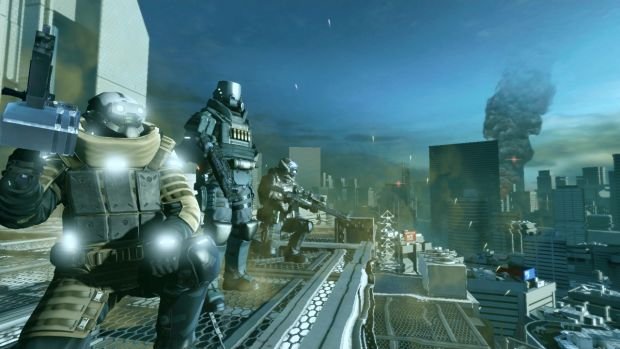 It’s hard to believe that Blacklight: Retribution comes from the same team that developed Tango Down, such are the differences in terms of quality, ambition, and variety. Structured entirely as a competitive multiplayer game (smartly eschewing any cooperative nonsense), Zombie Studios has centered Retribution around a familiar free-to-play model. There’s no entry charge, but if you want the bells and whistles (the many bells and whistles), you’ll be reaching for your wallet.

Whether you pay or not, this is a shooter worth trying out, especially since it initially costs nothing but your time. While Retribution does nothing revolutionary, it does everything incredibly well. Its game modes, combat mechanics, and leveling system will feel instantly familiar to players of almost any current-generation shooter, but rarely have all these well-worn elements come together in such a sleek package.

Matchmaking is incredibly fast, with players able to jump into quick matches within seconds. The matches themselves run smoothly without lag, despite how many losing players will whine about it in the chat. There’s a surprising amount of polish, with only a few minor glitches encountered during the entire experience. The combat is incredibly solid, packing a sizable variety of weapons, all of which carry a satisfying level of heft and impact. Zombie Studios has cherry-picked the very best elements of the very best modern shooters and done each of them justice.

There’s a modest number of maps, but each one is very well designed, which is a huge step forward from Tango Down‘s horrendous collection of predictable, uninspired, glorified crawlspaces. There’s also a selection of traditional gametypes — Deathmatch, King of the Hill, Capture the Flag and Domination, and each mode squeezes the most out of the intelligently structured environments. Spawn points could do with a little improvement, as the smaller maps have a tendency to throw one right into the middle of a firefight, or place one team nearer to the objective than another. These problems aren’t encountered commonly enough to be too much of an issue, but they’ll certainly crop up from time to time.

As players score kills and complete objectives, they’ll earn CP. CP is a form of currency that can be used at depots positioned along the map, allowing players to buy themselves temporary bonuses. Some of these bonuses are functional and simple, such as quick health or ammunition refills, but most players will be using them to access rocket launchers, automatic turrets, and miniguns. It’s a fun system that adds a dynamic level of reward, though it can be incredibly annoying to buy a hot weapon and get killed, instantly losing it. It can happen quite a bit.

Most importantly, depots house the Hard Suit, which is the star of the show, as well as the number one item guaranteed to make the other team groan in displeasure. 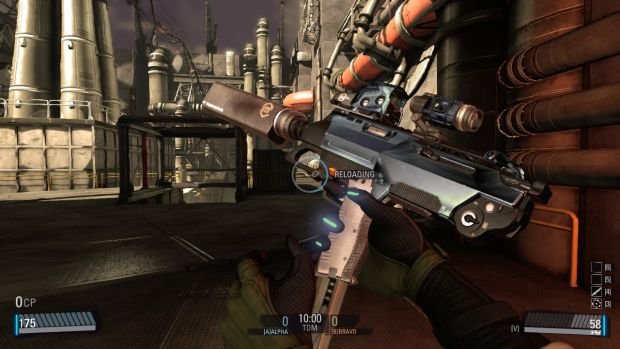 Once bought from a depot, players must summon their Hard Suit on a clear patch of open ground with no roof coverage. If successful (the game can be incredibly picky about where it’ll place a suit), this gigantic mech can be clambered into to provide the team with a slow-moving, heavily armored, walking box of death. Armed with both a minigun and a railgun, the Hard Suit is terrifying to encounter and empowering to pilot. Interestingly, however, it’s not too hard to unlock, with any moderately skilled player able to garner the required CP. It’s not unusual to see up to three Hard Suits on a team at any given time, although they’re not always useful thanks to their bulk and sluggish speed.

The Hard Suit is sure to be a controversial addition, owing to how powerful it is, though I found it doesn’t break the game at all. My only criticism is that the armor is perhaps a little too excessive, since they can take forever to put down. Even with stinger missiles specifically designed to neutralize the machines, players will have a tough time taking one down, and I feel their durability may need to be nixed a tiny bit. That said, wiser players will likely abandon Hard Suits as time goes by, since they tend to get stuck in confined spaces, can be easily outrun, and aren’t as flexible as some of the more tantalizing depot choices. Useful as they are, they’re not the answer to anybody’s prayers, making them a bit less “cheap” than one might initially fear. 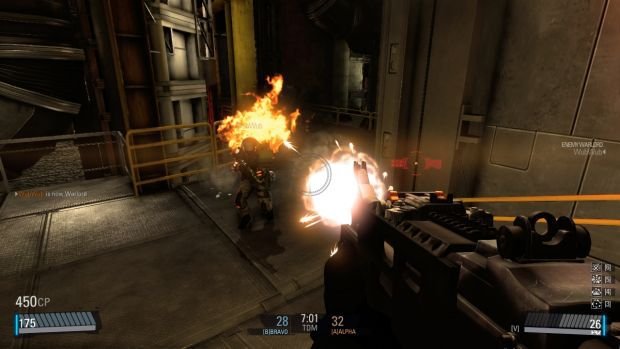 Players can customize their own depot options as they progress, unlocking new types of guns, turrets, and other exotic items. It’s not just the depot output that can be tailored, either. Personalization is, as one would expect, a huge part of the experience, with an almost overwhelming amount of options. From emblems to camo colors to a whole host of weapon parts, there’s a massive amount of things to tweak and customize. Players will be able to build their own guns from scratch, and even pick up special (and sometimes hilarious) emotes that they can show off on victory screens. Of course, most of these options are going to ask for your cash, and quite a lot of cash will need to be spent if you want the best gear.

There are two ways to buy equipment in Retribution — GP and Zen. GP is earned after each battle, essentially serving as your “free” money. Zen, meanwhile, is purchased with real-world cash. While many items can be bought with GP, the costs are significantly greater than if they’re to be purchased with Zen, creating the classic balance between paying for an early edge or grinding for a very long time. As well as paying outright to keep one’s stuff, Retribution also sells items on a “rental” basis, with options for one-day, seven-day, or permanent purchases. The rental system is a good way of trying out equipment before buying them, while some regular players may even be able to earn enough daily GP to rent their favorite things indefinitely. 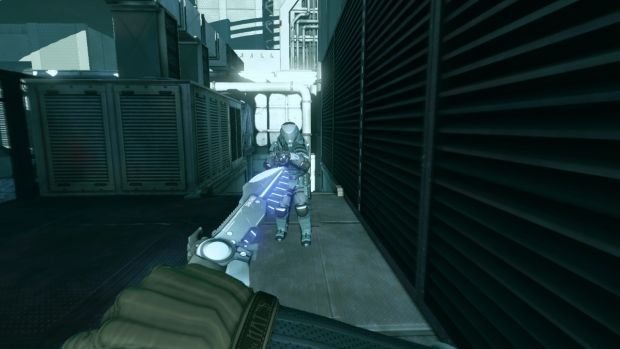 Things get less savory when it comes to permanent buys, however. Prices for outright purchases are pretty damn expensive, with a single gun costing anywhere up to $15 to obtain and tweak. The initial list prices look relatively cheap, but you only ever see the single-day prices when browsing. Much of the content can be bought eventually using GP, but the key word is “eventually.” The numbers are pretty obscene when it comes to bagging the high level goods.

Fortunately, however, it’s not quite as bad as it would appear, due to the fact that the game is plenty fun without the extras. I had sunk hours and hours into the game, having a great time, without having to spend a single thin dime. Once I got some of the premium gear to try out, I found that they gave me a bit of an edge to keep things spicy, but not once did I feel overpowered. After trying some higher level games with players who had already spent a lot of time and money on the game, I was still able to hold my own, albeit with a bit more of a challenge. While only time can tell, I feel safe in saying that, at the moment, I see no insurmountable pay-wall that would lock players out of the party. Even if there is, after not seeing one for a number of days, I’d say there’s more than enough enjoyable gameplay for anybody wanting to just dip in.

While the game is highly polished, there are a few niggling problems holding it back, mostly to do with certain weapons. For instance, the minigun has a tendency to not work when the fire button is pressed, while the heal gun is absolutely useless due to its finicky aiming. It’s also a shame that certain support items can’t be equipped together — for instance, I’d love to have revival syringes and heal guns to create a medic, but you can only ever have one or the other. Some of the guns, too, feel oddly imbalanced. The SMG is Godly at all ranges, while the LMG (my usual go-to gun) feels oddly powerless and far too imprecise to be of any use. That said, with so many options to choose from, nobody should have any trouble finding a set of guns, depot drops, and utilities that serve their needs. 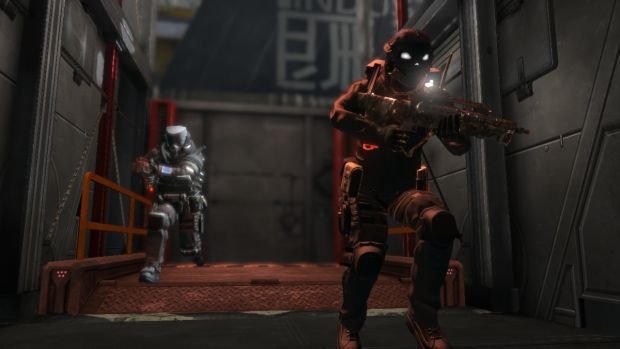 What really puts Blacklight: Retribution over the top is its sense of raw style. Feedback is a big part of the game, with players regularly informed on who the highest threats are, and whether or not they’ve become the team’s “warlord” by scoring the most points. If you’re killed, the camera freezes the action and zooms to your murderer with a Matrix-esque effect. The sound design is impeccable, and does a great job of letting you know where the action is, and whether or not a Hard Suit is around the corner. With emblems, tags, and emotes all lending a sense of personal flavor to proceedings, there’s always something to tweak in order to make your avatar feel all that more yours.

The visual design merrily borrows from Halo, Crysis, Deus Ex, and more to create something that looks familiar, yet strangely unique. While characters may appear to be the kind of masked mooks we’ve all seen before, the level of detail and the often eccentric takes on science fiction armor give them a level of freshness, helped by the strong blue and orange color schemes, and the camouflage options players can take advantage of. Graphically, this thing looks far better than one would expect any freemium game to look. It’s not exactly a Crytek game, but it’s definitely pretty. Environments are especially beautiful, with unique locations brimming with color. 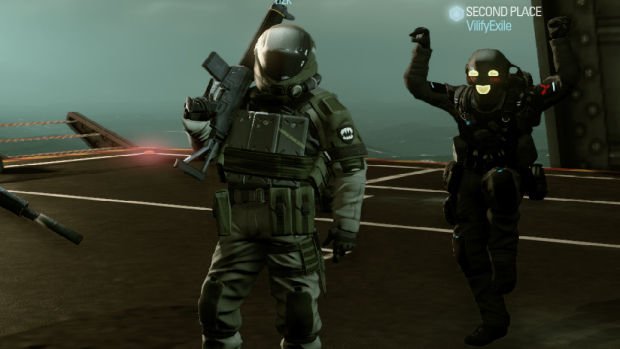 Blacklight: Retribution is so far above its predecessor that I still can’t believe the two games share a name. Every single thing has been improved, and the result is a game that’s fast-paced, supremely gratifying, and hard to put down. I think it would be in Retribution‘s best interest to lower the prices, as it would encourage more purchasing and keep players invested for longer, but the bare-bones experience is so damn good that the premium content shouldn’t be considered a barrier for entry. There’s more free fun in this game than many $60 games (and their paid “downloadable” add-ons) seem to offer these days, and those who truly get into the swing of things won’t mind paying for some upgrades in the end.

This is not only a great example of a professional and credible free-to-play game, but it’s also one of the best first-person shooters I’ve played. I am quite serious when I say that, too. This game is a serious FPS contender, and its freemium status should not diminish your expectations. I wholeheartedly recommend you jump in and give it a try. It’ll cost only your time to give it a whirl, and I am certain that it’ll be time well spent.