Combat flight simulators, like real-time strategy games, are a resilient breed which has always struggled to find its place on consoles. A mouse and keyboard control scheme is almost always preferred over a gamepad when it comes to fast-paced strategy games, and flight sims really need a flightstick if you are going to opt for a realistic feel.

Console flight sims traditionally veer into the arcade space (H.A.W.X., Ace Combat, Secret Weapons over Normandy) to try and create a fun experience for all, or try to satisfy both the arcade and simulation fanatics at the same time, usually without success. Gaijin Entertainment, on the other hand, has made some good sim-heavy console titles with an arcade feel in the past (IL-2 Sturmovik: Birds of Prey, Apache: Air Assault). With Birds of Steel, they have finally steered well into simulator territory, only offering a half-hearted attempt at appeasing the arcade crowds. 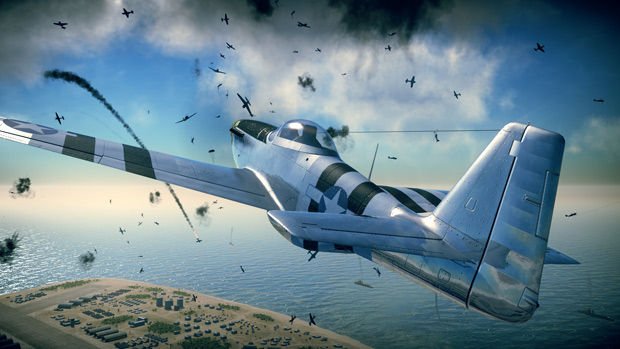 Set during World War II, Birds of Steel offers a huge array of aircraft to unlock and fly, each with their own specific feel, stats, and a high level of interior and exterior detail. That Gaijin really loves their aircraft comes as no surprise, and they truly deliver in this regard. Players who look to Birds of Steel for historical authenticity will feel rewarded to say the least. The dedication to such authenticity also impacts the controls and combat mechanics which, depending on what you are looking for in a console flight sim, may put you on either end of the fun spectrum.

Difficulty is defined by the flight controls, and comes in three variations — Simplified, Realistic, and Simulator — while options for limited fuel and ammo are also at your disposal. Realistic mode is the go-to mode Birds of Steel feels best tailored to, even if it is undeniably hard. Planes will shake under the strain of speed and winds, making it hard to aim and lead your targets, while overzealously trying to make turns without regard for aerodynamics and airspeed will see you unceremoniously stall and spiral out of control. G-forces will blacken or redden your screen, which is a nice visual touch that is long overdue on consoles.

Simulator mode cranks the physics up a notch, and removes HUD info to make it nearly impossible to tell your airspeed without looking down at your instruments in the cockpit view. On the other hand, Simplified mode is what anyone new to the genre will feel most at home with, removing stall issues and generally feeling more like your typical arcade World War II flight sim.

The flight control systems that lie beneath the hood make for an impressive feel, turning the mere act of controlling your airplane into as much of a challenge as actually completing objectives. Flying feels dangerous, as if humankind wasn’t meant to be inside a tin can with wings and guns attached to it, let alone using it to wage war in the skies over conflict zones. Try to make a dive-bomb run on Simulator, and you’ll even need to extend the air-brakes to control your speed lest the stress of aerodynamic physics turns your plane into a heap of metal, crashing to the Earth below.

The caveat of the distinction between the different control difficulties is that most players who are more casual fans of the genre will stick to the Simplified scheme, rendering most of the game a rather boring and unimpressive chore. Meanwhile, the Simulator option may offer exactly what the “hardcore” crowd is looking for, but feels made for flightstick and throttle controls rather than a gamepad. Even the slightest nudge to the side at the wrong time can lead to a complete loss of control and a seemingly inevitable drop towards death. There is always the option to switch to one of the other three planes in your wing, but crashing four times in a row when you are merely trying to make a turn is a less-than-welcome slap on the face if you are struck with a gamepad. 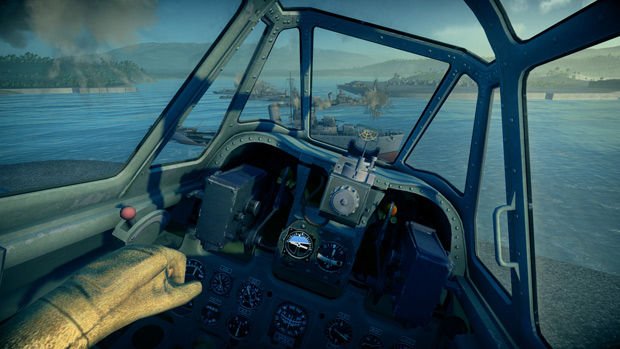 This discrepancy between realism and arcade sadly permeates most of Birds of Steel‘s offerings. Combat in most single-player missions revolves around reaching a checkpoint, watching an in-engine cutscene of planes flying to their target, followed by shooting a number of enemy planes or destroying a number of sea and land targets. Then you return to your carrier or airstrip checkpoint, and the mission is over.

Dogfights are meant to portray realism rather than arcade fun, so don’t expect to singlehandedly wipe out entire squadrons of enemy planes on your own. Shooting down any enemy plane at an angle often feels more like the result of a lucky shot than that of complete mastery over the combat mechanics. With unlimited ammo, you can drop one to three bombs before you have to wait a minute to “reload,” further reducing arcade fun if you are seeking it. Suffice it to say, arcade combat flight sim aficionados should look elsewhere when it comes down to the combat mechanics. It feels made for the harder control scheme options to maintain a fine balance between skill and challenge, and the Simplified controls just don’t offer enough of a challenge for most of the game.

On the upside, fighting your way through Birds of Steel‘s single-player components is a pretty lengthy endeavor, with a 1941-1942 Pacific campaign available for play from both the USA and Japanese viewpoints. Aside from the two campaigns, a wealth of single missions can be chosen for the Mediterranean theater, Pacific Ocean theater, and Western and Eastern European fronts. While the campaigns and missions are decent fun to play through, the mission design is disappointing. Each mission does make you feel like you are simply flying a sortie to do a single bombing run or Combat Air Patrol, but in some missions, flying back and forth almost takes more time than you’ll spend actually seeing any action.

Eventually, single-player may start to bore you as mission after mission begin to feel all too similar. However, there are multiplayer and co-op options abound in Birds of Steel, and it’s only here that everything the game has to offer starts to unveil itself. In fact, the majority of the content is hidden away from solo-only players’ eyes. 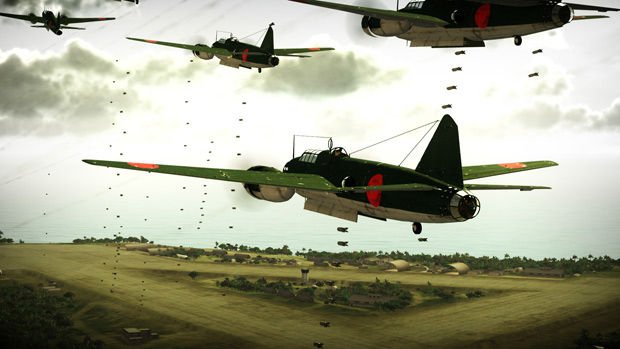 Some Single Missions can be played online, while there is always the option to pick AI wingmen in a private match, or completely play offline. A Dynamic Campaign lets you rewrite history (cooperatively if you choose) during eight battles, such as the Battle of Midway or the attack on Pearl Harbor. Success or failure in missions at each “turn” of a dynamic campaign will affect how the battle as a whole will play out in successive missions, meaning you can easily lose yourself playing a dynamic campaign for an extended session of play. A mission editor with plenty of options allows you to further extend your playtime.

Although the Missions are an appreciated bonus, competitive multiplayer might be the best aspect of Birds of Steel. As much as the realism detracts from having fun in single-player, multiplayer manages to take the best aspects of the realism Gaijin strove for and turns it into an exhilarating, enjoyable experience. Compared to shooting down AI planes on Simulator difficulty, which is already a challenge when your target reticule moves all over the place, killing a human player in multiplayer takes it to a whole other level. It’s hard enough to land even a few hits, let alone enough to take out a player, and while you may not get double-digit kills in an online match, each kill is rewarding and feels like an achievement.

Leaderboards, time-specific online events, and tournaments with certain requirements all increase the odds that the online playerbase will remain as active as it is at the time of writing; no mean feat, as the lobbies in console flight sims are often as empty as space itself, a week after a title’s launch. Experience points, which can be gained in limited amounts in single-player, are far more easily accumulated in multiplayer, and a hangar filled with dozens of fighters and bombers for different countries in the war is at your disposal to unlock with the XP you collect. 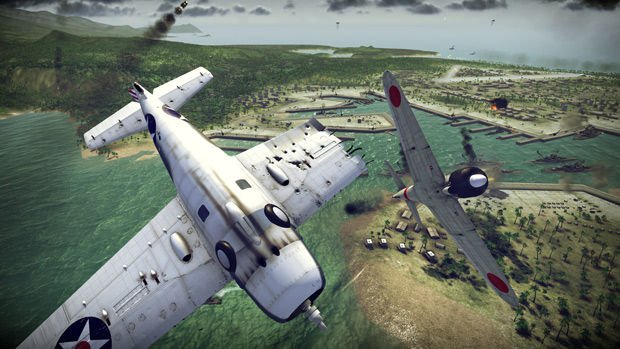 Birds of Steel‘s single-player offerings are rather dull compared to other games in the genre, including Gaijin’s own Birds of Prey, but the online components are unrivaled. If you are new to console flight sims, this isn’t going to be the best place to start. On the other hand, if you bought a flight stick for your console and have been continuously disappointed by titles in the past two years, this is exactly what you have been waiting for.

It’s a game meant for simulator fans who like to play hard and play together, and one that is only available on consoles. (Presumably because IL-2 exists on PC.) Those willing to commit to Birds of Steel will remain occupied for a long time. Don’t let the option of a more arcade-style control scheme lure you in, however, as it will leave you largely unsatisfied if you are expecting something like Ace Combat.

Birds of Steel doesn’t quite manage to marry arcade and simulator crowds in a single console title, but it does pull off being the best online combat flight simulator on consoles, bar none.