A conflicted return to Rapture

BioShock Infinite was one of the most polarizing releases in recent memory among the gaming community. While a number of critics lauded it as an apex for Irrational, many fans were left feeling underwhelmed by certain facets of the design, some of which felt like a regression for the franchise.

I really enjoyed Infinite myself, but I’m also fully willing to admit that there were a number of design flaws that detracted from the experience. Some of those issues are directly addressed in Burial at Sea, but in the process, others are created. Uh oh! 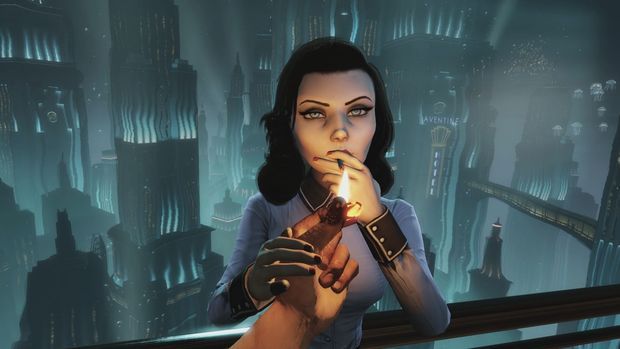 The setup is as simple as it gets — in a seemingly alternate universe, another version of Elizabeth comes to the office of Booker Dewitt asking him to find a child named Sally. After “pressing X to light cigarette,” bada bing bada boom, you’ll jump into Rapture rather quickly — as in, less than a minute or so, as it’s literally right outside your door. At first, Burial‘s rendition of the classic underwater dystopia feels like a different Rapture. This time around, it feels like an actual community, rather than a series of desecrated halls with Disney robots spouting classist social commentary.

But that feeling is fleeting, sadly. There is no “God Only Knows” moment of clarity like in Infinite. You simply get to see a brief glimpse of Rapture with regular people in it, doing regular things, augmented by predictable discussions like “What if the Big Daddies rebelled?” and other half-hearted fanservice teases. The facade quickly devolves even further after the first quest (a series of errands), and you embark upon the real bulk of the game — the messed up part of Rapture we all know so well on the eve of its collapse.

At first, you may feel excited at the prospect of returning to these hallowed halls, eager to see how all of your old favorites are doing. But you’d be extremely disappointed once you dive in, as there is very little here to placate you outside of the mere existence of Rapture in the DLC. Burial at Sea is content with namedropping characters from BioShock, but not actually providing anything substantial outside of a five-minute conversation with Sander Cohen, followed by more namedropping.

It knows its audience, and it’s very much fanservice from an environmental perspective, since much of the selling point is the mere return to Rapture. Not much happens as you’re spelunking through it, however, because you’re basically just fighting splicers (again) until you reach the poignant conclusion. Eventually, Burial lets you know that it is intertwined with the main story (you should complete Infinite first to fully understand the end of the DLC), but it isn’t until this brief moment that anything important actually happens.

What is neat about Burial is the juxtaposition of Booker knowing intimate details about Rapture while Elizabeth pretends to know nothing. There’s one part specifically where she explains her wormhole power as a “new Plasmid,” and you can almost feel the shiftiness of her eyes in her voice. I would have loved more exploration of these themes, but there’s one major problem: this Elizabeth just isn’t compelling enough. Period. Don’t be fooled by the “noir” setup in the intro — that theme is not carried into the DLC proper.

Burial‘s version of Elizabeth is less endearing, less interesting, and gives you no real reason to care about her place in the narrative. She’ll still throw you health, EVE, and ammo just like Infinite, but now more than ever she feels like a delivery system rather than her own entity. With Infinite, I was always left guessing at how Elizabeth would react to a certain situation, and I’d feel like I was in the same moment right alongside of her — sharing those experiences. But in Burial, she conversely feels predictable and soulless, adding nothing more to the plot than fundamental intrigue and a new outfit. 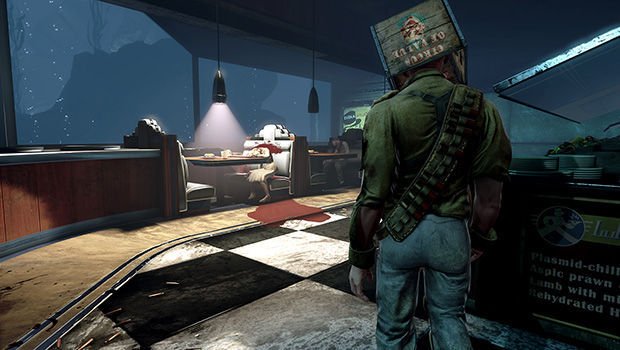 Gameplay-wise I think Burial is a step in the right direction for a potential Bioshock 4, as it feels like a slightly refined Infinite. The weapon wheel returns (thank goodness), allowing you to switch between any given tool in your arsenal at any time, rather than pointlessly limiting you to two tools. The Skyhook is also back in the exact same capacity, but this time it’s called an “Air Grabber,” as to fit into the Rapture-centric lore. A new weapon called the Radar Range is extremely fun to use, and functions like a high-powered microwave laser gun, adding a bit of silliness to the proceedings.

The design is tweaked as well in Burial, with a mostly positive outcome. In the original BioShock combat felt unique, in the sense that one Big Daddy could be the difference between life and death. But with Infinite, forced wave-based arena combat sections often made a mockery of the original’s design, seemingly doing nothing more than padding the game for the sake of it.

In that sense Burial feels like a solid compromise, because while combat isn’t quite as nuanced as the original, it definitely feels less forced than it was in Infinite, and strikes a good balance that should placate the majority of fans. Elizabeth’s tearing power can still be used to summon objects like samurais (yeah, you heard me), robot patriots, gun stashes, and medical supplies just like Infinite, which helps add another tactical layer to combat on top of those refinements. 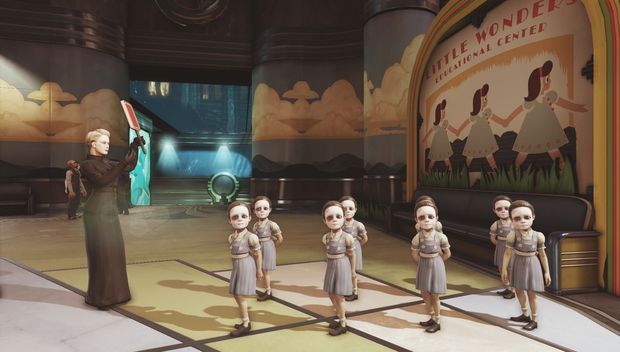 Don’t expect a whole lot of playtime without the second piece of the package, as Episode One‘s narrative will last you a solid hour or so (which isn’t a problem for me, but a fair warning), and you can tack on another hour or two (at maximum) if you want to explore everything. While I don’t want to spoil it for you, Burial leaves off on a massive cliffhanger at the very end, which is pretty much the only point where it feels relevant.

I wasn’t too impressed by Burial at Sea Episode One, mostly because it just doesn’t add a whole lot to the overall franchise outside of the last 30 seconds, and it’s simply not compelling enough. While it’s quite possible that Episode Two will tie everything together in a neat bow and blow us all away, Irrational Games has yet to make a legitimate case for a return to Rapture.