On one end of the spectrum was the third-person action retail title, Bionic Commando, which found ex-Faith No More singer Mike Patton growling profanities and tossing cars at enemy soldiers. On the other was Bionic Commando Rearmed, a digital download title that title that adhered closer to the original game’s formula. The former was met with mediocre reviews and poor sales, and the latter praised for its old-school sensibilities and slick nods to its source material.

Rearmed proved to be successful enough to warrant a sequel, one that relies less on clinging to the past, and more on opening up Bionic Commando’s basic gameplay mechanics with more “new school” gameplay design choices. Rearmed 2 also features a slew of other additions that on paper, make it sound like a superior game to the original. As it turns out, it’s a solid game, but one that’s slightly outclassed by its predecessor.

With the original Rearmed, developer GRIN did its best to update the original Bionic Commando formula just enough to not step on any toes. That meant was a complete graphical overhaul, yet one that stayed stylistically close to the original. It also meant the firm decision to make sure that the game’s protagonist Nathan Spencer would only leave the ground if his bionic arm and swinging is involved.

In the sequel, the game’s developer FatShark (made up of many former ex-GRIN staffers) takes a literal leap forward, adding a jump button to the mix. Along with a few other tweaks, this simple addition gives Rearmed 2 a more “modern” feel, with faster and looser controls. Not only can Nathan jump, but he’s not longer confused at the sight of small ledges and can now climb over small objects.

The bionic arm, of course, makes its return and is indispensable as always. Combined with the jump, small tweaks to the hook controls make it instantly more accessible than the original. Interestingly, most of the game’s levels are designed to be complete without using the jump button if you so choose. There’s no way to disable it within the game options that I could see, so this is entirely up to the player to avoid that pesky jump button. Rearmed 2 does keep track of this achievement for every level, so this is definitely a nice little nod to the purists. For everyone else, that jump button will be a welcome addition in some of the game’s trickier platforming areas. 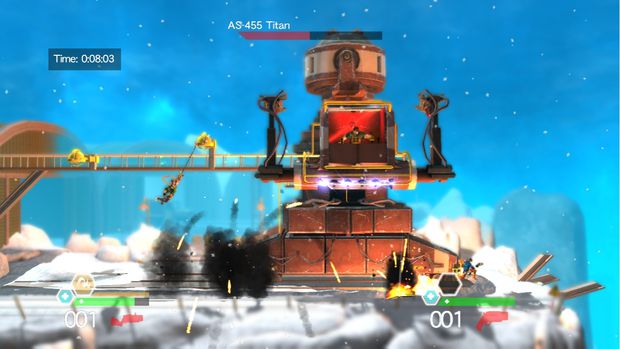 Also new for Rearmed 2 are a bunch of new weapons and upgrades, many of them passive abilities, like one that will slowly regain Nathan’s health. While these additions give the appearance of a more rounded, richer experience, that’s not entirely the case. It’s nice to have these additional weapons in your arsenal, but you’re rarely forced to use them in combat. Mostly, you’ll find that you’ll need them simply to trigger things in the environment, and many times not even on mission critical paths. The game’s stock “pew pew pew” pistol served me well from beginning to end, with its unlimited ammo and rapid fire response time to my button presses.

Part of the uselessness of some of these weapons comes down to the game’s enemies, of which there really aren’t that many. Less than halfway through the game, you’ve likely encountered them all. There’s the Roomba-looking robot that strolls around on platforms, and then there’s his cousin that kind of looks like him but has spikes and occasionally fires bullets at you. There are also you standard soldiers, along with a few other robotic pests that try to make your life miserable. Very few of them, however, require tactics that demand the use of your varied arsenal or even your bionic arm. It is a bit disappointing that FatShark made what seems like a great decision to give the players more tools, yet squandered the opportunity to use them for truly unique gameplay situations.

Rearmed 2 does mix things up a bit with some sniper and helicopter sections, where the player controls a large on-screen reticle to either pick off enemies or rain down a hell of bullets. While both are fun diversions from the jumping and swinging, they’re relatively mindless affairs in almost all cases. Massive bosses are also scattered throughout the game’s levels, each with their own patterns and weaknesses. It’s a bit disappointing that you’ll have to face the same bosses more than once, though, some of them with near-identical patterns used to defeat them each time. While some of them can certainly provide some competition, it has to be said that they aren’t quite up to par with the bosses in the first game, which made better use of the game’s bionic arm and limited weapon set. 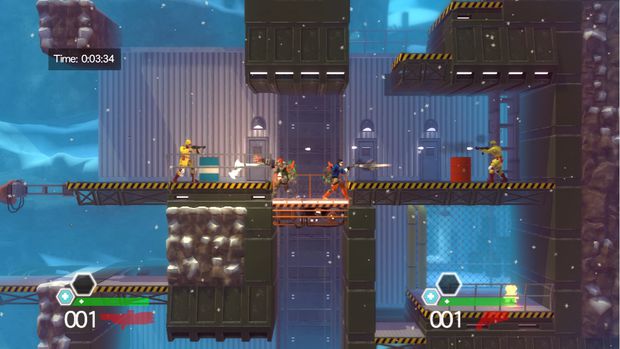 The game also ditches the choose-your-own-path style progression from the first game, instead opting for a more linear experience. Fortunately, there’s plenty of reasons to go back and play levels. On your first playthrough you’ll find yourself passing up plenty of items you can see and are inaccessible; as you earn certain items or upgrades, you can then go back and snatch up what you you missed. The game offers up plenty of variables for each of its level, from hidden items to keeping time, so gamers who are all about squeezing everything out of a game will certainly have plenty to squeeze with Rearmed 2. Cooperative gameplay and even the “Challenge Rooms,” which are as balls-out difficult and addictive as ever (with full leaderboard support) are back.

Fans of the Rearmed will find there’s a lot to love about the follow up, despite a few shortcomings. Because it’s ultimately not as impressive as the original, that doesn’t mean Bionic Commando Rearmed 2’s not worth checking out.