Similar to Evoland and its sequel, Bedlam is a game that hops between time periods and genres of gaming history. The latter, however, is a first-person shooter. I’ve grown up playing as many FPS games and mods as I could get my hand on, so I was very eager to jump in, knowing the game’s premise.

Thankfully, there are parts of Bedlam that brought me back to those “good ole days” of modding Half-Life and browsing gaming magazines for the deets on the newest shooter to hit the market. Unfortunately, parts of the game that remind me that not every genre is perfect. 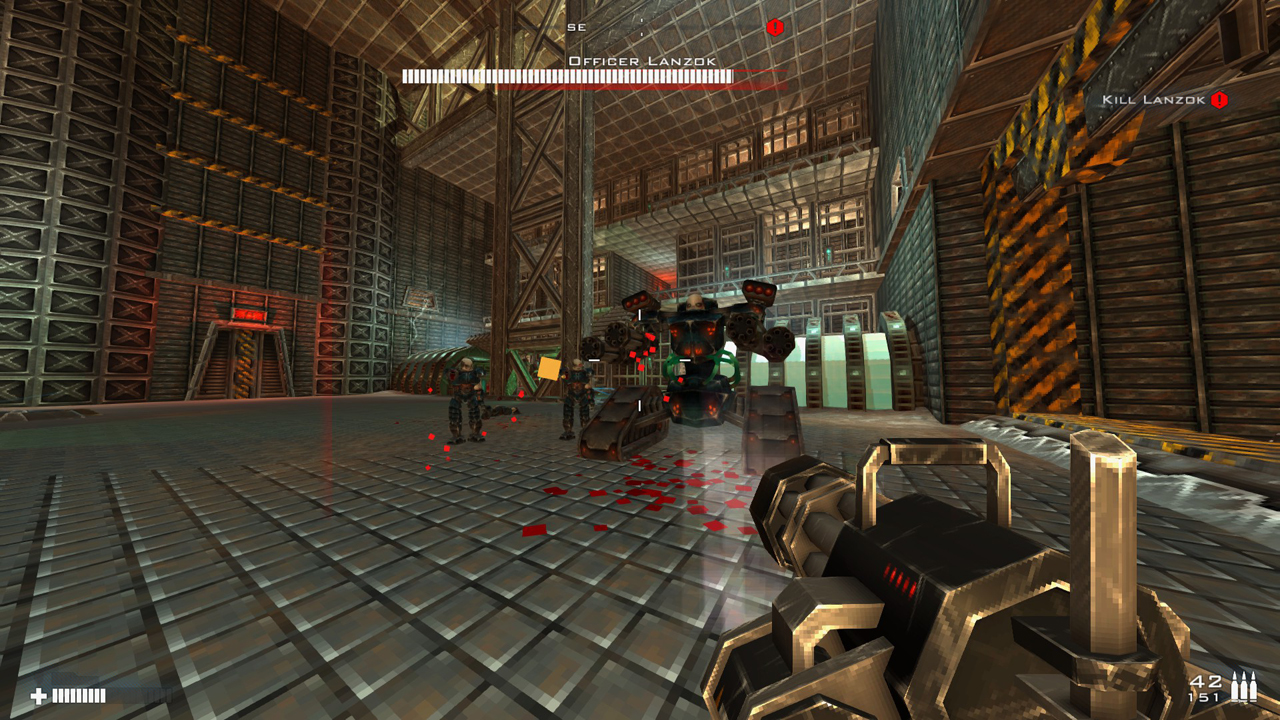 The player assumes the role of Athena, a normal everyday woman who has somehow woken up inside a virtual world of a video game. She makes plenty of self-aware quips throughout Bedlam, ranging from obvious and cringy to downright hysterical. She quickly realizes she’s in a shooter from the ’90s, and it’s not long until she manages to escape through a glitch in the game to be transporting to various other worlds.

Bedlam will take players through different time periods and genres of video games, but does eventually become too formulaic. Players will enter a world, complete its objectives, enter an “in between” glitch world, and then move on to the next section. While not predictable in the sense that the new world will be a surprise, the concept becomes rigid and boring.

There is an underlying story besides “look at the funny parody worlds,” and unfolds through in-game radio chatter and hidden sections within each world. It’s all based on the book by the same name, which I haven’t read, but seems to deal with essentially the same thing. In a way, Bedlam felt like a long winded way of saying “hey, you should read the book.” The story is somewhat engaging and certainly well written, but the lack of closure at the end of the game was a huge letdown. 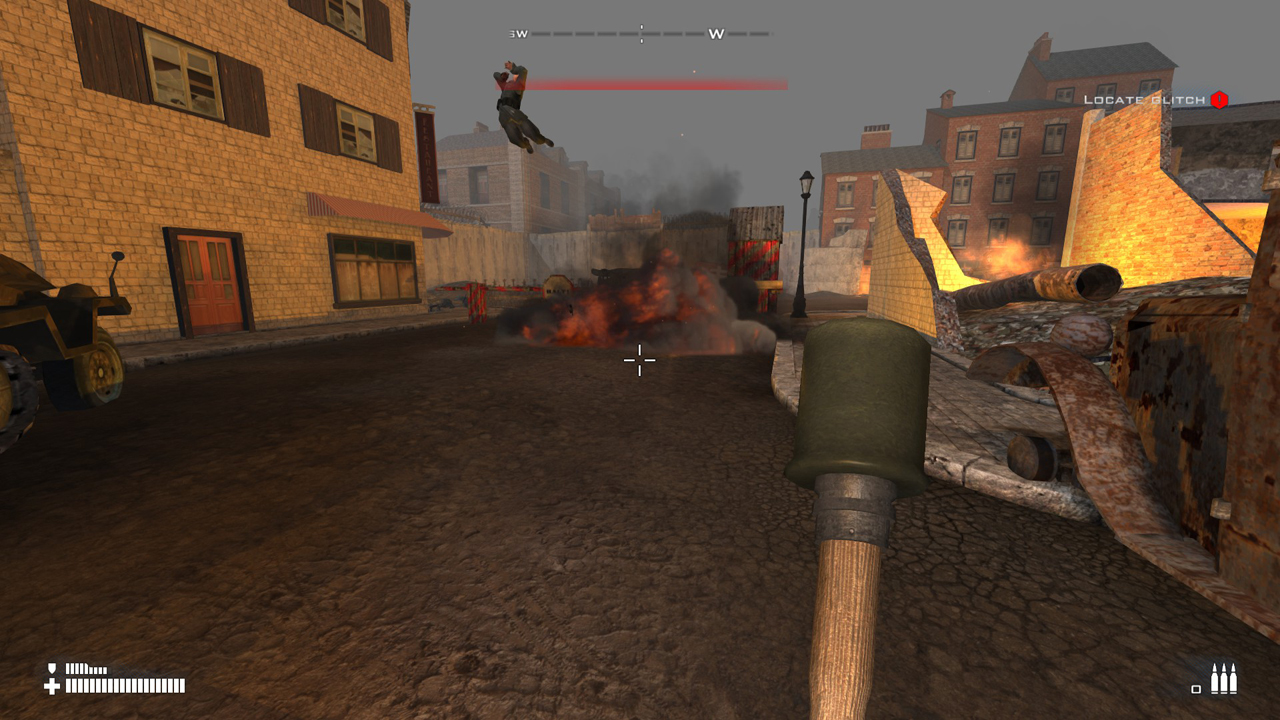 Bedlam handles like a first-person shooter, with one or two exceptions, and does a great job of nailing down the shooting mechanics. Each world has a unique set of weapons to acquire, but ammo for each gun is limited to its respective world. This sounds like an interesting mechanic on paper, but in reality the player gets so many guns that ammo is never an issue due to the wide breadth of options.

In fact, and I didn’t think I’d ever say this, but there are likely too many weapons. They all have their small quirks and differences, but all of the shotguns, machine guns, and pistols might as well be identical. The large number of options also makes it a pain to switch between weapons, especially when using the mousewheel. Every number on the keyboard is assigned to a weapon, and it never really felt worth it to memorize what was where.

There are also platforming sections that take place during the in between glitch worlds. I’m hesitant to even call them platforming sections since the player is literally jumping over small distances from one long rectangle to the next. They are in no way challenging, but I did die a few times, usually because I had no idea that there was no ground in between certain sections. Most of these sections are only there to keep the player busy while radio chatter occurs to thicken the plot.

Perhaps the best part of Bedlam is the “tour” through various styles of first-person shooter tropes. I won’t spoil them all here, but all of the classic FPS environments are present, and some that will definitely take players by surprise and have them laughing. Of course, going back in time does have its design downfalls, as some worlds are more barren than anything else, and there’s a few instances of poor mission design that will leave players frustrated and anxious to jump into the next section.

The last level in particular is especially drab. It falls into the classic pitfall of “throw everything possible at the player and see how they do.” Honestly, I used the explosive weapons to rocket-jump through just about all of it. Perhaps that was intended, but considering how wonky rocket-jumping physics are in Bedlam, I highly doubt it.

Each world ends with a boss, and they’re all impressively mediocre. The big thing shows up, player shoots it a lot — fin. The last boss in particular is tedious, and offers up just about zero challenge to the player. Despite the poor boss fights, the game has enough brilliant small moments to really stand out. After I had completed the game, the things that stuck with me were the tiny segments that used its plot device to its strength and didn’t adhere to the obvious formula that it was playing with. I’m confident in saying that there are enough of these to keep the player interested throughout most of the game. 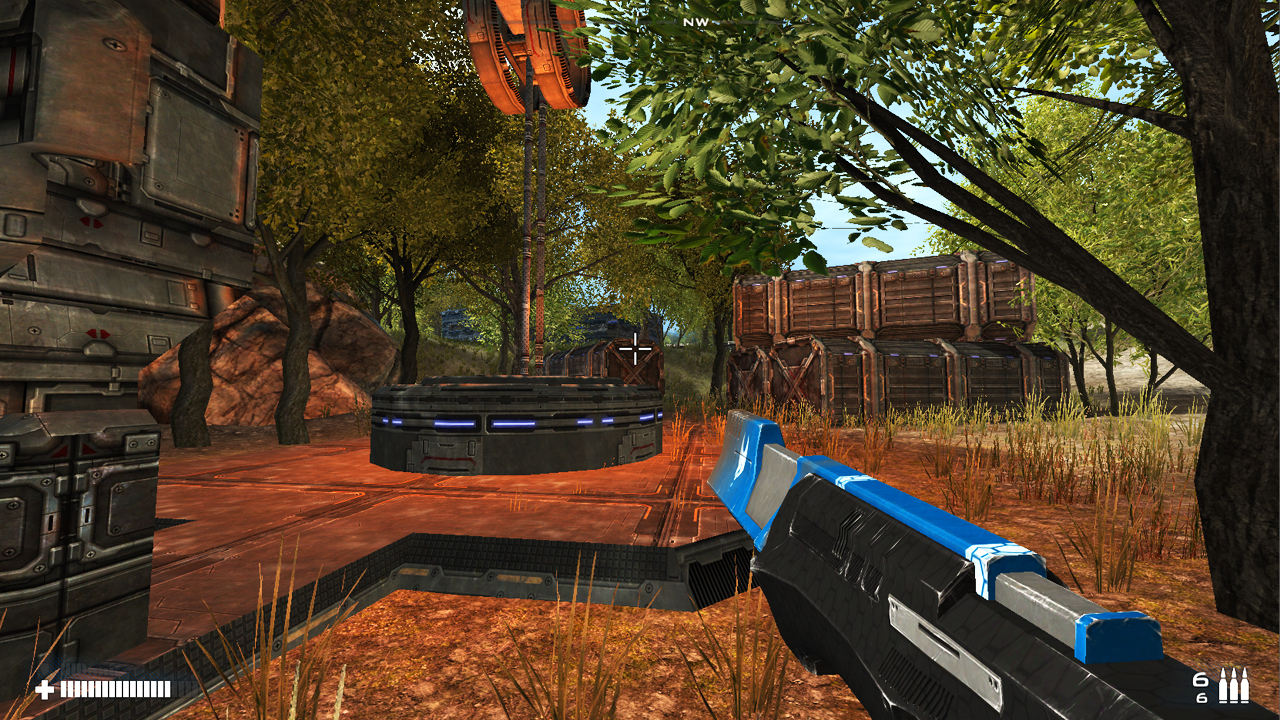 To accompany the decade-hopping mechanics, the game’s aesthetic varies from place to place as well. Most noticeably, the models get progressively better as the meta-titles get more modern. However, things like the health and body armor pickups remain the same throughout every world. It would have been interesting to see the developer also explore how health system evolved as the genre itself did, but instead we get floating health packs that are way out of place in most of the worlds.

The voice acting, at least, is top notch. The radio chatter is entertaining and very well done, it’s just a shame that a handful of times I was forced to read the subtitles because the surrounding noises, like being in a firefight, drowned out the actual voice acting.

Bedlam will take players on a jaunt through various first-person shooter worlds, but the problem is that none of them are particularly great. There are some absolutely wonderful and memorable moments strewn throughout the five or six hour experience, but they are brought down by some poor design in both the missions and boss fights, and essentially the entire last chapter. I genuinely did have some great laughs, and there are worse ways to kill an afternoon, but ironically Bedlam falls prey to many of the same issues of the games it apes.