Say what you will about twin-stick shooters, but their popularity doesn’t seem to be waning anytime soon. From arcade classics like Smash TV to more current fare such as Geometry Wars, people seem to like shooting at things is any direction, and the shmups that spawn from that desire are as popular as ever.

At least, that’s what indie developer Cold Beam Games is hoping. Manned by a single programmer in his bedroom, the maker of Beat Hazard Ultra wants to give the familiar ground laid by Geometry Wars and its ilk a unique spin by way of allowing players to use their own music collection.

We’re not talking mere customizable soundtracks, though. With Beat Hazard Ultra, the music also dictates how the game unfolds. 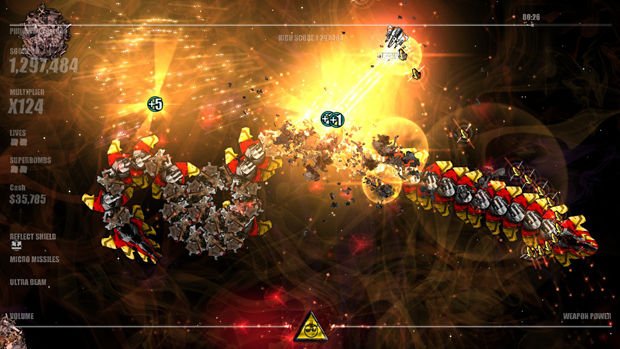 Beat Hazard Ultra owes a lot to Geometry Wars. Gameplay is similar, with one analog stick for movement and the other for directional shooting, except that the geometric shapes are replaced by actual enemy ships. There’s the same kind of frenetic spray of bullets and enemies on screen, only now, the chaos is controlled by the music. The game acts like a visualizer of your favorite PC music program, jumping and shining brightly as the music thumps and pulsates. Here, bullets and enemies are generated by the natural ebb and flow of the music you’ve chosen.

The original Beat Hazard was available on Xbox Live Indie Games for 400 MSP almost a year ago, and this title serves as an expansion on Steam and also as a brand new, standalone title on PSN. The game comes with a standard selection of indie rock and pseudo-techno tracks, all beat-heavy and bass-tastic. As the music builds, more ships are generated, and your tiny craft pumps out an amazing array of firepower. As enemies are destroyed, they often leave behind power-ups which increase your multiplier (which increase your firepower output), raise the volume of the song, and so on.

You collect monetary icons to purchase perks that grant you new weapons, lives, and more. Every time you pass a milestone in your cumulative score, you get to unlock another perk, which can then be purchased (and occasionally upgraded) from the Manage Perks screen. In addition to your stock shooter and smart bombs (mapped to the right trigger), you will unlock weapons such as the Ultra beam — a quick, powerful blast that can decimate anything in its path — or a shield to reflect enemy fire. The mini missiles are also formidable weapons, each mapped to one of the shoulder buttons or triggers. 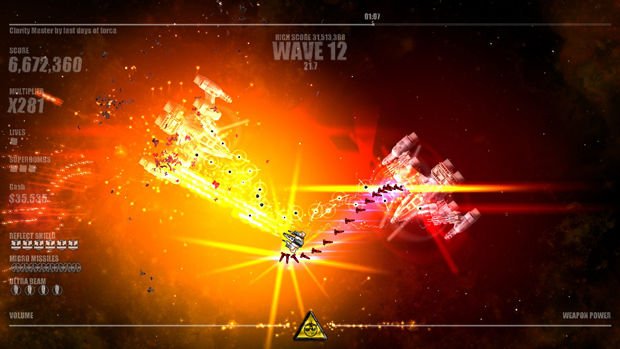 All this may sound like standard fare, but what really makes Beat Hazard Ultra unique is how it is affected by your collection of tunes. Popping in a track by the Beatles is just as satisfying as a track by the Ramones, and dance-heavy garbage like Ke$ha and the Black Eyed Peas can generate a huge amount of enemies and fire power, making for frenetic and catchy gameplay.

The way the music rises and builds is taken into account — enemies and even boss ships are generated based on how the music flows. This means that replaying the same song will generate the same ships, though the direction they fly in from might change. So if you see a giant snake boss when playing a track, chances are you’ll see it again when you replay that track. You’ll want a wide variety of tunes to mix up the action.

Visually, the game is decently detailed, though not necessarily spectacular. The ships vary in size and all look like some sort of of HD Galaga wannabes. However, this game is an epileptic’s nightmare — if ever a strobe warning were necessary for a game, Beat Hazard Ultra would be the one. Still, I guess it comes with the territory for a game that thrives on the rhythm of user-supplied audio. 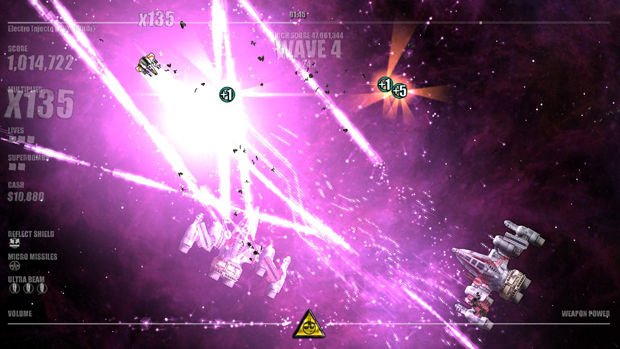 There are four gameplay modes. There’s Standard mode, where one song equals one game. Next is Survival mode, where a track list loops endlessly and you try to see how many waves of foes you can clear before falling. Boss Rush and Chill Out round out the set, the latter being a mode where you have unlimited lives and weapons to battle through an endless list of tunes (or at least as many as you have on your hard drive). Then there are selectable difficulty levels (for adding even more to the seizure-inducing visuals) as well as online multiplayer and leaderboards.

For a game made by one guy in his bedroom over the summer, Beat Hazard Ultra is an interesting treat. The controls are tight, the weapons are unique and varied, and the novelty of using your own songs gives you an endless library of levels and enemy variety. For shooter fans, it’s a fun and unique entry in the catalog, perfect for quick sessions (one song length!) and marathon survival runs alike.