The most fun I’ve ever had in a Battlefield game was in 2010’s Battlefield: Bad Company 2.

That’s not to say it’s the best title in the series or anything like that, mind you — just that it arrived at the right time for me and offered a level of environmental destruction I found easy to fall in love with. If I’m allowed to blow open the side of a building and get the jump on an enemy, I’m going to do that. Over and over again. There doesn’t even need to be an enemy.

Despite the fact that I’m not nearly as into military first-person shooters as I was even a couple of years ago — repetitive sequels will do that to you — Battlefield 4 has already, not even a full week after launch, surpassed my fondest memories of Bad Company 2.

If there’s one thing the Battlefield series isn’t, it’s surprising. That’s especially true coming off of Battlefield 3, with its depressingly linear, pointless single-player campaign and excellent-as-usual multiplayer. I imagine very few people play these games for the story and yet here we are again, forced to pay full AAA pricing in part for a component we will play through once, if ever.

While DICE has learned a fair few things about crafting a campaign since the last installment, Battlefield 4‘s story suffers from many of the same issues and ends up being largely forgettable. The good news is that it’s not quite so linear, and the characters — mostly just Kimble “Irish” Graves, played by The Wire‘s Michael K. Williams — at least threaten to be interesting.

It starts off well enough, relying on some slick set-piece moments and the graphical prowess of the Frostbite 3 engine. Impressive visuals can only get Battlefield 4 so far, though. Once the “wow” factor subsides, we’re left with a gameplay experience that’s not particularly entertaining now and won’t get any better with age. In non-combat segments, I often found myself running forward as fast as I possibly could only for my character to need a companion to catch up and allow yet another scripted door-opening sequence to proceed.

The first third of this narrative about a conflict between the United States, China, and Russia in the near-future isn’t half bad, though not long after that point, boredom begins to take hold. You’re going through the motions, taking out predictable enemy troops and charging forward because that’s what the game says to do. It’s sad to suggest a campaign as short as this can outstay its welcome — we’re talking beatable in an afternoon, here — but it’s true. And the part where you have to escape from a prison? I’m not even mad anymore. Just disappointed.

While the campaign is forgettable, multiplayer is anything but. Yes, moments of frustration are bound to occur in any competitive game like this and Battlefield 4 is no exception. When you’re in the midst of an evenly-matched 64-person battle with a tight-knit squad, however, it’s bliss.

Arguably the biggest new feature is also the silliest sounding — “Levolution.” You’ll likely know this from the oft-talked-about map Siege of Shanghai, which features a collapsible skyscraper that players can engage one another inside up until the point when it falls. Even then, the match doesn’t stop — the control point previously found at the top of the structure is now situated on a mess of rubble quickly accessible by land and sea.

Other examples of the game mechanic include a breakable levee that floods low ground, oil spills that can be set ablaze, and a tropical storm at sea. Some are better implemented than others, but all successfully work to make Battlefield 4 more dynamic. Levolution complements what this series excels at: providing players with the vehicles, the scale, and the freedom to create their own ridiculous emergent moments.

In addition to these grand moments of destruction, DICE has taken a cue from Bad Company 2 by allowing players to tear apart smaller buildings using explosives. It’s a noticeable step up from what was possible in Battlefield 3, but some will be left wanting more, myself included. 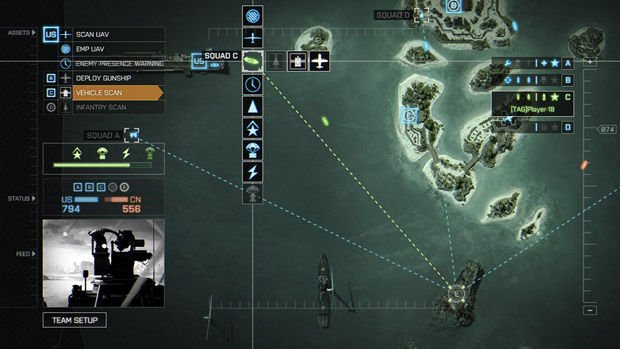 Battlefield 4 may not look it on the surface, but the game sports quite a few minor additions and tweaks to the familiar yet still rather effective formula. The ability to lean over cover and around corners, five-person squads, a spectator mode, tweaks to which classes can use which weapon types, Commander mode, and perks earned in-game for squad play are some of what’s new for this installment. I could dive into them, feature by feature, but that’s mostly unnecessary — the core experience remains the same, and that’s perfectly okay. Better than okay, actually. It’s what most long-time Battlefield players seem to want.

I had thought that the return of Commander mode would be meaningful considering all the fuss DICE made promoting it. That’s unfortunately not been my experience. Unlocked after leveling up to rank 10, this mode allows one person on each team to monitor the match from a map screen.

These commanders can assign individual squads of players to go after certain objectives, scan for vehicles and troops, and even call in airstrikes from time to time. It sounds neat — and starts out that way, admittedly — but I lost interest before long. Your impact on the match’s outcome isn’t always perceivable and as a result, I’d much rather spend my time on the ground, fighting in-person. Perhaps this mode is better suited for tablets, which is an optional way to play.

One of the bigger draws has always been vehicular combat and it’s still as fun and frustrating as ever, depending on your familiarity with the type of vehicle. I still cannot reliably pilot aircraft to the point where I simply won’t take them; I’ll feel too guilty when I inevitably crash, if I’m not first taken out by the opposing forces. Too much pressure.

With Battlefield 4, at least, there’s now a Test Range, launchable from Battlelog just like single-player and multiplayer are. Here, you’re given the opportunity to try out vehicles in an open environment free of judgment. It’s about time we had something like this and while I’d love for DICE to provide a real in-depth set of tutorials, it is a step in the right direction.

Thankfully, the vehicle lineup also includes quad bikes, tanks, boats, and more — the usual stuff. Naval combat is a particular highlight, and that has a lot to do with the way Battlefield 4 handles waves. In short, they aren’t merely cosmetic. Going back to Levolution for a second, one of the maps, Paracel Storm, brings in huge waves once a storm starts brewing. It’s my favorite multiplayer map in recent memory if for no other reason than getting (what feels like) twenty feet of air in a jet ski is an undeniable joy.

There are ten maps in total — some big, some slightly less big. On the whole, I found this to be a strong group overall, though it’s worth pointing out that I’ve always preferred the large-scale nature of Battlefield. Maps like Operation Locker and Dawnbreaker are there for players who prefer closer-quarter engagements, however. As always, certain modes on certain maps can essentially be broken if played with too few or too many players. Once you’re familiar enough to know them each by name, such situations are entirely avoidable. 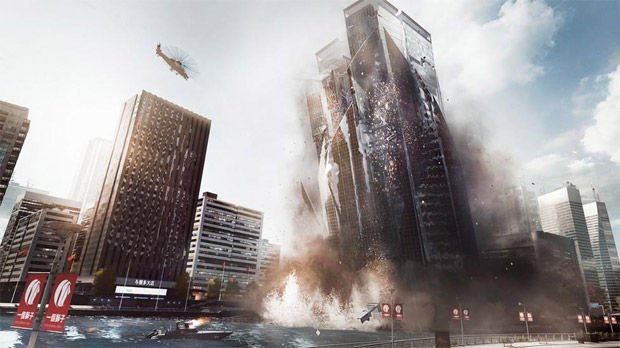 The modes you’d expect from the vanilla Battlefield 3 are back, plus three new ones: Obliteration, Domination, and Defuse. It’s Obliteration that I found to be the most interesting and, after getting used to the way it flows, among the most satisfying. A bomb will appear somewhere on the map, resulting in a mad dash to grab it and plant it on one of the opposing team’s bases. It’s then got to stay untouched for long enough to go off which is another matter entirely.

What usually ends up happening is your team will finally manage to bring the bomb to a target only to be unceremoniously taken out at the last possible second. The other team then quickly snatches the bomb up, bringing it all the way over to one of your marked points — and then history repeats itself. It’s a thrilling, sometimes maddening tug-of-war. All that said, tried-and-true modes like Conquest and Rush are where the majority of us will spend our time.

It’s probably for the best, then, that Battlefield 4 plays it safe. It’s a game full of minor improvements to what remains one of the best multiplayer experiences available but, at this point, there’s not much left to improve upon without taking some genuine risks for the sake of innovation. DICE is hitting diminishing returns and I’m curious to see where the series goes from here.

For the time being, however, this approach works — Battlefield 4‘s multiplayer is strong enough to carry it. The single-player campaign isn’t nearly the waste of time that it was in the last game, though it still ends up being an unnecessary inclusion. One can’t help but wonder how much better Battlefield would be if DICE quit striving for back-of-the-box feature parity and concentrated its efforts entirely on multiplayer. I hope that day comes again.