The road to rock stardom

My family is very musically inclined. My father sings, and my mother sings and plays guitar. My wife’s family is also musical; playing piano, guitar, drums, etc. between her, her brother, father, aunt, and so on. When I was about 12, I got an acoustic guitar for my birthday. I didn’t start taking lessons for it until I was 17, in high school, once they finally started offering classes.

I’m the mutant of the family. I have no real discernible musical talent. While I do a passable job at singing, I can’t really play any instruments. And yet…I own four guitars. Real ones. I also own four plastic guitars for games like Guitar Hero and Rock Band. That’s how you’ll get me to learn and play: make it a game.

BandFuse: Rock Legends was made for people like me. And people like my family. And sometimes, both at the same time. 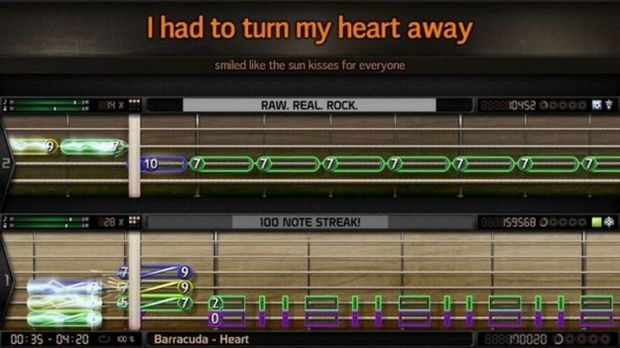 All right, so we know that this isn’t the only game out there that wants to teach you how to play guitar with a real instrument. Plenty of games have tried this approach, with only one really having any great success with it. So, what is it that BandFuse does differently?

For starters, the layout is much more user-friendly. Rather than having the note highway diagonally, or seemingly flying at you, the fretboard looks as though you’re looking straight at your guitar. Simple number icons and colors on each string are used to determine which finger and which fret you use, as everything is set up in standard tablature.

The game is built with the beginner in mind. There are a series of video tutorials, led by the games “mentors,” such as Slash, Bootsy Collins, Zakk Wylde, and more that walk the player through even the most basic of steps. And while some of the lessons may only seem as though they’re reading the key points off a cue card (and Slash mostly seems like he’s barely interested in being a teacher), these are still valuable skills for beginners like me. 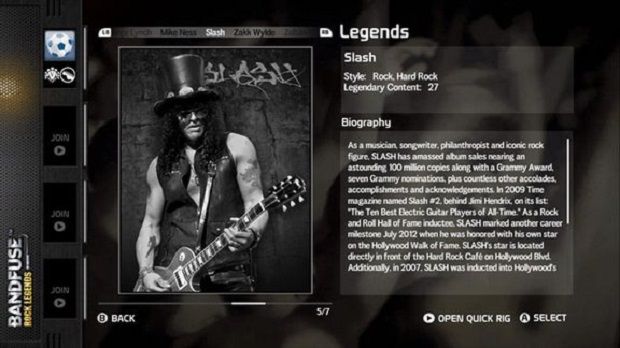 For those more familiar with the guitar who want to improve their chops, the difficulty can be increased through five different levels of skill. I will admit, however, that there is a bit of a learning curve from beginner to the next, but the game caters to all skill types. The tutorial videos are the biggest help here, and can of course be revisited if you’re not quite moving with the pace or need refreshers on terminology or technique.

As I said, however, there is a bit of a noticeable jump between difficulties. While the beginner mode is great for a guy like me, for an intermediate player, transitioning to one of the harder difficulties can be more taxing than anticipated, as they throw a lot more notes your way. Still, there’s more than just tutorials. If you just want to play songs, there’s plenty to chose from here, and plenty of ways to play them.

Shred U is where most of your lessons lie, but there’s a whole career mode to play through, where you begin as an opening act all the way through headliner. You can even play this multiplayer, hooking up multiple guitars, bass, and even vocals. The vocal sections are especially of interest, as these can be done solo as well (for a whole karaoke take on the game) as well as essentially being a borrowed asset for the game. That’s right, the vocal note detection and regestration of those notes is the same technique developed by Harmonix for its Rock Band games here, and Realta has licensed it for use in BandFuse. Very cool. 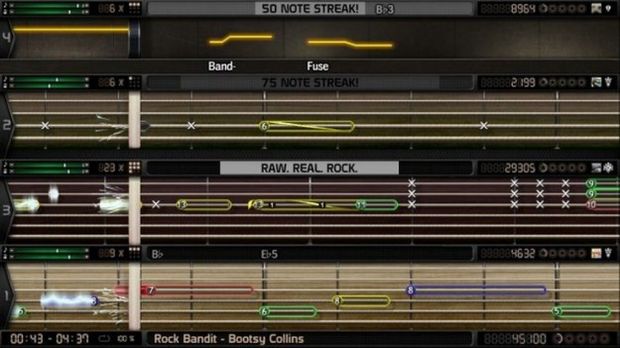 Beyond that, there’s the Lick Lab, which allows you to dissect any song into as many parts necessary to learn how to play it. There’s even a section for true virtuosos that provides a wide variety of generic backing tracks for several musical genres that allows you to play along as you see fit.

The thing that most impressed me with this title is the attention to detail as far as sound is concerned. Realta has made sure that latency and lag will not be an issue, and the accuracy and responsiveness of the game was a constant treat. There’s even an adapter for the Xbox 360 version (included with the package) that connects to the back of the system allowing for sound to pass through to your TV or sound system — or even directly to headphones — to ensure an accurate response. This is only necessary if your set up is connected primarily via HDMI, as there tends to be latency issues with sound via that single connection.

It’s impressive to see a game such as this, focused on not only teaching you how to play guitar, but also how to have fun with it. The multiplayer extensions are a blast (if you have that many guitars, or friends that can play), and the karaoke and backing track selections can really further the creativity. While the jumps in difficulty can be drastic at the higher levels, there’s still plenty of ways to adapt, and BandFuse surprises at each step.