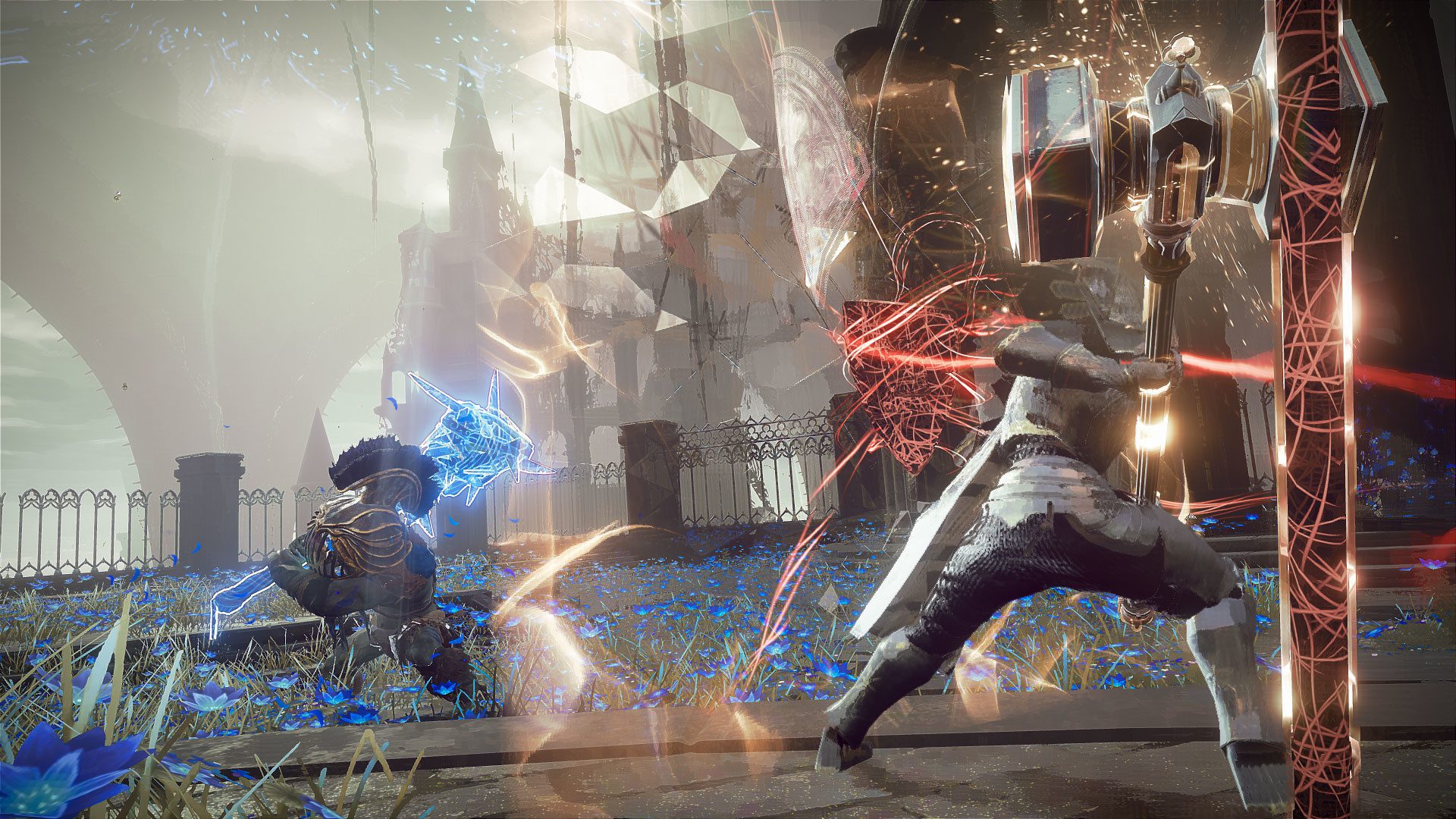 Platinum Games is seemingly at a crossroads. As a follow-up to Clover, one of the finest development studios of all time, its reputation was legendary. As far as single-player action romps go, MadWorld into Bayonetta, into Vanquish, into Metal Gear Rising, Wonderful 101, and Bayonetta 2? What a run! Then Legend of Korra came and pumped the breaks a bit on expectations. Since that turning point, Platinum has been spreading its time across multiple studios, including collaborating with Square Enix for Babylon’s Fall.

It’s a weird one. 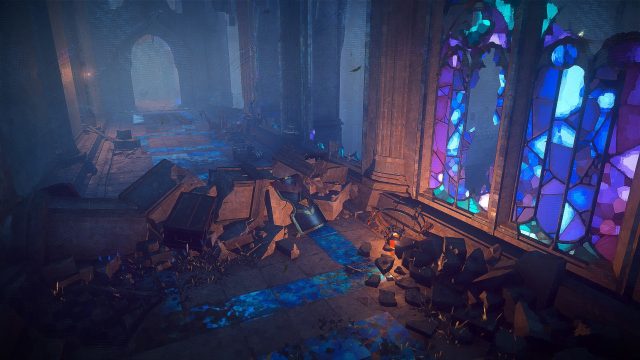 When I talked about Babylon’s Fall in my preview four months ago, I noted the promise of the core action system. But at that point a lot of the freemium elements weren’t in full swing, and the assumption was that the tower would evolve and shift into something radically different the more you progress. That didn’t really pan out.

From minute one, asking me to mandatorily link my Square Enix account wasn’t a great sign. It even warns you multiple times that “you cannot relink this,” so my first emotional experience with the game was anxiety as I double and triple-checked menu text. 2022 in a nutshell. My first-impression blues didn’t get any better once I was asked to navigate a weird browser UI for seasonal news dealing with the game. You also can’t delete your characters for some reason, a notification that I got right after logging in. This game is a house of cards!

After actually getting in and creating my character, I got to experience a brief moment of joy, as I took in the incredibly weird story setup, which feels authentically Platinum. Your job is to climb and explore the mysterious tower of Babylon, amid some really bizarre (and enjoyable) English voice acting choices (Japanese audio is in too if you can’t deal). The big narrative gimmick involves the “Gideon Coffin,” which is attached to the backs of candidates in a creepy ritual of sorts that kills most of the participants — but you’re special, and the story beats are somewhat driven by that.

I actually really enjoyed many aspects of the story, and again, like a broken record, I have to stress that I wish it was either a fully single-player game, or eliminated the live service elements altogether. Some of the little moments between missions where characters are just chatting at a tavern show the potential of this world, and the story portions can be exciting. The ability to equip vanity attire (transmog) shows that they cared about the design of how characters look and operate in a more granular way than expected. A lot of thought was put into this game.

Visually, Babylon’s Fall has gotten a little better since the shaky reveal, but it’s still rough, especially when it comes to character models (and the number of repeat enemies). There are elements like the sound design that are trying to feel stylish, but stumble due to what could be time constraints. It’s a really weird game that I’d love to have more insight on when it comes to the developmental process.

When you’re actually fighting stuff, it’s a ton of fun. Gameplay is the saving grace that made this assignment worth doing, which is no surprise from Platinum. At its foundation it involves a light and heavy attack system, but with a twist. You can actually assign weaponry to either of the two, which fundamentally changes your build and playstyle.

When you add on the two “coffin combos” (which are the bread and butter of gameplay), it gets even cooler. Those are linked to L2 and R2, and can have two more weapons linked to them. Coffin abilities operate independently from everything else, so you can queue up a hammer smash even if you’re on the ground or mid-combo with something else. It’s really refreshing, lightning-fast at times, and responsive. Dodges are slick too, as you get a quick non-annoying blur effect when you hit at the critical time. Mixing and matching ranged and melee attacks showcases the potential of the system in a way that a lot of people are unfortunately never going to see.

But I hit a fun wall when I was constantly doing the same exact things over and over. You know how in Monster Hunter when you load into a sandbox, it errs on the side of feeling open? Well Babylon’s Fall offers linear dungeons instead of sandboxes, and many of them look the same. The most constraining thing of all is variety: something I already hinted at with the lack of enemies to fight. You see that room in the above screenshot? I’ve been there like over 100 times, no matter how many different ways it’s dressed up. 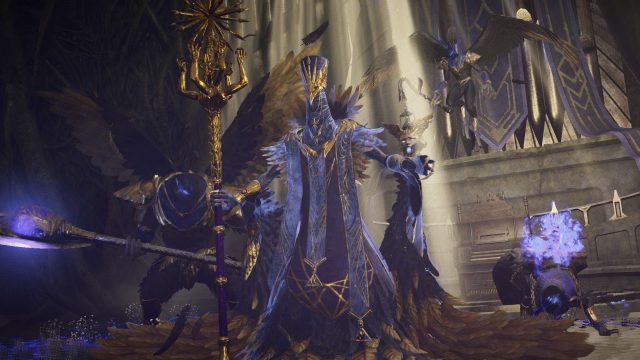 Whether I queued up for solo story quests, party quests, or quick match runs, everything felt homogenized, and small iterations like lava floors don’t fundamentally change that. Bosses do, but they’re few and far between, as most of the challenges are the same hallways, remixed, and the same enemies, slightly tweaked. When combat is clicking in the moment against an enemy that actually matters, with a build that you’ve come up with that sings, it’s easy to forget about some of Babylon’s Fall‘s issues. But you’re just not doing that often, as a lot of the game is confusingly spent in hallways and menus.

The menus are, surprisingly, a big point of contention. It’s laborious to navigate even the most basic things and the UI is sluggish; even during the premium shop portions, which is probably a no-no for any publisher. So this all sounds like a free-to-play game right? Wrong. Babylon’s Fall is $60, with a $99.99 digital deluxe edition. Looking at the in-game item vendor and having to sift through multiple premium pages was strange. Because it’s a live service game with seasons, it’s really hard to stay invested in what’s at the top of the tower, and seeing the daily login bonuses pop up on top of everything else was a bummer. Even providing the first battle pass for free feels like a trap, and just leads to more menus.

Live service games often put the cart before the horse, and their lifespans are really dependent on how many people are playing and pumping money in (because of the way it necessitates constant updates with its vicious cycle). Even if there are people like me who will ingratiate themselves to the action system, Babylon’s Fall is almost impossible to recommend, because you could be buying into an experience that has its plug pulled before the end of the year. Remember Let it Die? That started off with a similarly polarizing reception (and the same “tower climbing” concept!), but grew into something more; albeit keeping its free-to-play machinations. Maybe something like that can happen here, but you can wait on that.

Every time I hit a frustrating or repetitive portion of Babylon’s Fall I found myself wishing it was just a fully single-player game that was somehow worked into the NieR/Drakengard universe. To see a Platinum joint end up like this is disheartening. Again, the foundation is there, and I have no doubt that this would have been a stronger game that would have spread via word of mouth to action enthusiasts far and wide if it didn’t have the freemium elements. Whatever happened behind the scenes, I hope it wasn’t their call, and I hope this isn’t the type of product they’re going to focus on in the future.