With ATV Wild Ride, Renegade Kid veers wildly from territory its best known for, be it the nightmarish halls of a mental hospital in Dementium, or the sci-fi action of Moon. But the developer feels right at home with its latest, delivering one of the best racer offerings on Nintendo’s handheld to date.

ATV Wild Ride isn’t breaking any new ground, taking cues from games that have come before it like Black Rock’s Pure and even Nintendo’s own Excitebike 64. It plays it safe, a straightforward racer where players earn nitro for tricks, cashing in their boost to gain ground over their opposition. So it’s not really what ATV Wild Ride does that makes it so great, it’s really how well Renegade Kid was able to pull it off on the handheld.

While the Nintendo DS is best suited to colorful, 2D games, Renegade Kid has never shied away from pushing the handheld into the third dimension. With ATV Wild Ride, the developer does it again, and the results are certainly appreciable on the handheld’s small screen. The game’s impressive engine also lends itself to some smooth-as-butter movement, at what appears to be 60 frames per second. You certainly appreciate it in action, as it adds to that sense of speed you’re looking for in any racer, handheld or otherwise.

Behind the wheel of an ATV, fans of arcade-style racing will feel right at home. Wild Ride eschews the use of the touch screen, relying entirely on the game’s physical controls. No fault of the game, the Nintendo DS controls do feel a bit cramped for my tastes, a complaint I’d have of almost any racer on the handheld. But Renegade Kid had enough forethought to include multiple control schemes, and with some time I was able to ease right in without much trouble. 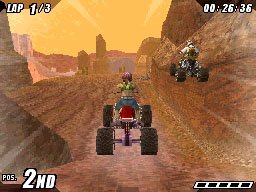 The ATVs themselves feel good on the track, even on the tightest turns I never felt out of control. Pulling of tricks is a simple combination of the buttons and use of the d-pad. It’s a three-tiered system that ranges from easy one-offs to more wild tricks that will end in disaster if you don’t have enough air. Fortunately, most of the game’s tracks are cleverly designed to take advantage of the tricks system. Ramps and hills are generally placed in such a way that you’ll be able to gain enough to pull off some of the biggest tricks, gaining enough boost to get ahead in a pinch.

There’s also a impressive amount of game content crammed onto the DS cart, including a World Tour mode that spans more than 20 tracks across a variety of exotic locations. Broken up into four tours, I found that the earliest races were almost mind-numblingly easy. The spike in difficulty once you hit the later races is somewhat of a shock, however. It goes from an enjoyable, leaned back cruise-control racing experience to nail-biting near-miss first place finishes… and fast. It’s certainly not a bad thing — there was a point when I was concerned Wild Ride wouldn’t offer me any challenge at all.

While World Tour mode can be completed by competent racers in a relatively short amount of time, Wild Ride does offer up a number of unlockables, varied racers and ATVs to put to the test. I found myself going back for more, even after I completed the tours, because it just felt right in my hands. The game also supports local multiplayer, which I unfortunately didn’t get a chance to use myself, but should go a long way to adding value to the Wild Ride experience. 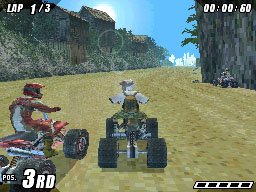 If you had to fault Renegade Kid for anything about this excellent handheld racing package, you could probably say they played it too safe. It’s fairly straightforward in almost every way, never really venturing into any new territory in terms of racing or trick mechanics. Still, if you manage to hit all of the right notes, it sometimes doesn’t matter that you’re playing the same song as your predecessors, because the notes still sound damned good together.

Ultimately, it boils down to this: ATV Wild Ride is your only real choice for an arcade-style ATV racer on Nintendo’s handheld. It’s not that there are no other options, but where others have tried and failed, Renegade Kid succeeds in building a solid portable DS racer with ATV Wild Ride.