Almost 10 years ago, Portal showed us what a first-person puzzle-platformer can be. It was built on an incredible gameplay mechanic at its heart, but it also excelled in art direction, writing, voice work, and pretty much every other department. It set the gold standard to which other puzzle-platformers would be compared.

Attractio clearly takes influence from Valve’s romp, but it only gets half the equation right. From a pure gameplay perspective, it’s a smart take on the genre through gravity manipulation, featuring some puzzles that prove to be real doozies toward the end. Almost everything else about it is dreadful. 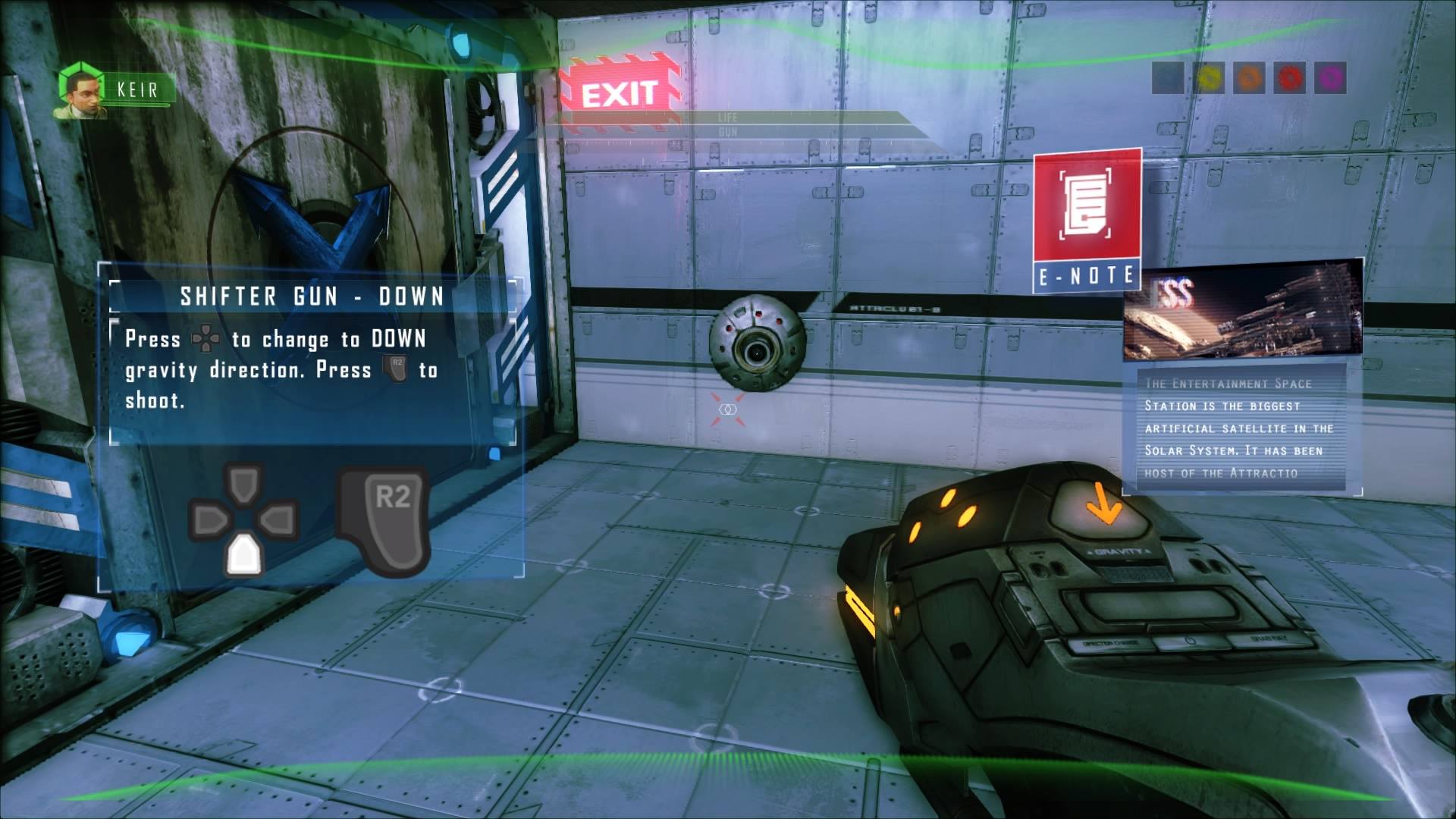 Attractio is a reality show that takes place on a space station, which allows for unconventional implementation of gravity. Each object (including the participant) has its own gravitational direction at a given time. At first, there’s not much to it, with cubes holding down (or up) pressure plates in order to keep doors open, but eventually each contestant gains access to a piece of gravity-manipulating technology.

Mia gets boots that allow her to flip her own gravity vector. Keir gets a gun that can change the gravity for the special blocks found in the arenas. Dalek is fortunate enough to have both. Each of the different sections has its own strategies to employ, but the best area comes when Mia and Keir team up in a sort of solo cooperative mode, two characters controlled by one player.

The puzzles are almost too easy in the beginning, but they get considerably tougher toward the end. A lot of it is the fair type of difficulty, where logic and reason eventually prevail. Every now and again, the difficulty comes from a poor design choice that feels more cheap than clever. For instance, in one puzzle I knew the general idea of what needed to be done (get this box to that location), but the way to do it involved getting just the right line of sight with the gun, through a mostly opaque barrier.

With those few notably bad exceptions, Attractio features some great puzzle design. But that’s where its virtues end. The story cribs too closely to its Portal influence: player goes through discrete puzzle chambers in a dystopic future; player finds out the people running the chambers aren’t trustworthy; player escapes the prescribed areas and runs amok behind the scenes; player eventually destroys the system from the inside. It’s utterly predictable, though it acts like the big twist is meant to be shocking.

The writing is pretty bad too. Each of the three main characters is unlikable in his or her own way; Keir is annoyingly zealous, Mia is aloof, and Dalek is just a jerk. The awkward couples with severely stilted, almost-robotic voice acting in what are some of most cringeworthy cutscenes and voiceovers in recent memory.

The biggest misstep is when the art direction gets in the way of the puzzle design. By default, the HUD is overly cluttered with unnecessary information (see screenshot above for an extreme example). The worst is how glass windows — which players can neither move nor shoot through — are almost entirely invisible (see screenshot below with box at rest on glass). Another puzzle element, barriers that block boxes but not humans or gunshots, are translucent on the side of opaque, especially from afar. When shooting through something is possible and necessary, being able to see through it too would certainly help. 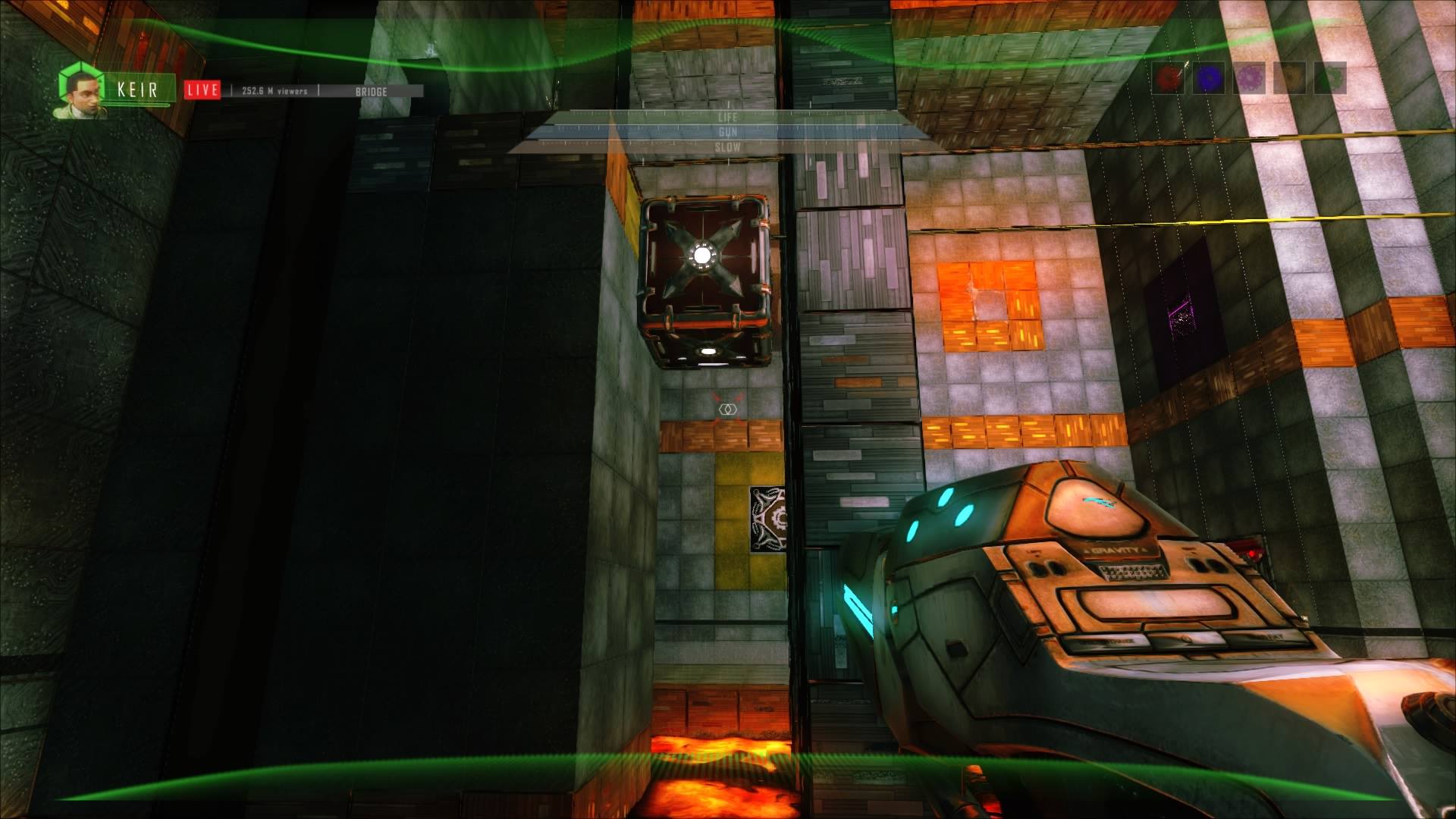 And so I find myself ambivalent about Attractio. From a pure gameplay standpoint, it has some clever puzzles, and it is substantial enough to have kept me busy for a good 10 or so hours. But it lacks the total package to be a wholehearted recommendation.

The plot is banal, the writing is tone deaf, and the acting is wooden. Those who can ignore the dressing and focus on the puzzles alone can find some good head-scratching moments and interesting logical interactions. Taken as a whole, Attractio is bipolar; its highs are high and its lows are low. Averaging that out makes it mediocre.