For the pretty pretty princess in all of us

It’s a well-known fact that the gaming industry is sorely lacking in strong female leads, with the game shelf at the local Best Buy sometimes looking like a page torn from “Who’s Who Among Expressionless White Guys.”

Thing is, developers are definitely taking some steps in the right direction, with the March 5th release of Square Enix’s Tomb Raider showing that women in games can be portrayed as more than a pair of boobs carrying a gun.

Still, it’s worth noting that another female-led game dropped on the exact same day, one which, though perhaps less progressive than the adventures of Miss Lara Croft, is still a fine example of female protagonists done right. 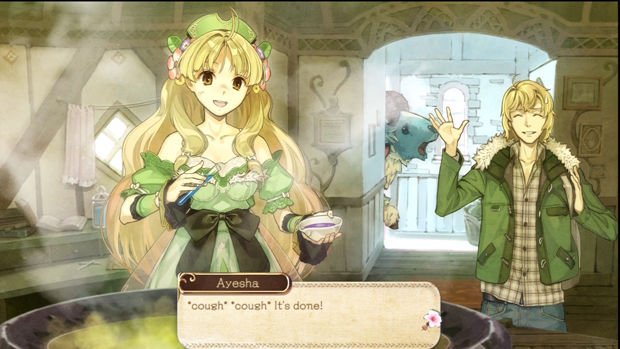 Atelier Ayesha: The Alchemist of Dusk is the fourteenth entry in Gust’s long running Atelier series, an RPG franchise which has experienced only limited success in the west. As both the first installment in a new Atelier universe, and the first Western release to be published by Tecmo Koei rather than NIS America, Ayesha looks to be a fresh start for the series.

It features a notably different tone than the previous ‘Arland’ trilogy of PS3 titles (Rorona, Totori and Meruru), which are perhaps as well known for their adorable protagonists as for the too-hot-for-Australia sexual fanservice.

Though the skimpy swimsuits stick around as optional DLC, the game’s storyline looks to attract an audience beyond the Lolita fetish crowd, Ayesha’s storybook fare so innocent it’s actually hard to imagine what earned this one a T for Teen rating.

At the outset of the game we’re introduced to Ayesha, an adorably naive apothecary who spends her days brewing medicine to sell to passing merchants. During a visit to her sister’s gravesite within the nearby ruins, Ayesha encounters the ghostly specter of her missing kin, a passing academic informing her that her sister may well be alive.

Now filled with the resolve to discover the truth behind her sister’s disappearance, she sets out on a search for answers, meeting a variety of new friends and expanding her natural alchemic skills along the way. 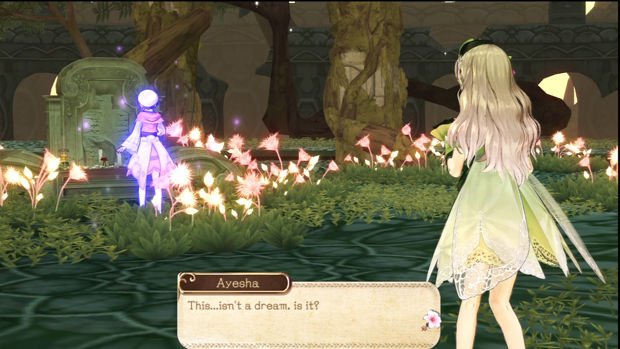 Overall, the plot is your standard cutesy-anime fare, with spunky underage witches and attractive young swordsmen rounding out the by-the-books cast. It’s honestly good fun, and a refreshing change of pace from the obtuse philosophical narratives other Japanese RPGs offer.

Most importantly though, with the creep factor removed, Atelier Ayesha is a game one almost wants to recommend as a starter RPG for younger women, proving that one can wear a flowery dress while still kicking ass in monster-infested dungeons.

I must admit that as a red-blooded American male there’s only so much candy-sweet narrative I can stomach before starting to choke, though if I had a twelve-year-old daughter and the kind of reckless parenting style that involves addicting my children to fetch-quests, this would be an automatic purchase.

Along with the new narrative tone comes a few small additions that definitely help improve the Atelier experience. During combat, characters can now expend a slight portion of their action gauge to move about the battlefield, and maneuvering into position for a back attack or to provide cover to a weakened character adds some needed variety to the simplistic turn-based system.

Meanwhile, the alchemy process has also been altered, now allowing players to use a wider variety of ingredients in their recipes instead of being forced to tediously seek out specific items within the game’s dungeons.

As item creation is still the most confusing aspect of the game it’s nice to see an effort to streamline it, though the game still yearns for a dedicated tutorial mode to explain what it means to add the “flame soul” ability to a medical bandage. 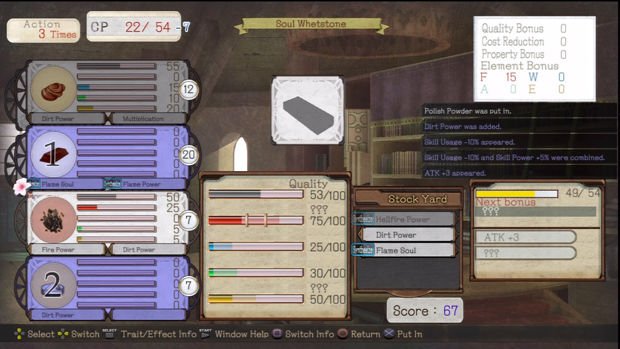 Despite the sense of newness surrounding Ayesha, the series’ basic formula remains almost entirely intact, for better or for worse. The checklist style of game design tasks players with rushing about the barebones world map in order to complete an ever-growing list of minor tasks: clearing areas of deadly monsters, gathering up new alchemy materials and fulfilling an endless procession of fetch quests.

The one thing which helps to spice up these otherwise unremarkable elements is the alchemy mechanic, every aspect of the game tying into this item creation system in some way. Throughout the game Ayesha fills her inventory with a baffling variety of ingredients, found at gathering points scattered about the world, dropped by fearsome monsters, or simply purchased from the game’s many vendors.

Back at the workshop these ingredients can be jammed together to form new equipment, necessary quest items, and a wide variety of bombs and tools for Ayesha to use in combat.

Notable is that unlike regular RPGs, monsters in Atelier Ayesha don’t carry wallets, and the only reliable way to fill one’s coffers is to deliver requested items to the various NPCs littered about the game’s collection of towns.

This money can then be spent on expensive alchemy books, allowing Ayesha to craft exciting new items, requiring her to seek out materials from a newly discovered dungeon, and so on the cyclical gameplay rolls.

The real hook is that, though the tasks Ayesha is given are rather easy to complete, the plucky alchemist has just three years to plow through the various quests and save her sister. 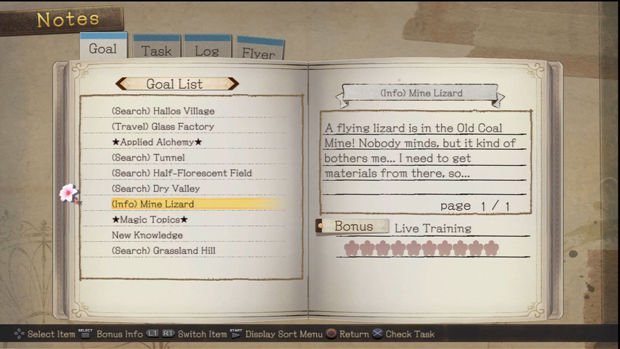 Almost every action in the game; gathering items, traveling about the map, performing alchemy, etc; expends a certain amount of time, and I definitely felt a sense of anxiety when my lack of planning for a particularly challenging dungeon forced me to lose a week returning to town for healing potions.

At its heart, Atelier Ayesha is less an RPG than a lesson in resource management, with your most limited resource being this ever-ticking game clock. Players who waste their time gathering needless materials or crafting unnecessary items will find their adventure ending with Ayesha’s sister trapped forever in the ghost realm.

Meanwhile, those who can expertly budget their time will not only solve the mystery of the ruins, but hopefully have some time left over to improve their friendship level with the game’s various characters, earning all of the game’s special endings.

The real tragedy about Atelier Ayesha is that all of the elements involved are so well polished, yet still feel as though they’d serve much better with a true RPG adventure beneath them. Instead we’re left in a sort of repetitive fetch-quest hell, with some enjoyable character skits scattered around to help disguise the tedium.

The minimal exploration elements make the game feel less like an epic quest and more like a prettied up text adventure, with the majority of the map areas just a single flat environment filled with some sparkly gathering points and a random assortment of monsters.

Another area where the game suffers is its inconsistent graphics.Though Atelier’s anime-styled character models are make incredible use of cel-shading, the game’s environments are largely flat-textured bores from out of the PlayStation 2 era. 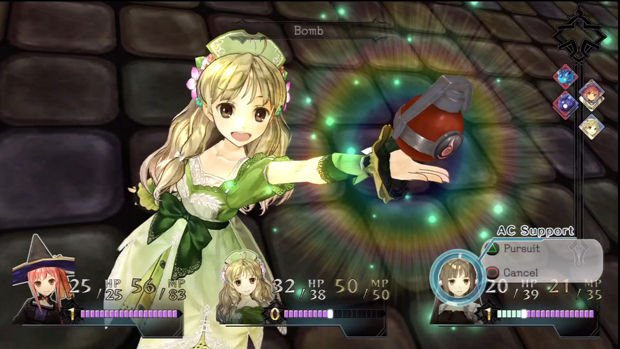 For me personally however, the biggest letdown was the lack of voice-acting in many of the game’s lesser skits. Previous Atelier titles have had me laughing out loud as some of the jokes, though while Ayesha includes that same generic anime wackiness I enjoy (“the warrior lady is trying to cut steak with her buster sword, ha!”), without the voice cast these bits fell completely flat.

In short, Gust definitely seems to be straddling the line with Atelier Ayesha, showing that they have the talent to construct a plot which doesn’t rely on swimsuit competitions, yet aren’t quite ready to dedicate themselves to the taxing demands of a full RPG adventure.

What we’ve left with then is a game without an audience. Fans of traditional RPGs will be turned off by the minimal exploration elements; fans of anime babes in skimpy costumes are unable to get their fix, while fans of generic cutesy anime nonsense really don’t command the buying power to make Atelier Ayesha anything more than a niche title.

Again, I really enjoy these characters, and Atelier Ayesha is definitely a well-polished experience, but it simply lacks the ambition to be a true hit, or worthy of its $50 price tag. So, if you’re a middle school girl currently confronting your blossoming womanhood, or just a fan of overwhelmingly cute things, maybe grab a copy. Otherwise, I heard Tomb Raider is pretty good.