Did you know that Spacewar!, arguably the first video game ever made, had a simulated black hole? Years later Asteroids didn’t even feature anything that advanced but is more widely known.

Astro Duel Deluxe is a multiplayer spiritual successor to those games, in a sense, only it can easily be played on the go with up to six players. So that’s something. 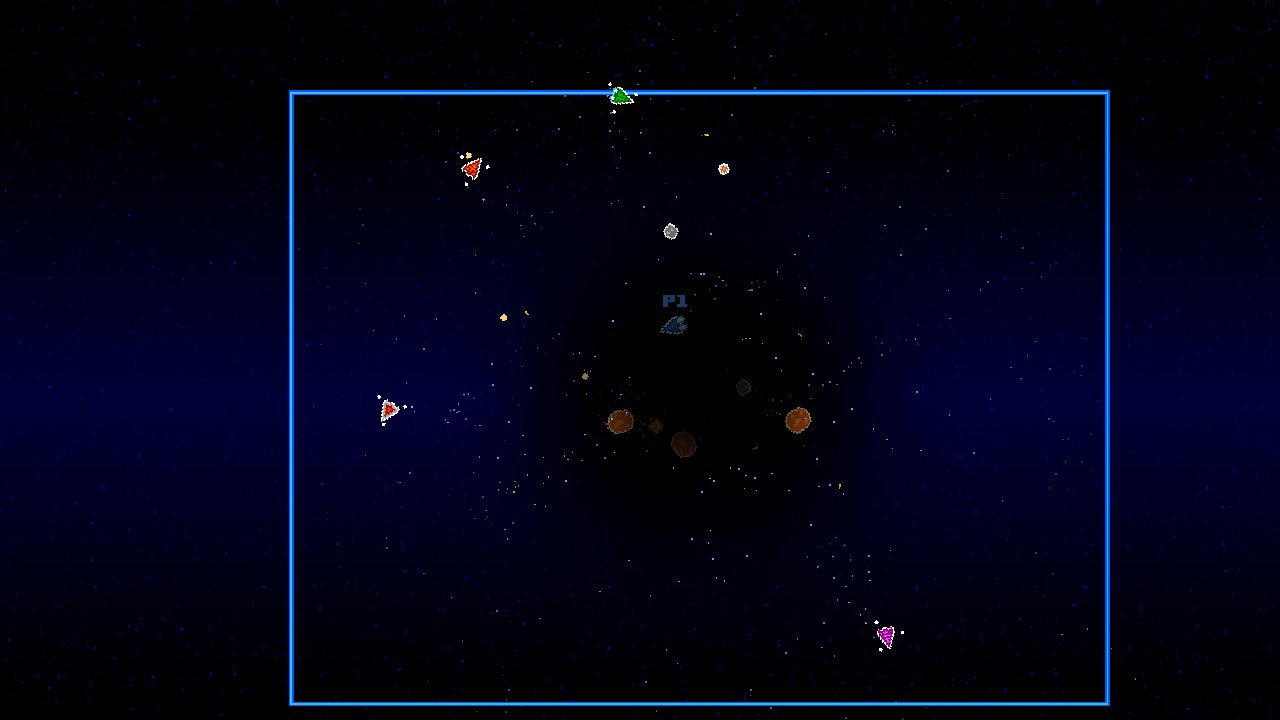 Astro Duel Deluxe is a Switch-exclusive upgraded port of the original game which was only available on PC. This version adds portability, six-player support, and a touchscreen-only mode for up to four players. Otherwise you’re mostly looking at the same game, which is a competitive multiplayer space shooter in the vein of other local-play-only indie hits such as Samurai Gunn and Towerfall. Players can rotate their ships, accelerate, do short boosts, use power weapons, and shoot up to three times in a row; upon ammo depletion, they have to wait a short time for it to restore.

While I appreciate that you can play this with up to six people with various controller configurations offered, the four-player touchscreen mode is rather pointless. Players are each designated a corner of the Switch’s screen where there are two translucent buttons: one that spins them to the right, and the other that shoots. Here, ships constantly accelerate on their own, boosts are performed via double tapping the turn button, and power weapons are automatically used your next shot after picking them up. I guess this mode is useful for those lacking extra controllers, but you’re putting your Switch screen literally in the hands of people that could scratch it, pending your dock hasn’t already done that for you. This isn’t a game I’d be willing to risk it for.

There are two game types available across all the modes, each with a team-based option. Ship Hunters simply has players attempting to destroy each other’s ship with a basic shot or power weapon. Pilot Hunters requires the ship to be destroyed as well as the pilot that ejects and floats through space for a time before summoning a new ship. You’ll find 13 stages to play on, some rather basic, others with obstacles, breakable blocks, or even gravity-warping black holes and other objects. There are also options that can be tweaked before each match including the number of asteroids on the map, whether or not power-ups are offered or if you start with them, and so forth; nothing that exciting.

While the levels and options are varied, having so few of them combined with the simplistic gameplay means you’ll grow tired of Astro Duel Deluxe rather quickly, as I know I did. Playing solo against the CPU just isn’t fun, but competing with a group of six friends on your TV is a blast for the 20 or so minutes before boredom sets in from the repetition and simplicity. I know many Switch owners are thirsty for games, especially ones that offer the ability to play with a lot of friends at once, but I just can’t recommend this one for anyone but the most desperate.

Astro Duel Deluxe is easily the least impressive game visually on the console, does little to nothing to show off your fancy new tech, and it isn’t all that fun for more than half an hour at a time. I will say it has a decent soundtrack — not “$15 for short bursts of gameplay” decent — but pretty good.