Assassin’s Creed IV was a turning point for the series. While a lot of fans were disappointed by the pointless Revelations and the polarizing Assassin’s Creed III, Black Flag delivered everything you could possibly want from Ubisoft, and then some. Fans embarked on quite the adventure with Edward Kenway, and many newcomers even described it as “a pirate game that happens to be Assassin’s Creed.”

Assassin’s Creed Unity doesn’t live up to the new standard set by Black Flag, but it’s a journey worth taking if you’re already into the series, and proves that the franchise is still sustainable. 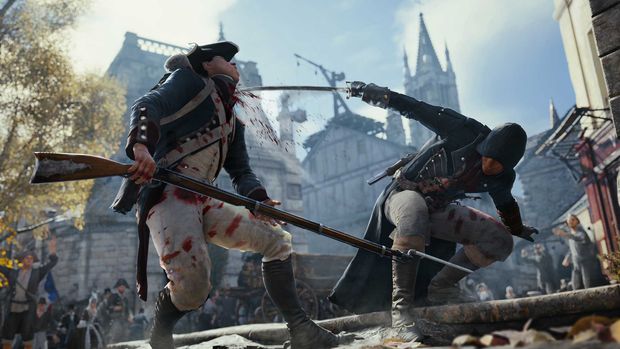 Unity once again adapts entirely to an iconic period in world history: the French Revolution of the 18th century. Without delay you’re reintroduced to the timeless battle of the Templars and Assassins, but this time, the former are on the defensive after a witch hunt from the ruling class. It’s at this tenuous time that you’ll meet Arno Dorian, the hero of the tale. Much like Ezio, Arno’s father is killed right at the start, which leads him to the discovery of a conspiracy involving the two major groups, as well as the awakening of his true power as an assassin.

Although his story and subsequent actions are mostly predictable, I was on board with Arno from the get-go. He’s not quite as memorable as Ezio or as dashing as Edward, but he’s likable, and believable in terms of how the team ties him into the narrative. Ubisoft is clearly getting better at drawing emotional performances out of its subjects, and the current-gen visuals help a lot of the characters come to life like never before — even if what they’re actually doing isn’t all that exciting.

About an hour into the game, you’ll get to the actual revolution, and things kick off nicely. Although Ubisoft once again nails the time period, mirroring events with its own signature faction spin, it doesn’t have as much charm as Black Flag did. Gone are the vast open-sea sections, the memorable sea shanties, and the sense that at every turn, some new bit of buried treasure or fortress may be there for the taking. Paris is a huge playground, though — perhaps one of the biggest single-setting areas so far in the series. As long as you don’t mind that many areas look similar to one another (there’s not enough district variation as in other Assassin’s Creed games), there’s quite a bit of ground to cover here.

The modern half of the story — or should I say, the modern fraction — is a lot less prevalent this time around. At the start you’re billed as yet another employee of Abstergo Entertainment, the modern-day incarnation of the Templar order, and every three to four hours you’ll be contacted by Desmond’s crew for a quick briefing on what’s going on in the current age as you’re recruited into the Assassin order. It’s basically more “Templars are bad, mmkay” dialog, and you’ll quickly be ported back into Arno’s tale after the short expositions.

In fact, everything outside of the 18th-century Arno core is streamlined. There are only three bits of gameplay where you aren’t exploring the revolution, which deal with three specific periods in time throughout France’s history: the 1800s, Nazi-occupied Paris, and the Middle Ages. These sections are, for a lack of a better word, unified (and roughly 15 minutes long each), and for those of you who aren’t fans of the overarching modern-day story, you’ll be pleased to know that it’s almost non-existent. If you dig it, you may want to look elsewhere to get your fix. I’m not a huge fan of the modern stuff, but I could have stood for a little more of it, much in the vein of Black Flag.

Gameplay is relatively the same, with the completely new addition to free run “up or down” by holding the run trigger and a specific button. It’s mostly the same as before with a couple of extra button taps to get used to, but the movement system thankfully prevents more accidents than in previous games; you’ll rarely jump off cliffs to your doom now because you accidentally jimmied a direction in a way your character didn’t like. The animations are also smoother, and I specifically noticed a lot more variation with Arno’s parkouring like extra spin moves and tumbles, which were a neat surprise.

Unity also adds a more RPG-like element to the game — the ability to “level up” by doing more missions, gaining new powers in the process. These are things like more health, better lockpicking skills, abilities like restoring your ammo at will, and gaining new close-combat moves. I like this addition since it allows you to build your character the way you want from the start without getting into the minutiae of skill points or anything in-depth. You earn points by doing random actions out in the wild, which encourages you to start tussles and actively level-up.

In terms of gear, everything is more streamlined this time around, and you won’t be fumbling around gigantic menus to access different variations of smoke bombs. Instead, Ubisoft kept things simple with a few flashy pieces of gear, a sidearm, and the new Phantom Blade — which is a fancy way of saying “powerful projectile” — that can be used for long-range assassinations. Like the story, it’s not elaborate or new, but it gets the job done and there’s enough tools to have fun in multiple situations. 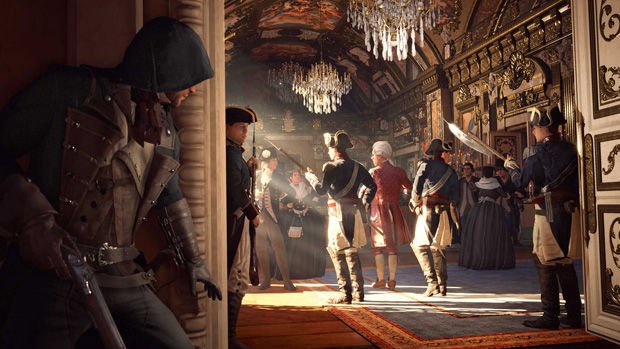 Even better, you can fully customize Arno by purchasing new clothes, uniforms, and weapons all from a simple menu. It’s a welcome addition, especially since you can switch up Arno’s threads right from the start, changing his new blue look to the iconic white setup. There’s over 100 different outfit combinations, including classic costumes with a few unlock requirements.

The biggest upgrade in Unity has to be the bigger crowds as a result of the current-gen push, and it’s noticeable from the start. It’s unreal to see a couple hundred citizens rage in what feels like a real revolution, and it feels like a real struggle at points, which is unique to Unity. The draw distance is also greatly improved. You can see the Parisian countryside in the background at nearly all times. Indoor settings are also a sight to behold, as my jaw actually dropped after seeing the interior of the Notre-Dame Cathedral for the first time.

Unfortunately, Ubisoft seems to have had some issues adapting the series to current-gen systems; I encountered a number of nasty glitches on the Xbox One. For starters, the most common ones were constantly repeating dialog during key story parts, issues with the close-combat animations, some freezing while climbing tall structures, and falling through the floor during the start of certain missions. Since Unity offers checkpoints constantly it wasn’t really a game-breaking affair, but I encountered at least one small glitch every two missions or so. Enough for the technical issues to get annoying.

The actual mission types don’t stray too far from the classic formula, but there are occasionally more open-ended events that are less structured. I wouldn’t say they’re necessarily “organic” as described by the developer, since they just add a few optional objectives that make the mission slightly easier, but they’re a nice way to jazz up assassination missions, as they make you think of ways to solve a problem other than “get to the target and kill him.” 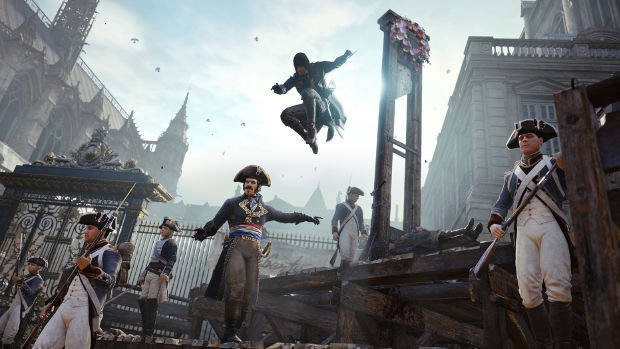 If you’re a completionist, you’ll enjoy the murder mystery optional missions, which allow you to gather evidence and accuse citizens of a crime, netting a “first try” bonus if you get it right. The crowds are also more dynamic this time around; there are thieves to tackle and criminals to stop randomly throughout the town, signified by miniature missions that can just pop up on your map. It’s not a new idea, but it’s nice to see something happen out in the world that helps those mesmerizing crowds seem more life-like. There’s also “Paris Stories” to complete (involving iconic figures in French history), the aforementioned three extra time periods to explore in the form of additional obstacle courses, and of course, funny database entries by Shaun the Assassin.

Multiplayer this time around is stripped down in favor of a streamlined co-op experience. There’s no competitive element in Unity, no second disc to insert or menu option to select — it’s all built into the campaign in one giant mode. It’s the same world as the core story, but with certain missions you can use matchmaking or partner up with three friends to tackle them as a team.

It’s inoffensive at its worst, as there are some exclusive co-op missions you can play that can’t be done solo, and it all fits nicely into Unity without feeling forced. I’m fine with the removal of the competitive gametype, because almost every single game since Brotherhood has included it. It’s time to try something different, and although co-op didn’t set my world on fire, it does have potential that can be better realized down the line.

My lack of enthusiasm for the multiplayer is mirrored by my experience with the rest of the game. Unity does take a few extra strides towards advancing the series, but in many ways it feels like a step back from Black Flag. It was fun to roam around Paris looking for trouble and ogle at the power of current-gen consoles, but the game lacks that grand sense of roaming the uncharted seas in Assassin’s Creed IV, or even the open-ended feel of the wilderness in Assassin’s Creed III. In other words, it struggles to make its own mark on the franchise outside of the new French Revolution setting. 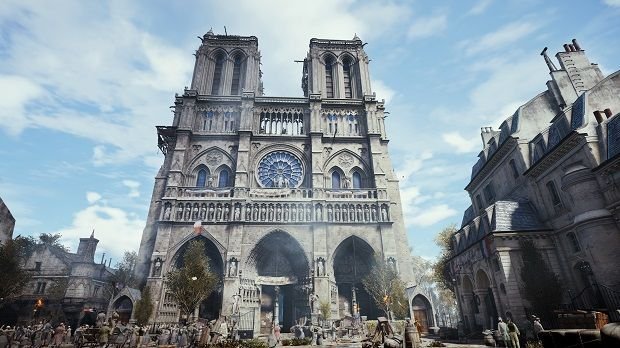 If Ubisoft fixes the glitches, Assassin’s Creed: Unity will be a much stronger game, even if the ceiling is a bit lower in general. Unity‘s potential is not as strong as some of the better entries in the series, but it’s good enough for existing fans to continue the journey.