At long last, the highly hyped expansion for Assassin’s Creed III is here, and it’s split into three parts.

The first portion, called “The Infamy” sets up an alternate reality scenario where George Washington, now “King Washington” morphs into basically a villain of comic book proportions, and hunts down Connor and his people just like the Templars did in the core story.

To help against this new menace, Connor will gain access to the Spirit of the Wolf, which allows him to (almost comically) call forth wolf familiars and cloak himself like the Predator.

As you can tell, this has the potential to go horribly wrong. 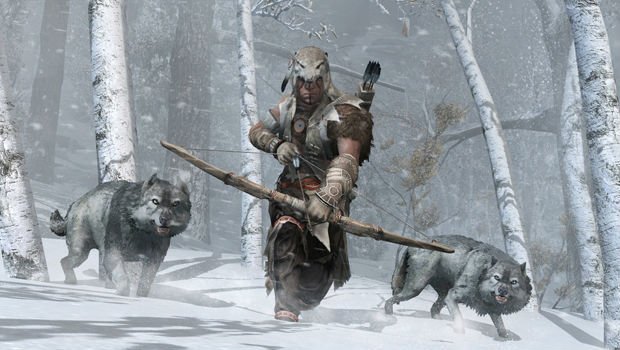 Minor spoilers involved for Assassin’s Creed III, so don’t read if you haven’t finished the game.

First things first, this DLC is accessed from a separate portion of the main menu — meaning, it doesn’t tie into your original save file, or carry anything over to it. This isn’t a deal-breaker for me per se, but it causes some issues that I’ll get into later.

Not content with a slow draw, The Infamy opens up with a bang. Connor experiences a dream sequence of sorts, and sees his mother — who actually died very early on into Assassin’s Creed III. Connor’s mother uncovers that “General” Washington actually  has no intention of honoring his alliance to Connor’s people, and is currently setting fire to a nearby village. Naturally, the Mother and Son duo spring into action, and start setting things right.

The story missions themselves are highly reminiscent of the core Assassin’s Creed experience, and outside of a few that specifically utilize Connor’s newfound DLC powers, there really are no surprises here, nor are there disappointments. For a few quests, the “instant-fail” mechanic is still in place, which can be pretty annoying. But for the most part, I really didn’t have any trouble, and completed every mission on my first, and at maximum, second try.

Meeting King Washington for the first time is sufficiently harrowing, especially if you witnessed his tenderness in the campaign recently. I enjoyed this comic book villain style approach, and even though he’s only on-screen for a small portion of The Infamy, his appearance was enjoyable, and I’m excited to see more. 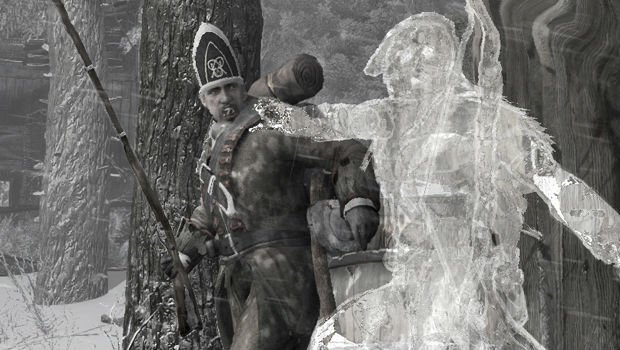 Calling this an “alternate reality” actually isn’t entirely accurate, as Ubisoft has stated that somehow, this plays into the canonical story of Assassin’s Creed III proper. Whether it’s what “really happened” (doubtful) or if it’s just a crazy peyote-fueled trip by Connor, we’ll find out by the time the third portion ends. For now, we’ll just have to stick with what we know.

This DLC takes place entirely within the confines of the frontier, an area that AC III fans will no doubt be tired of by now (as they explored it endlessly already). To placate people who may be bored of the setting, more details added have been added, such as extra death and destruction strewn about the countryside — including hanging corpses, and piles of bloody bodies across the icy landscape.

As previously mentioned the main change in gameplay is the power of the wolf. Utilizing the ancient powers of one badass cup of tea, Connor will be able to summon a pack of three wolves to chow down on enemies, and cloak himself at will (using his health as “MP” essentially). Using the cloaking power is pretty fun at first. Basically, as long as an enemy doesn’t bump into you, or you have a solid amount of health, you can stay cloaked. What this means is that you can stealth kill enemies right in front of other people and remain a deadly shadowy visage so long as you can pay the MP for it.

This leads to a ton of cool stealth puzzle opportunities that force you to figure out what the best course of action is in terms of moving between hidden bushes and buildings, using the cloak to fill in the blanks. 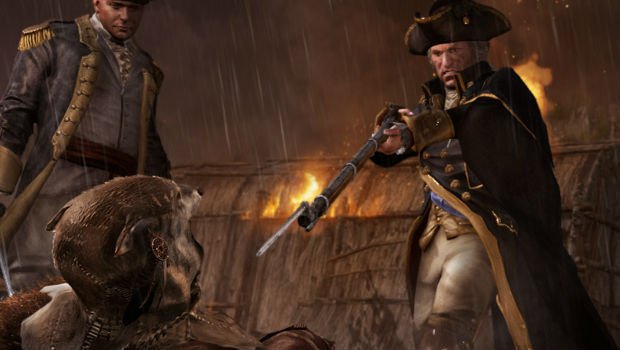 While it’s a powerful gimmick on paper, the Wolf cloak doesn’t have enough staying power to really last you past the initial excitement of using it, nor is there a sufficient playground to utilize it in within the confines of this DLC. Ubisoft should have gone the extra mile and embraced the silliness of it, and perhaps added a new power, or allowed players to bring over the cloaking ability to the main game in some capacity. That way, this DLC would have legs beyond the fleeting campaign.

Speaking of fleeting, part one of the DLC will only last you around two to three hours, even if you opt to grab all of the treasures and hidden memory fragments (the latter of which unlocks additional story across all three episodes). There are a few side-missions, but they’re not as involved as some of the ones in the main campaign.

All in all, The Tyranny of King Washington: The Infamy is a little bit too dependent on the assumed purchase of the other two packs. With a cliffhanger ending, and memory fragments to collect across multiple episodes, it’s clear that it will be much more poignant as a complete story.

For now though, you’re left with the decision to purchase just one, so you’re better off seeing how the other two turn out first.