Just last week I asked readers if they were into the idea of 2D Assassin’s Creed games. Roughly 41% were on board, 33% preferred the 3D iterations, and 26% have checked out of the series entirely.

Ubisoft doesn’t really care what you think, though. As long as they sell, those assassins will keep on stabbin’. 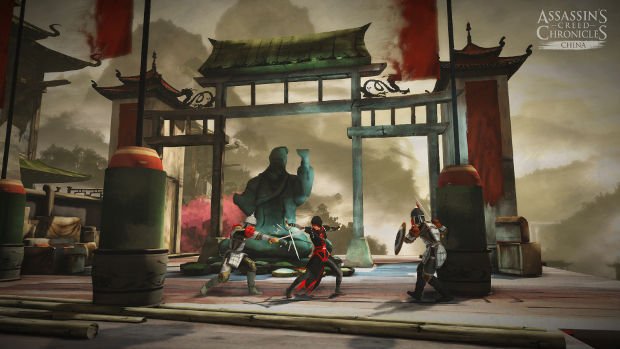 Assassin’s Creed Chronicles: China isn’t a new concept, as Assassin’s Creed II: Discovery basically built upon the older Prince of Persia games, which Ubisoft even took a crack at last generation with a remaster. Nonetheless it’s a welcome one on paper if we get to see other parts of the world beyond western civilizations, even if it does feel rushed in many aspects.

The story this time around follows Shao Jun, one of the lone assassins left in her order after Zhang Yong of the Tigers (Templars) wiped them out. It takes place after the events of Assassin’s Creed: Embers, which ties her into the core storyline by way of a chance encounter with Ezio Auditore. Fans will enjoy the connection for sure, but most of you out there can completely ignore it as yet another wacky “Assassins versus Templars” adventure and just enjoy this as a 2D platformer.

You might want to ignore the story anyway, because it’s not very good. Framed as a standard revenge tale, Shao Jun will hobble across various landscapes killing whoever gets in her way to the top. The dialog is particularly terrible and not in a funny B-movie way, and no one that turns up is memorable. I know a lot of people didn’t dig the meta-narrative fluff in the core series, but at least it was something worth talking about. In many ways it feels like a missed opportunity to flesh out the brotherhood in China, but hot damn if the setting itself isn’t beautiful.

In fact, the first thing I noticed about the game was the killer art style. The lazy slideshow cutscenes aren’t that big of a deal when everything looks like a living painting, especially Shao’s flowing red cape. In-game the art is still wonderful, but the environments themselves often lack detail, with washed-out backgrounds making a frequent appearance. That feeling of disappointment will pass quickly though once you reach another vibrant setpiece.

Fans of the core series will find it easy to acclimate, as the controls are very similar. There’s a button to hold down to run and initiate reckless mode, a button to go all stealthy, and your standard light and heavy attacks. While the narrative isn’t all that slick, Shao Jun controls like a master assassin, and I had very few issues getting her to go anywhere I needed her to be. Grabbing ledges, crawling about, and avoiding guards was a breeze.

All of this action will be navigated around awareness cones for enemies, which are visible front and center on-screen. Enemies are fairly observant of their surroundings, with clear “sound” circles and other nuances influencing their movements, but sadly they don’t follow you to the ends of the earth like past games — if you’re in a tricky spot, they’ll just sit there for about 10 seconds before returning to their patrol route. It reminds me of the camp of the original Tenchu, with mixed results. 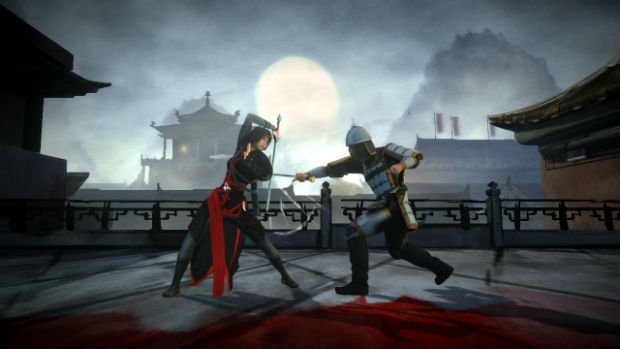 Non-lethal force is preferred, but Shao has access to a whistle ability for distractions, in addition to firecrackers, daggers, and a noisemaker tool. Every power feels roughly the same which makes for some dull variations early on, but every level will unlock newer, cooler abilities that mix things up much more than her basic skillset. I’m talking grappling hooks, more options for hiding places (like that “quick switch” leap Sam Fischer is so good at), and sliding assassinations.

Melee combat is run-of-the-mill but it looks sexy, especially when coupled with Shao’s unique animations. Backwards blocks and bullet dodges are fluid and responsive, which is key as you’ll be doing both of those things a lot. You won’t fight many interesting enemies, but even the meat grinder of foes the game throws at you is fun with this system. Once you’re done with the five-to-six-hour adventure there’s two New Game+ options to replay with slightly different mechanics, which do just enough to justify another playthrough or two.

Assassin’s Creed Chronicles: China has the makings of a good 2D Prince of Persia re-awakening, but it lacks a lot of character both aesthetically and mechanically. Still, there’s very little actually wrong with it if you’re looking for another platformer to add to your pile. Hopefully future iterations of the Chronicles subseries can build upon the foundation that China has provided.