Let’s deal with the elephant in the room right now: Assassin’s Creed: Brotherhood isn’t a quick cash-in on last year’s massively successful and (mostly) critically-acclaimed sequel. It’s not a full-blown sequel, either; this isn’t Assassin’s Creed 3. Instead, it acts more as an epilogue to the story told in Assassin’s Creed II.

What Brotherhood is, however, is a deep and rich game experience that builds on the strengths of its predecessor. And here’s the kicker, and allow me to completely blow your mind: Brotherhood is, in almost all ways, a better game. 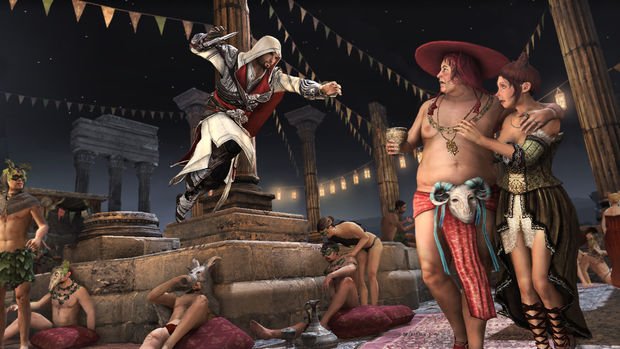 As far as the core mechanics are concerned, Brotherhood sticks to the formula of the previous titles, with the player once again taking on the role of Assassin’s Creed II’s lead, Ezio Auditore. It’s all about the open-world exploration of the game’s breathtaking translation of 15th-century Rome, scaling the city’s massive structures with smooth and fast parkour-style movements. In Brotherhood, silent assassinations are still encouraged, but with an enhanced fighting system, direct confrontation is more viable than ever.

There’s a new kick, for instance, that can be used aggressively to break a tough enemy’s defense. Other additions to combat include a hidden pistol and some satisfying chained assassinations. The latter sees Ezio dispatching enemy after enemy in quick and brutal succession, making the player feel like an indomitable badass. Even with a heavy focus on direct combat, Brotherhood doesn’t play like Bayonetta or God of War. Instead, it’s a rhythmic experience, with surprising variations in animations that always lead to a satisfying conclusion.

Brotherhood gets its namesake from another new element found in the game, the ability to recruit novice assassins from among the citizens of Rome. Once they’re brought into the fold, a meta-game opens up that will have you sending them on tasks all across Europe, either alone or in groups. As missions are successfully accomplished, the assassins earn experience points and can then be leveled up, allowing them to attend to even more difficult engagements. This is all a text-based affair, simple in its execution, but it’s easy to get wrapped up in building your brotherhood and watching it grow. 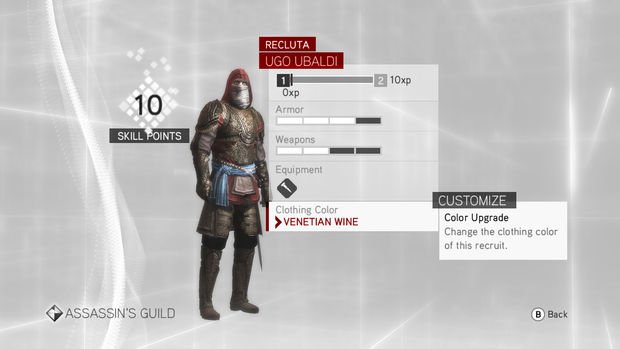 While it’s certainly a nice diversion to build up a fellowship of clandestine murderers, the real satisfaction comes from calling on them in the game world to perform assassinations or help you in battle. With a simple button press, you can summon your brothers (and sisters) to assassinate targets right before your eyes. As empowering as it is to quietly sneak up on a guard and take him out, sight unseen, there’s something even more fulfilling about watching your minions descend (seemingly from nowhere) upon a target at your command, doing your dirty work for you. In one instance, I sent a few after a group of three guards — two assassins jumped down from a rooftop to pummel two guards while another leaped out of a mound of hay to briskly sever the jugular of the third. Assassins can also be killed in battle, and since they can be leveled up, customized visually, and even have names, losing one can sometimes be an emotional affair. I still am mourning the death of my very first protégé, Nico…

While most of the open-world portion of the game will have you confined to the city of Rome, don’t sweat the fact that it’s only a single area. The capital city is massive and has multiple districts, each with its own feel and vibe. There’s plenty to do and see — even outside the game’s “sequence” missions, which move the narrative forward — certainly more than in either Assassin’s Creed or its sequel, which makes the quick follow-up that is Brotherhood even more impressive.

Detailing all of the side-quests and optional missions would take forever, but suffice it to say they’re even more diverse and creative than those found in previous games, some even having their own instanced areas and scenarios that simply must be sought out and seen. Playing the game for review was extraordinarily difficult, and with only a finite number of hours to make it to the game’s conclusion, I was constantly distracted and drawn to every single side activity. Whether it’s the incredible Leonardo da Vinci sequences, where you work to destroy war machines and blueprints, or an underground hand-to-hand fight club, the activities are staggering in their diversity and breadth. 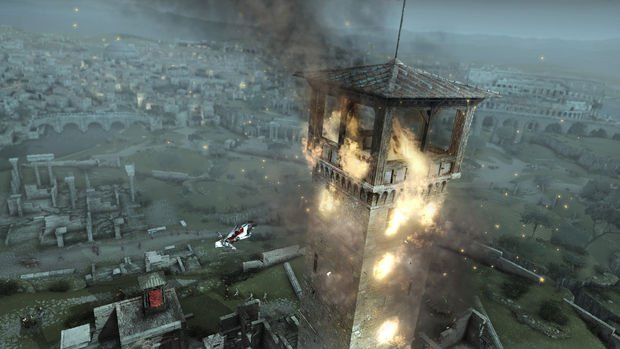 As in Brotherhood’s predecessors, you’re not limited to exploring 15th-century Rome: a few game sections take place outside of the memories relived within the genetic-memory-exploring Animus. It’s in these sequences that you’ll once more play as Desmond, interacting with other members of the modern-day assassin’s order such as Lucy, voiced again by Veronica Mars actress Kristin Bell.

The difference is that in Brotherhood, except for a few forced segments, you can hop in and out of the Animus at any time by pressing Start and then exiting the simulation. While it’s nice to have that freedom this time around, I did find that it worked against the favor of the story. Exploring outside the Animus can yield some secrets, but the interaction with the other characters seemed mostly inconsequential. While the modern sequences in previous games had weight — they moved along the story in a crucial way, and you looked forward to the each one — that’s just not the case here, and it’s a little disappointing.

That brings me to what’s arguably the weakest part of Brotherhood, steeped in an otherwise outstanding game — its story. Taken by itself, it’s not terrible, but this is probably not the narrative follow-up that fans wanted trailing the mystifying finale of Assassin’s Creed II. Revisiting the tale of Ezio works fine as an epilogue to that game, and the tale of the assassin brotherhood working to reclaim Rome from the demented Borgia family is adequately compelling. Still, the overall narrative doesn’t really hold as much gravity as previous titles. There’s certainly not very much explained or even revealed about the overarching assassin/Templar chronicle, outside of the game’s final hours. Fans should also brace themselves for the game’s conclusion, which makes Assassin’s Creed II’s head-scratching finish seem like a neatly-wrapped sitcom finale in comparison. 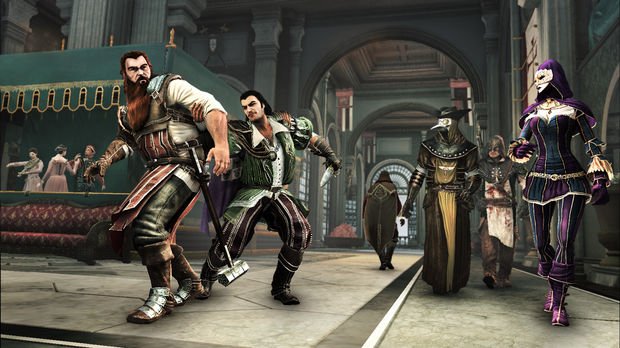 Given the quality and scope of Brotherhood’s single-player experience, it’s already a must-buy. But I’ve yet to even touch on the game’s most radical addition to the series: online multiplayer.

The multiplayer mode is broken up into four gametypes — “Wanted” (a free-for-all mode), an advanced version of “Wanted,” “Alliance” (two-player team cooperative play), and another team-based mode, “Man Hunt.” What each mode boils down to is hunt and simultaneously be hunted, with the game assigning targets simply by providing players with an image of said mark.

Ten character skins are available from the get-go, each with its own set of animations, but functionally identical in every other way. The game then populates the title’s eight maps (with four more unlockable as the community reaches certain milestones) with the skins chosen by the players. So what you get is a city filled with many citizens going about their business, some of whom look like your potential victim. As you can imagine, the difficulty of finding your target is exacerbated by this fact. Worse yet is that finding and killing a computer-controlled citizen leads to a loss of points. 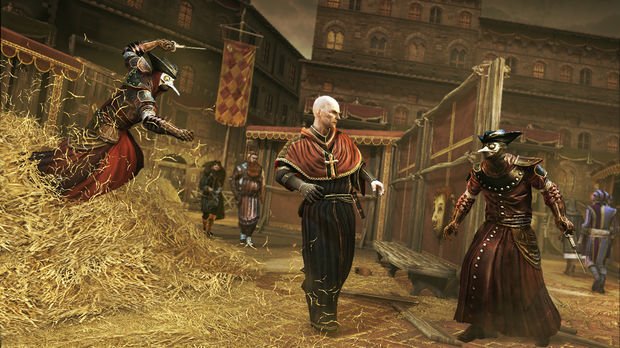 It’s these details that make Brotherhood’s multiplayer a psychological game like nothing else really seen on consoles. You’re given a compass of sorts that will direct you to the general area of where your prey is, but the game never really holds your hand and identifies it for you. The key is recognizing certain behaviors that are unique to human players. You’ll never see a computer-controlled citizen scale a building, nor will one just take off running. See someone making jerky movements in a crowd? That could be your victim.

On the flip side, knowing you’re also being hunted is a persistent source of stress, and you’ll be adapting your behavior accordingly to “blend in” with crowds and outwit your pursuer. If you’re spotted, however, be prepared to flee — it’s not uncommon for fast-paced chases to break out, with two players (or sometimes more) pursuing each other through alleys and across the rooftops of structures.

While all of the character skins are on an even level to start, players can also advance through 50 levels of progression as they earn experience points by winning matches and meeting certain conditions. At fixed levels, abilities and passive perks are awarded, which can drastically change the way you play and apply tactics. Each of the game’s 12 abilities — like the ability to morph your character skin into another to deceive potential assassins, or being able to throw down firecrackers to cause chaos or weed out prey — can be leveled up as well. 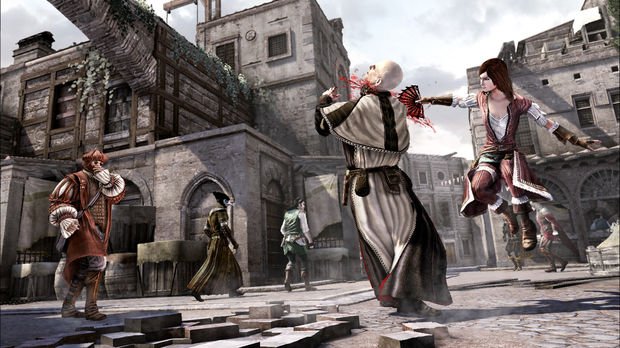 According to Ubisoft, there’s 40 hours of play here before the “average” gamer reaches their maximum potential level. While there was certainly not enough time for me to work through all 50 levels myself, I did spend time playing on both ends of the spectrum — once on a private account Ubisoft had leveled up to 50 for me, and another on retail servers starting from scratch. Having abilities at your disposal certainly seems to give you a slight advantage, too. Hopping on a retail game server a day before launch, my level-one player already had to contend with opponents who had reached level 20. Having a player toss a smoke bomb in my face to get me off their tail was a bit frustrating, considering it was a tool I was numerous levels away from having in my arsenal. It wasn’t so overwhelming that I wanted to rage-quit, but it’ll be interesting to see how it shakes out once players worldwide start digging in.

As a deviation from the hours of single-player content, the multiplayer is successful in offering a unique and fun set of experiences that aren’t really like anything else out there. No, there isn’t a threat of it replacing Call of Duty: Black Ops as the go-to online game this winter, but Brotherhood’s multiplayer mode provides a fresh, fun take on competitive multiplayer that rewards a player’s perception as much as his or her twitch-based gaming skills.

It’s a bit disappointing, however, that you’re so limited in terms of the number of players — you must have a minimum of six for all modes, and the most you’ll have in one game is eight. It’s entirely possible that any more or any fewer players would completely break the dynamic, but in a world where double-digits is the norm, eight may seem like a meager amount to some. 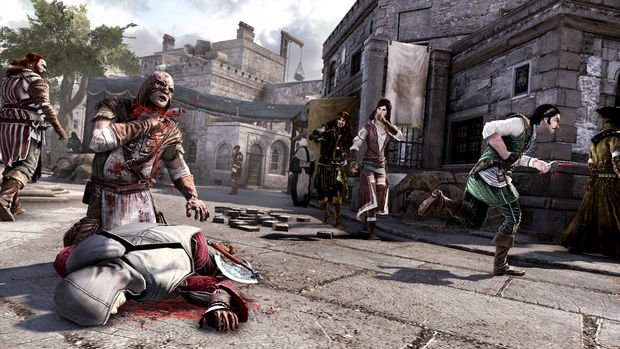 For those folks who didn’t enjoy Ubisoft’s previous sequel (hey, I think I know a guy!), Brotherhood has nothing to offer — outside of its incomparable multiplayer, perhaps — that will change their minds. This isn’t a game that repairs “problems” or departs radically from a formula. It is, however, a game that improves on just about every facet, and dumps a ton of content on the player to boot.

It seemed to be an impossible task for Ubisoft to turn around a year after the release of Assassin’s Creed II and deliver such a polished follow-up to a game that many critics were calling one of 2009’s best titles. Yet, against all odds, Assassin’s Creed: Brotherhood exists in 2010, and it not only lives up to the hype, but it manages to completely outclass its predecessor. Brotherhood is a game that Assassin’s Creed fans simply cannot afford to miss, and one of best games this year.