I’ve never understood math. I was terrible at it in school – I had to take remedial summer math classes before I could be admitted into my high school – and ever since I’ve either shied away from any pastime involving calculation, or when it couldn’t be avoided, quickly reached for the nearest available cheat sheet.

Playing Anno 1800 – my first experience with the now twenty-year-old city-building franchise – leaves me with the impression that “this must be what it’s like for people who like math.” 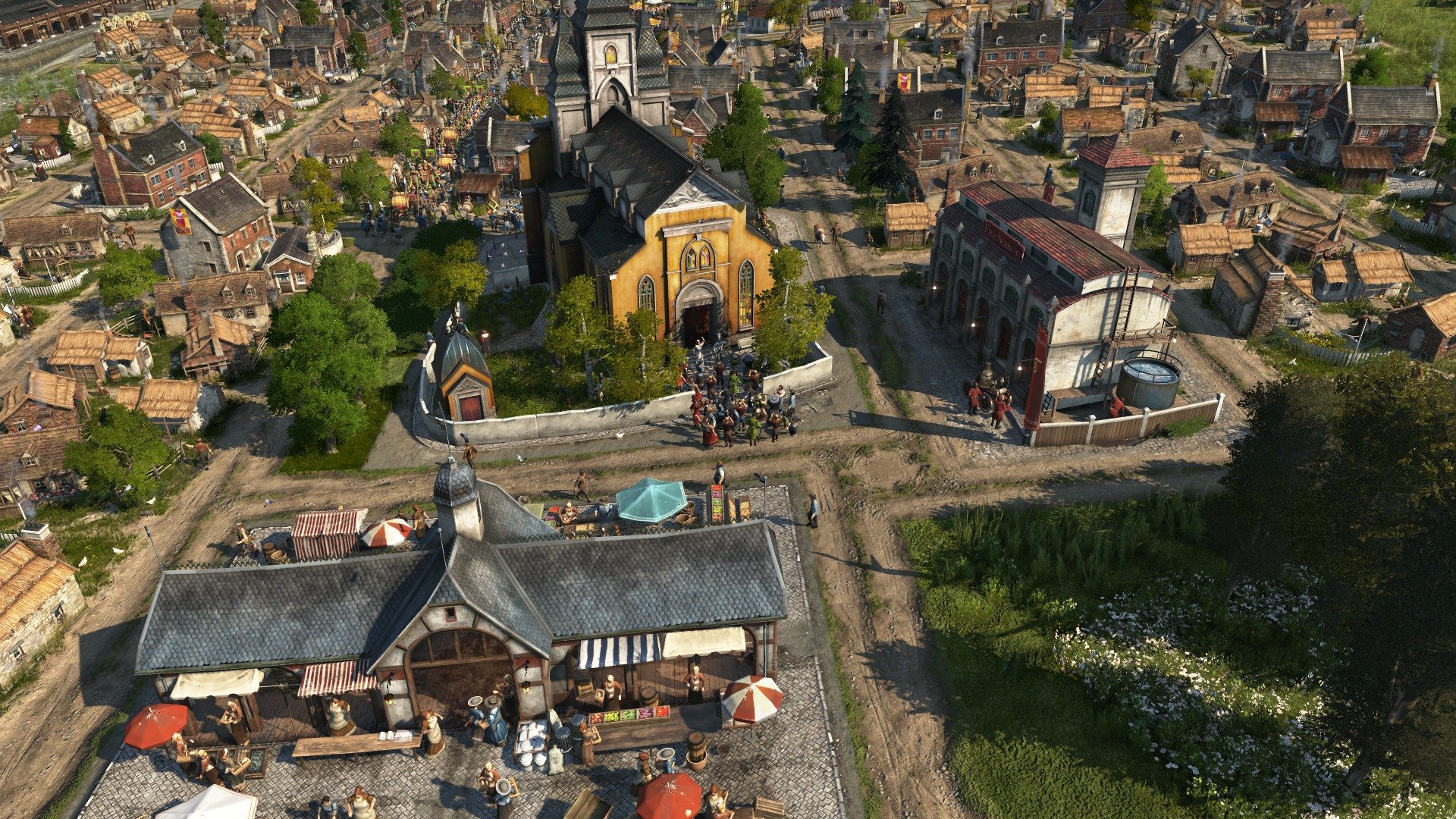 Mind, when I say that, I don’t mean that Anno 1800 is particularly heavy on manual calculation, though you could really get into the weeds with that stuff if you feel like it. I mean that, unlike many games of its type, where I’m content to just blunder through and let things lie as they will, I want to optimize my Anno 1800 settlement. I want to find the perfect geometric arrangement for a series of lumberjack huts in my island’s forest, so that they can be served by just one timber-processing plant. I want to make sure my schnapps distilleries, weapons factories, windowpane manufacturers, and residences have just the right amount of coverage from the local fire station that they don’t go up in smoke the next time someone drops a lantern. I want to kaizen the shit out of my little colonial outpost, make the queen proud, and rake in a ton of money. And if it takes me the whole weekend or a few riots from the proles to do it, that’s just what it takes, right?

Anno 1800, more baldly than a SimCity or Civilization, channels the joys of optimization, the same engaging feeling you might get conducting a productive time-and-motion study at work, or when you finally understand that Six Sigma Yellow Belt junk you took at work just to make it look like you cared about being promoted.

It does this against a frankly gorgeous aesthetic backdrop of quaint 19th-century industrial-age architecture. Be it in the guided tutorial/narrative campaign mode, or starting fresh in a new session, players will build residences for their laborers, meeting their needs by building production infrastructure. But each product demanded requires an entire series of buildings and infrastructure to create it.

For example, one basic demand that a tier-one Farmer has is for clothing. To create that, players need to build a sheep farm, which generates wool. Then the wool will need to be processed by a Frame Weaver into clothing. A luxury item, like schnapps, demands a potato farm, and a distillery. These and more all demand storehouses to hold the goods, roads to connect them, and layer upon layer of infrastructure. Viewed from the perspective of an educational tool, Anno 1800 is remarkably good at impressing upon oneself the sheer complexity of modern manufacturing and logistics. If even this simplistic rendition of the modern production chain can be this complicated, it boggles the mind to imagine what went into building something actually complex, like the computer I’m typing this review on. 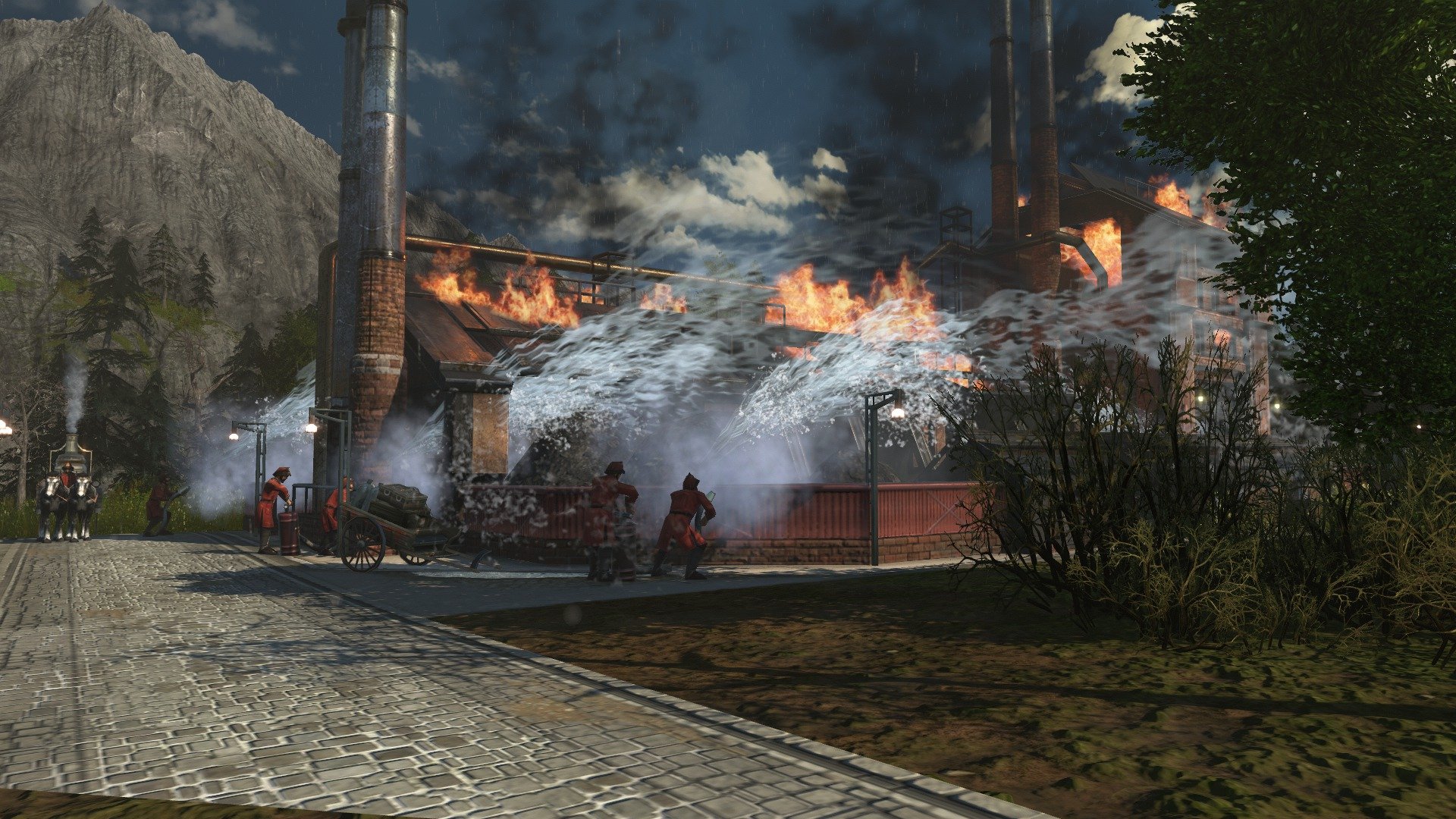 Things get even wilder once you expand out past your initial settlement. Variations in soil fertility and available resources will ensure that most players won’t be able to build everything they can without expanding outward to other islands – islands that may be occupied by other players or factions. To that end, players can settle unoccupied islands, trade for what they need, buy shares in occupied territories with a bit of diplomacy, assemble happy economic coalitions or even organize a hostile takeover. And when all else fails, there’s always war, though the combat is pretty simplistic and not at all interesting. If anything, having to make a fight of it feels like a failure in Anno 1800.

And then there’s the New World. One can’t have a colonial game set in 1800 without actually having colonies, so the Latin American-inspired environs of the New World are it. Settlements in the New World are established and maintained much like they are in the Old World, though colonies have their own unique production chains, aesthetic style, architecture, and worker tiers, all with unique needs. Eventually, colonies can supply the homeland, and vice-versa, with exclusive products, like rum, furs, and advanced machinery.

One of the unique things about Anno 1800 is that every tier of population proves necessary to the health of a settlement. Each tier of laborers (for example, the Old World’s Farmers, Workers, Artisans, Engineers, and Investors) can only be used to populate specific categories of building, so maintaining a balance of every type of laborer is paramount. But with the addition of considerations like tourism and “attractiveness,” players working at scale may end up specializing their production over several islands, in order to keep things efficient (and keep at least some territories from getting polluted by heavy industry).

Outside these core mechanics, other considerations pop up. NPCs generate mini-quests to undertake, usually simple combat or fetch missions, in return for infusions of cash or resources. Expeditions can be sent out using ships. These return brief choose-your-own-adventure-style story vignettes, with outcomes that are influenced by the quality of the expedition’s equipment and crew, generating rewards like unique gear, or interesting finds for the settlement’s Museum or Zoo buildings. 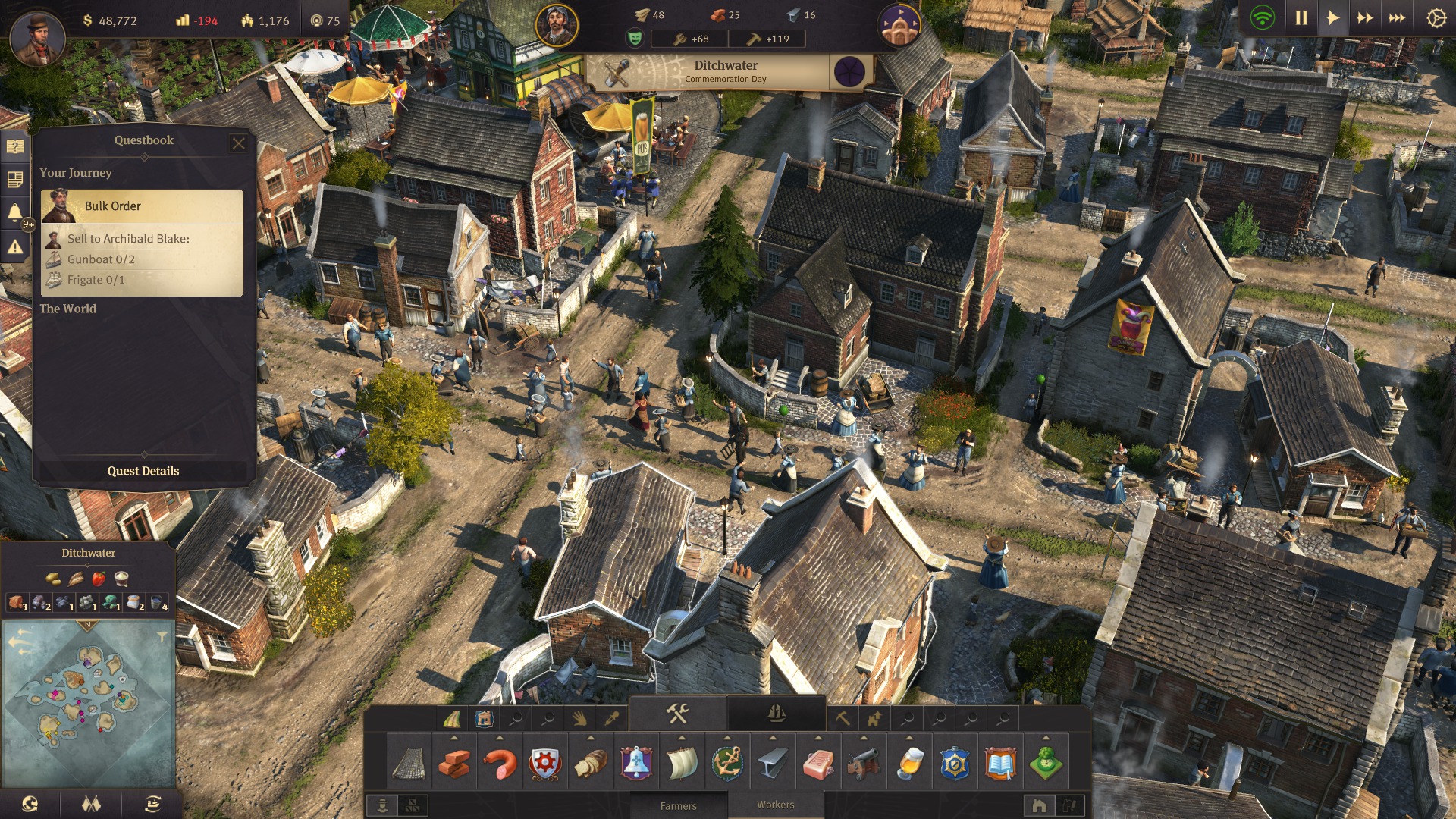 Perhaps it’s a bit presumptuous of me to say this, being an Anno neophyte, but Anno 1800 feels structurally like an exemplary version of the type of game every Anno wants to be: A joyful celebration of the perfect logistics chain, expressed as an idealized little city-state whirring along in clockwork heaven.

Oddly enough, where I feel it falls shortest isn’t in the “Anno” part of the title so much as the “1800” part. As one astute commenter pointed out in my Review in Progress, the 1800s carried a lot of historical baggage, to understate things quite horribly. For all we talk about how it was the core of advancement for much of modern society, that same advancement was built on the back of vicious, violent exploitation, be it through institutions like slavery or the whole enterprise of western colonization and imperialism itself. For better and worse, Anno 1800 opts to tackle basically none of that, presenting an idealized, sanitized version of labor relations of that era. About the closest it comes, mechanically, to some sort of accountancy is the decoupling of a population’s happiness from its productivity. You can grow and upgrade a population so long as its basic needs are met, at the cost of their happiness (if their luxury needs aren’t addressed). Lowered happiness increases the risk of riots and sabotage, which can be countered with special equipment, and buildings like police stations.

Beyond that, Anno 1800‘s whole representation of labor feels oddly out-of-sync with its historical inspiration. For example, the game has few penalties for maintaining an idle surplus of labor. You can build a vast excess of housing, having hundreds or even thousands of workers of various categories just standing idle, and so long as their needs are met by the production facilities on hand, this will have no real impact on happiness or stability. In fact, as long as you can keep needs met while keeping the maintenance costs from sending your earnings into the red, building up a vast surplus of magical, tax-paying unemployed people is a surprisingly viable early-game moneymaking strategy.

That said, I can’t entirely lay the blame at Anno 1800‘s feet alone. Issues like that are the very definition of a cultural minefield, after all. “Failing to grapple critically with the legacy of colonialism” is a shortcoming very common among games in this genre, and perhaps in most popular culture, to boot. It would be unfair to expect Anno, a game that has never shown a desire for historical accuracy or realism (no one even mentions what country these people are supposed to be from!) to be the one to push that conversation forward, though its conscious omission leaves it feeling a little incomplete, the same way a historical, kid-friendly theme park might appear to a cynical adult. 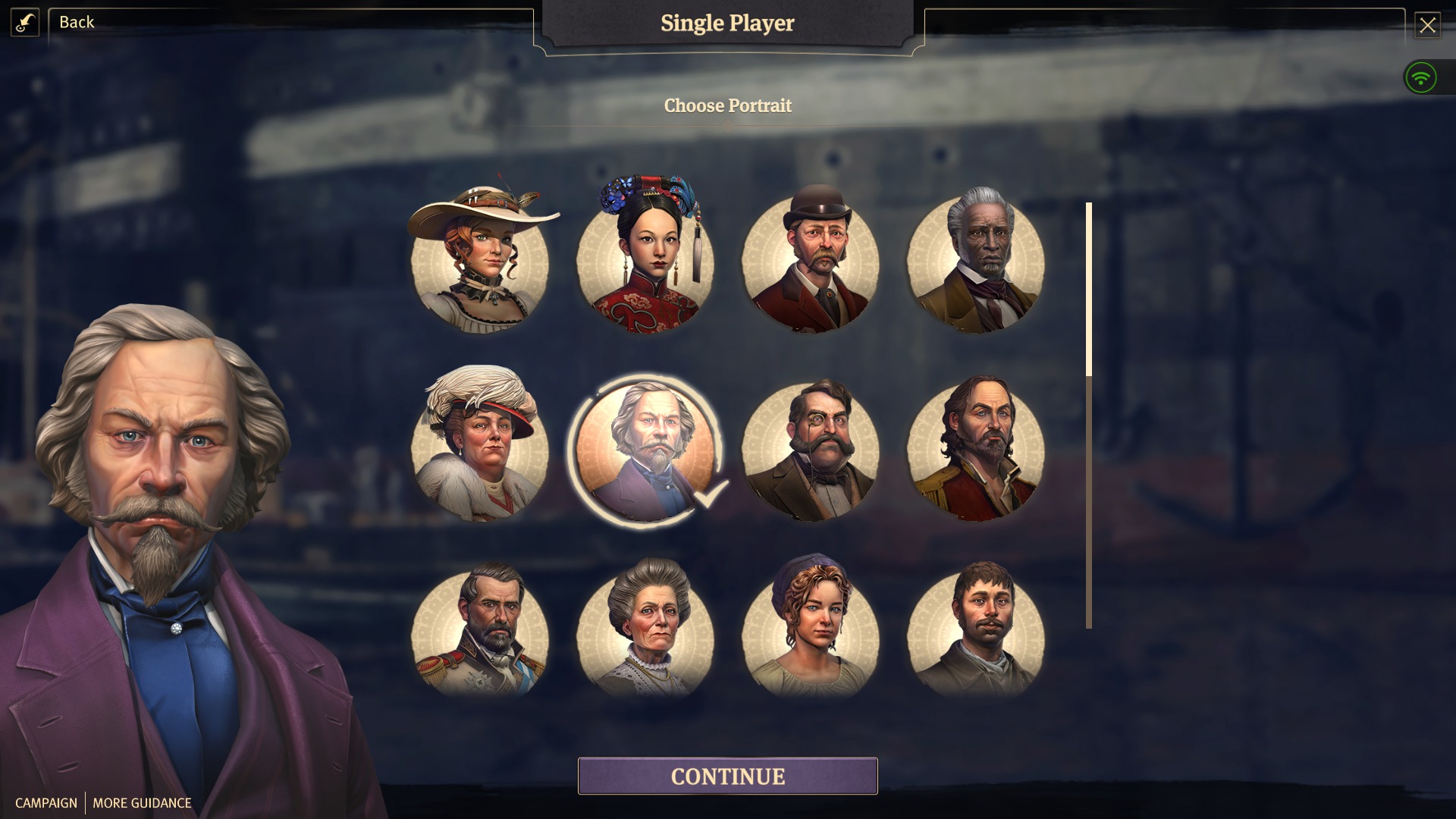 A few more flaws become apparent with longer play sessions. The minimap is too small and weirdly oriented. Ships move too slowly, even with time compression options. The trade route interface is fussy and prone to errors. And it’s oddly opaque about telling me exactly where my money is coming from or going to, leaving my settlement’s income prone to strange and unexplained fluctuations in cash flow. These are all minor gripes, which could be fixed with a patch, or maybe an expansion in due time, and they don’t detract too heavily from the core experience.

This leaves us with Anno 1800, a refined city-building game with a delectably savory approach to logistics optimization, a lovely core aesthetic, and a time-devouring rhythm. For me, that’s worth the cost of a historical anachronism or two.