Videogames owe a lot to Aliens. The movie classic gave us the archetypal space marine, then pitted them against a nest full of drooling Xenomorphs, the titular Aliens that have served as a blueprint for so many videogame enemies.

It seems poetic, then, that Aliens has finally reclaimed the gameplay it inspired. Both Contra and Metroid have liberally stolen from 20 Century Fox’s franchise over the years, and I can think of few things more fitting than to see the developer of Contra 4 producing an Aliens game with a retro Metroid flavor.

Aliens: Infestation is the game I’ve wanted for years. I am not disappointed by the result. 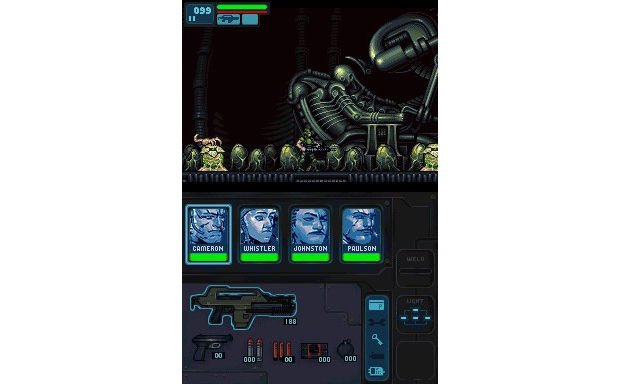 Set on Lv-426 in the aftermath of Aliens, Infestation puts players in control of four marines as they search the remnants of the Sulaco and uncover yet another shadowy plot by the sinister Weyland-Yutani corporation. While each Marine has his or her own distinct personality and dialog, do not get too attached to them — they likely won’t survive to see the end of the game.

Aliens: Infestation is a game about loss, taking the depressing spirit of the Aliens movies to heart and presenting a game where anybody can die … and probably will. There are 19 Marines to discover and collect throughout the game, and when one of them gets killed off, they stay killed. Players have a chance to rescue fallen comrades from Xenomorph nests, but if the escape attempt fails, they’re never coming back.

To ensure that players feel the dismal sting of death, WayForward Technologies has made Aliens: Infestation a damn tough game. Taking an old-school scrolling shooter approach, players investigate the Sulaco and wider areas of LV-426, facing some incredibly stiff resistance along the way. Health bars are not huge, a stamina gauge limits the ability to run or dodge, and bugs are very tough to put down. 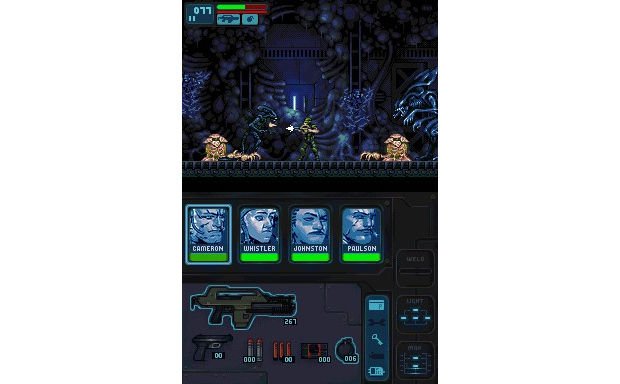 This difficulty can sometimes border on the unreasonable, especially when facing fast-moving monkey-bugs that deal damage by touch alone or when Xenomorphs suddenly jump at you from several feet away. Sometimes, enemies are strategically placed below elevators and ladders so that taking a hit is inescapable. When the game wants to hurt you, it will hurt you no matter what. While this keeps the game incredibly tense, it can become annoying when every hit you take knocks you down, the dodge roll is ineffectual, and Xenos can close the gap between themselves and you without recourse.

Despite these grievances, however, Aliens: Infestation is an incredibly intense shooter experience, one that makes the Xenomorphs genuinely threatening for the first time in years. Not only are the regular Alien Warriors deadly, the various boss creatures lying in wait are utterly brutal, more than capable of taking out an entire squad of Marines if players aren’t careful. Memories of Castlevania are evoked when players are down to a sliver of health and desperately trying to get back to a save point in order to find sanctuary, knowing that failure truly puts something on the line.

As noted, Aliens: Infestation borrows heavily from Metroid. Backtracking is a big part of the experience, as some areas are closed off until players return later with new equipment. Sealed doors need to be opened with welding equipment, bug resin needs to be burned away with flamethrowers, and broken steam pipes need to be closed off with wrenches. The backtracking can get a little overindulgent, especially when players are only given a vague clue of where to go, but it’s otherwise a very good take on classic gameplay. 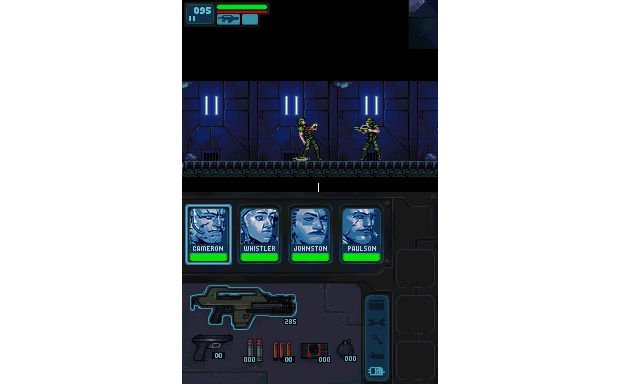 There is a range of iconic weaponry to discover throughout the game, from the unforgettable pulse rifle to shotguns, flamethrowers, and smart guns. While the flamethrower is disappointingly weak, the smart gun is a beautiful weapon that becomes crucial as soon as it’s discovered. Each gun can be upgraded three times by items hidden throughout the game, improving their ability to dish out death. Unfortunately, only one main weapon can be carried at a time, which I find inconvenient, especially when you need the useless flamethrower to burn open doors. I’d like for at least two weapons to be equippable alongside the emergency pistol.

Another disappointing element to the game is the lack of rewards for exploration. There are many hidden air vents leading to secret areas, but very few of these areas contain anything useful. While health pickups and ammo drops are welcome, these things are replenished in save rooms, meaning that running out of essentials isn’t a huge issue. Also, if you already have four marines, any new ones discovered refuse to join your party and stay where they are, meaning that discovering them can be rather pointless. With only weapon upgrades on offer as tangible, lasting rewards, it often feels like a waste of time to explore, especially when you fight your way through an infested air vent only to discover an insultingly empty dead end.

These disappointments aside, Infestation is the most satisfying Aliens experience in years. From its retro visuals (including some great Xeno animation) to the authentic sound effects and fittingly subdued music, this is a game with a lot of respect for the franchise that fans ought to adore. The slow pace and knowledge that Xenos can creep from scenery or burst from grates in the floor lead to a surprisingly thrilling experience, something that’s very hard to successfully achieve on a handheld system yet looks effortless in the hands of WayForward. 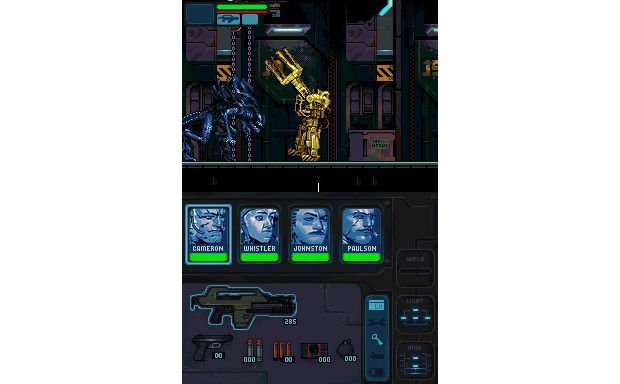 Of particular note is the cast of Marines. As previously mentioned, each one has a distinct personality, original dialog, and stylized character portrait complete with gritty comic book aesthetic. Every Marine has a defining pose in save rooms, and quite a few of them are genuinely funny, affable personalities. Losing a favorite character is painful, especially when they’ve been with the player a long time. I just wish less likable ones could be swapped out for freshly discovered recruits when the squad is full.

Aliens: Infestation could stand to offer a lot more rewards in respect for the risks players take, but ultimately this is a game that makes Xenomorphs intimidating once again and provides a stiff challenge with lasting consequences for failure. Packed with references to the Aliens movies, including Power Loader battles and an intense APC escape scene, this is a game made by fans with the fans in mind. After recent disappointments from the Aliens franchise, Infestation brings it all home and makes for a thoroughly captivating adventure.