First and foremost, I knew I was in for some frenetic arcade-style action. This is a twin-stick shooter from Housemarque, the studio behind Super Stardust HD and Resogun, so that’s a given.

I also came in thinking it seemed similar to Arrowhead’s Helldivers, conceptually. While I adored that brutal game, some players loathed its friendly fire, ammo management, and all-around harsh design. Which is fair. They’ll be pleased to know that Alienation keeps the joyful chaos but is far more forgiving, and thankfully, these two sci-fi action shooters don’t overlap much in practice. 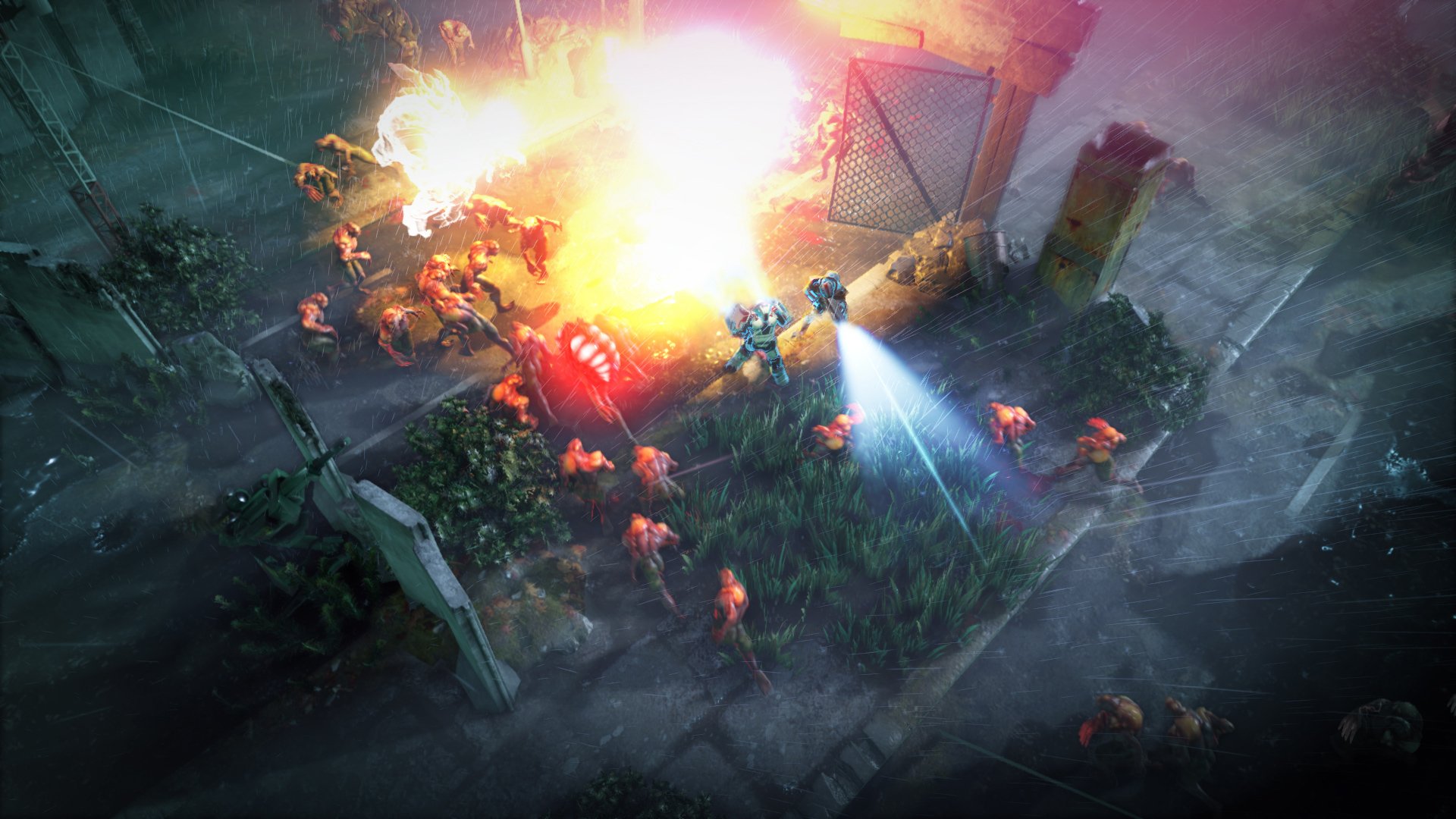 Here, the aliens have long since started invading our planet and, well, humanity isn’t doing so hot. As one of three exosuit-wearing character classes, you can begin to fend them off in earnest. There’s a globe-trotting story with fully-voiced narrations, but it will fade away as you get caught up in the relentless drive to make monsters explode spectacularly and collect precious glowing loot.

The foundation is built on Dead Nation, but this is more of a faster-paced spiritual successor with Diablo leanings than a rehash of that exact approach. There are item drops demarcated by the usual shades of blue, purple, and orange to signify rarity. You can socket your guns and grenades with upgrades, or recycle them for materials to spend on re-rolling individual stats (rate of fire, ammo count, that sort of thing). Damage indicators fly off enemies’ heads as their health bars melt away. It’s nothing we haven’t seen before, but it’s smoothly implemented, and those old hooks still motivate me.

Even if you aren’t into obsessively grinding for the Next Best Thing, that’s fine. The basic shooting and maneuvering feels inherently great. Just wonderful. Things are always blowing up, whether it’s you, or enemies, or you and enemies because a stray shot set off a chain reaction of wrecked cars. Most of your time is spent dealing with hordes of underlings — mutated not-zombies and these annoying, bitey spiders that even more annoyingly hatch from lava-producing eggs — but there are lungers, snipers, shield-bearers, and walking flesh bombs. Alienation throws a lot your way and figuring out how to manage it all at once makes it such a thrill to play. It’s this juggling act between shuffling through abilities and weapons, nailing quick reloads, and knowing when to dash or do a melee strike.

Leveling up, you’ll gain points to spend on three active and three passive abilities. There’s a stealthy sword-wielder who can drop airstrikes, a beefy tank dude for smashing and blocking attacks, and my personal favorite, the Bio-Specialist, who can heal, lay down a trail of poison, and unleash flesh-eating swarms of nanomachines. The skill trees are malleable, so when you inevitably spend your points unwisely or just generally fear commitment, you can swap the numbers around at any time.

Most levels will have you hopping from revive point to revive point en route to some objective on the map and your eventual chopper extraction, or you can be extra bold and destroy those checkpoints to increase your reward at the end of the level, assuming you don’t die along the way. You could also just opt to beeline it if you’re skilled enough! Alienation isn’t punishing when it comes to player death, particularly if you have friends to pull your sorry ass back up. After dying, your XP multiplier is reset, which is admittedly painful, but you can respawn and try again as many times as you need.

There are only several distinct locations, but the maps themselves are huge enough to house multiple levels without feeling overly familiar. I’m starting to grow tired of them now, but that’s after playing the game a few times through. So, pretty good (aside from getting temporarily caught on some hard-to-discern bits of scenery from time to time). As far as what threats you’ll face and when, there is a large degree of randomization, meaning you need to learn enemy tactics, not their specific placements. You can’t mindlessly charge ahead, and that goes triple for optional mini-bosses and one-off zones. I also like that you’re able to freely adjust the difficulty on a level-by-level basis for greater rewards.

After completing Alienation, the world resets with fiercer enemies, and you can then take on daily challenges to stock up on resources for upgrades. Occasionally, you’ll also be able to find keys for special zones, but it’s a one-life, one-attempt sort of deal and the difficulty ramps up considerably. Given how cheap a couple of the aliens can be (I still don’t know how to properly deal with the “Scary Laser Bastard,” as I call him), these zones are best tackled with squadmates. 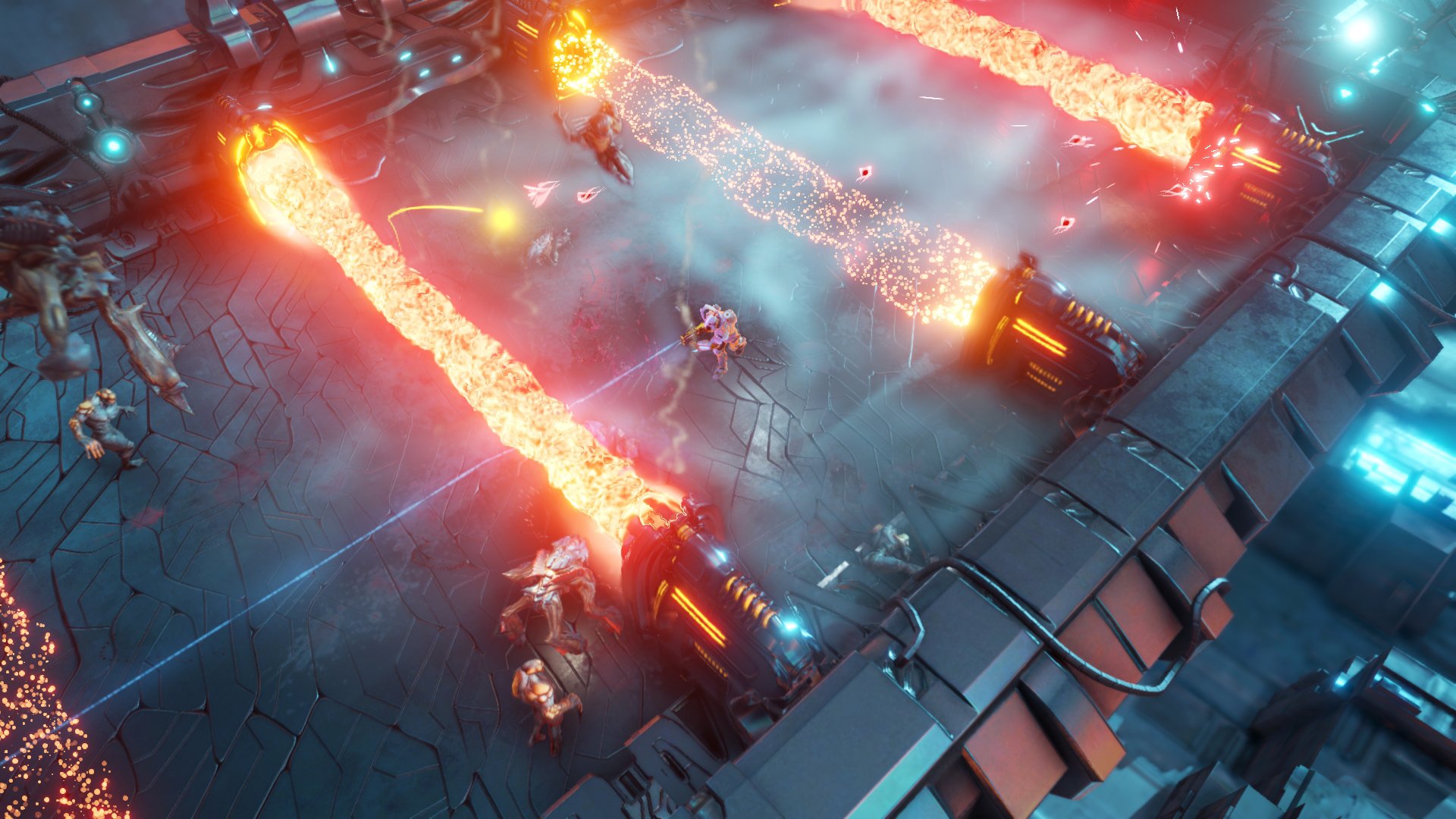 Playing pre-release, I was able to get in just a few rounds of co-op. When selecting a level from the map screen, you can see other players’ sessions and join in right there. It’s drop-in, drop-out, and for the time being, online only. My matches had no discernible lag except for one cross-continent game with a slight delay to my actions. Housemarque has also adapted invasions from Dark Souls for some PvP hijinks, but my experience with this system was limited and gave a bad first impression. On the second level, I enabled the totally optional feature and a high-level hostile player immediately and repeatedly murdered me while I dished out mere paper cuts with my puny starter guns. Welp, off ya go!

What let me down the most, however, is the lack of unique weapons. Given all of the loot mechanisms, I didn’t expect to keep finding the exact same shotguns, missile launchers, and boomerangs but with higher damage-per-second outputs. Useful, but uninteresting. Towards the end, you start getting weapons with passive abilities — an electric shock that spreads between nearby foes, or a fast grenade recharge, for instance — but there either aren’t many of these traits or I’m supremely unlucky.

Still, Alienation is one of the best-feeling twin-stick shooters I’ve played, so I can’t be too bummed. It wasn’t long before I had that realization, and now that I’m 20 hours and several character save files in, I’m even more convinced. Housemarque could stand to flesh out the endgame content and also add support for local co-op, but even if it doesn’t, I love what’s here.