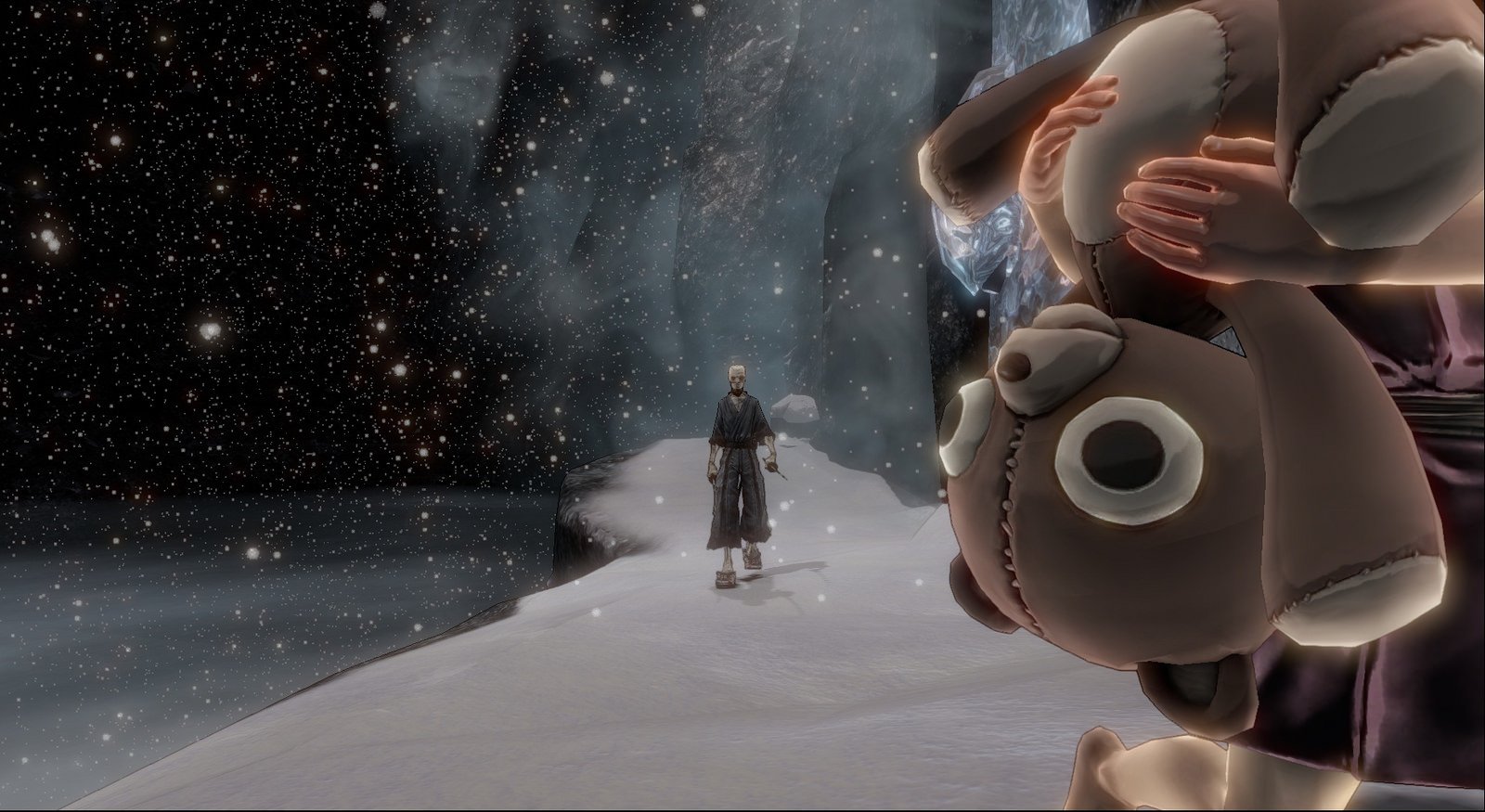 In the words of Samuel L. Jackson, “what kind of fucked up repugnant shit is this?”

To give you a bit of background, this series does not feature the titular Afro Samurai (though he is around somewhat) — instead, it focuses on Kuma, who as no surprise wears a giant bear head. Billed as a “brave warrior who once protected the great temple,” he was betrayed by Afro, and now walks the Earth in search of revenge. You’ll learn a bit more about how Kuma died during the course of this first volume, which is a continuation of the original game.

The entire time during my play session, I was basically asking myself why this had to exist. There are elements of the Afro Samurai franchise I like, but forcing people to play through this new, quite frankly terrible series to delve into it is almost insulting. Why not just produce an OVA or even a web short? Much of the game consists of beyond campy voice acting, like anyone was invited into the studio for recording sessions, and simple art stills that fail to effectively tell any sort of cohesive narrative. There’s also a really weird (but mostly good) RZA score that is peppered throughout Afro Samurai 2 that doesn’t quite fit with the rest of the game. It just feels like this shouldn’t have even gone to the developmental stages as a video game.

The lack of quality control is most apparent with the sound editing, which is so bad you’ll hear loud beats during key story sequences that drown out entire bits of dialogue. Major issues even pile up beyond that, as I noticed multiple sequences where the narrative audio was cut out prematurely, and the game has constant framerate issues both in and out of combat, leading to an overall shaky experience. One time I even entered a tutorial, came back out, and subsequently fell off a cliff, forcing me to restart the chapter.

I thought the non-playable bits were bad, but I wasn’t quite ready for everything else. There are some really weird “interactive” cutscenes that mostly consist of your character crawling on the ground during some dramatic event and picking up items or looking for some obscure object. If these were meant to instill some sort of emotional effect, they utterly failed, partially due to the wonky physics and broken game engine.

The action sequences are also horrid, partially due to the aforementioned framerate issues, but also because of the fact that it doesn’t even feel like a budget game that would be welcome on the original PlayStation. Kuma has access to counters, attacks, jumps, and a typical rage (Devil Trigger) ability, as well as the power to switch styles. It’s all painfully slow, and to add insult to injury, many of the animations don’t even connect. You’re basically just going to mash attack and counter occasionally with very little nuance involved.

The camera is also a huge problem, as it’s fixed and it constantly flips out in a seizure-worthy fashion. What’s particularly troubling about the way the camera works is when you’re traversing stages, you often can’t see what’s ahead of you, leading to some lame pitfall deaths or ambushes. It’s not like the game is hard by any means as it’s essentially a button-masher, but it’s constantly working against you at all turns through technical faults. This lurid affair will last roughly two hours, which is the standard for episodic games. Yet, the fact that you have to suffer through this begs the question entirely — “why was this episodic at all?” Were they going to lose the license or something?

I usually hold off on telling people not to get an episodic game until more of it is available, but even after playing the first volume of Afro Samurai 2, I can say with authority, “do not get this.”