You spin me right round

Aegis of Earth: Protonovus Assault is a frustrating game. Not because it’s difficult (it sure isn’t) and not because of its nonsense mouthful of a title (although that sure doesn’t help). It’s frustrating because there is a legitimately neat idea at the core of the game. A new, kind of quirky, and potentially fun twist on the tired tower defense genre.

Unfortunately, that neat little idea is buried under hours of cloying anime cliches, repetitive grind, and a muddy, lazy presentation. 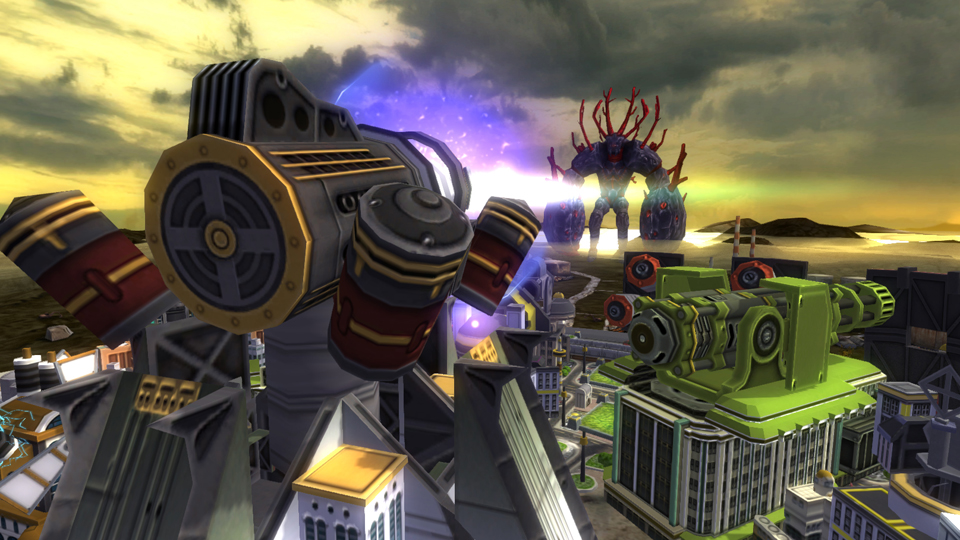 Aegis of Earth takes place in an anime future world that is trying to recover from the “silent apocalypse,” a worldwide giant monster attack (I’m not exactly sure what’s “silent” about a Godzilla invasion, but there you go). Fear of ongoing attacks have forced the remaining tiny clusters of humanity behind modular walled cities protected by giant cannons. As the last holdouts of civilization, the last flickering light of humanity’s dying flame, the monumental task of manning those gigantic cannons falls to a bunch of anime teens, because of course it does.

These modular cities are arranged in movable concentric rings like a big Lazy Susan which provide the basis of Aegis’ unique design. When under attack from oncoming monster hordes, those rings can be spun around to direct firepower in 360 degrees. It sets up some legitimately interesting strategic questions. Enemies can attack from any angle and different monsters require different responses (giant laser-spewing, zeppelin-like blowfish are best handled with long range missiles, while eel-like swarms of land skimming invaders are most easily dispatched with a volley of machine gun fire). Each weapon has a specific range and sweep which encourages rapid and constant realignment of your city mid-battle. Naturally the goal is to always have the best weapon for the job facing the most pressing threat.

Units can combine together Constructicon style when the same type of unit is stacked in a line from end-to-end on the various rings. This, combined with the need to build around unmovable buildings or unusable patches of land, informs the strategic layer of the city-building portion of the game. It’s a cool idea. I think Acquire was really on to something with the ring design. It provides some neat tactical questions and could set-up some brilliant play and strategies. Which is why it’s a shame the game absolutely does not require you to care. 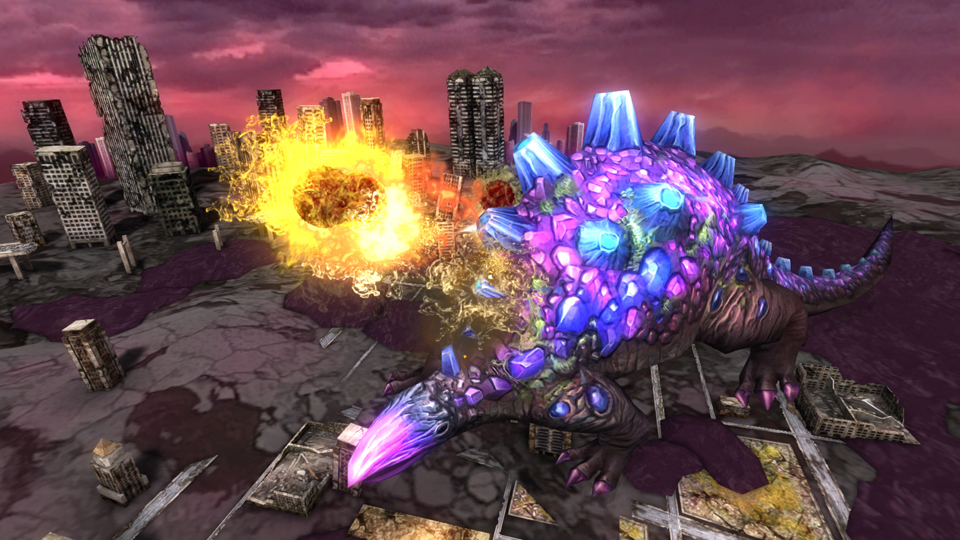 Aegis is generous to a fault. Most enemies lumber towards your city with all the urgency and enthusiasm of a zombie on Xanax. Despite setting up an interesting platform, the game in no way demands that you interact with it. In a fit of spiteful boredom, I played an entire mission with my hands off the controller. Only adjusting a missile launcher once to twice to take down an otherwise out of range floater, my city survived the onslaught with minimal damages and my approval rating as hybrid commander/mayor remained rock solid. *yawn*

The gameplay being boring is already a death knell, but Aegis doubles down on tedium. Just getting to the next mission is a near unbearable slog through reams of mostly text based anime dialog (there are occasional portions of generally competent voice acting, but the game is frugal with their use). 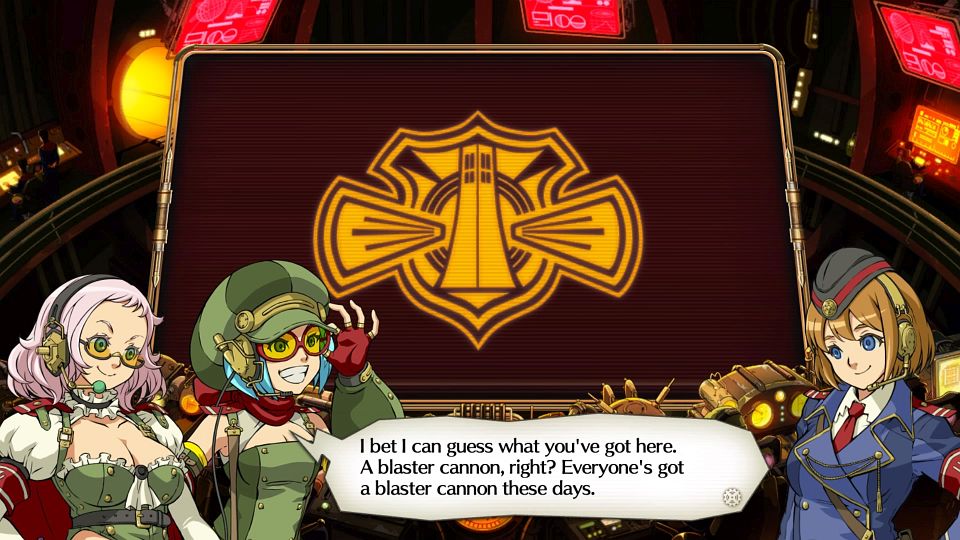 Hot-headed, spiky-haired dimwits complain to vapid, chesty engineers who all play pranks on the 26 year old deputy commander who is widely considered an “old maid” at such an advanced age. Her ongoing status as a single-lady is the subject of about 50% of the game’s humor and is shoehorned into almost every conversation (rewarding her with an XP boost at the end of a mission results in her asking if you happen to know “any eligible men.” What a desperate and sad 26 year old spinster! Hilarity).

The writers must have thought they had a real hot property on their hands because they wrote thousands of lines of dialog for these chucklenuts. Unfortunately, none of the characters ever managed to rise above their cliche designs and the by-the-numbers giant-monster plot to convince me to care. A few hours into the game, I actively started mashing through their interminable gadfests and it still took an unconscionably long time to get to the next mission. 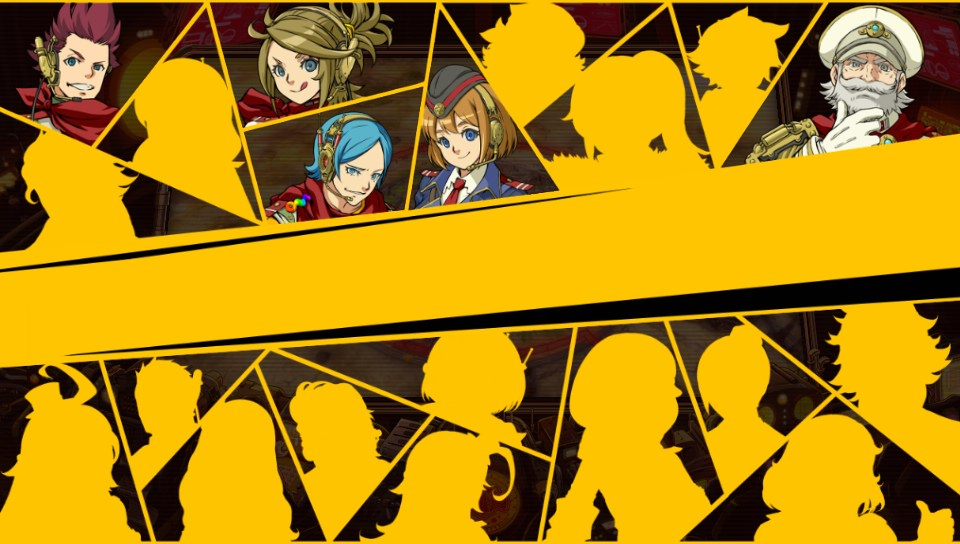 I had to laugh at the loading screens that blatantly chomp on Persona 4’s style while also teasing yet to be seen characters (as if I couldn’t wait to meet the next batch of blue and pink-haired teens). It’s like the developers really wanted to capture the same feeling of an ensemble cast, but it just doesn’t work. All the style in the world won’t save one dimensional characters.

It’s also unfortunate that the loading screens seem to be one of the few places where style was attempted. Being a cross-platform PS4, PS3, and Vita title, I wasn’t expecting much, but even still Aegis is noticeably muddy and poorly realized. Despite the simplicity of the design, I still occasionally had trouble identifying units and enemy types at a glance in the midst of low-detail city blocks and performance saving fog straight out of a PS2 game. 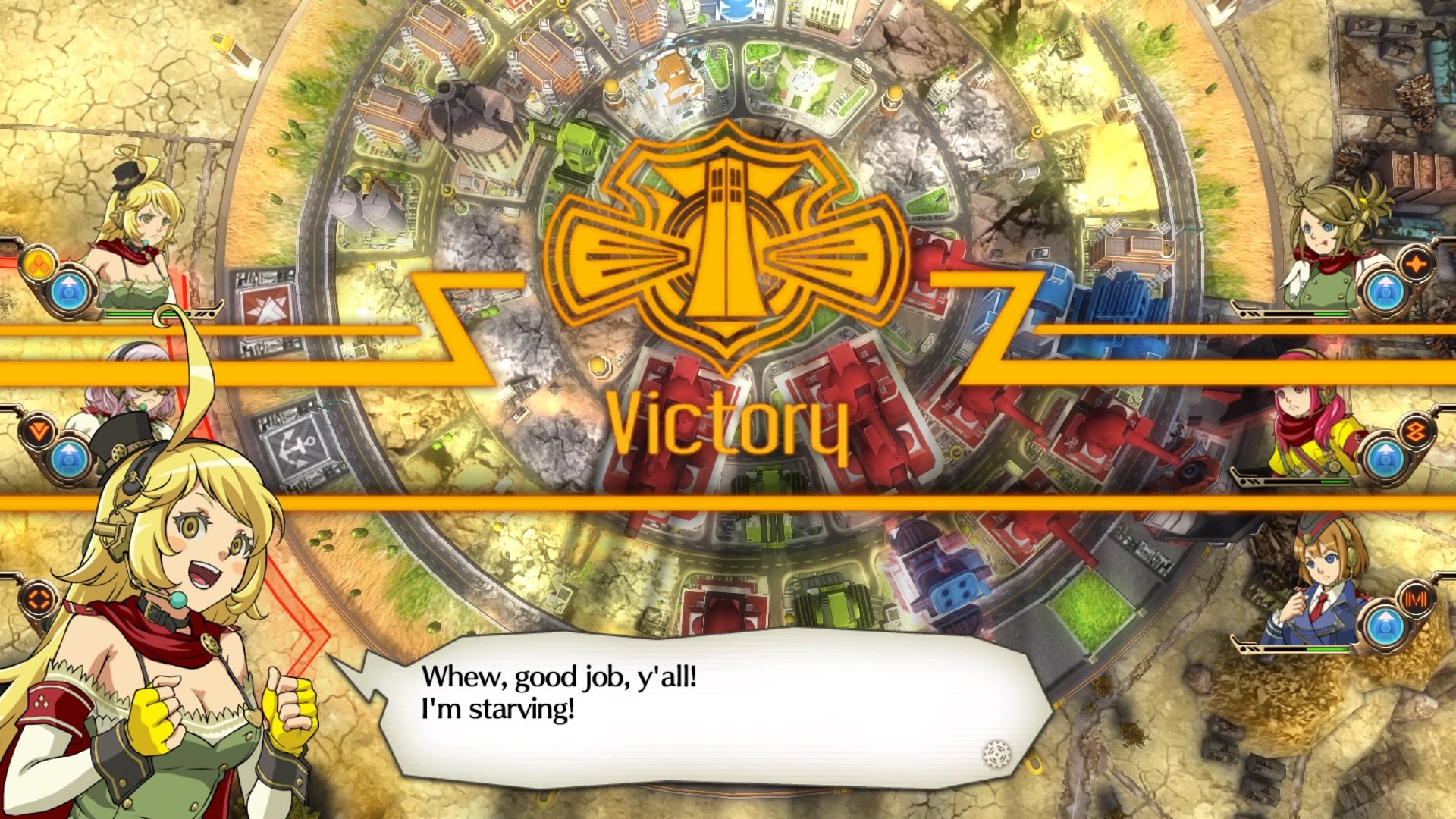 Repetitive cutscenes, drawn out copy-and-paste mission debriefs, and painfully monotonous city upgrade and building sequences bog down an already grindy game. While there are plenty of weapons and upgrades to eventually kit out your cities, you have to wade through hours and hours of tedium for the privilege. It’s just not worth it.

Aegis of Earth: Protonovus Assault is proof positive that one good idea can’t carry a title. The central gimmick is a good one, but there is just no reason to subject yourself to a game so unambitious and condescending.