Adventure Time is a great cartoon show, one that makes having a child a lot more fun than it would be if all I had to listen to was the screeching of Fairly Odd Parents every single day. Tapping very much into the Internet generation and its love for random oddity, Adventure Time is a fascinating and silly show that manages to retain a sense of innocence despite its often dark subject matter.

Absolutely none of that is discernible from playing Adventure Time – Legends of Ooo: Big Hollow Princess. 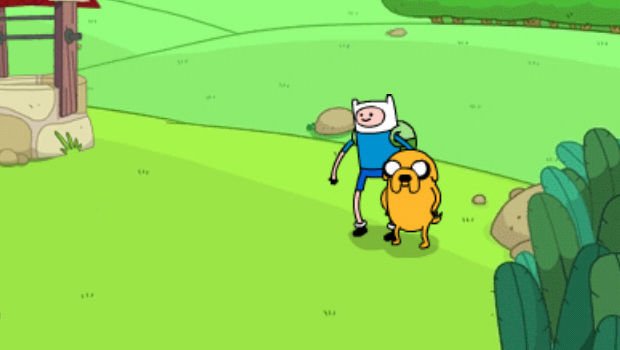 Legends of Ooo takes the form of a traditional point-and-click adventure game. Finn and Jake are moved in tandem by touching any desire area on the screen, items are picked up by pointing at them, and can be dragged from the inventory toward environmental objects and characters. It’s a simple interface for a simple game, which would be fine and dandy if the decision to stay “simple” wasn’t taken to such extreme degrees.

There is really not much of a game to this fifteen-minute experience. Within a series of mostly empty environments, our heroes face challenges consisting almost entirely of talking to someone, finding out what they need, and picking up their required item on the next screen. There are no real puzzles to speak of, you just fetch items that are placed a short distance away from the person that wants them. Once or twice, there’s a tiny sliver of thought required, such as putting stepping stones in a lake to reach an object, but they are insultingly simple and demand no more effort than simply dragging your finger two or three times.

The story and dialog is bland, providing none of the charm of the television show. Jake and Finn engage in lame banter and rely on out-of-context show references while familiar supporting characters show up for cheap applause. In theory, an adventure game based on Adventure Time is hilarious and has a ton of potential. Sadly, whoever made this didn’t care about the potential, and simply squirted out a quick waste of time in order to cash in. 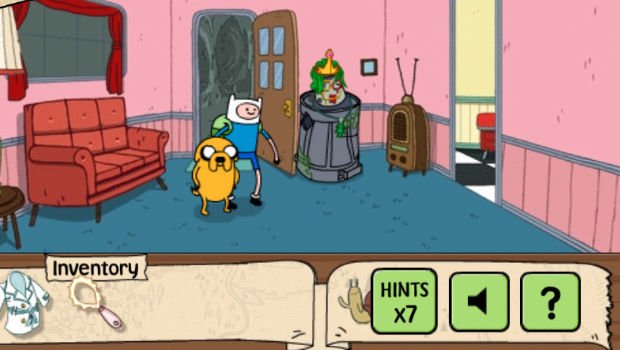 The production values are pretty miserable, too. While it provides a visually comparable representation of Adventure Time, the awful looped music is soulless and indicative of how lackluster the game is. Even worse is the fact that only Jake, Finn, and the Ice King have any recorded voiceovers, making conversations with other characters sound weird and disappointing anybody who’d want to hear Choose Goose actually speaking. Fact of the matter is, you can’t have Lumpy Space Princess appear on the screen and then present all her dialog as text. Her voice is what makes the character.

The final insult is that, very much like the Regular Show iOS game, this is actually a free browser title that is being released on iTunes for money. Only a dollar, yes, but a dollar too much when the free version isn’t even worth the fifteen minutes it takes to beat.

Adventure Time fans would do better to wait for WayForward’s upcoming DS game, because that stands a chance of actually being good. This is little more than a shameless little attempt to make a quick buck at the expense of a fun little show. I know it’s a show primarily for kids, but even kids can reasonably expect better than this.