I spoke at length about my underwater-gaming-anxiety when I previewed Abzû, so actually reviewing it was something I approached with apprehension. But this week, my day job was five straight days of grueling-ass landscaping that involved bleeding hands and breathing dirt, so a two-hour descent into the depths sounded pleasant, especially if air conditioning was involved.

Intrigue, mystery, and wonderment were expected and somewhat delivered, but Abzû‘s oceans seemed deeper before I took the plunge. 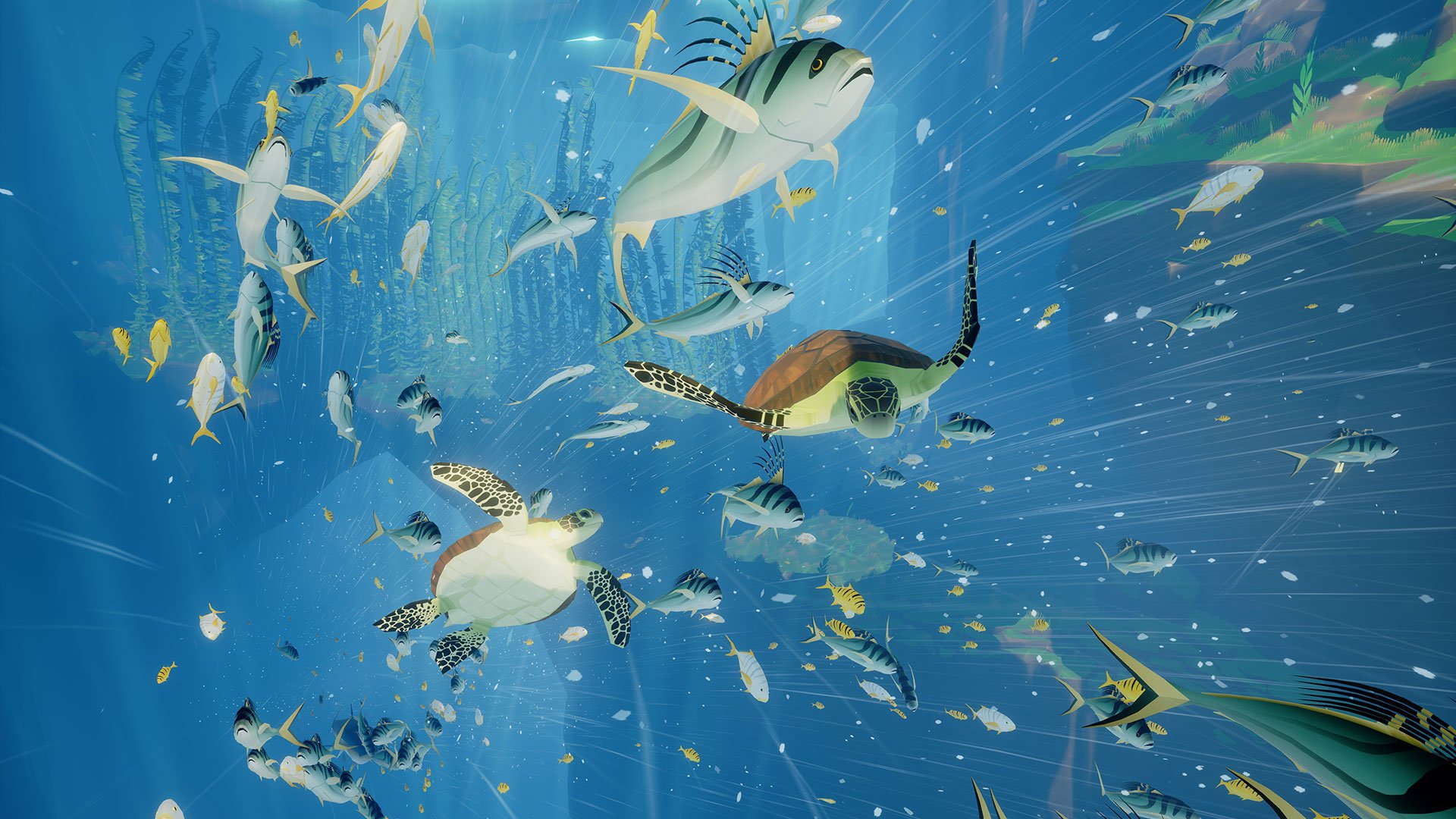 Developer Giant Squid is helmed by Matt Nava, art director of Flower and Journey, and he immediately makes his presence known with Abzû‘s very first splash. From start to finish, you’ll guide a character known as the Diver through a harlequin kaleidoscope of sea life. There’s not a single area that feels like an artistic B-side; swimming through an armada of swirling fish, discovering submerged statues, and synchronizing your swimming with gargantuan whales all make for incredibly memorable visuals.

Similarly, Austin Wintory’s music is dense yet delicate, as graceful and arcane as the water you’ll propel through on this journey. It’s inviting enough to tantalize even someone afraid of the inky abyss with promises to the player that whatever’s around the corner can’t be that horrible. In fact, wouldn’t it be better to just know? The imagination is always more terrifying, right?

When I write reviews, I generally explicate aesthetics last, treating them as the pretty little bow that wraps up the way a game feels, moves, interacts. But here, that’s really the only substance that Abzû offers. Along the way to your unstated goal, you drift through the ocean on a linear path, occasionally finding some kind of switch/lever/item that allows you to progress through another door. You can meditate on certain statues to watch the surrounding creatures as they live out their lives, both succumbing to and benefiting from the food chain. There are also small portal things you can interact with to bring new life into the ocean, and a set of of collectible items that you can seek out.

And that’s it. Swimming itself is mostly intuitive, though when doing a sort of loop-de-loop and inverting yourself, the controls almost seem to reverse themselves and become unruly. That the controls are simple is both a blessing and a curse. The skill barrier that keeps many from trying games is lessened, making this a more universal experience that anyone could try. However, since you’ll be doing more or less the exact same thing for two hours (important if you’re the type to gauge game value in a hour-to-dollar ratio [I’m not]), it has an overly-simplified feeling.

Even that caveat is not necessarily a bad thing! As I mentioned prior, I had a rough week and needed some relaxation time, so having what almost amounts to an interactive aquarium has a relaxing component to it that I enjoyed. The problem is that Abzû also attempts to tell a story that isn’t as enthralling as it wishes to be. Giant Squid touts it as “a universal myth that resonates across cultures,” but it never feels as grand as that. The halfway point promises intrigue and a deep fear that threatens to make things interesting, but immediately afterward there’s a section later on that practically begs for some pathos. It comes across as unearned and falls completely flat.

Abzû benefits from being a short game. I don’t mean that in the dickish “I’m so glad it was over quickly” way. By being so brief and focused, I can easily remember what I did from start to end, which is quite rare compared to the twenty-hour epics that can be common in this industry. When recalling my journey, my head is filled with gorgeous sights and sounds, but there’s also a tiny whisper telling me the environment was the only part of the game that was mutable in any way. When an ocean feels stagnant, something’s wrong.

I did enjoy being in the water, but I can’t help but feel the beautiful visuals and music were jamming pictures of places and emotions in my face instead of earnestly telling a compelling story. There’s an unshakeable air of falsity about Abzû. As a treat to the senses, however, it’s hard to beat.