The NES era was a special time for a lot of us. Many of the staff here at Dtoid will always have a certain attachment to the period, myself included.

Abobo’s Big Adventure is a tribute to all those who grew up with the gaming gods of old. This free Flash game is quite fun and funny, definitely well worth a trip down memory lane. 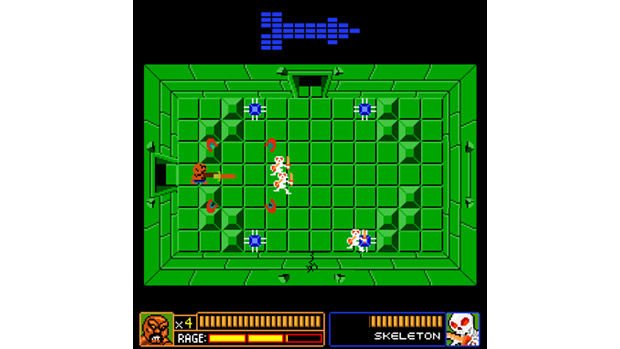 Abobo’s Big Adventure is a minimal game, a tribute to the NES generation in which everyone from Donkey Kong to Ryu Hayabusa makes an appearance in some form or another. Focused on punishing difficulty and an assumed proficiency on the part of the player, Abobo is a juxtaposition of the modern and the classic, a tangential parody of the youth and innocence of the NES era that melds grotesque physical comedy (read: poop rockets and bloodsport) and the simple gameplay of times long past.

Drawing purely from the comedy of anachronistic allusions, Abobo constructs a caricature of everything about contemporary video game culture and feels like nothing less than a snarky shot at the 21st-century gamer. In my experience, a delicious cocktail of allusion and parody are the highest form of comedy. They necessitate prior experience and knowledge as well as engagement and immediate reflection upon the consumed work.

Abobo fits right in that niche, tapping into the collective experience core gamers have with the NES. In much the same way that Greco-Roman art can be said to be the foundation of Western culture as a whole, the monomyth of the gamer would be the marriage of Mario, Mega Man, Metroid, and more. It is an aspect of our culture that we all share to some degree, even if the days of the NES weren’t our own.

While never quite reaching the comic brilliance of Portal or Psychonauts, Abobo has more than a few “laugh out loud” moments. More often than not, however, it warrants a mild “heh.” Solidly constructed in general, the game still steps into the realm of excessive too often (like the aforementioned poop rockets). It was originally made as a free Flash game for Newgrounds and has that classic Newgrounds toilet humor. It fits the audience well.

Stepping outside the allusions, Abobo doesn’t have much depth, though in this instance, that’s not necessarily a bad thing. Controls are very simple — you move with the arrow keys and execute techniques with “A” and “S,” effectively using the keyboard like an inverted NES controller. Actions are context-sensitive, as the levels are a wildly varied smorgasbord of 8-bit staples. You can go from fighting down Double Dragon alleyways, questing through a penis-shaped Zelda dungeon, and touching gloves with Punch-Out‘s Little Mac.

Playing just like their respective sources, from a mechanical perspective alone, the stages are damn near perfect. While often a bit too hard for my tastes, they never veers into the realm of absurd (see I Wanna Be the Guy). The title relies on technical skill, not raw trial and error, so if you die, it is your fault. This, like everything else, feeds into the theme of evoking nostalgia for an adult gaming audience. Then there are the boss battles, glorious indulgences in third-generation gaming that amount to simple tests of skill. The 80’s aesthetic is matched with gusto, placing the protagonist side-by-side with engines of unbridled nostalgia. 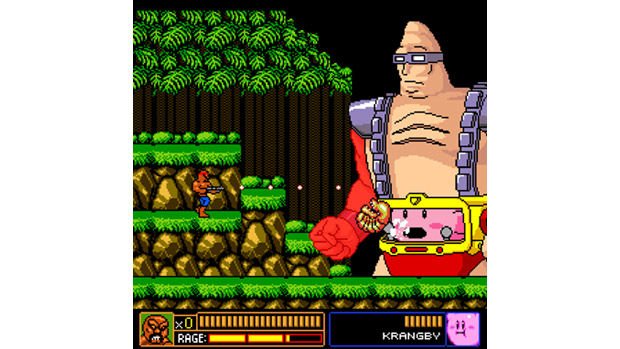 Clocking in at around two hours, Abobo manages to pack a lot of content in a very small space — each of the eight levels contains several dozen references to the NES. Though I realize that the game is meant to throw the audience into the wayback machine, I also realize just how far games have come since then. Even if you are only playing for challenge, there has been a resurgence of modern games that are better in nearly every way (e.g. Super Meat Boy). This isn’t to say that Abobo is bad, but it isn’t as good as other, newer-feeling games. Still, the experience as a whole is unique and definitely worth a look, especially if you grew up the late 80’s or early 90’s. Its referential humor is fun and not something that can be found anywhere else.

Abobo’s Big Adventure is a competent, very short but sweet throwback to our Golden Age. The referential humor and absurd juxtaposition of modern sensibilities on older mores is great, but it’s all been done already and better. The game does nothing wrong, in the strictest sense, but it just doesn’t have that “pop,” that “wow” that leaves a truly lasting impression. That said, it is free, so if you’re a gamer on a budget or someone just looking for a few yucks, it’s definitely worth it to follow Abobo on his journey, at least for a little while.