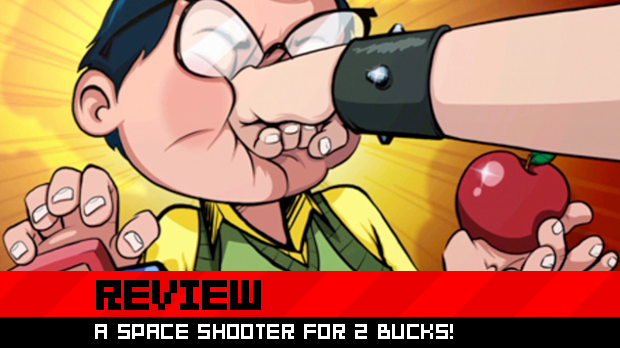 Simplicity.  Sometimes a simplistic concept can be an amazing one.  Take this game for example.  A Space Shooter for 2 Bucks! takes the shoot ’em up genre and doesn’t try to clone geometry wars, doesn’t try to make a next-gen Galaga, and doesn’t try to innovate the genre with some fancy new gimmick.  It just took everything you would expect a shooter to be and put it into one pretty little package.  A $2 package that’s worth every penny. 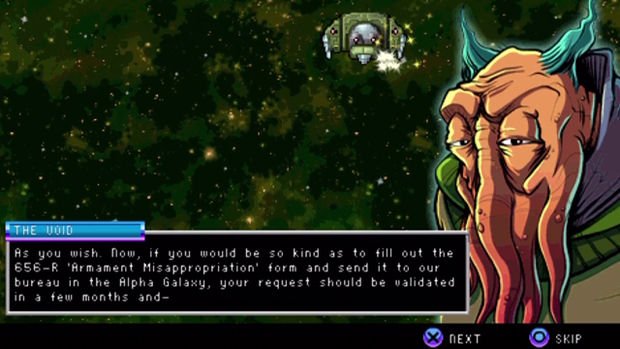 The game succeeds by adding a little bit of style while not breaking tradition.  You’re given comic style cut-scenes at the beginning and before each boss fight which act like mini-rewards simply for playing the game.  They’re just comic panels but they’re fully voiced comic panels.  Hearing the hero say “I pee everywhere to mark my territory… though I sometimes do it sitting down” makes it hard not to crack a smile.  You should know that these scenes may contain some swearing, but profanity has never bothered me and the fact that they were bleeped just made me giggle even more.

Beneath all of the humor is a great shoot ’em up.  Nothing crazy happens, you’ll just encounter enemies that fly in from the top of the screen, each with their own patterns and powers, and it’s your job to take them out.  As you do, you’ll collect orbs that you can redeem for upgrades to your ship.  These upgrades can range anywhere from better firepower, to better magnets for picking up more orbs.  Also, when you enter the shop you’re greeted by a love interest for the hero, and the banter between the two will keep you coming back.  I kept hoping he got in her pants for the sake of comedy.  I wont spoil the outcome for you though. 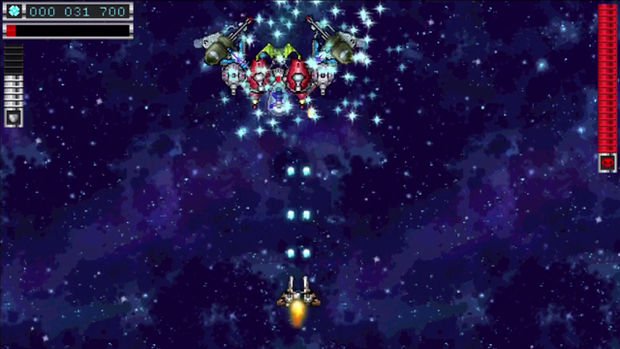 There are two different types of stages within the 18 different levels you can enter.  There’s boss stages that I mentioned earlier where you’ll be given a brief story, take out the alien, and get a weapon upgrade.  Then there’s the question mark stages where you fight a mini-boss that builds itself out of a bunch of other ships.  Kind of like Megazord from Power Rangers but in space.  Take it out and you’ll be rewarded with more orbs.  It may seem like it would be monotonous, but the ramped up difficulty is what keeps you coming back, maybe this time with a few new upgrades to kick some alien butt with.  Speaking of upgrades, if you ever find the need for extra orbs there’s a survival mode where you can take on enemies and use any of the orbs you collect in the campaign.  Nice if you want to play for just a few minutes, or just power up your ship to pro status.

Now I did encounter one big problem with the title.  Sometimes I would finish a level, the game would cross it off (indicating I had finished the boss) but then the cross would disappear and I would lose all the orbs I just collected and have to finish it again.  This even happened to me after beating the game which was extremely frustrating.  I had to finish a few levels twice just to proceed and it’s never fun losing something you just worked hard to earn.  Hopefully they fix the bug in a patch. 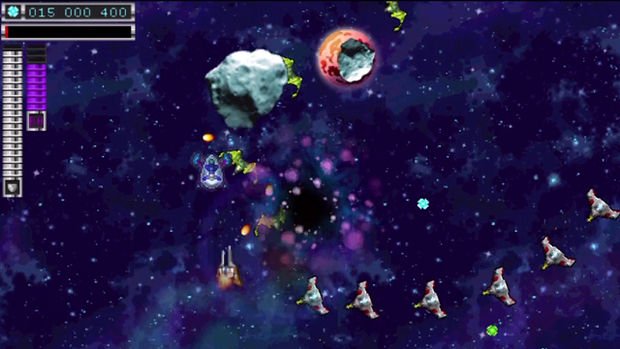 Though it’s over quickly, (I finished it in about 3 hours) the game does offer multiple difficulty settings.  Starting with “Wussy,” it moves up to “Competent” and also offers “Insane” for it’s starting roster of difficulties.  If that’s too easy for you “die trying” is unlockable so even those hardcore shooter fans will find something to enjoy.

If A Space Shooter for 2 Bucks is any indication of what other games are in the PSP Mini collection, then gamers are in for a treat.  It doesn’t try to do too much, it’s a lot of fun, and it’s cheap.  I wanted to keep coming back for more.  It was so addictive that I was distracted through the day because I was itching to come home and blow up some alien scum.  If you like shooters, spend the cash.  You won’t be disappointed.