I’ve just saved the planet, and I couldn’t be less enthused about it. A New Beginning is a self-styled eco-thriller with a spot of time travel and science fiction thrown in for good measure. It launched in Europe a couple of years ago, but more recently it received the translation treatment and was added to Steam in the form of a new version, Final Cut.

This final version doesn’t exactly live up to the name, unfortunately, and clearly needed a lot more work. 2012 was a pretty wonderful year for the adventure genre, and this only makes the title’s glaring flaws all the more obvious and hard to swallow. There are occasional bright spots to be found within it, however, though it’s unlikely they will help anyone to overlook the numerous faults. 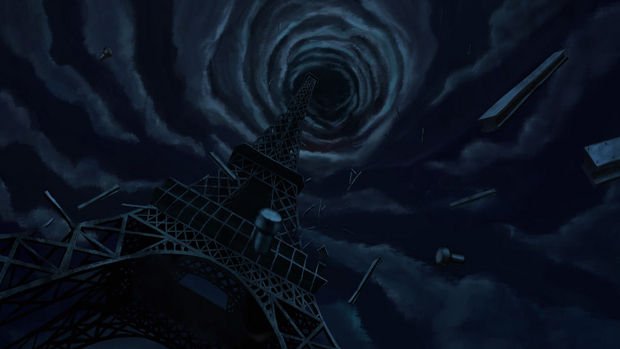 The future is bleak. Isn’t it always? Mankind is on the brink of extinction and a solar flare is about to wipe out the few remaining humans. Living underground, the residents of this apocalyptic world have come up with a zany scheme to save the world. It’s time they took the “final step. The step back… to the past!” And with that cringe-worthy line the game chugs along, spewing out atrocious dialogue like it was going out of style.

Characters generally fall into two camps — detestable, or just plain stupid. There’s some exceedingly forced character development, but it’s quite hard to spot amid the dozens of schizophrenic, inconsistent buffoons that litter the game. These inconsistencies are noticeable almost straight away. During the prologue, Bent Svensson — who has dedicated his entire life to developing a clean source of renewable energy — laments the rise of pollution. He doesn’t even like to kill fish, yet kills a bird with a machine that essentially poisons the avian bystander. His reaction is to not care at all, and he even mocks someone for feeling bad for the wee, dead fella. What a guy! He’s the hero of the tale, by the way. 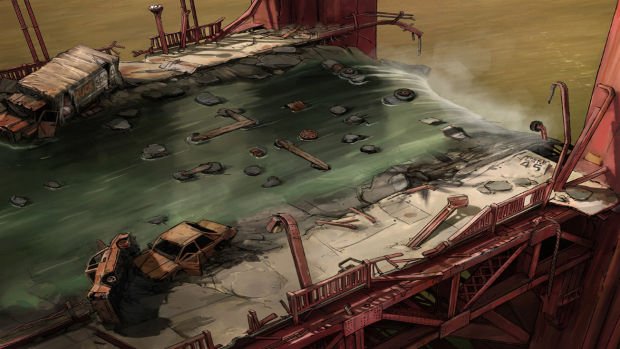 Honestly, I’m the sort of lazy “idiot” the game criticizes frequently. I don’t bother to recycle, and I moan a lot about expensive energy-saving light bulbs, but I am interested in intelligent adventure games and hard science-fiction, which A New Beginning purports to be. It is neither of those things.

The game’s message is utterly inane and deals with the complex issue of climate change with the sophistication of an infant. It is very clear that the developers think that their message is important, and they go so far as to break the fourth wall and point out that a science-fiction thriller can make a difference. Maybe it can, but not this one.

There certainly isn’t a requirement to be environmentally minded to play the game, though, since even environmentalists will find the experience to be incredibly oversimplified. 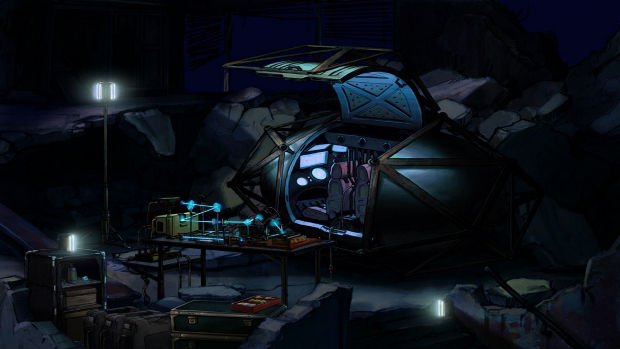 When I think of time travel and adventure games I get all flustered. It’s a combination ripe with possibilities and creative solutions to puzzles, thus I couldn’t wait to see what Daedalic had in store for us. Not bloody much, apparently. It’s employed twice in the whole game, but mentioned a hell of a lot, usually by Fay, one of the game’s two protagonists, as she tries to tell everyone that she’s from the future, so she knows stuff. World shattering stuff. There are no Day of the Tentacle-style puzzles here, that’s for sure. In fact, there are no puzzles at all which involve the use of time travel. Baffling. Utterly baffling.

Compared to the dialogue, the terrible story is award worthy. Daedalic needs to fire their translation team and their QA testers, because anyone with even a basic understanding of English would have been able to spot countless errors just within the first fifteen minutes. Sometimes it seemed like there was a mistake every time someone uttered a word. More often than not, the same mistakes reappear constantly, and the text frequently fails to match the audio.

In a genre unfortunately known for poor voice acting, A New Beginning takes the cake. Without fail, every single character proves to be incapable of sounding like an actual human being, or even a believable facsimile. I don’t know if it was due to the poor writing, bad direction, or just doing it all in one take, but the whole thing just ends up being an auditory crime. 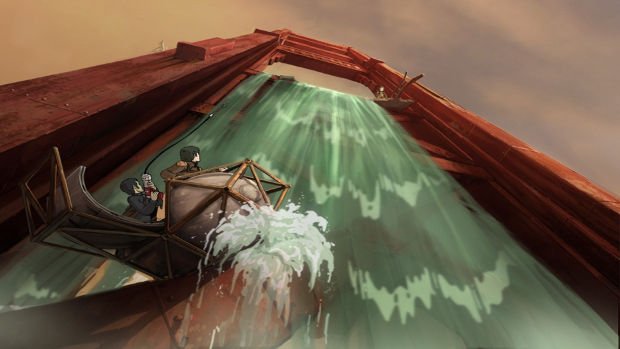 Fay is one of the worst offenders, in great part due to her being the most vocal character. In a ruined archive in the middle of a decaying San Francisco of the future, Fay manages to sound like she’s having an orgasm not once, but two times. This would have been fine if the game had turned into a more blue adventure, but sadly this was not the case. In one instance it is the voice actor’s interpretation of someone falling down mid-sentence, the other is just her trying to say “umm” when she’s confused by an irritating computer program. Call me childish, but I found it hysterical. I suspect that this was not the reaction the developers had hoped for.

In the puzzles there is some respite to be found, thankfully. Some verge on convoluted, but overall I found them to be organic, logical, and sometimes even quite clever. I must confess that a few stumped me, and I was really forced to wrack my brain for a solution. That doesn’t happen very often in modern adventures.

Lamentably, they do become somewhat repetitive, often devolving into twisting something and sticking it somewhere; the result is they aren’t as satisfying or imaginative as they could have been. Regardless, they are a breath of fresh air at a time when puzzles often get far less attention than the narrative among A New Beginning‘s contemporaries. 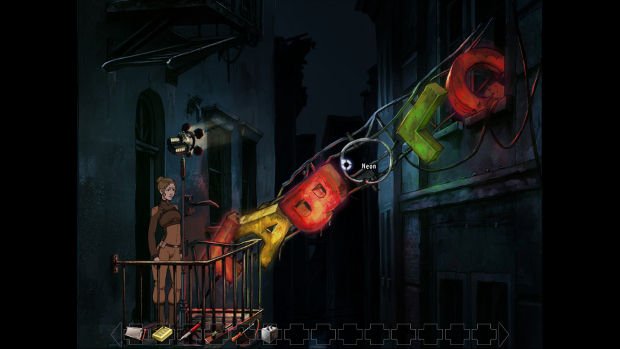 The biggest issue with the puzzles is that I didn’t really feel motivated to figure them out. I didn’t care about progressing through the story, and I dreaded having to listen to any more offensively bad dialogue. If I hadn’t been reviewing it, I’m sure I would have either skipped some of them (the trickier ones have this option) or tried to find a walkthrough. Actually, if I hadn’t been reviewing it, I would have stopped playing after an hour.

If I’d given up, I would have missed a lot of the absolutely gorgeous artwork, though. The hand-painted backgrounds and pleasing character art are by far and wide the best thing about A New Beginning. Detailed, striking, and full of color — it’s hard to believe that the rest of the game appears to be such a half-arsed effort.

I’m afraid to say that this highlight is marred by extremely poor animation that makes the stop motion animation of The Lost World or King Kong look completely fluid and seamless. The cutscenes also compare very unfavorably to the regular art work, attempting to mimic a confused comic strip. These comic-style scenes are also rife with hilariously awful lip syncing that leads to most characters doing curious impressions of fish. 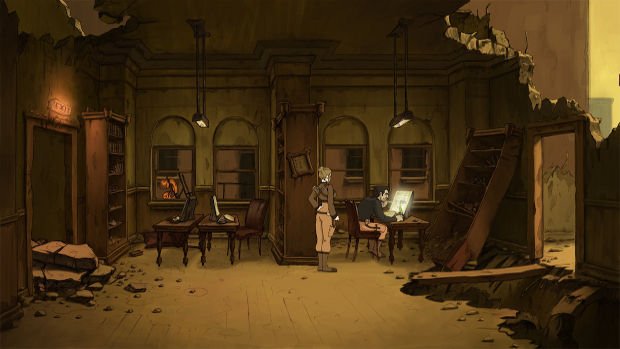 The German-language version — which was the original — is meant to be better, but alas I know about ten words in German so I really cannot confirm or deny this. It does strike me that the worst aspects of the game are due to the terrible effort made by the translation team and English-speaking voice actors, though.

If you are truly desperate for good puzzles and sumptuous art, then you could do worse than play A New Beginning, but I found it impossible to look past the many issues and really enjoy the few things it manages to do right. There are too many superior adventure games to count, and it’s not even one of the better games with an environmental message.