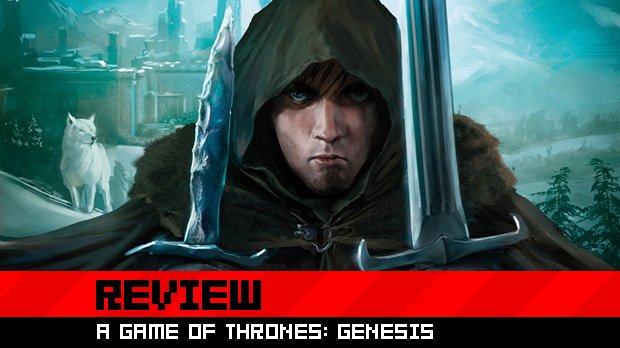 Bearing no relation to the recent TV show, A Game of Thrones: Genesis delves into a world of politics and backstabbing, and puts less of an emphasis on the tired real-time strategy mechanics seen in so many licensed RTS titles. The world of A Song of Ice and Fire is not one filled with enough epic battles to make for a more traditional strategy game, after all.

More or less eschewing every audience other than a hardcore PC strategy crowd that knows the entire Targaryen family tree by heart, starting with Aegon the Conqueror’s landing on Westeros, Genesis attempts to deliver an overly ambitious and deep strategy game and succeeds at it about as well as the average character succeeds at surviving in ASOIAF. 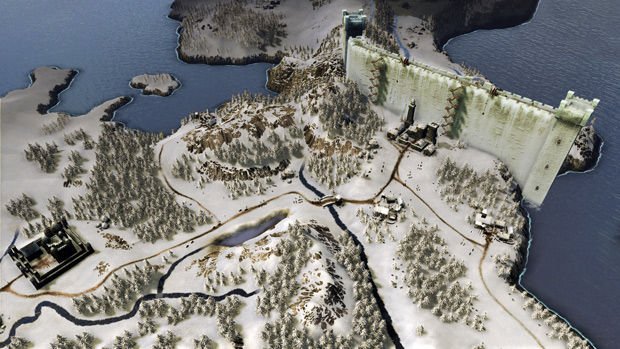 The meat of Genesis is divided into two parts. A single-player mode filled with mini-campaigns lets you play through some of Westeros’ historical events during the 1000 years before the first book, while a skirmish “House vs. House” and a multiplayer mode allow you access to many gameplay variables and options to use as you like.

In the spirit of the books, Cyanide has tried to turn this game into a back and forth of political maneuvering, spying, backstabbing, and shifting allegiances. During peace time, envoys can be sent to start alliances with neighboring towns. Enemy envoys can try to ruin such an alliance, lest you solidify it by marrying a Noble lady to that town — which you can buy for a handful of golden dragons.

Alternatively, you can use spies to scout the roads and try to make secret agreements — hidden alliances that yield you a town’s income while the enemy thinks it remains loyal — or to sniff out enemy secret agreements. Noble ladies can seduce (convert) enemy units, rogues can start uprisings in enemy-held towns, assassins can stealthily take out single units, and guards can protect single units from any such manipulation. 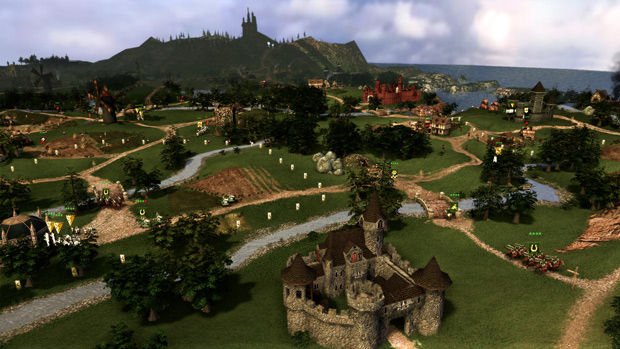 Essentially this leads to a feeling that you are managing a large postal service rather than forging together a kingdom. In most cases, an army of envoys needs to be micromanaged to gain as many alliances as possible, while you simultaneously try to manage your spies to keep an eye on turncloaks and enemy actions across the map. Units become increasingly more expensive as you build more of them and gold can take a while to start flowing, so it becomes a measured but hectic race to gain the most alliances in least amount of time.

As you do this during peace time, you can use gold to buy groups of mercenaries of the traditional cavalry, infantry, and archer variety. These serve as small protection and harassment units, or as a quick reaction force should your spies detect some enemy plots in the works. Carry out enough hostile actions, however, and war will eventually break out. Every house’s alliances and secret agreements are laid bare, and towns can only be taken by force.

During wartime, gold primarily becomes a resource to create peasants that can be set to work on available fields to harvest food. Food, in turn, is the resource required to buy armies — the only units able to capture towns and castles. If you are feeling particularly malicious, you can don your Ser Gregor helmet and take some knights to kill and pillage the entire food economy of an enemy House. Alas, in most cases during the campaign missions, warfare becomes a matter of waiting to build up resources, buying a few armies, and moving them from town to town until you win. 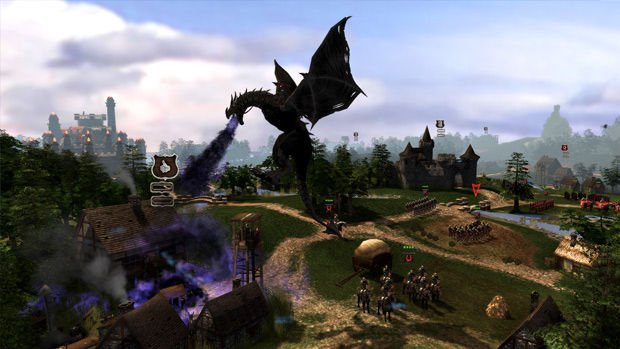 As a result, there are a lot of factors to manage just to keep your alliances strong, safe, and under your control, to the point of an overwhelming amount of micromanagement. You always feel like you are one small step behind as an assassin suddenly wipes out one of your envoys, and by the time you have enough money for a spy and a counter-force — or by the time they are in position — you’ve probably already lost the support of a few towns. This makes for a lot of chaotic and rushed clicking around in the skirmish modes, without ever feeling you are a House’s Great Lord as the game intends you to be — it feels more like struggling to keep up until you’ve suddenly won.

The mini-campaigns that explore the events of certain time periods prior to the first book (and the TV show) are what could’ve been a fun way to engage players in the larger world and history of ASOIAF, but these missions are marred by the oddest of design decisions. Taking control of most of Westeros as Aegon I Targaryan might sound awesome, and it’s fun enough to see him roast the hell out of Harrenhal mounted on his dragon Balerion, but the missions themselves are a bit drab. You’ll mostly be making alliances with X required towns, securing at least Y alliances, or raising Z armies to win a mission.

Strangely enough, while the world of Westeros itself is rather ugly and filled with scores of random and anonymous towns spread around the land, the key cities are designed to look their part but are simply called Feudal Homes instead of actually having names. It’s up to you to recognize Harrenhal, Highgarden, Casterly Rock, Winterfell, etc. Since the books offer plenty of town and city names and locations to draw upon, it’s mind boggling why you can’t even find them on the map of a game without already knowing exactly what they are called or where they are located. Even worse, half the missions are on random maps dotted with towns that depict some place in Westeros, but only the mission description will tell you where exactly.

The campaign’s missions also suffer from some weird design structures. One mission, where it is your task to pacify newly-conquered Dorne, ends up simply requiring you to buy and send out a bunch of merchants, kill a few assassins and brigands, and wait for a set amount of gold to accumulate. Your reward? A mission victory screen that tells you that in the end Daeron I Targaryen lost 50,000 troops and had to give up Dorne anyway. Likewise, sometimes you can choose which of two Targaryen siblings has the right to the throne only to be told upon mission completion that your Targaryen of choice simply died a short while later, because that’s how the story went. 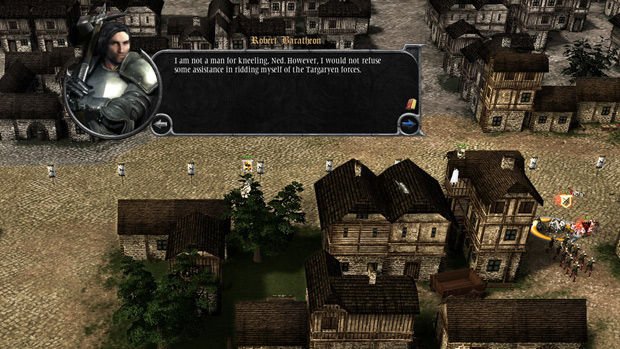 While the game’s mini-campaigns leave a lot to be desired from even a moderate fan of the books, the gameplay in Genesis does at least try to be different with its many layers of gaining and keeping control. The real meat of the game lies in the House vs. House skirmish mode, even if it becomes too hectic and offers too many gameplay options for its own good, while multiplayer can offer the game a long life provided you can find likeminded people to play with.

As such, despite not being particularly good, fun, and being about as pretty as the Maid of Tarth, A Game of Thrones: Genesis does offer some enjoyment provided you are willing to stick by it and have a couple of friends for multiplayer. You do need to be a pretty hardcore fan of the books to really get the most out of this game, though, and although it might sound cool to relive some of the more iconic wars, on the whole it never rises above mediocrity.

By trying too hard to capture the spirit of A Song of Ice and Fire, A Game of Thrones: Genesis raises curtain walls between the player and an expected level of fun, offering as many different strategies as George R.R. Martin has written descriptions of doublets. Yet in the end a doublet is meant to become bloodstained, and so it is with Genesis; a title that feels like control over its direction was loosened too much during development at the cost of becoming unwieldy and uninviting. Still, it never becomes insultingly bad either. You’ll just get bored of it well before you reach mastery of all the aspects the game has to offer.

If you are that hardcore fan who just has to experience what Cyanide offers outside of the books, and if you have a friend or two who are willing to dive into it with you, there’s a potential for fun to be found under a mountain of mechanics. At the current hefty pricepoint, however, it is impossible to recommend such an unfocused game to anyone. There’s room for a good videogame based on A Song of Ice and Fire, but while A Game of Thrones: Genesis is the first of its name, it never becomes more than an incestuous child born from both media parents.