I don’t recall exactly when management games became unpopular. One day we were mastering the systems of “Theme” this or “Tycoon” that, and almost certainly dabbling in the field of dungeon administration, but then suddenly we weren’t.

So, when A Game of Dwarves appeared, I was pleasantly surprised. Despite the thematic similarities, it’s far more Dungeon Keeper than Dwarf Fortress, focusing more on simpler tasks than the simulation of a colony of dwarfs.

I was optimistic, one might even say excited, as I set myself on the path to rebuilding the dwarf kingdom. Now I’m just a wee bit disappointed. 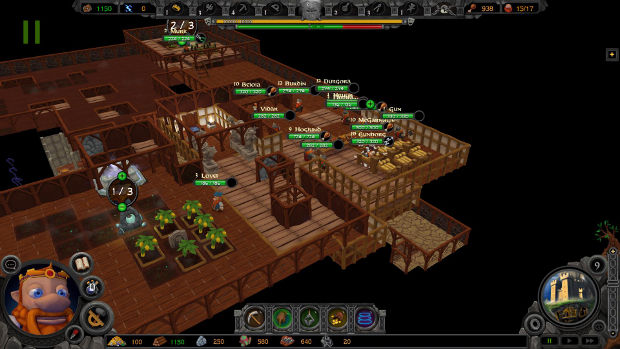 The dwarf prince, work-shy arsehole that he is, was something of a disappointment to his father, the king. Presumably lacking in other, more qualified heirs, the monarch tasks his useless offspring with a monumental quest: to reclaim the old kingdom and defeat a group of ne’er-do-well mages who were responsible for the dwarves’ current misfortune.

The campaign takes the prince and his minions through several scenarios across a map of changing terrain. Underground, however, it all pretty much looks the same. Dirt is dirt, no matter where you travel. Level goals amount to finding objects and defeating mages, while there are also a number of extra side missions that reward players with influence to spend on princely upgrades. The challenge is not in completing the goals, per say, rather it is in maintaining your increasingly messy and hard-to-navigate network of rooms and tunnels, and the wee ginger chaps living there.

Rooms and paths can be carved out by the dedicated miners, one of the game’s many classes, both vertically and horizontally. All the while, other dwarfs craft items and furniture, grow and collect produce and lumber, research new advancements, and train for battle. 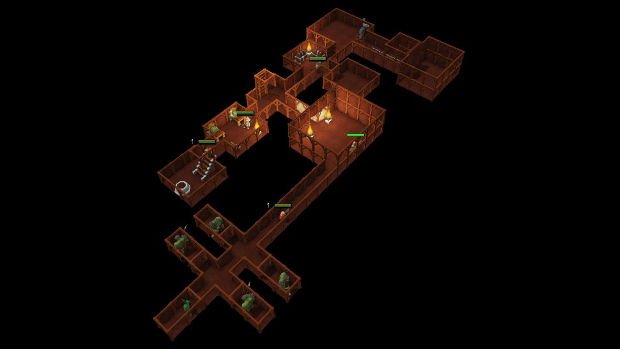 The bulk of the game is spent digging or preparing for conflict, so it’s a shame that neither of those things are particularly enjoyable. Your underground domain is presented on a grid, and much like Minecraft, you’ll be demolishing blocks, creating a settlement filled with right angles and lots of drops. Areas you haven’t mined are pitch black, other than the occasional hidden room hinted at by spinning purple question marks. Everything else is just brown. It’s not much of a looker.

Since the action takes place on multiple levels, it can be a little frustrating to see what’s going on. You can see some of the levels below the plane you’re viewing, but not all of them, and obviously all of the ones above are invisible. When expanding the base, I frequently found myself clicking on the inky darkness next to a room, only to realize too late that I was viewing it from the level above, and my dwarves promptly start to mine in the wrong area. The same annoyance rears its head during item placement, as well. It’s a minor issue, but one that’s a constantly present reminder that the implementation of the Z-axis leaves a lot to be desired — not that I can think of an alternative beyond keeping everything on one plane. 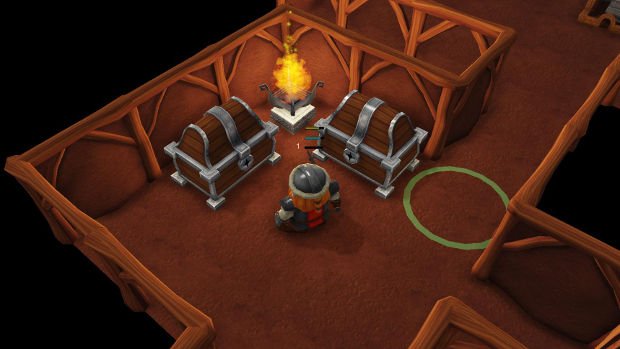 Breaking into one of the aforementioned question-mark rooms usually reveals a bunch of hard-hitting enemies. These foes, be they spiders, goblins, or mages, are a significant threat, and it’s incredibly easy to become overwhelmed. Rather early on, I cottoned onto the fact that there’s only one really solid strategy when it comes to violent encounters: make sure you have a lot of troops. You can train and upgrade soldiers, but when it comes to the actual combat, it is entirely hands-off.

Guard posts can be constructed (by placing a flag) to ensure that troops linger around the areas you want them to, but that’s the extent of your influence. When a battle begins all you can do is cross your fingers and hope that none of your dwarves decide to go for a snack or a nap — something they are prone to doing. Teleporting individual soldiers to the fray is an option, though the ability is on a cool down. It sees greatest use when getting dying dwarves out of the action, rather than into it. Traps are also available, but, while occasionally helpful, they are painstakingly slow to set up and require a vast amount of electricity to power, limiting their effectiveness.

The plot and characters are instantly forgettable, and the tiny amount of voice acting becomes irritating after five minutes. While the dwarves are rather funny looking, and, well dwarves — which is obviously a bonus, because dwarves are wonderful — they lack any real character besides their appearance. Their awful AI and inability to perform more than one simple task makes them unfortunately rather unsympathetic fellows. 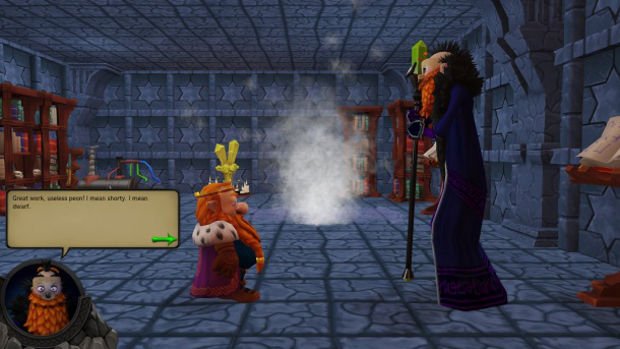 Absent terrible plot and uninspired objectives, the game picks up quite a bit. The custom game mode is not exactly drowning in options, but it does let you limit the amount of monsters being spawned — or remove them altogether — and gives you some control over your resources and such. Unshackled, it actually starts to be rather fun. Many of the aesthetic options are of limited use in the campaign, but when you’re trying to design your perfect cave, they become far more important than boring things like training dummies.

Massive caverns held up by stone pillars, torches and braziers lining narrow hallways filled with busy minions, cluttered research chambers, and suitably ostentatious throne rooms are all yours to build — and once you get the building bug, it becomes hard to stop. Just before the title screen, players are teased with the giant fortress of the king; a settlement far greater than the ones you’ll be constructing early on. Constructing something of that scale quickly became my goal — to hell with defeating the color-coded mages.

A Game of Dwarves is exceedingly easy to get to grips with, and it’s functional, if not as fleshed out as one would have hoped. For those looking for a fantastical management title, there aren’t very many options, and the custom game mode alone will provide hours of exploration and mining, if you’re not interested in the campaign. It’s not a bad game, by any means — it’s just not especially great, either.