Ah, another day, another pixel-art indie game with a Wild West theme. That said, A Fistful of Gun could’ve been set on the Moon and you’d be too busy dodging bullet hells and listening to arcade cabinet music to even notice.

This is a manic game right from the get-go; one that constantly asks you to duel with one hand tied behind your back. As a lone shooter against many, it’s a relentless and daunting challenge, and at this point, I’d tell you grab a posse (or the nearest female cousin, hoo-wee!) to even the odds. Well, too bad the online lobbies are so empty.

They make a desert full of buzzards look like your local watering hole. 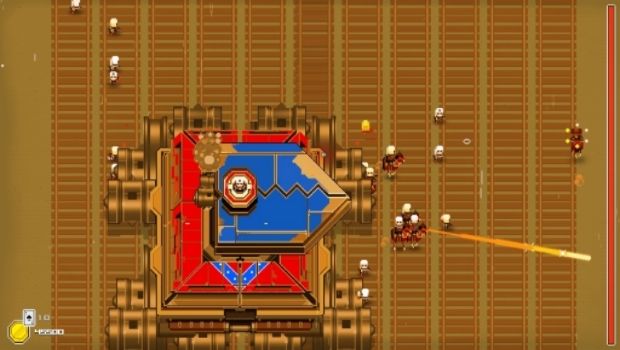 A Fistful of Gun is a bombardment of the senses. It’s your usual post-modern, knowing wink to the camera fare; very loud, very brash, but also raising a smile with its constructive asides and one-liners. So, an evil railroad tycoon has made a deal with the devil, but he’s about to get some karmic retribution from a diverse group of gunslingers. Along the way, these 11 wronged men (well, more than 11 if you count a whole regiment sharing a single horse) will take down anyone who stands in their way – KKK members, bandits, soldiers, Indians, voodoo men, the whole clichéd lot.

And that’s it for the threadbare plot, really. The Story Mode is a marathon of randomised arena-based firefights, each one barely lasting more than a minute or two. Sometimes, you’re given an objective to complete in addition to killing everyone on screen, be it pushing a cart to its destination, duels and assassinations, or saving a hoedown from a stampede, to more loopy scenarios like Peyote trials and Bomb Fiestas. And since you can choose your next challenge, it’s always refreshing to see the variety and difficulty on the player’s own terms.

Graphically, the Western setting is merely functional. Each location has its share of destructible environments, but it all looks intentionally sparse. Being a twitch shooter, you’re required to keep your attention on several things at once: your gunslinger, the bullets headed your way, and the tiny aiming reticule. The pixel art is charming when it’s calm, but when things erupt in spectacular fashion, it’s hard to keep track of the tiny characters and the aiming reticule is usually lost to the earthy colour palette.

A Fistful of Gun is a difficult game, but it does offer plenty of risk/reward strategies in the way of power-ups, handicaps, and character playstyles. Causing havoc in the neutral zones might offer more money or lives, but you’ll also earn a wanted level and choice to either fight a fairly unstoppable Sheriff or take a fairly humiliating challenge like getting through the next level with an unpredictable hog or an explosive piñata on your back. Usually, if you can successfully weave in and out of trouble, you can pick up various whiskey bottles that can slow down time or give you extra damage. Horses give you extra speed and since this is a one-hit-kill kind of game, they allow you a second wind at the expense of their life. 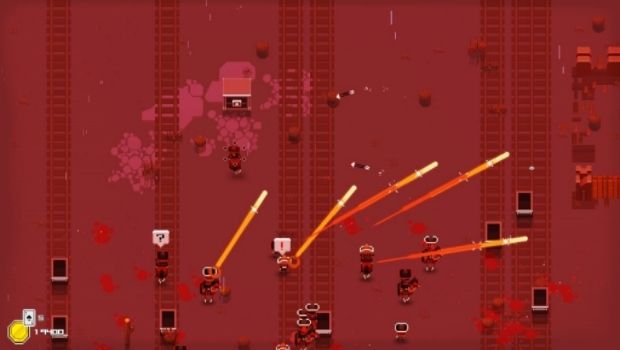 The main gimmick here is the different unlockable gunslingers. Each man has their own unique control scheme or weapon use. So for example, Abel can fire off six rapid shots in a row, but has to reload the whole cylinder before firing again. Virgil’s blunderbuss has to be charged for maximum effect, while Duke has a chaingun at the expense of movement speed, and Billy’s gun can only be fired by pressing the right key shown above his head. Some are clearly more favourable than others, and a select few are there for the added challenge, but nobody ever comes across as overpowered.

While they all have to be randomly unlocked in the campaign, everybody is available straight away in Arcade Mode, and it’s also in this mode that A Fistful of Gun becomes more accessible, more fun. Basically, it’s an infinite gauntlet of arenas, where you’re rewarded with modifiers to take into the next battle – explosive bullets, faster movement speed, better accuracy, etc. But more importantly, it also benefits from having local co-op. 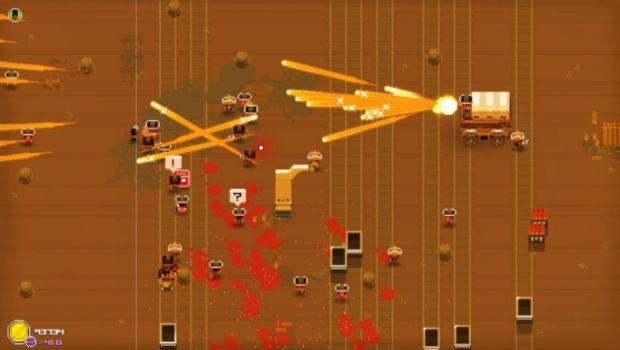 It’s through that brief glimpse of partnership that I saw A Fistful of Gun at its fullest potential. Online is a mix of Arcade and Versus Modes (no co-op SP campaign, sadly) for up to nine players. Though, on launch weekend, the servers were dead. Ideally, it’s played best with a friends list, but if you don’t have a posse to call upon, then you won’t have much luck with public games; not to mention a lack of instant game matchmaking (which is supposedly being rectified in the near future). It would be pretty ridiculous to mark down A Fistful of Gun over a lack of consumer interest, but as a word to the wise and since many of its modes are reliant on co-op, it does currently come across as half a game.

No, A Fistful of Gun’s only major errors lie in its repetitive and muddied action, all blasted through an ADD pacing. It’s still fun and humorous, but that relentless nature condenses its longevity into just a couple of sessions. If you’ll pardon the ham-fisted metaphor, A Fistful of Gun can best be described as a stick of dynamite with a short fuse; explosive and disposable in the brief time you’ll spend with it.