[Disclosure: Nick Chester, who is currently employed at Harmonix, previously worked at Destructoid. As always, no relationships, personal or professional, were factored into the review.]

It’s a weird time to be Harmonix. It is hands down one of the most successful and influential independent developers of all time. It led the development and popularization of an entire genre of games over the last generation; who else can say that? At the height of its power, the company released a near-perfect game with Rock Band 3, and it’s still just about the only studio to have ever done right by the Kinect.

But times change, the rhythm-game craze is over. All of those plastic instruments Harmonix built its name on are gathering dust in closets or bargain bins, and the masses openly celebrated when Microsoft took the Kinect out of the box. So what is Harmonix to do? 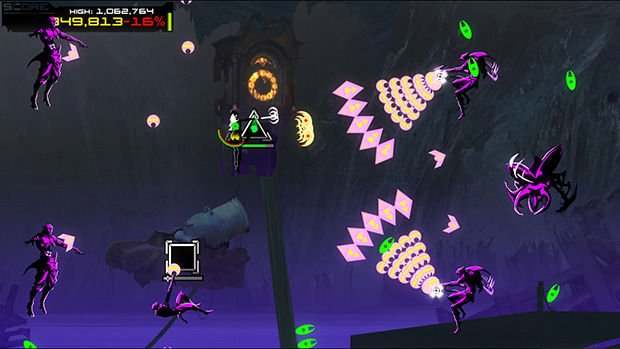 A City Sleeps is an experiment for Harmonix, and it very much feels like it (with all the good and ill that implies). While the side-scrolling arcade shoot-’em-up genre is a total departure from its previous body of work, the studio’s fixation with music remains present as ever, cleverly blending the action on screen to the soundtrack.

Both the player and the enemies fire in time with the music, creating a synesthesia-like experience of sensory interplay; listening is often as important as watching closely, and getting into the rhythm of the soundtrack can mean the difference between successfully anticipating attacks and being in the right place at the right time, or dying a clumsy embarrassing death.

More than any other shmup I’ve played, when it’s at its best, City encourages the sublime trance-like experience of total concentration that enthusiasts of the genre know and love. Which is why it’s a shame there are so many small annoyances and flaws that will frequently, and rudely, snap you out of that hypnotic state. City casts the player as Poe, a sort of dream-exorcist who is able to dive into the sub-conscious minds of others and purge them of their personal demons.

The game is set in a super-slick techno-future where the line between “person” and “personal computer” has blurred to a point of non-distinction. The dreamlike imagery focuses on that tension, calling up visions of ruined cities, clockwork machinery, and teaming insects representing the hivemind grid the entire population is plugged into. The soundtrack alternates between the synthy-electronica of living inside a computer and sombre, ambient sounds that bring to mind isolation and disconnection. It has a great, hip futuristic sensibility reminiscent of Transistor (always a good thing).

Sadly, those interesting visuals are as much a stumbling block as an asset. Each screen is cluttered with a barrage of visual information. Dull, frequently static and unanimated enemies get lost in the backgrounds, often colored too similarly to stand out against them. Enemy fire and obstacles dissolve in a mess of sheer sensory overload, with too many competing colors and flashing lights assaulting your eyes at once. It’s frustrating to constantly smack into unseen attacks even after replaying a Dream several times over.

Adding to the visual clutter are the Idols, a key gameplay mechanic unique to City that sets it apart from other shmups. As a dream-exorcist, Poe has a collection of helpful Ghosts that can be plugged into Idols, large floating, abstract objects such as statues or railway cars, to provide various support effects also in time with the music.

You start with the Ghosts of Anger and Mercy, which act as an extra damage dealer and a healing fountain respectively, and unlock more exotic options as you complete the Dreams on higher stages of difficulty. Poe can only carry three Ghosts at once and each Ghost has two different functions depending on what type of Idol it is slotted into, creating a variety of tactical choices to consider.

While offering an intriguing element of depth, the Ghosts are also visually overwhelming. The Idols take up a massive amount of the screen, and when active, emit a large colored highlight around themselves, as well as spew out whatever effect the Ghost is producing. The screen is soon dominated by colossal shock-waves, a smattering of orbs, and tons of other visual garbage that betray not only the cool aesthetic of the title, but the ability to proficiently play it. The Idols and Ghosts are a fantastic idea, but the execution leaves a lot to be desired. 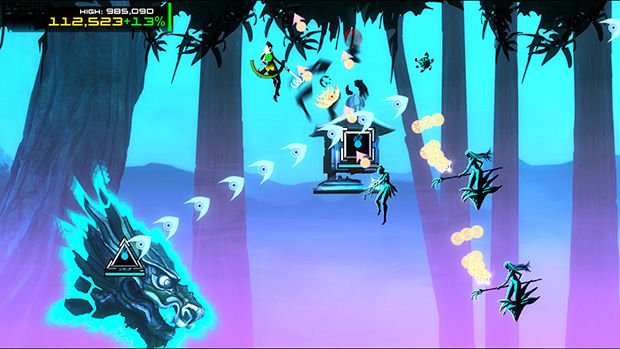 Difficulty is always a personal thing, especially in a niche genre like shmups that tends to cater to a hardcore, specialized audience. I consider myself a shmup enthusiast; while I’ve never 1-CCed a game, I’m in deep enough to know and care about what a 1-CC is (clearing the game on a single credit or continue for the uninformed out there). I can safely say, this game is hard (and not in a fun way).

There are five stages of difficulty to play through, and the curve is severe. City is unsatisfyingly breezy on the lowest difficulty setting, but quickly escalates to near-impossibility. The confusing visuals are compounded by slippery controls that don’t respond quickly or accurately enough to deal with the lattice-work of death you’ll frequently contend with. Furthering the frustration is Poe’s anemic firepower, that is often unable to defeat larger enemies before they simply wander off after torturing you for a while.

I eventually managed to beat all three Dreams on the forth difficulty setting and two of them on the fifth by the very skin of my teeth (from the leaderboard information, it seems only one person has conquered the most demanding Dream on the highest difficulty at the time of this review). While hardcore shmup nuts will appreciate the challenge, many players will likely find themselves stymied and unable to progress deeper into the game.

This is doubly frustrating as City locks alternate Ghosts and passive upgrade Relics behind successfully completing higher difficulties. These Ghosts and upgrades offer some of the coolest mechanics in the game, and in many ways seem necessary to enjoying it. 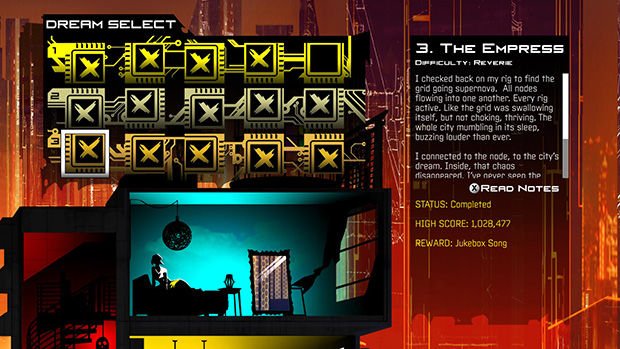 For example, the Master Ghost and its associated Relic allow you to apply devastating damage to enemies through skillful, and risky, screen positioning based on where you are relative to the possessed Idol. It’s a great mechanic. On one hand, it adds another layer of strategy and thought onto an already hectic and stressful situation, but if you use it right, you’ll be able to eliminate enemies before they can overwhelm you. It quickly became my favorite tool.

Handy as it is, some players might not ever be able to unlock it, and this seems to be a constant theme. As you progress you get speed-boosting passives, an upgrade that makes the healing Ghost substantially more effective, and damage perks that all combine to offset much of the earlier frustration. It’s understandable that Harmonix wanted to include some element of progression and reward for tackling the bigger challenges, but it seems like all the best toys are hidden in the back-end of the game, past the point where many players will likely throw up their hands and uninstall.

Adding insult to injury, you can take those unlocked Ghosts and perks back to earlier tiers of difficulty. So players stuck at one point can’t even amuse themselves trying to crack the leaderboard. A player that has unlocked all the goodies can just circle back and ace those difficulties to a degree that’s impossible to compete with if you only have the default loadout.

There are only three Dreams and three interactive soundtracks to enjoy. While the higher difficulty levels do offer some degree of replayability, it’s hard not to feel left wanting by the paltry amount of content available. It feels like the game is just starting to roll when you hit the credits, the record scratching to a sudden unexpected stop. 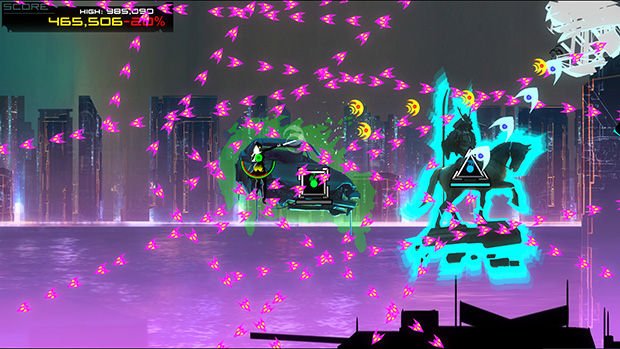 The whole experience is frustrating, because there is a genuinely cool game hidden somewhere in there. As an examination of other ways to apply rhythm and sound to gameplay mechanics, it is a solid proof of concept. There were moments while I was playing it that the world around me seemed to fade away and I didn’t even think about the controller in my hand. But then I’d hit one of the many snags, die another frustrating unfair death, and the experience would be soured.

A City Sleeps feels like a half-made game. Perhaps if they had a little more time or budget to add a few more Dreams, and even out the experience for players of all skill levels, it might have been something special. As it is, A City Sleeps is strictly for hardcore shoot-’em-up fans and people who are intensely curious about the future of rhythm games (an interesting Venn diagram for sure).